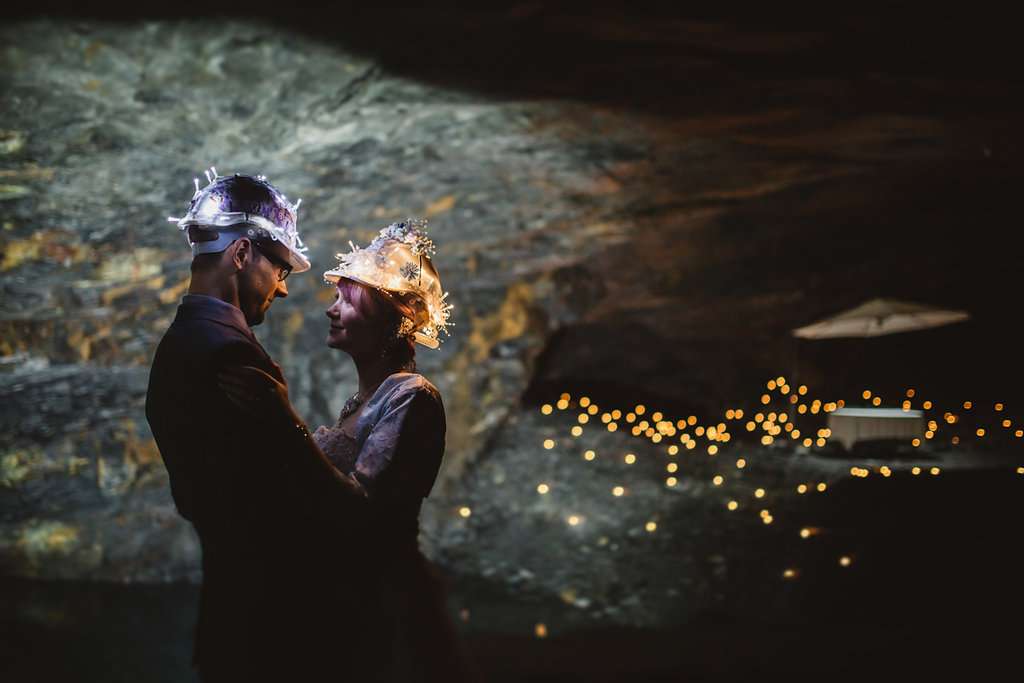 I doubt many of you will have seen a wedding venue quite like this before because Ellie and Charlie got married in a cave! More specifically at the Underground Lake in Carnglaze Caverns, Cornwall. They also didn’t tell their guests where the ceremony was going to be held beforehand.

“We wanted our wedding to be a journey of discovery for our guests”, said the bride. “We asked them to dress to a certain colour palette and suggested they have fun with what they wore such as incorporating fairy lights or creating an animal mask!” 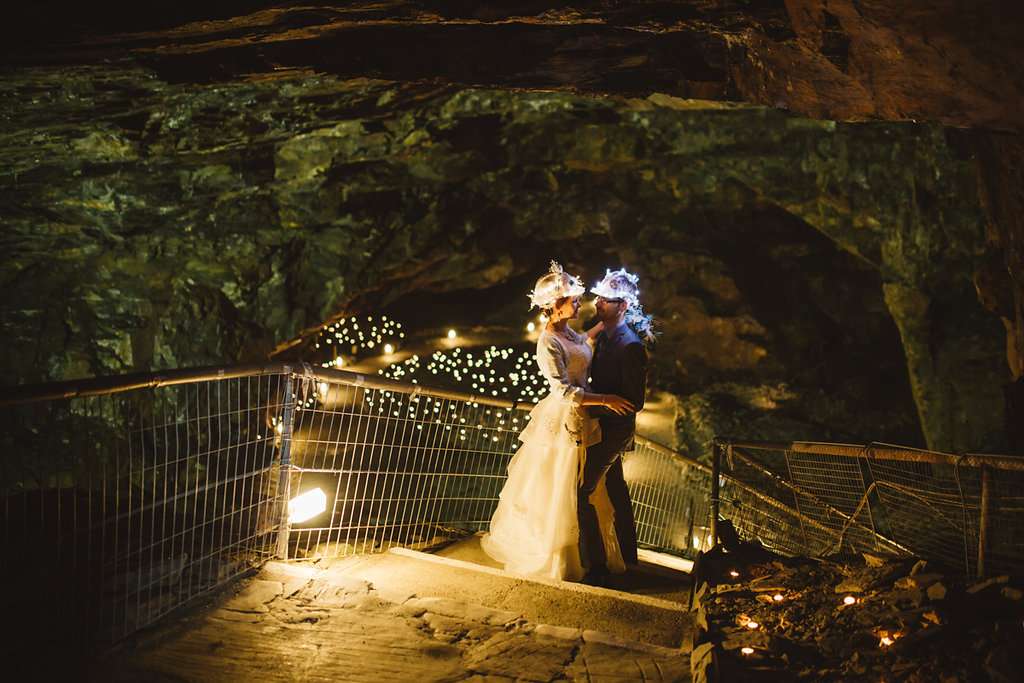 “On the day we set them fun tasks too. The first was to help us make the food for the wedding breakfast (we have some very talented cooks in the group, we would have hated to have wasted that!) and secondly to decorate their hard hats for the ceremony. At this point they were all still unaware of the location of the ceremony (although they may have had their suspicions from the task) and would only find out where it was upon their arrival by taxi.” 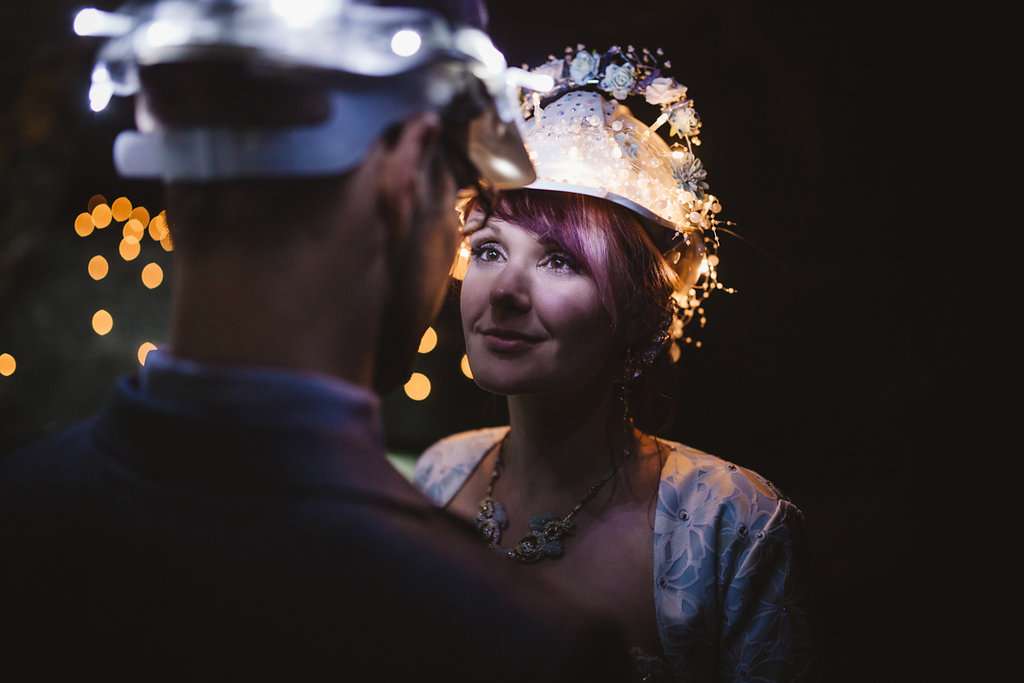 Of course the most impressive outfits had to be worn by the bride and groom themselves. They both customised what they wore. “My dress was made extra sparkly with beads, sequins and crystals sewn into it and I had a friend make me a jacket to keep the cold off in the cave. I made my bouquet from wire and beads and also all my jewellery. Charlie wanted a suit with interesting material, but failing to find anything suitable we asked my brother if he could draw some of his fantastic illustrations of animal skulls, flowers, butterflies, moths and geometric shapes on to it. The finish was incredible and it really went with the whole feeling of the venue and surroundings.” 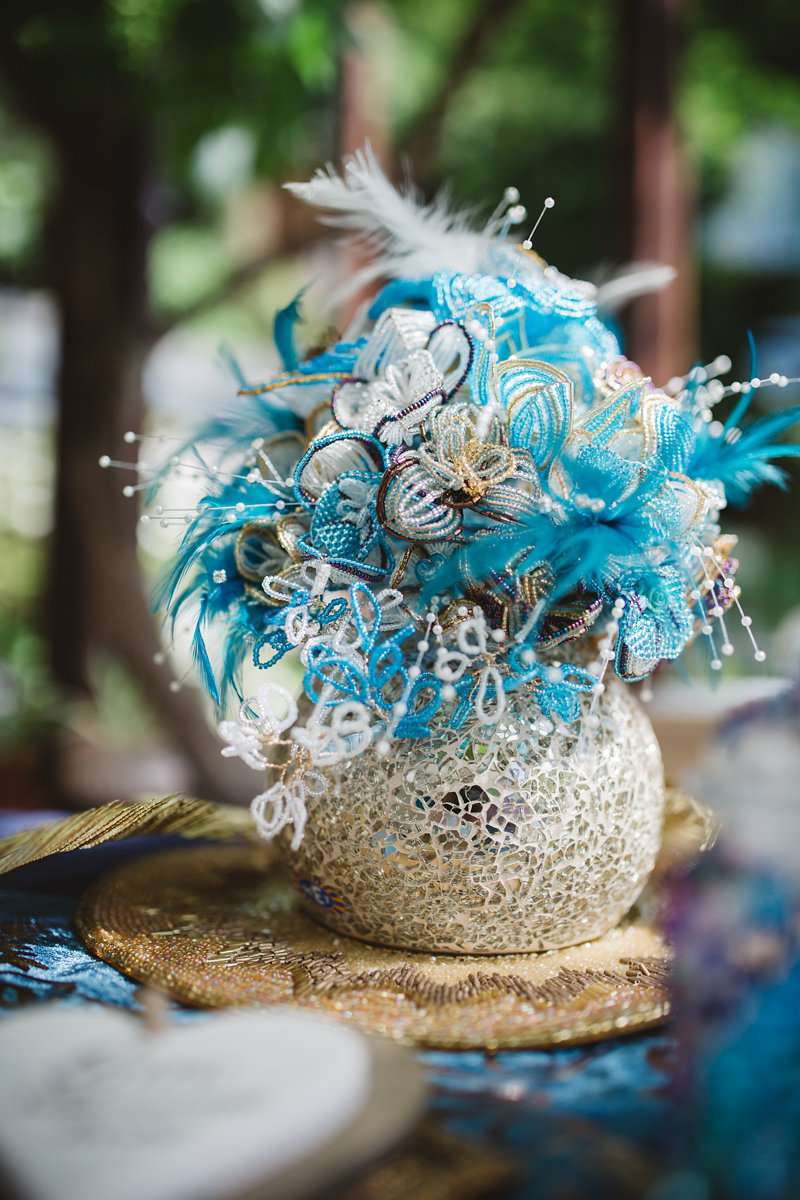 “The ceremony itself was magical. Well we chose to have it at the Underground Lake because we wanted somewhere of natural beauty that felt other-worldly and ethereal. When we first went to visit we knew immediately it was for us as it was so tranquil and magical. We really wanted a venue that didn’t need decorating or dressing-up as it was already an incredible space (apart from a few hundred tea lights to make it super romantic!)” 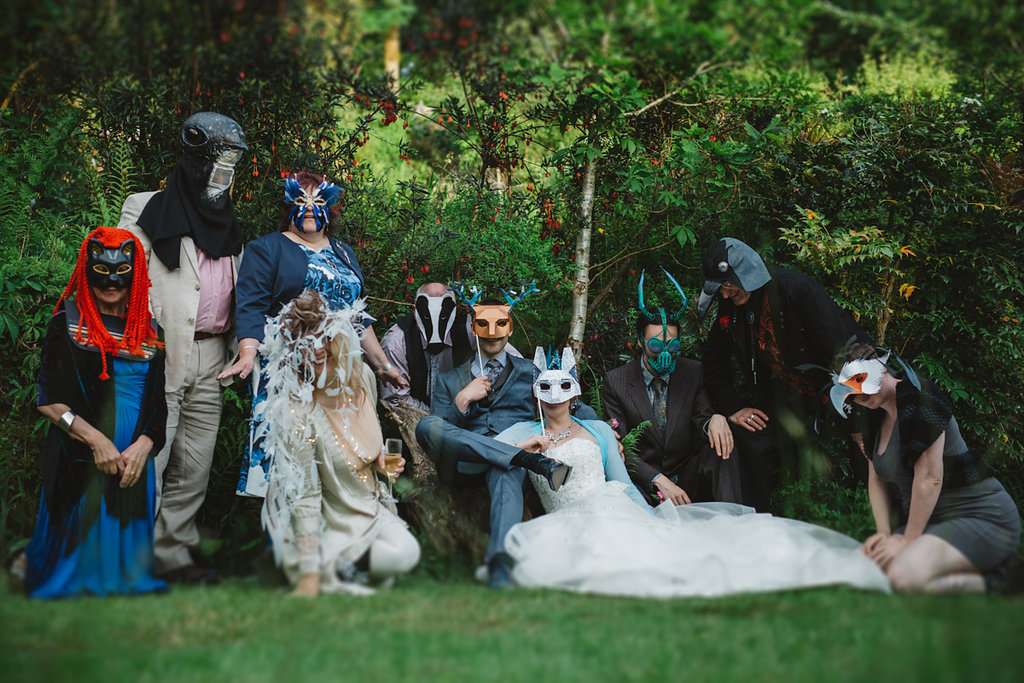 “When the time came, the guests went in first and spent a few minutes having a look around and taking in the magic of the space with a few tracks from Blazin’ Fiddles playing. Charlie then had a stroll down the 60 slate steps in his blindingly bright helmet to a John Hiatt track and then I made my entrance down the steps to Imelda May, escorted by my dad. We had the ceremony next to the bright blue underground lake. We had written our own vows which were inspired by Jack and Sally’s song from A Nightmare Before Christmas. We had a reading of The Lovely Love Story by Edward Monkton and I Carry Your Heart With Me by EE Cummings.” 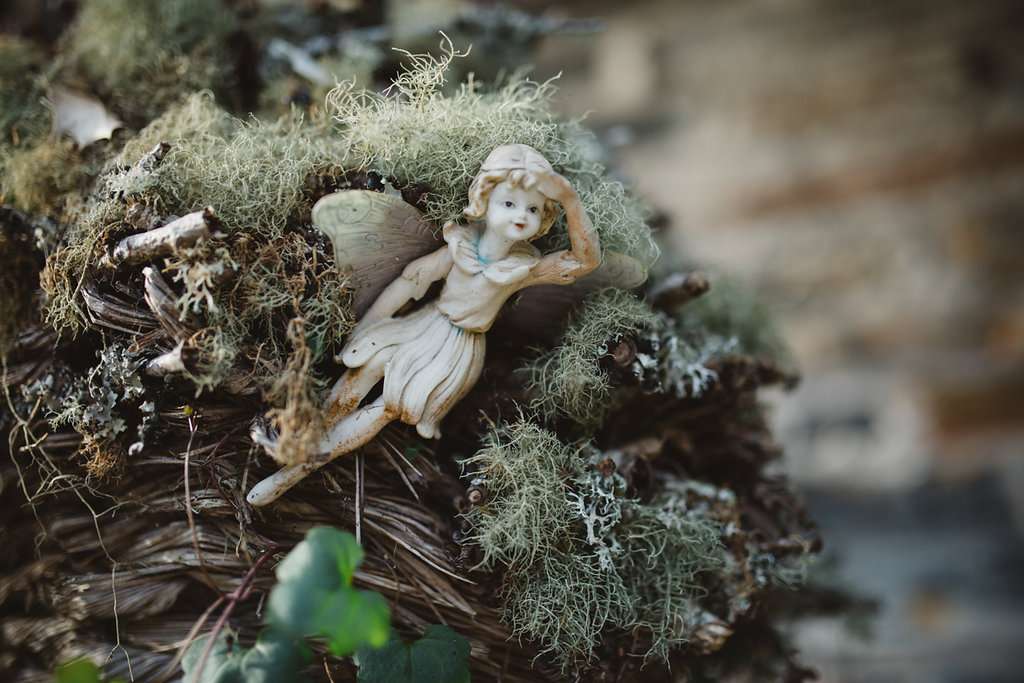 “The amazing thing about having a small number of guests and this venue was that the furthest person away was only a few meters, so I could really take time to look at them, share the moment and strengthen the memory. Well that’s what I tried to do but everyone was blubbing so much they were avoiding catching my eye!” 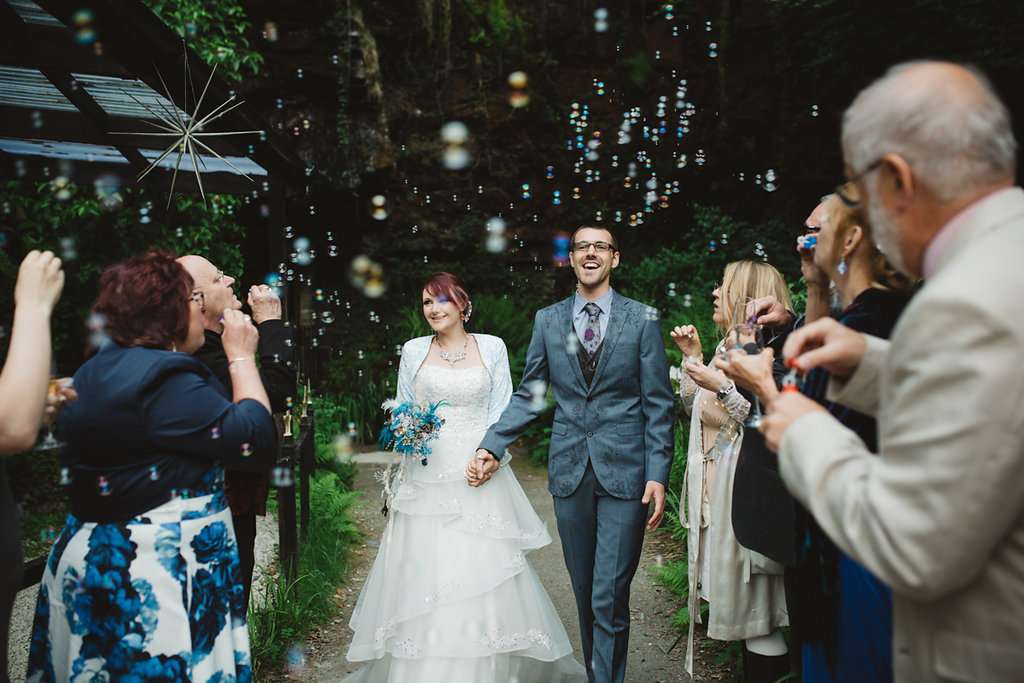 “Another one of the highlights from the day was when everyone put their masks on. The level of effort that went into the design and making of them was incredible! We had a few group shots with the masks on and then Jo (our photographer) said that everyone could move, which somehow got misinterpreted by everyone as ‘walk around like your animal and make the appropriate noise!’, it was hilarious, especially seeing Charlie’s dad crawl around on the floor in his badger mask making snuffling noises! We then proceeded to trample through the gardens and woodland in a disorganised and slightly mad Shakespearian play!” 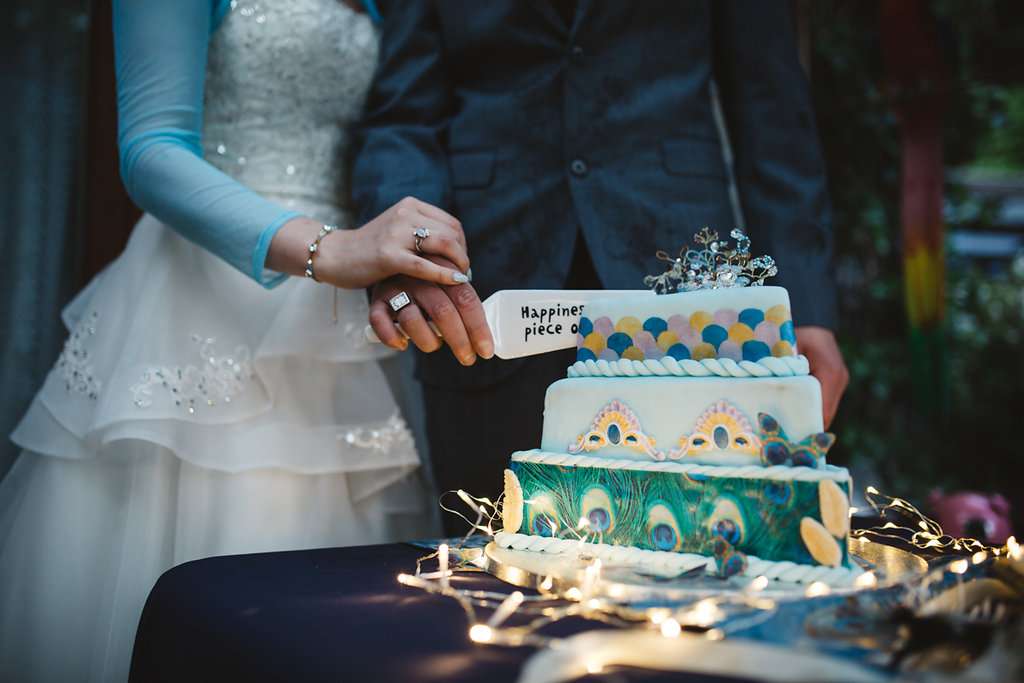 “The best thing about planning the wedding was having complete freedom to be as creative and bonkers as we liked. We had a very small guest list and everyone know us really well. We didn’t feel we had to tick the traditional boxes and we loved being able to be spontaneous. Also, being able to make a lot of stuff and learning new skills was really enjoyable and let us add a very personal element to the whole shebang!” 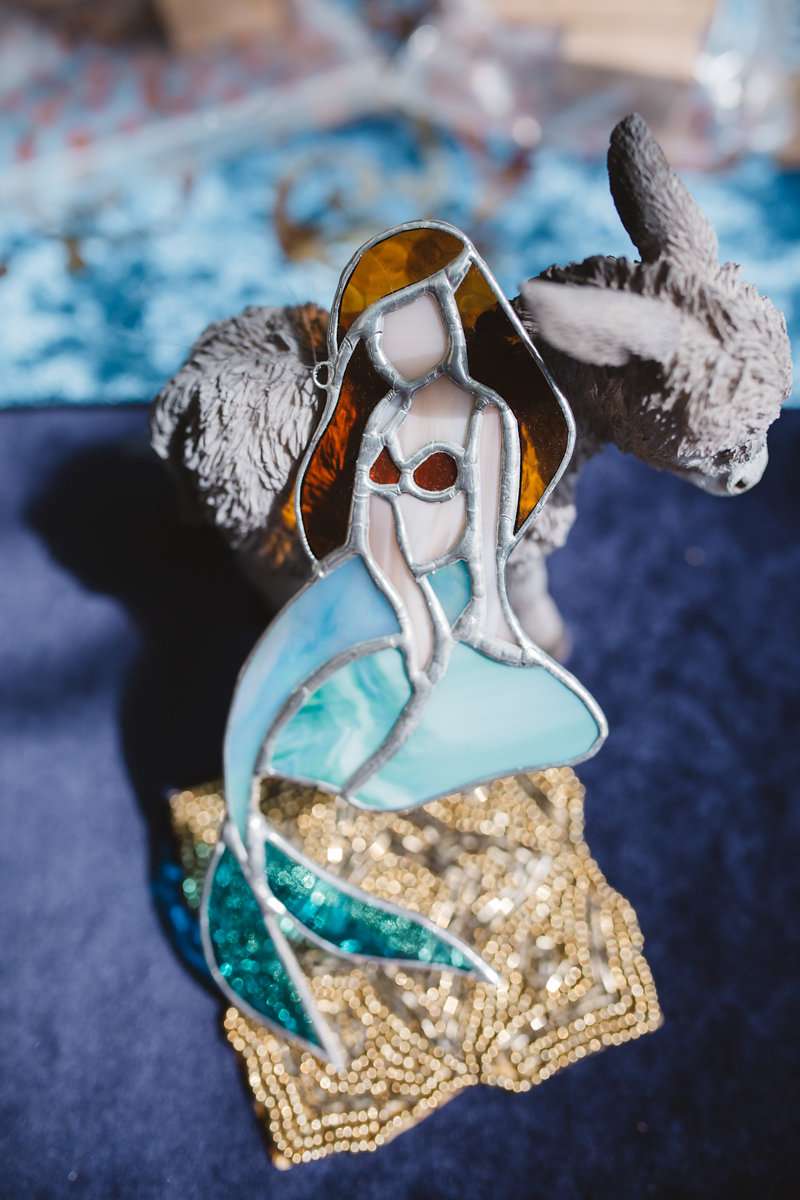 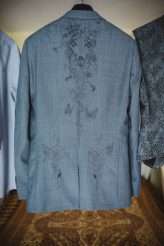 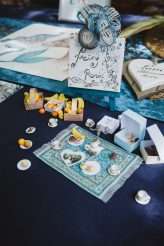 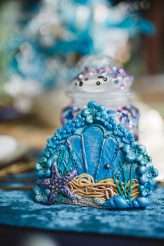 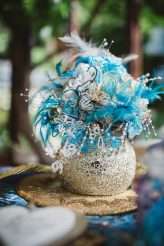 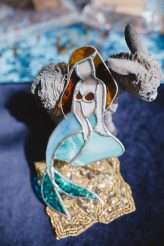 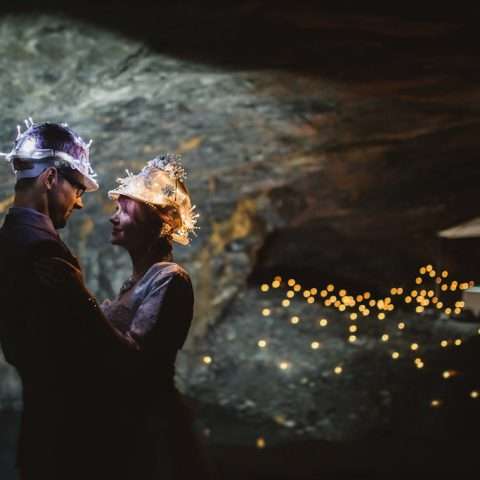