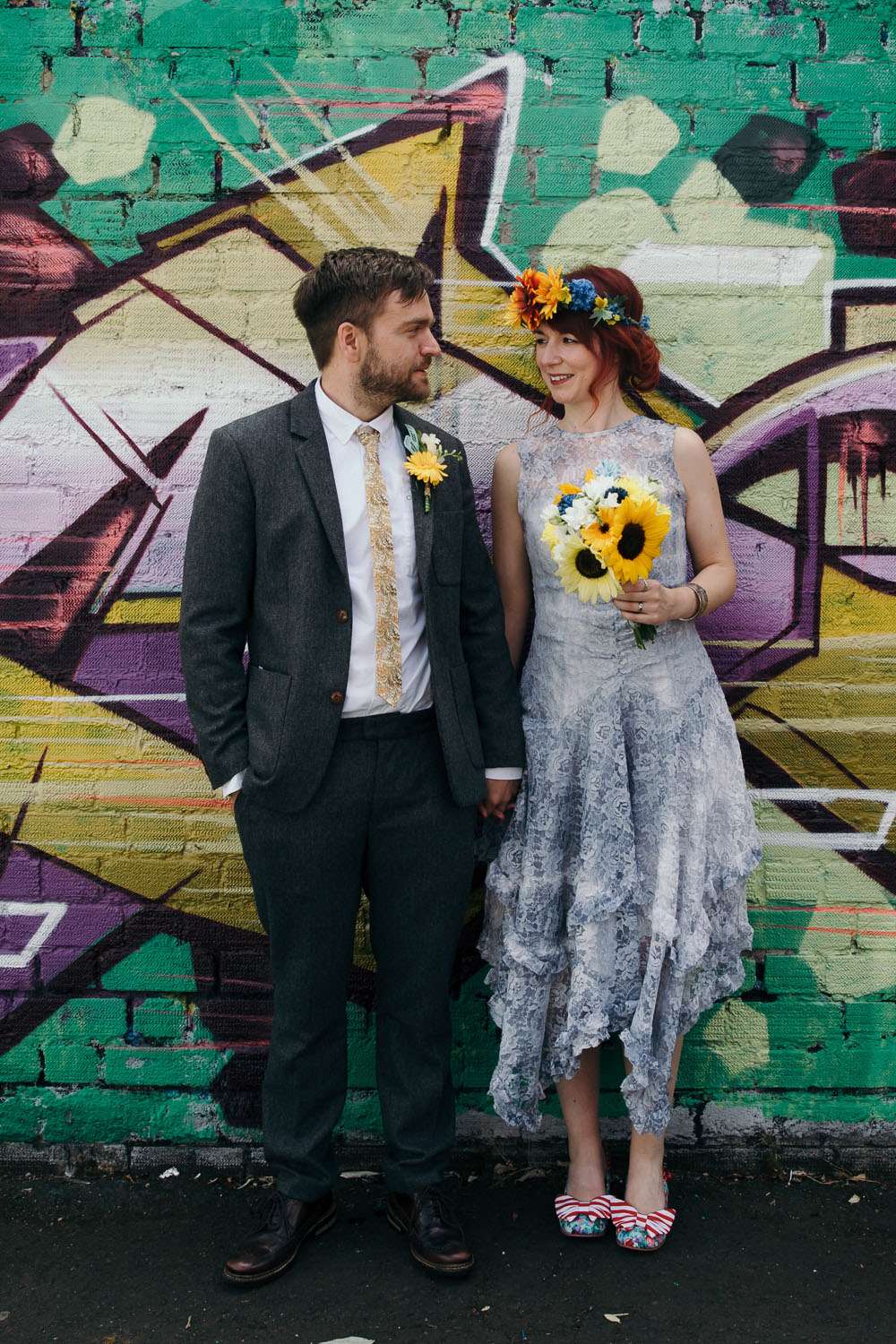 Jenny and Steve were married at The Electric Cinema, the UKs oldest cinema, in Birmingham. “We’d have loved to have a festival style wedding”, said the bride. “We love going to festivals, seeing live music and I’m a big hippy at heart. However due to our budget and in the light of keeping things simple and as stress-free as possible, we had to ditch this idea.” 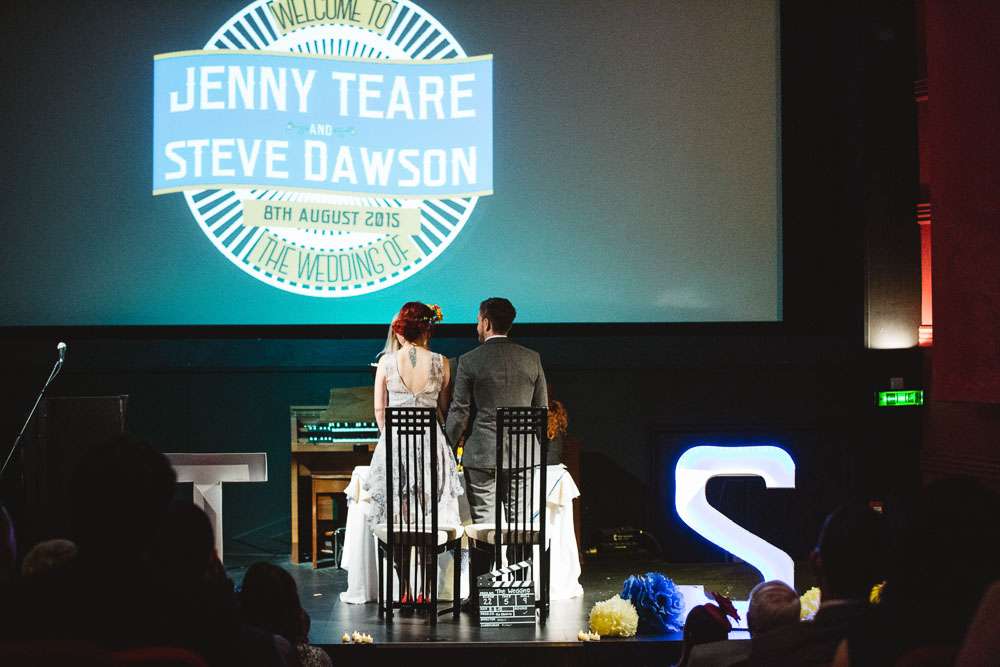 “It was really important to me that we handmade as much as we could. I’m pretty thrifty and I love making and creating! We are Brummies through and through and it made perfect sense to us to have hold our creative wedding in the heart of our fair city. Our wedding definitely had a 70s vintage vibe with my vintage dress, the flower crowns, sunflowers, bunting and camper van.” 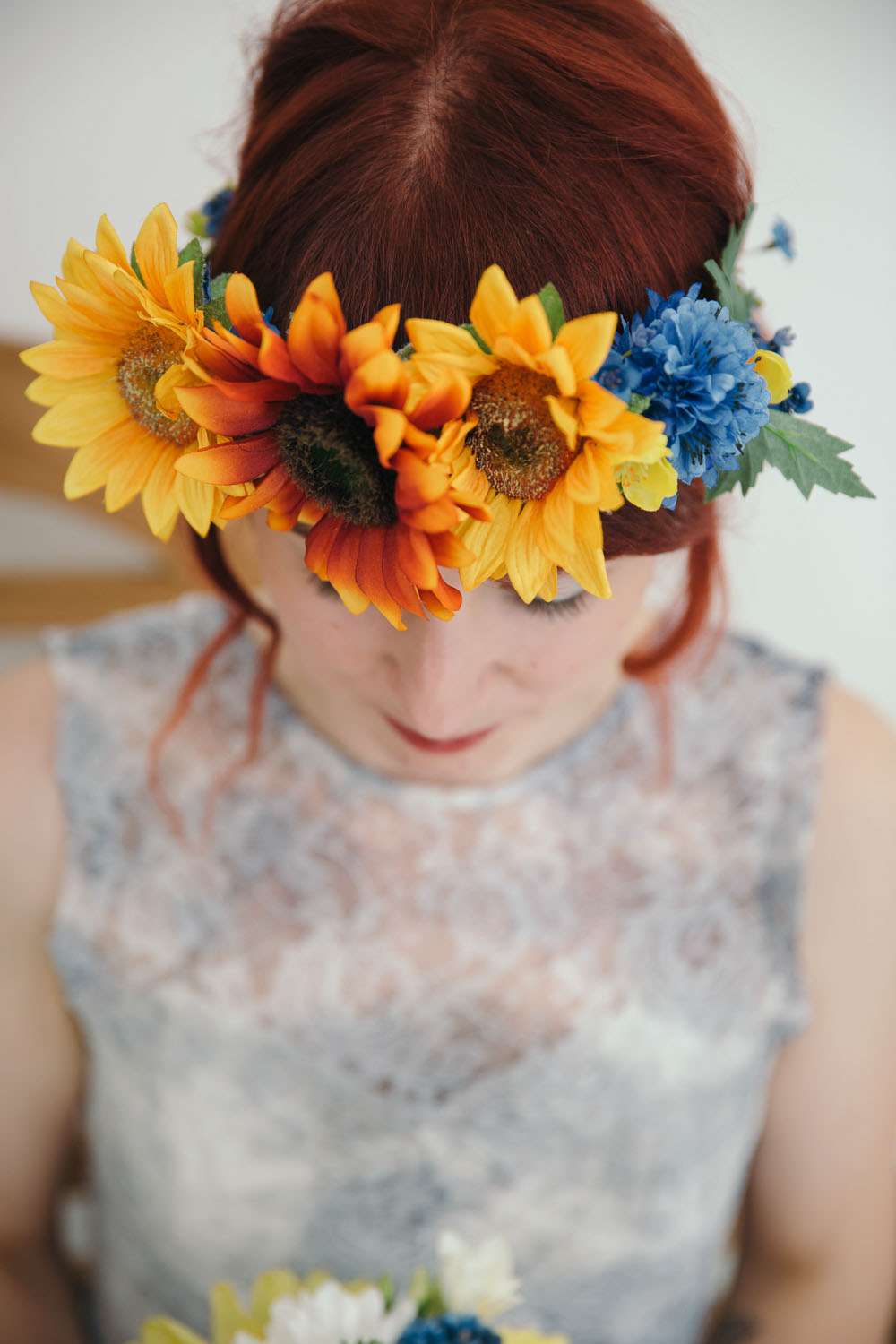 “Having our ceremony at The Electric Cinema let our guests know from the get go that was wasn’t going to be a ‘traditional wedding”, she continued. “I was sure I was going to cry, I’m such a crier normally, but I kept it together. I walked down the aisle with my dad to Led Zeppelin’s Rain Song as we are both huge fans. When Steve whispered in my ear ‘you look beautiful’ that was it, couldn’t stop smiling. I was really worried about being the centre of attention but it isn’t a ‘crowd of people’ you are standing in front of, its all your family and friends! Our friend Claire did a reading and as we were signing the register we had a clip of our favourite film, Amelie, playing on the big screen behind us.” 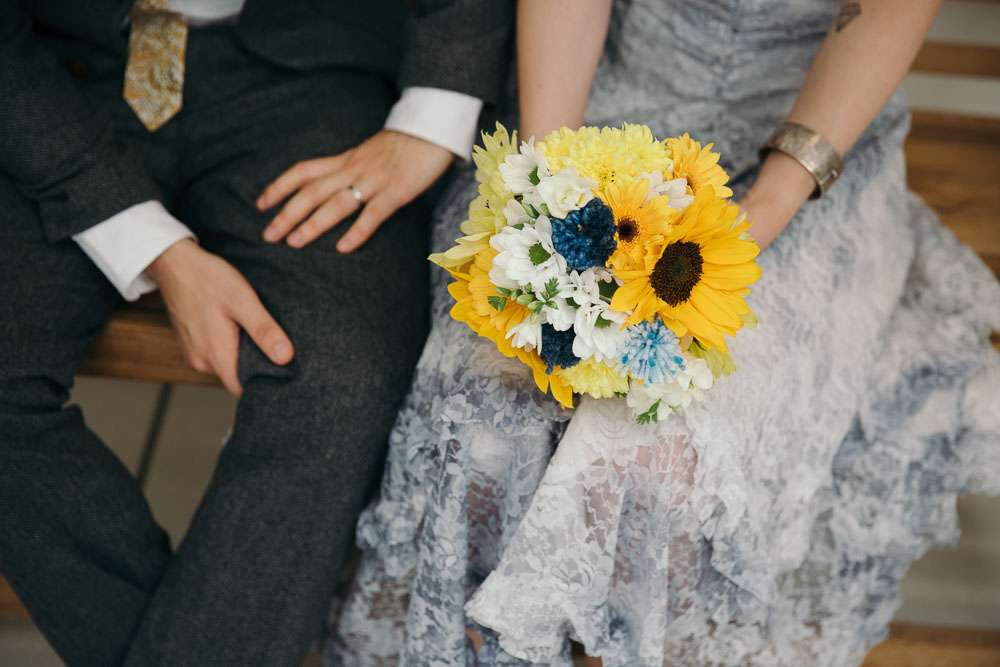 After the ceremony, they headed to Cherry Reds, a cafe and bar, for their reception. “There was lots of DIY. I handmade the flower crowns, the bunting, the groom’s party ties, the paper pompoms and the wooly pompoms with help from the mother. My friend Juliette did the flowers and cakes. My dad made us our giant light up J and S letters and Steve made our stationery and put together the playlist. We tried to get everybody involved by sending out sunflower seeds with our invites with the idea to grow the flowers and use them in the wedding. Unfortunately our dodgy summer didn’t prove fruitful. I did manage to use a couple that were grown in my own bouquet though.” 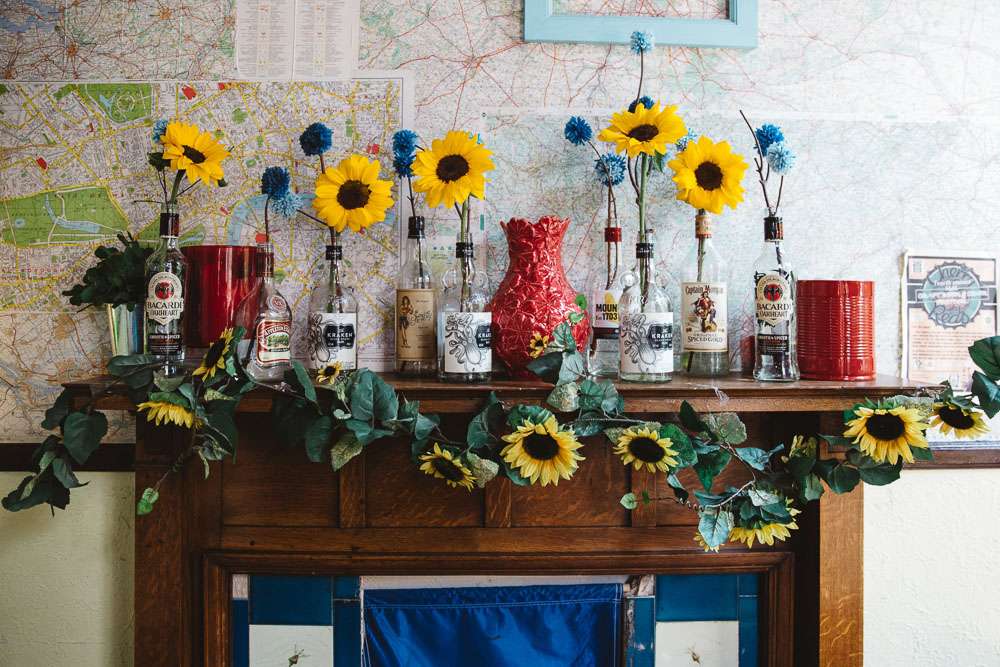 “My favourite part of the wedding was seeing everybody so happy and enjoying themselves”, she concluded. “I was so worried about everyone else, mainly the older generation, having a good time. We got some funny looks and a lot of questions when we did reveal our plans to some people. However we much stuck to our guns and planned the wedding we wanted and it all paid off in the end. Hearing afterwards that everybody had such a great day, as much as we did, meant a lot.” 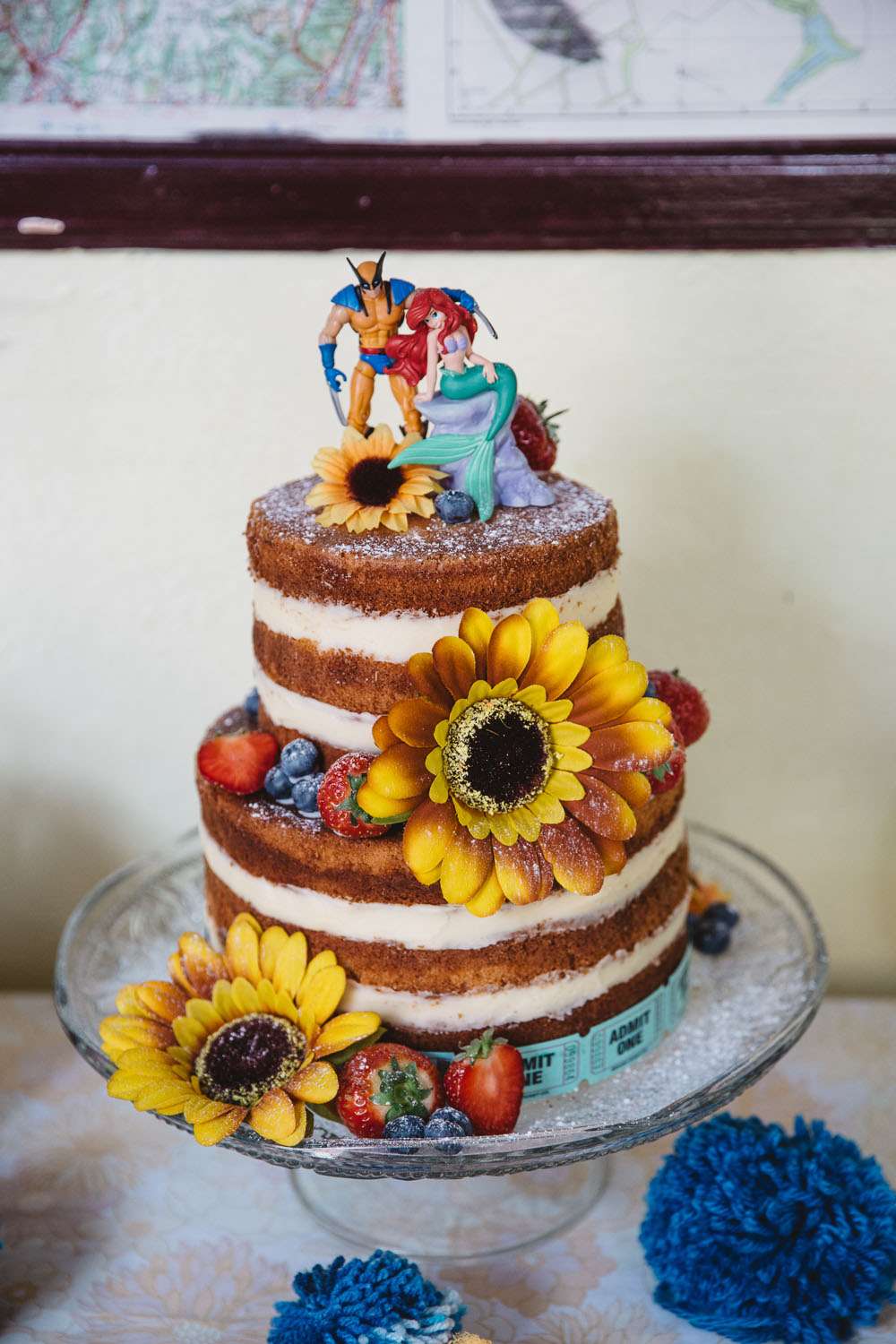 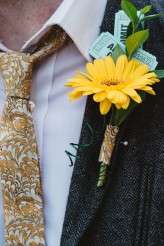 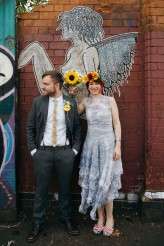 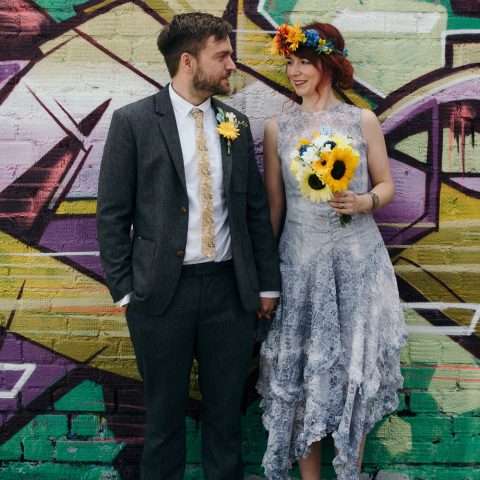 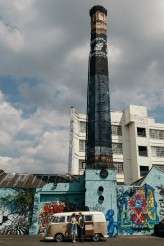 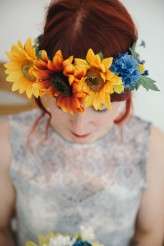 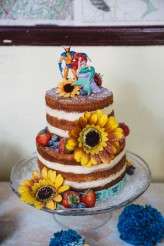 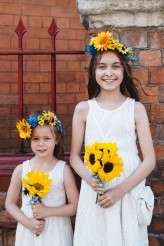 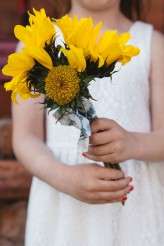