London dwellers Emma and Jason decided to marry at Les Noes Blanches, a gorgeous private hire château in Loire Valley, France. The 450 acres of gardens and private estate made for the perfect setting for their intimate vintage inspired wedding.

“The main theme was the 1920s”, said Emma. “Our colour scheme was white, black and gold but we also gave the day a modern twist. We took  cues from art deco and stripped it back to clean lines, and added a softer colours through flowers. The rural French château itself suited our theme too as it was white, clean and unfussy. We removed anything from the wedding that didn’t speak to our core values and we jettisoned anything that is just hanging on for traditions sake. We considered what was important to us, and tried to transmit that with each element.” 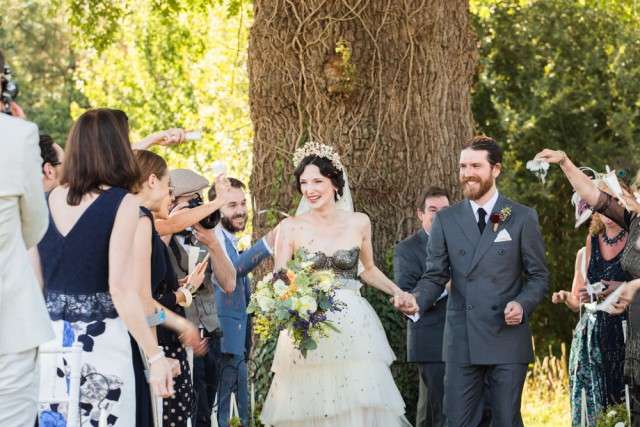 “While these were our primary sources of inspiration, I spent a long time scouring the Internet for ideas, and anything that made our hearts sing was appropriate”, she continued. “We also wanted a mystical and spiritual nature at the wedding event. I wore a gold Vesica Piscis temporary tattoo from Danielle Laporte representing the union of god and goddess. The pointed oval at the centre of the sacred geometric pattern is also said to represent the divine feminine. This was something that was really important to me as a woman.” 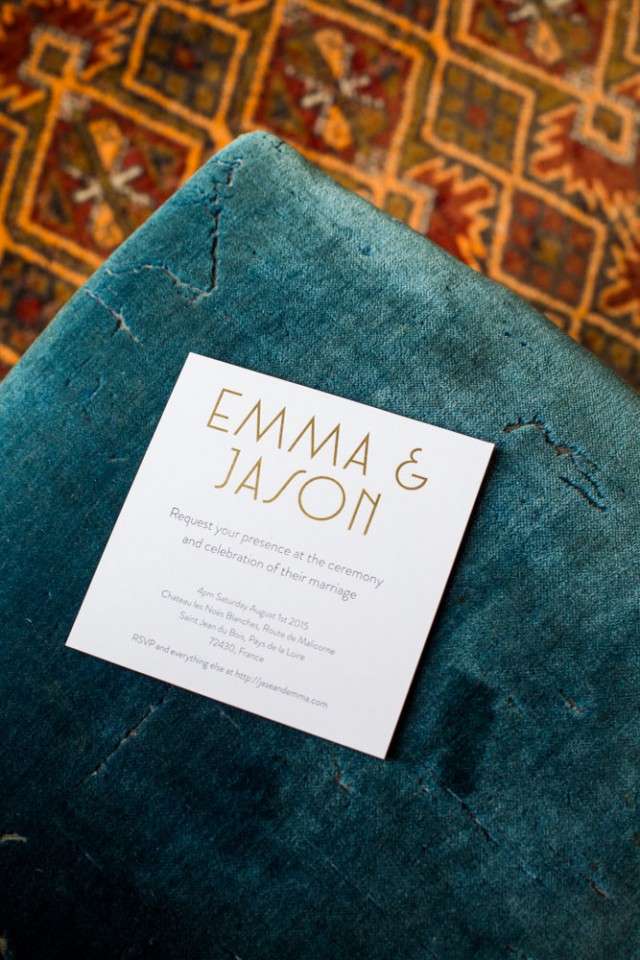 Their ceremony took place outside and was conducted by Jason’s friend and spiritual guide, Alan Chapman. “It was based on our joint held believe in equality, oneness, truth and freedom”, Emma explained. “It was so deeply personal and everything about it was done the way we wanted. We created our own traditions. The ceremony and saying our vows was the best part of the day. That moment was holy, sacred, magic and divine. I never knew what limitlessness felt like till that moment, saying those vows, and looking into each others eyes.” 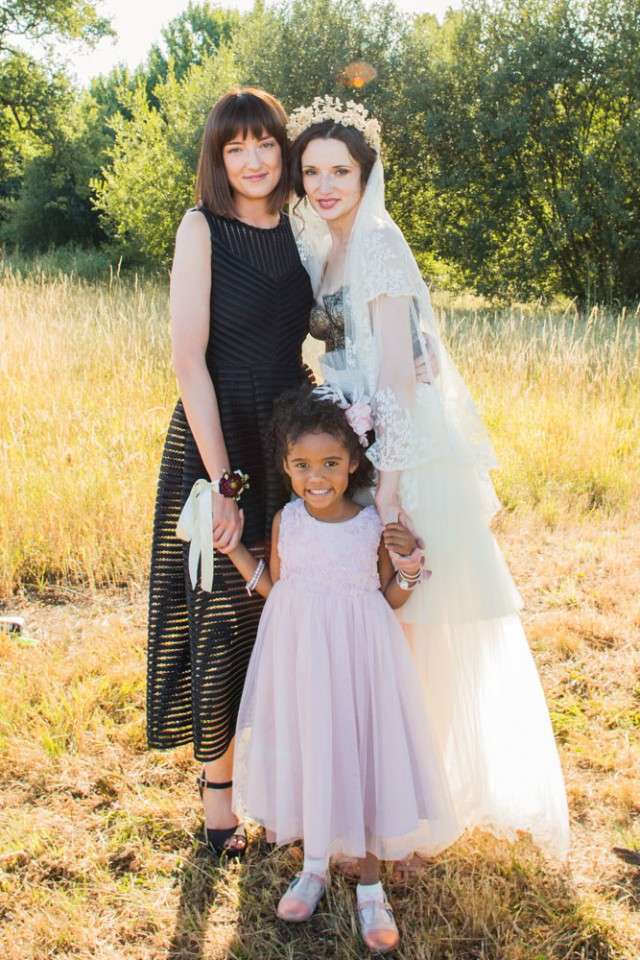 The bride wore a corset from Agent Provocateur with a tulle skirt made for her by a friend who is a designer. Her ceremony headpiece was an antique wax crown from the 1940s and her amazing veil was made in 1890. After the ceremony she changed into a Jenny Packham crystal headpiece which she rented, instead of bought, in order to save money. “Having my dress made for me by my incredibly talented (genius!) designer friend was one of the best things about planning the wedding. It’s not every day you get a couture dress and I really did feel totally beautiful, and like myself (most importantly).” 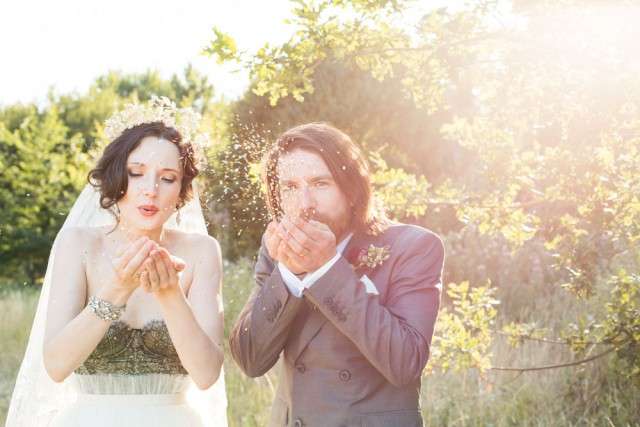 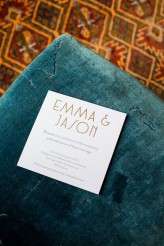 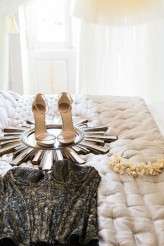 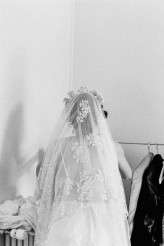 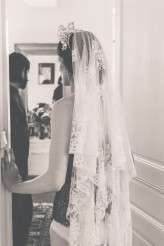 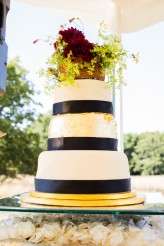 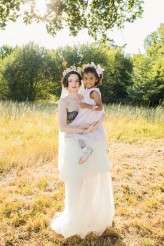 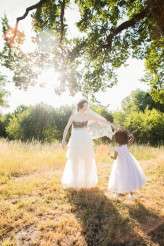 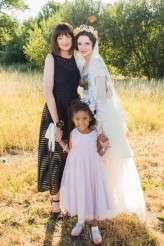 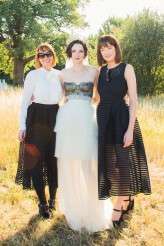 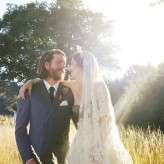 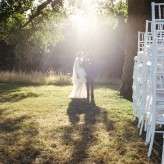 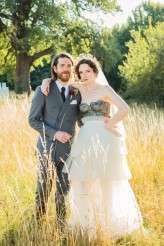 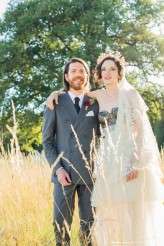 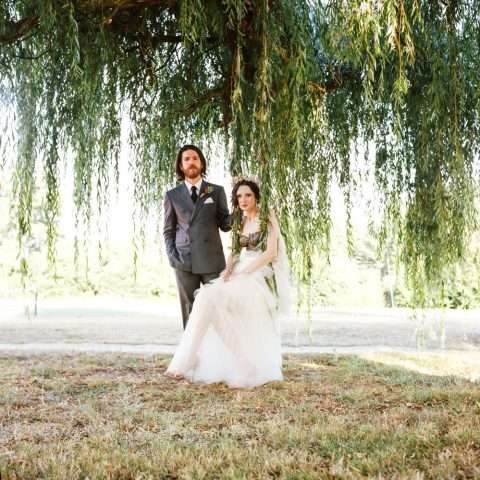 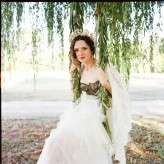 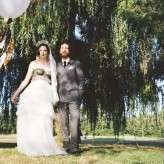 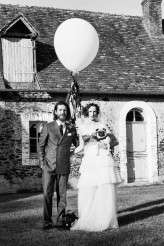 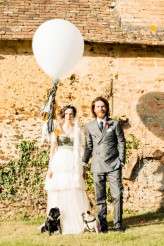 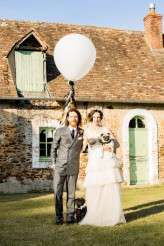 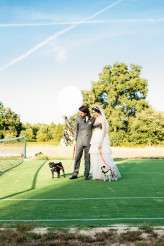 With a penchant for all things glamorous and retro, it was no wonder that Angie & Brian had the wedding that they did. The bride, a burlesque dancer, and the groom, a jazz trumpet player for Lady Gaga, wanted a day that truly reflected the things that they love. They didn't just want to plan a wedding - they wanted to put on a show! The wedding was held at Grand Prospect Hall, Brooklyn.

Not all Rock n Roll weddings need to be epic DIY extravaganzas, rainbow heavens or tattoo-fests. Sometimes it's just the fact that two people, madly in love are saying "I do" in their own unique way. That's exactly what Jeanne and Lawrence did in August this year.

Rosie and Colin live in London but wanted to get married in Scotland, where Colin is from. They took inspiration from lots of places for the theme, but the three key elements were skulls, Scotland and vintage 1920s touches.

Heather and Jeremy had a distinctive 1920s vintage theme for their South Carolina wedding. Held at The Farm at Ridgeway, the Friday wedding was a true labour of love, with the bride hand crafting and collecting nearly everything herself. She scoured thrift shops and antique stores and got a lot of things from Etsy.

Lauren and Cory's whimsical French circus wedding theme came from the bride's imagination. She wanted their wedding to be quirky and fun, yet timeless and elegant. "I wanted to keep everything as organic and simple as possible but with a slight nod to the oh-so-quirky", Lauren explained. "I used gold animals that I DIY’d for the escort cards and table number holders which added a bit of whimsy and playfulness to the whole aesthetic. Our theme was Whimsical French Safari!"