Natalie and Patrick had a fairly traditional church ceremony but that’s definitely where the the tradition ended! Their wedding reception was one of the most authentic carnival/ circus themes I’ve ever seen! They changed outfits, had lots of performers and plenty of food truck options for their 500 (!) guests… Oh and they arrived on an elephant. NBD…

“The reception was at Texas Stunt Ranch”, Natalie said. “We chose it because we knew we were planning on having a circus complete with performers and an elephant and we knew there would be few if any venues that would be ‘elephant friendly’. So when they were not only willing but excited about our plan, we signed with them right away.” 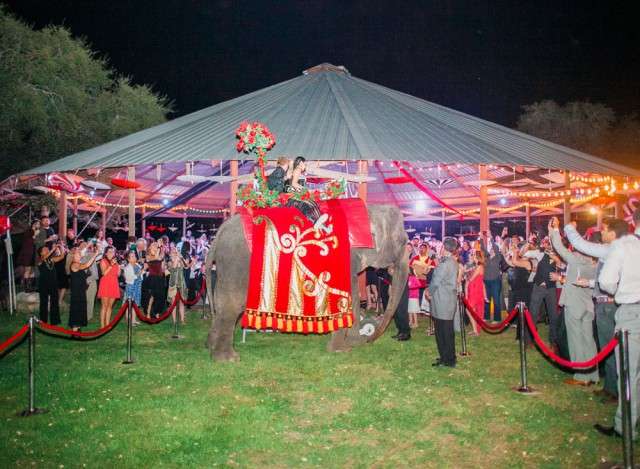 “Our entertainment was provided by The Vampire Circus and it was the absolute most amazing show I have ever seen….That ANYONE had ever seen! They were an absolute pleasure to work with and handled all the snags in the road with grace. If you have not seen them perform do yourself a favour and go. It was an incredible show, performed by the most skilled and astounding artists. They dazzled 500 people, and every single one of them told me it was the best show they had ever seen. They left the crowd awe-struck. I can’t begin to thank these guys enough. They had a pizzaz that made you not able to take your eyes off of them!!!” 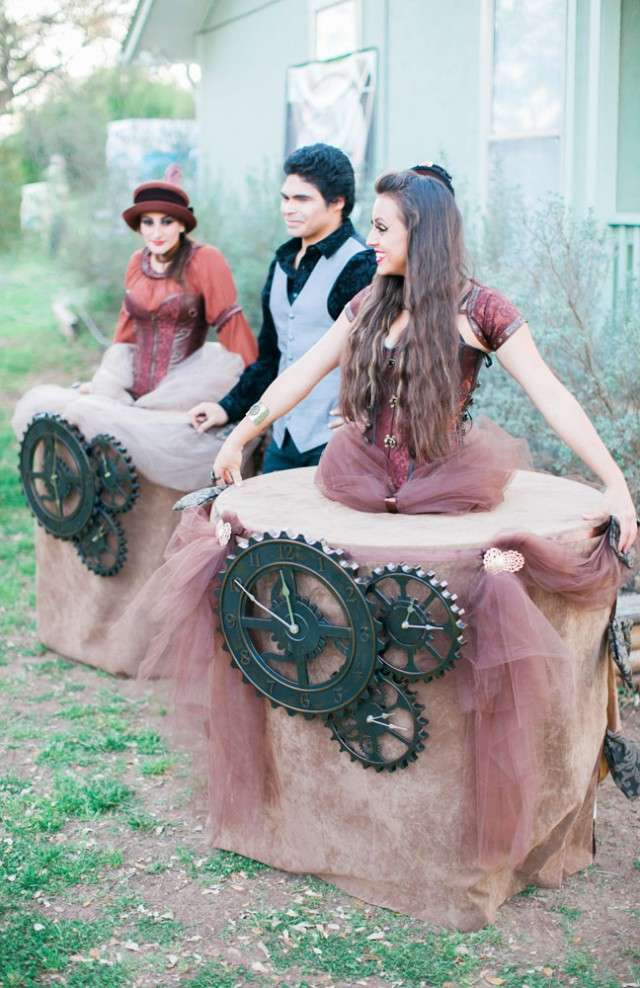 The bride’s more traditional, ceremony gown was made by Matthew Christopher. Her out-of-the-box circus themed reception outfit was made by Angela of Glamtastik. “She is a phenomenal designer. Originally I had purchased a different reception dress, but with only 30 days or so before the big day I came across the ‘new’ reception dress on her Etsy store. When my groom saw it he wanted to protest, considering I already had a dress planned out, but there was really no question… I NEEDED this new dress! It looked like it was MADE for our wedding and Angela was more than happy to accommodate our quick time frame. I couldn’t recommend her more highly for anyone looking for a fun dress for their wedding.” 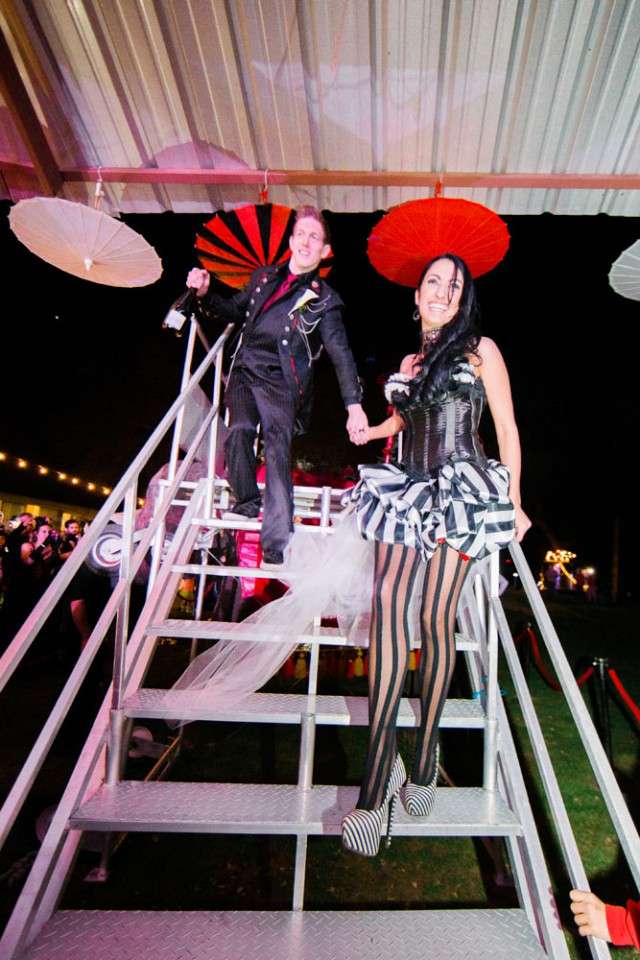 But it wasn’t just Natalie that got to go to town on an fun outfit, Patrick wore an incredible steampunk inspired outfit from Denver Bespoke. “Patrick wore the greatest wedding tuxedo of all time”, she explained. “The jacket came early, approximately six months ahead of the big day, and because it was so awesome Patrick wore it when they went out almost every-single-night between then and the wedding! And because it was so well worn, we ended up having to get a SECOND jacket made so that we had an untouched one to wear on the big day! The material was a silk brocade jacquard pattern with filigree buttons and steampunk watch movements adorned as accessories. The vest and pants were a fine silk material with a hidden pinstripe pattern in the fabric which was visible only under certain lighting. The outfit was both subtle and loud and took on a different character throughout the night depending on the lighting and how it moved—it was simply the PERFECT outfit for this perfect day.” 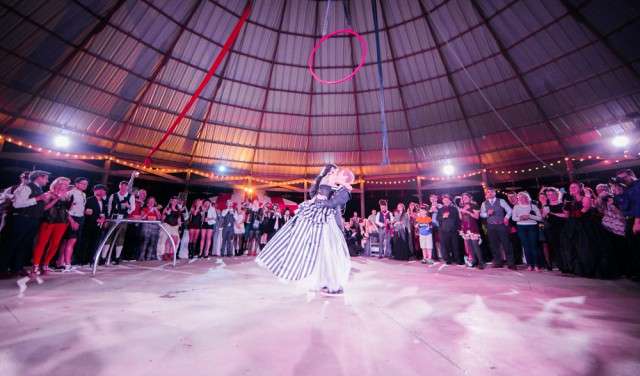 “My advice for future brides and grooms would be to remember it’s just a big party, and that will help you not stress and just worry about the important things”, Natalie concluded. “Also it’s going to go by so fast and you probably won’t remember a lot of it so do not skimp on your photographer and/or videographer. Have fun and don’t follow the guidelines that wedding planning books tell you! Don’t get me wrong, I absolutely used their lists, and timelines, because it helped keep things organised, but there was a lot of stuff that I read, that I decided I didn’t want to do or have at my wedding.” 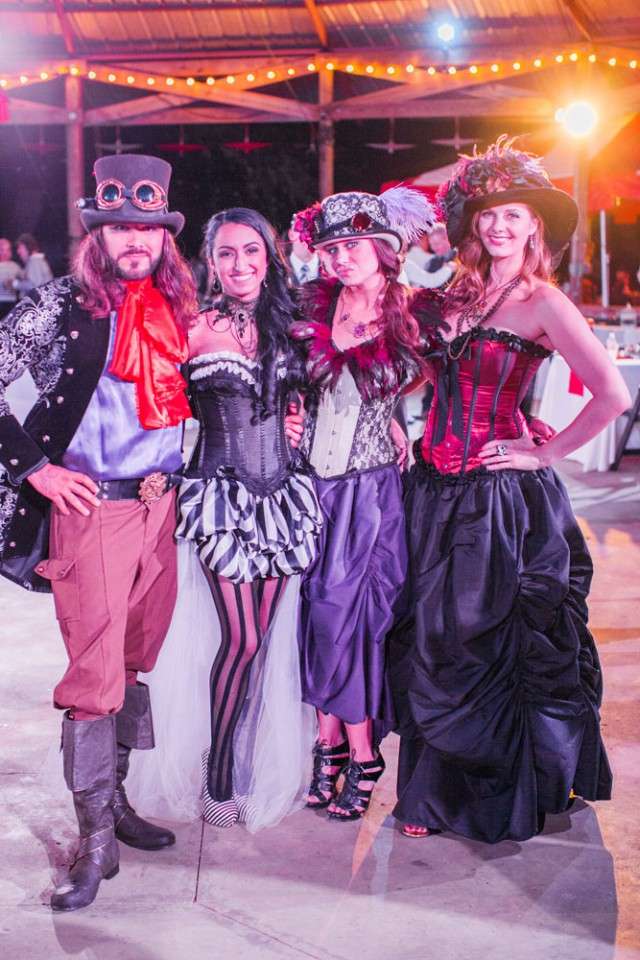 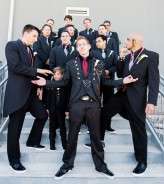 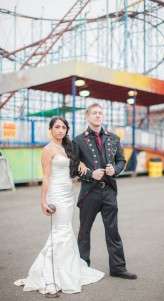 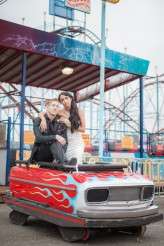 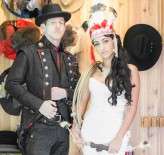 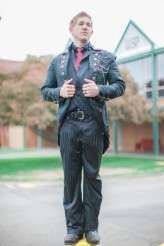 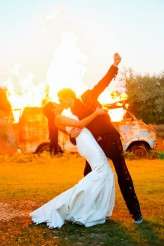 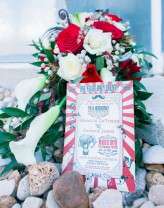 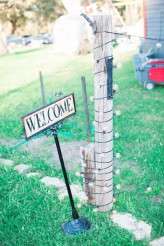 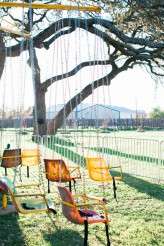 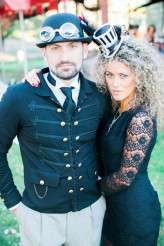 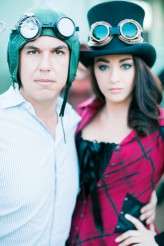 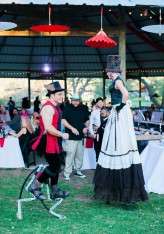 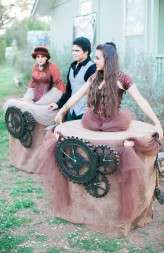 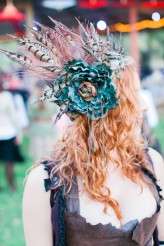 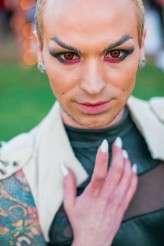 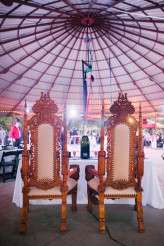 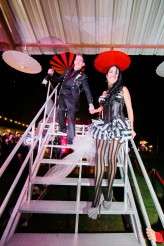 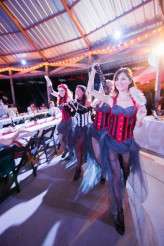 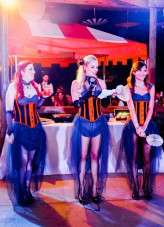 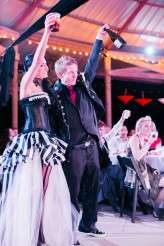 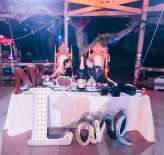 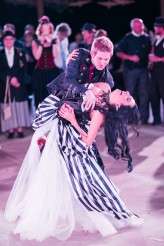 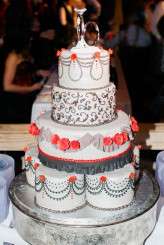 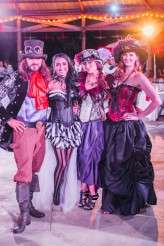 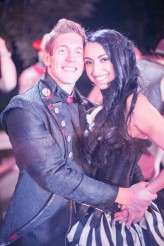