Joe and Madison had $2000 to spend on their wedding, so they decided there was only one thing for it – VEGAS! They were married by Elvis at The Little Vegas Wedding Chapel and followed the ceremony with a fantastic photo shoot in the desert with their photographer Roderick Harrison.

“Joe and I met on a dating site a year and a half ago”, Madison told me. “We moved in together after six months, and over this past winter his parents told us they were moving away from where we all live in Arizona to the Isle of Man and they wanted us to join them! Being of the wanderlusting, nomadic variety we immediately said yes and began preparing to move!” 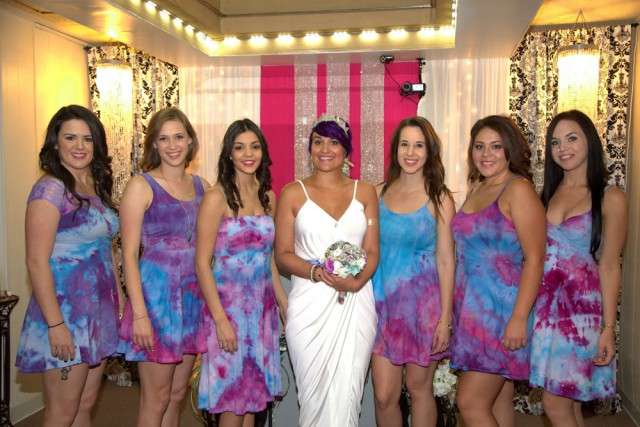 “We decided to get married before we left, and had the conversation about what kind of wedding we wanted. Since I wanted to hit Las Vegas one last time before we moved, we opted to save our cash and have a shotgun style elopement party instead of splurging on a traditional wedding. Since my better half is an outdoorsman and a big rock climber, we opted to spend the first two days of our trip camping, hiking, and climbing in the gorgeous Las Vegas Red Rock Desert.” 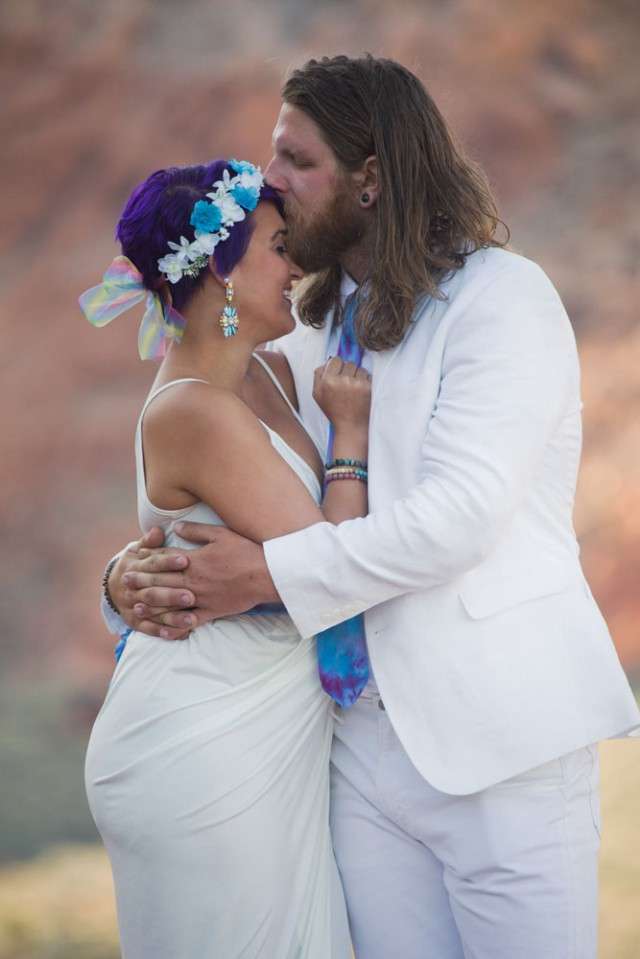 “I scrolled through Rock n Roll Bride for Vegas weddings to get some ideas, but mostly we just did what we wanted and what made us happy!” she continued. “We had Elvis officiate, I have purple hair, wore sparkly flip-flops, and Joe wore jeans and sneakers. I also tie-dyed pretty much everything I could get my hands on! We set out just to have an awesome week and get married sometime in the middle.”

“I DIYed almost everything. I made my bouquet with vintage brooches given to me by my mother-in-law. I made necklaces for me, Joe and my in-laws with crystals and I made my ceremony headpiece with the same stones. I also made my flower headband, necklace, and bracelets. I tie-dyed my husband’s tie, my sash, and all my bridesmaid’s dresses. Tie-dyeing everything was so much fun, and all the girls loved their dresses and have actually worn them again!” 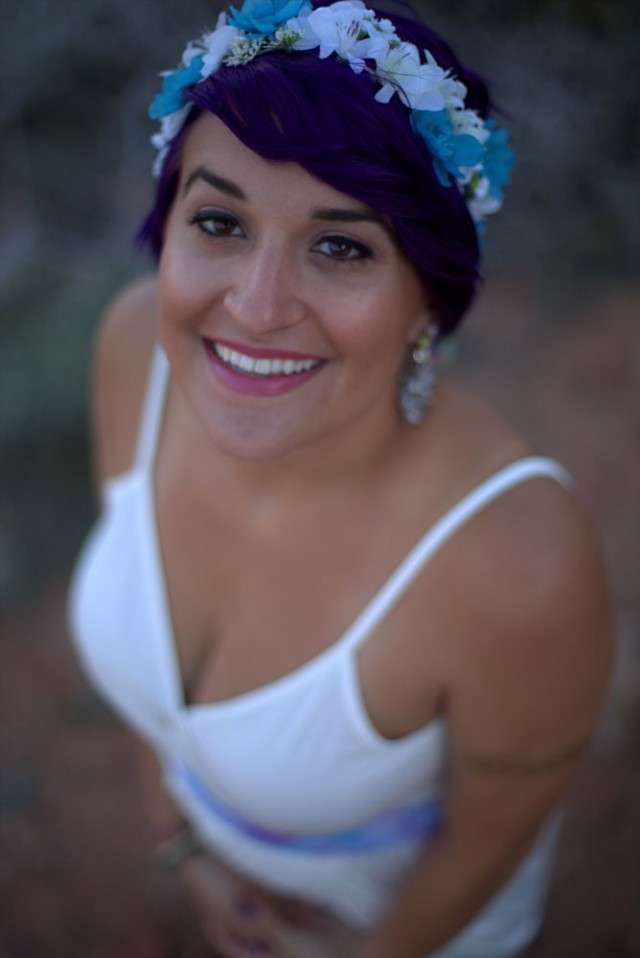 “We also saved money on basically everything. While we splurged on our time in Vegas (it was one last blow out after all!) the ceremony was only $300 and we scored big time on the hotel rooms by booking weekdays after a big holiday. Our photographer was my Maid of Honour’s best friend, Joe got a crazy awesome deal on his jacket, and I spent under $200 on my dress!” 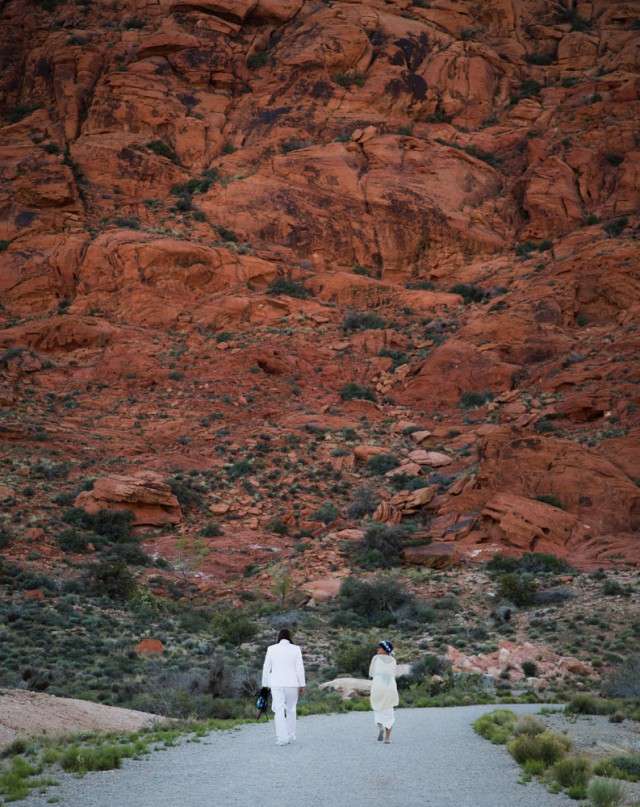 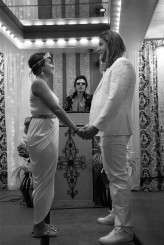 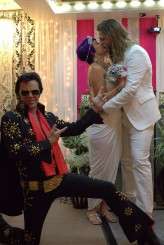 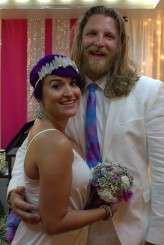 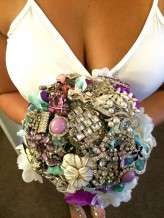 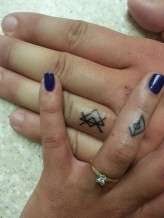 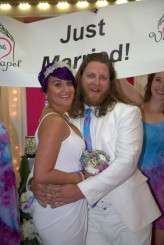 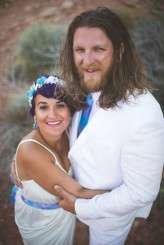 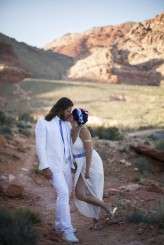 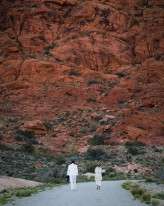 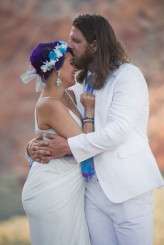 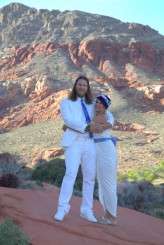 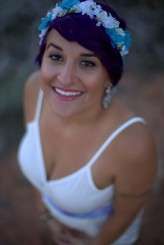 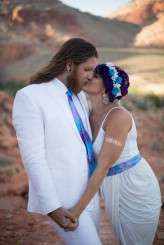 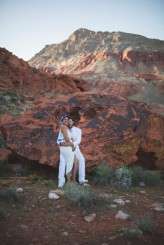 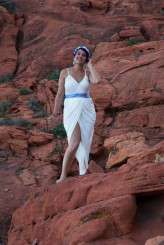 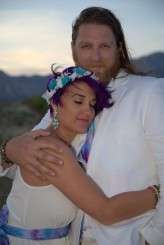