On May 3rd, and with just £5000 to spend, Charly and Phil were married at  Church of The Good Shepherd in Tadworth. They had their thrifty reception in the church hall next door! The bride wore a Nataya ‘Titanic’ dress and carried a homemade crochet bouquet. They saved cash by DIYing pretty much everything, from the flowers to the cake to the catering! Their entertainment was a two piece jazz band, made up of friends. 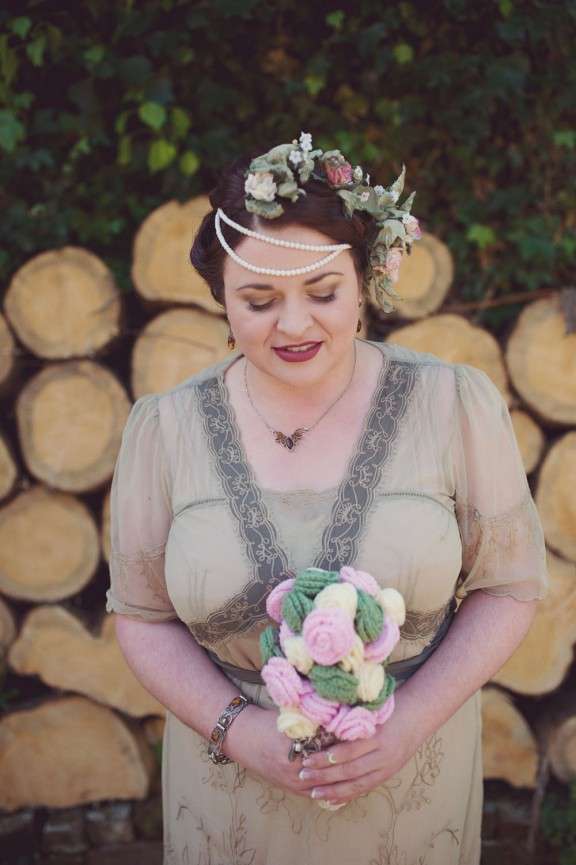 “We wanted to put as much of ourselves into our wedding as possible”, began Charly. “We knew that we wanted a lot of personal touches – from hand making all of the guest buttonholes (all 100 of them!!) to our favourite crystals on the tables. I also decided on something a little different right from the very start when I bought an original Edwardian tea dress that I had planned to customise. However, life got in the way in the form of job hunting and such, and so I had to shelve that idea when I ran out of time. I headed on line and searched and searched for something Edwardian-esque in my price range, finally landing on Nataya Titanic dress range. I fell in love with the green version, ordered it from The States and clapped when it arrived. It was perfect for me and made me feel like a bride in something that I would not need help with when going to the loo. I could dance in it, hug people in it and it was not going to make me overheat. Tick, tick, tick!” 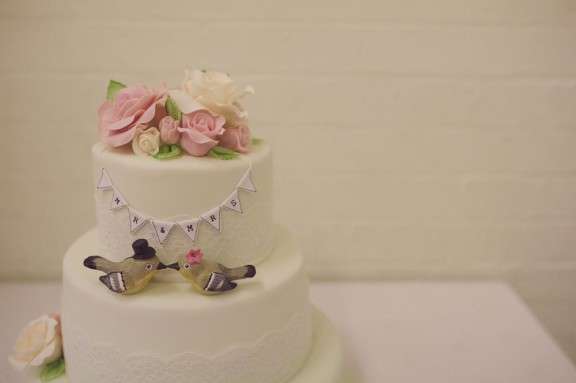 “I guess our theme would be thrifted homemade vintage”, took over the groom. “We both dress with a retro leaning anyway so that was always going to be a part of our day. We also wanted to play to the humble nature of a church hall, so wanted it to have a village wedding feel. The colour scheme was greens, pinks and creams which are the colours of the Pagan Sabbatt of Beltane. We chose the wedding date especially because of this, as Charly is Pagan.”

“We could not have done any of it without our wonderful friends and family members”, Charly explained. “It just would not have happened. They booked the day off work on the Friday, turned up at the hall and all mucked in. It was amazing to watch people give their time so selflessly for our big day. A whole lotta love poured in from everyone. The same goes for that actual day – friends putting out the food and tidying up as they went – all without question or gripe. Amazingness. That, to me defined, our whole day. Everyone pulling together to make it special.” 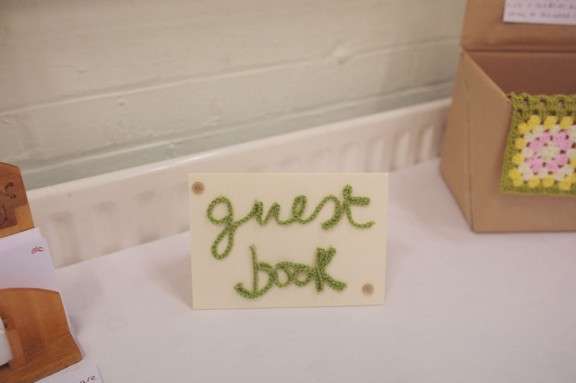 “We are big thrifters, so it is something that is second nature. We did not want to cut corners as such, but if we could cut down the cost of something, we did. I saved money on the bouquets by hand making them with crochet flowers, which also meant that we had something to keep long after the event. I learnt to crochet just to to make the roses. it was frustrating at times, but in the end totally worth it. I also made all of the buttonholes for our guests to keep. The reaction they got was amazing, more than I could have hoped for. I had a clear idea of how I wanted the centrepieces to look – like an extension of our home – a little eclectic with old books, tins with planted flowers and movie cards with our favourite films. I found everything at car boot sales. Every tin was under £1, the flowers came from our local market, the old books were collected from jumble sales or already belonged to us and the crystals were bought on eBay. Each table centre piece came in at about £8 each all in.” 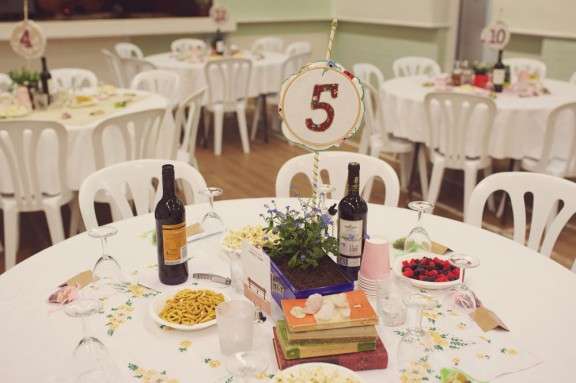 “The bunting that went across the hall was made using old net curtains from a car boot, polycotton and hessian from eBay. Each length came in at about £5 all in. The other bunting was made using paper doilies from the £1 shop secured onto lengths of wool and then dotted about the hall, which I really liked the effect of. Cheap – but effective! Phil’s suit was also a bargain from a local charity shop coming in at a whopping £35(!)” 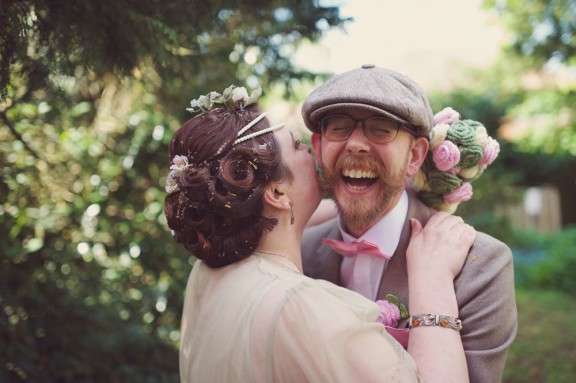 “We also saved a lot of money by self-catering. I appreciate that this is not every ones cup of tea but I felt calmer being in control of what was served and by saving us up to £1.5k on the food bill. I could not justify spending so much money on caters when I knew we could do it ourselves. We had already decided on a self-serve buffet instead of a sit down meal. As we were already doing everything else ourselves, it seemed like the natural thing to do. My mum thought I was mad. I remember clearly having to talk her into the idea, but we could not have done it without three things: a small chest freezer in our spare room, the hiring of a refrigerated trailer (a total stress-relieving godsend!) and our friends who put all the food out for us behind the scenes and helped clear away. They are worth their weight in gold.” 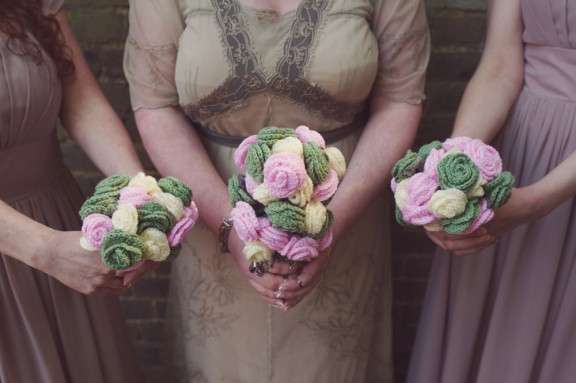 “We spent the most money on our photography”, concluded Phil. “We knew that we had a limited budget, but that the pictures are a real investment and that this would be our biggest expense. We found Rebecca Douglas Photography through an advert on Rock and Roll Bride, fell in love with her portfolio and took advantage of a discount offer Rebecca had running at the time. So, we saved a little money there. For us, it was totally worth paying a professional to do this job. We toyed briefly with the idea of friends or a cheaper photographer, but decided against it immediately.” 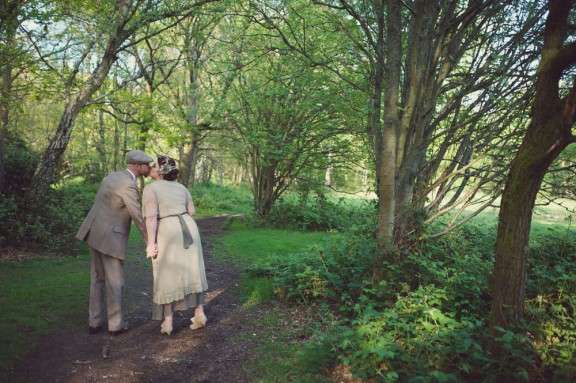 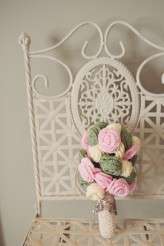 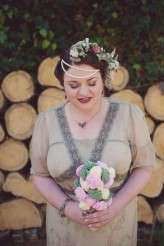 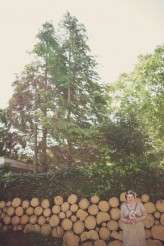 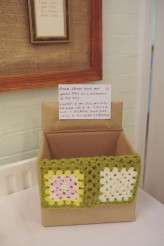 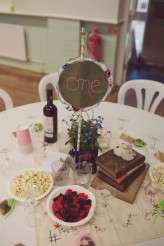 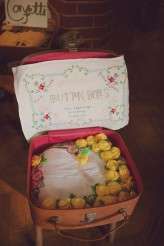 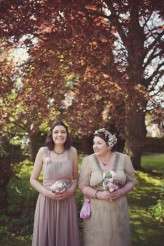 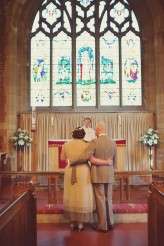 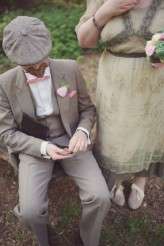 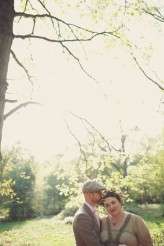 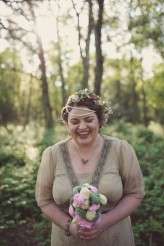 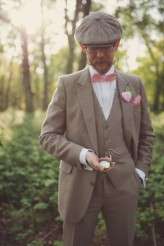 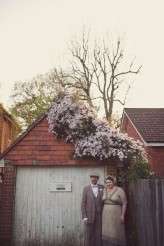