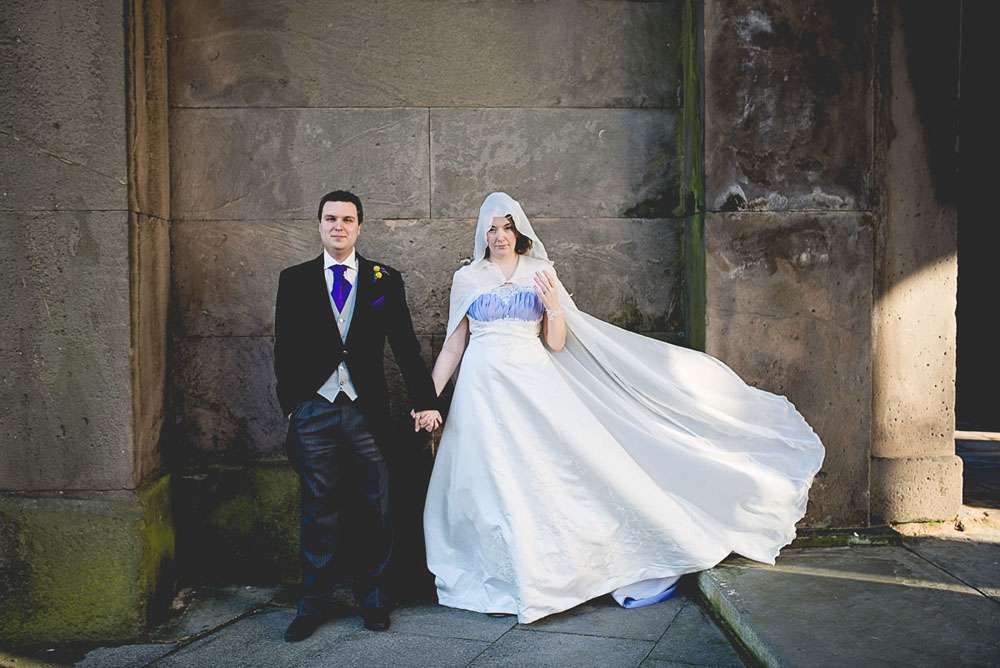 Sam and Stu met at college and bonded over a mutual love of video games, “primarily how to get the knights of the round summon in Final Fantasy 7!” Sam laughed. So needless to say, when it came to tying the knot, the very thing that brought them together was to be the theme of the wedding. ” We’re game geeks to the core! We wanted sleek quirky bright design with our gaming interest being the centre of it. We play tabletop RPG’s, board games and regular old video games.” 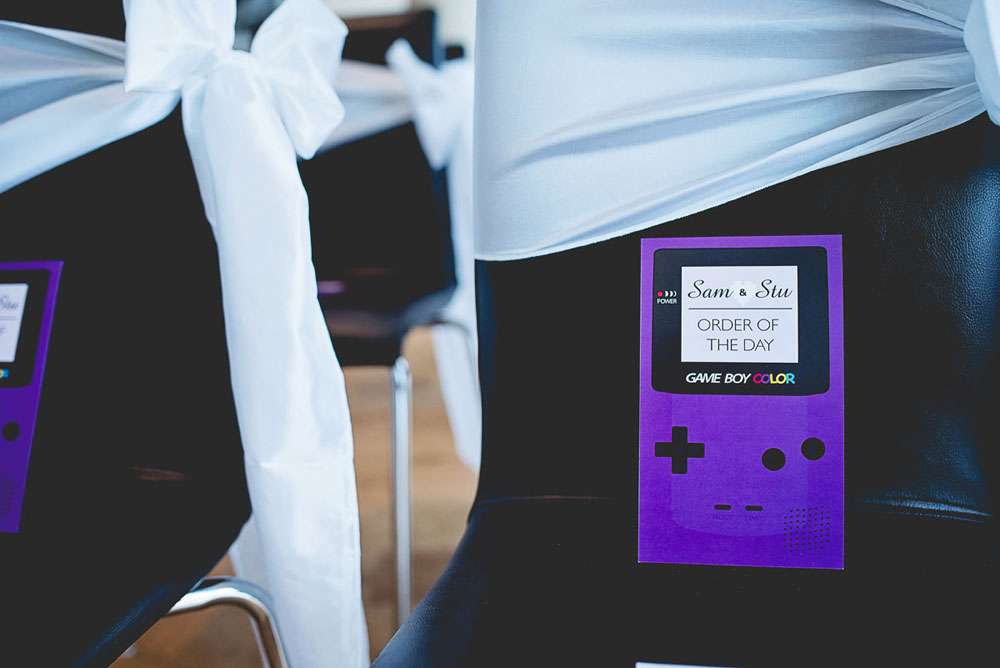 The day was held at aBode Chester, the modern setting was perfect for their day. “When you first delve into ‘wedding planning world’ its overwhelming”, she said. “All the old photos of your parents, the old traditions that have formed your opinion of weddings are shattered, especially when you find out about Pinterest (which is a blessing and curse). We didn’t want a ‘safe’ wedding. Plain white dress, veil, only roses bouquet with diamanté etc. It just wasn’t us. We had a few traditional elements to appease my new husband’s silver spoon needs (except chair covers! I won the battle on that one!) but everything else was free game to our artistic license.” 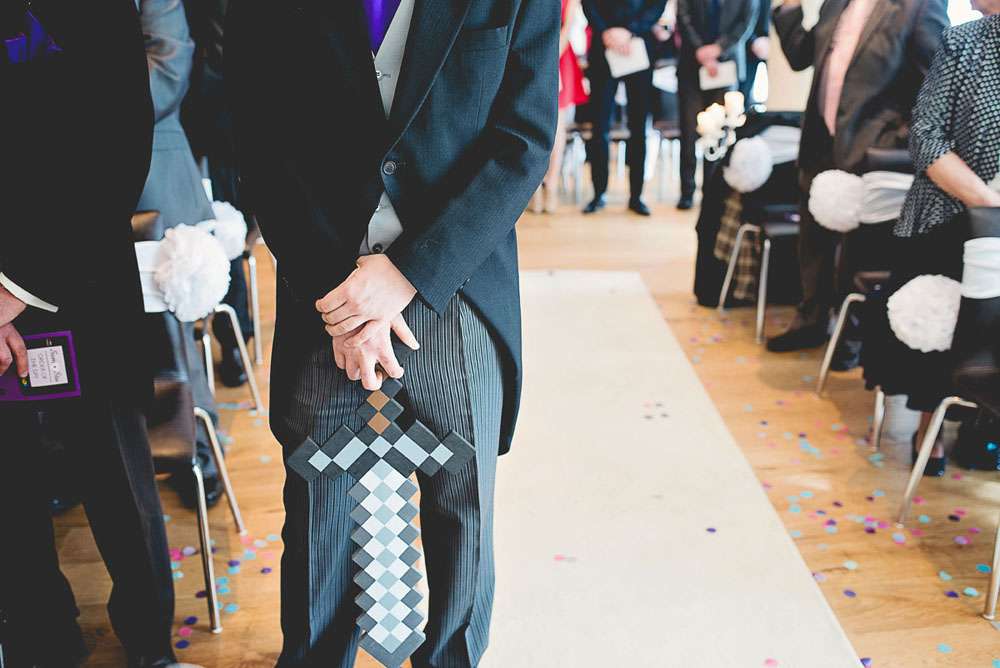 “We aimed for video game elements but the same time try and have it cohesive through the planning. Our table plan ended being a list of every game we’ve ever played! I personally enjoyed drawing us in chibi for each table.”

“At times planning did feel like an obstacle course! But we had two wonderful families that pulled through for us! A lot of the wedding wouldn’t of happened if it wasn’t for them. Our flowers were free because my auntie runs her own florist and gave this to us as gift and I loved them! I wanted a handful of rainbows and she delivered expertly! My mum paid for our make up, my dad paid for the photography, Stu’s sister and brother in law paid for the cake! Nan paid for suits, and Stuart’s parents helped pay for the aBode. We relied on the generosity of our family and friends and they supported us all the way through.” 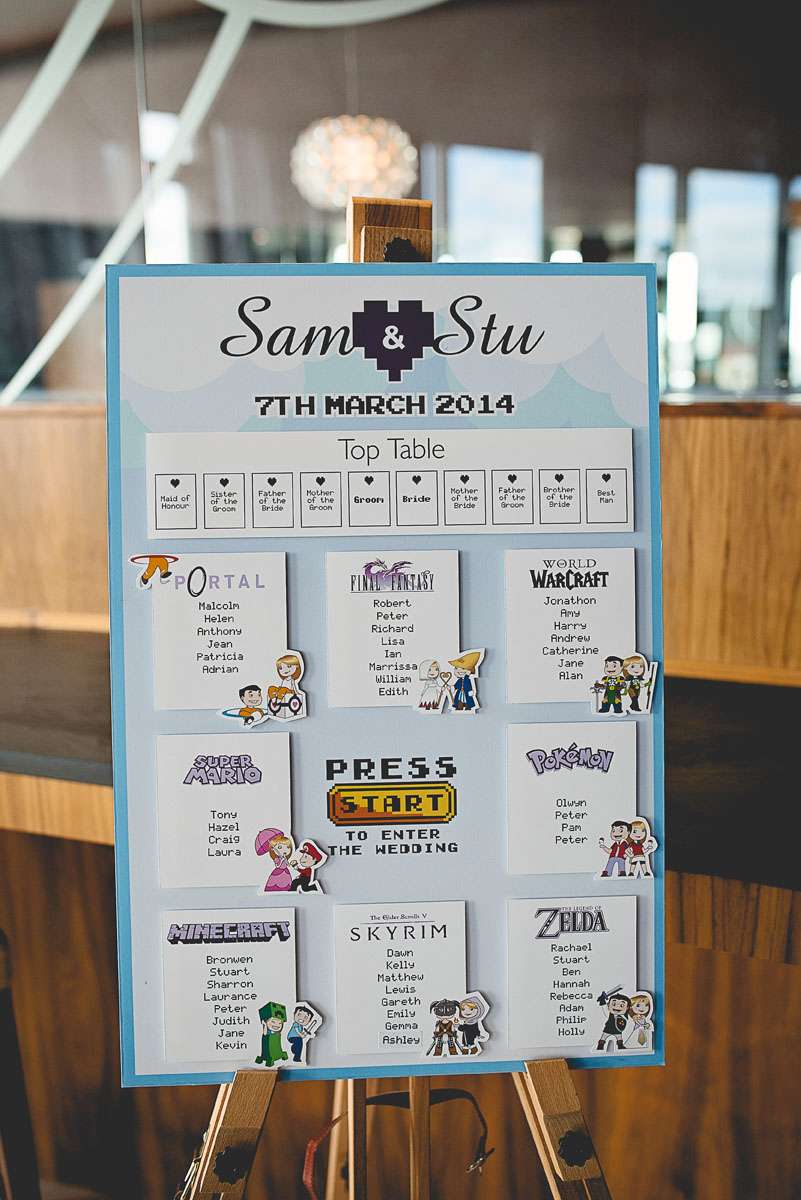 “I did throw in some surprises into the mix for Stu,” she explained. “Me and the best man Paul stuck the pixel sword to the venue the day before so that before I arrived on the day Paul could present it to him declaring ‘its was dangerous to go alone, take this!’ and passing him the sword (an old line from Legend of Zelda game).”

“There are also a LOT of DIY stories, primarily because we can be control freaks when it comes design so we undertook a lot of projects. I’m illustrator so I provided all the artwork for the theme and Stu did our graphic design so all the stationary we made it ourselves. We also got them printed for free thanks to Stuart boss’s at the printing house. So an extra bonus there!” 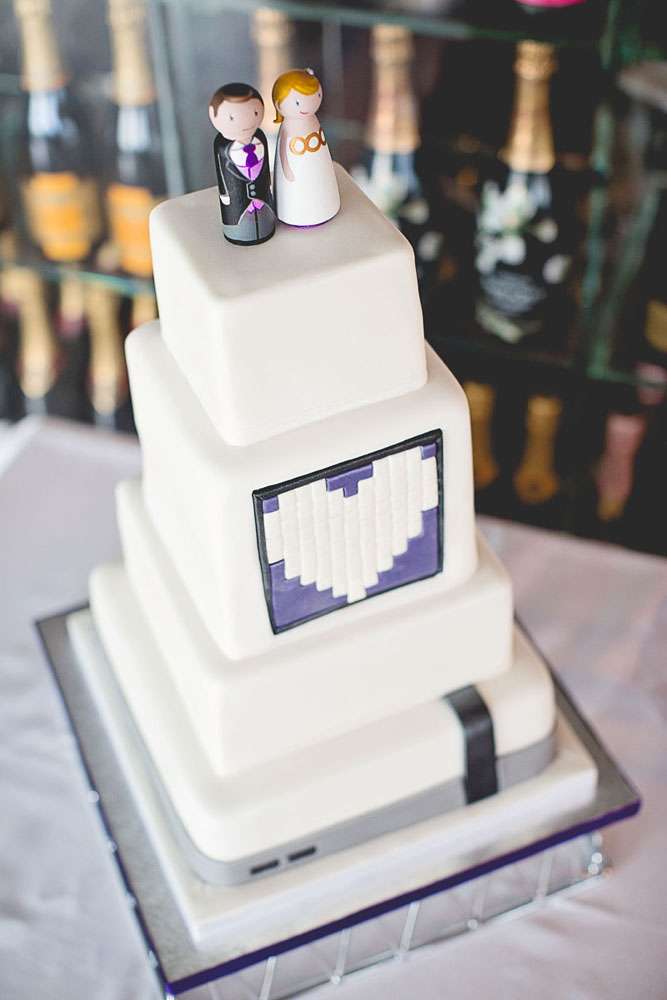 “I made my head dress! Recalling back to my fine art days I used my skills to make it. I looked for a half crown headpiece for ages but couldn’t find something in my budget. I saw a pretty headband at my local market, I bought it, ripped the jewel piece off the headband and remodelled it with my trusted glue gun!”

“Our cake, we designed ourselves. We supplied a concept drawing to Ann our cake lady and she made it happen in all its four flavoured glory. We then bought some wooden doll and with our combined painting skills (and some ‘green stuff’ modelling clay) made our cake toppers. These I love beyond a doubt since these will be our little keepsake. They live on our fireplace now.” 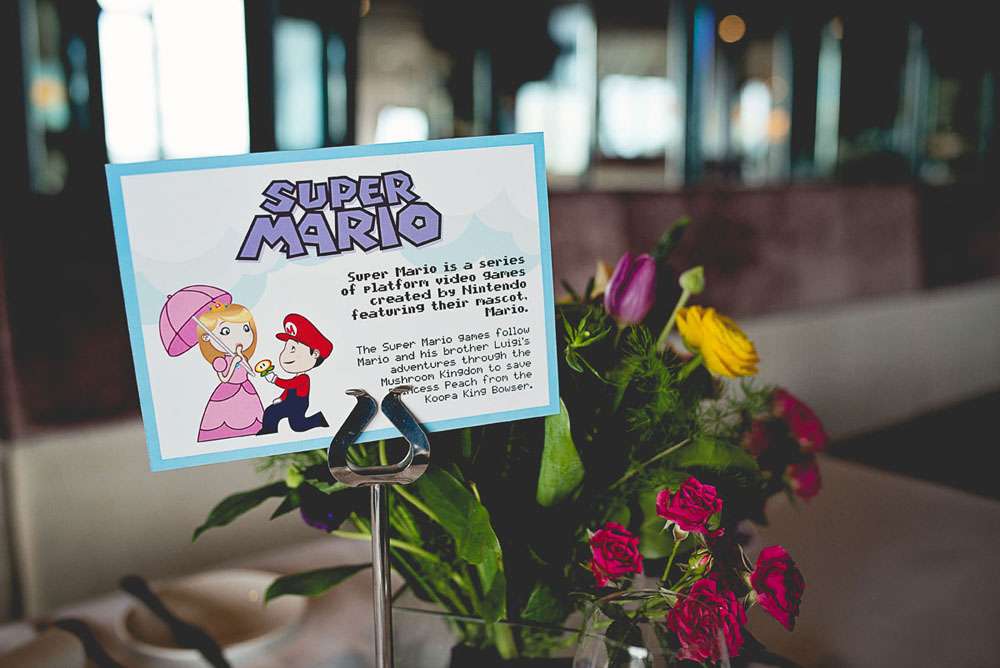 Sam wore a dress which she bought online, with amazing Irregular Choice shoe boots and a cape! “My favourite thing of the whole wedding was my whooshy chiffon cape. I didn’t want a veil but a cape? I couldn’t resist! It surprisingly kept me warm in the wind that a fever from my well disguised cold. Stu loved my ‘Galadriel’ cape, I just need to find more excuses to wear it!” 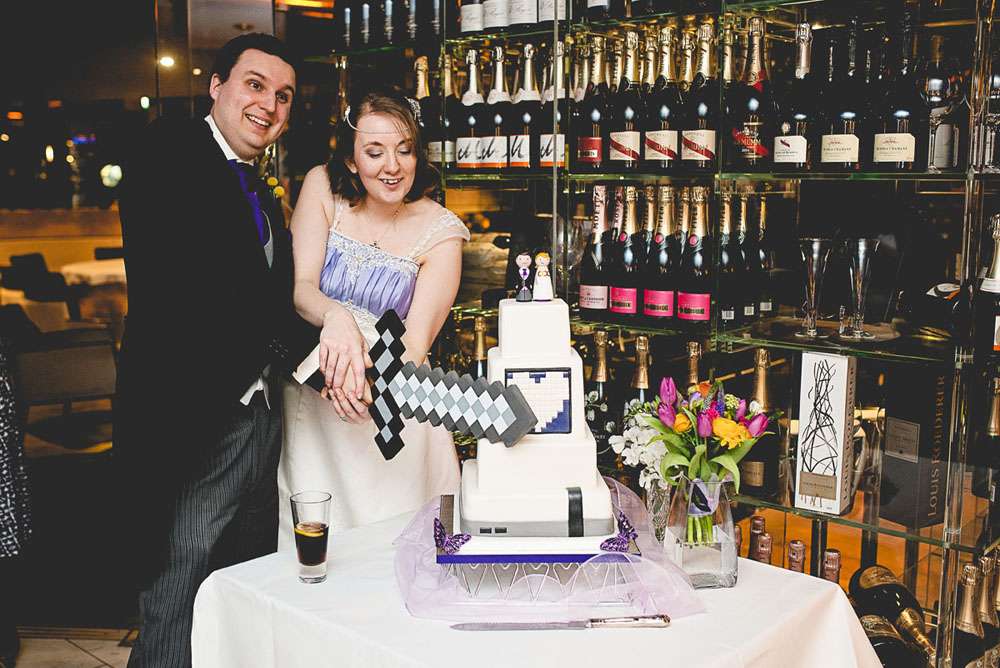 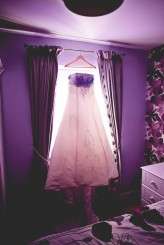 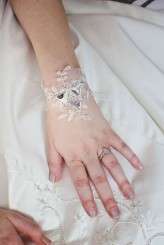 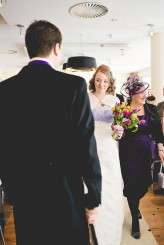 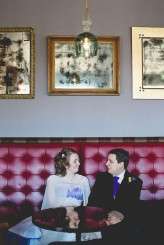 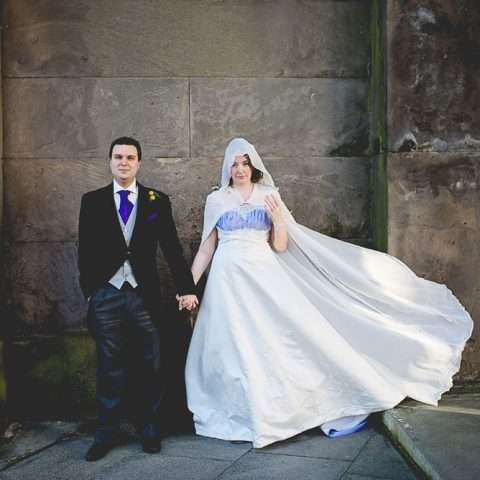 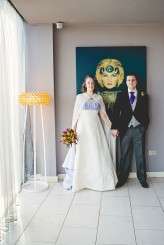 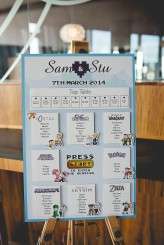 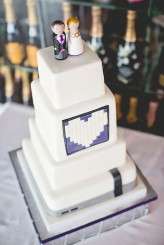