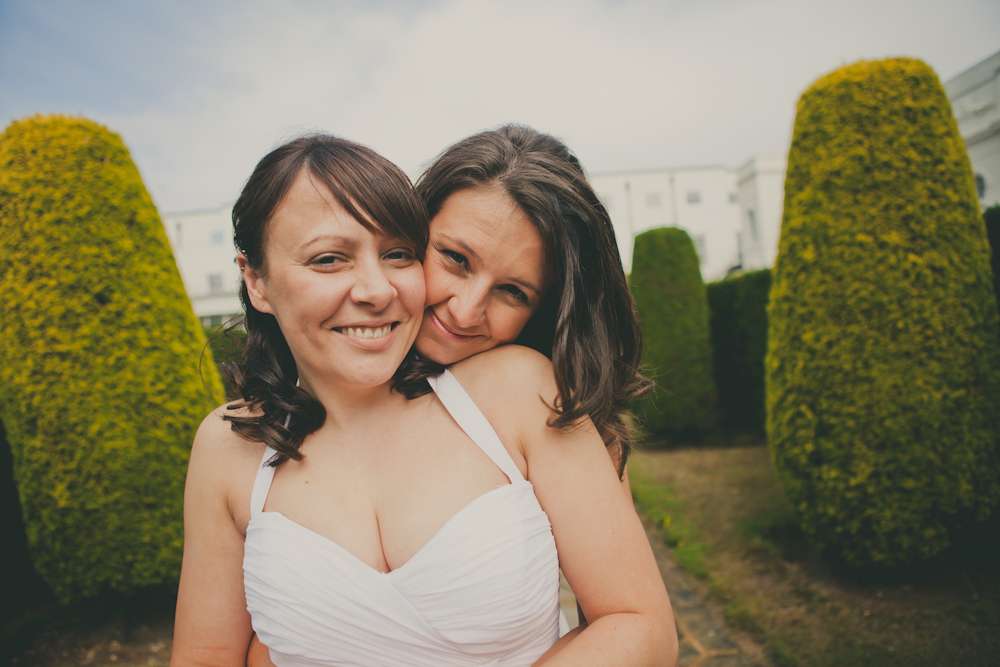 Just after we got married in 2008 I found out that you could get married at Pinewood Studios. I’m not going to lie, I was a bit gutted to have not discovered this out sooner, what could be better for a movie nerd than getting hitched at a film studio?! Luckily for Sally and Lisa, they weren’t as slack on their research as I clearly was and they booked it for their wedding in September. 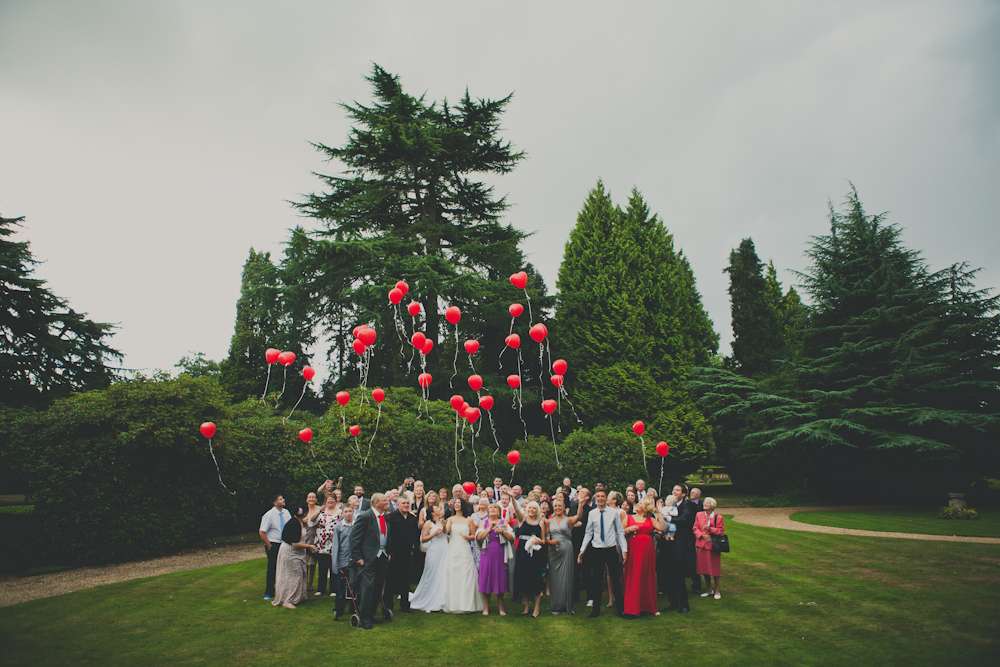 “Our wedding theme was FUN!”, began newlywed Sally. “Lisa and I are often described as big kids, so we wanted a wedding to match our big kid personalities. We have been to a number of weddings that were a little boring and reserved, or they only livened up after a few vodkas. We wanted everyone to have a day of fun and laughter to celebrate our love. We dubbed our day ‘Carry On Shenanigans’, because the Carry On movies were filmed at Pinewood and Lisa used to love watching them. Shenanigans was the perfect word for the tomfoolery we had planned! We had an adult-only guest list to ensure the adults were the ones enjoying the fun and games!” 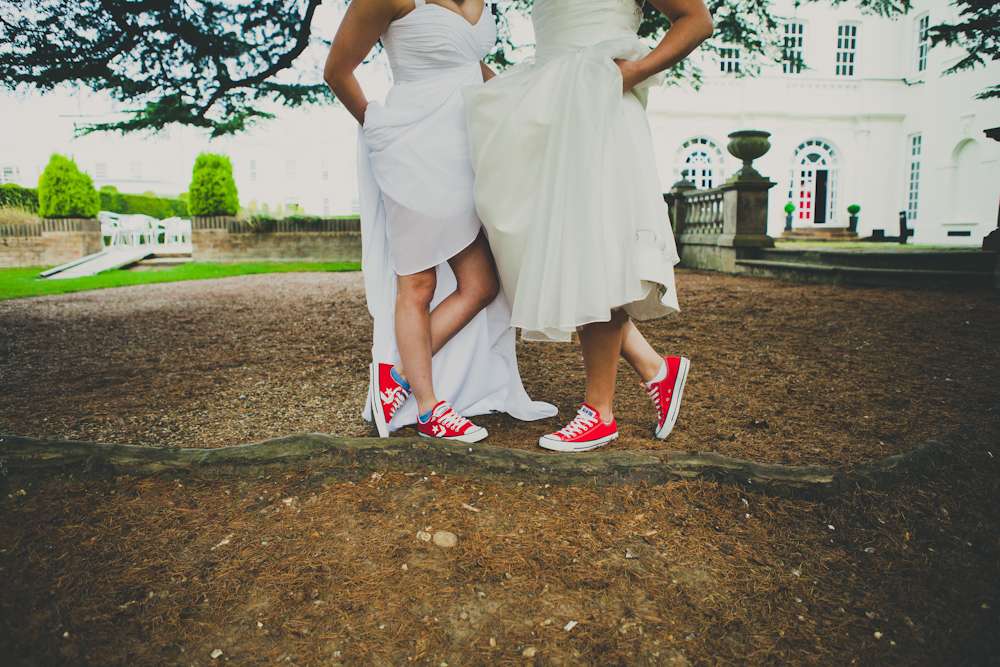 “Our entire day was a day with a difference”, she continued. “We dressed up as Batman and Robin to create Superhero save the date invites, saying, ‘You save the date and we’ll save the world’ and we put the costumes back on during the reception! Heatherden Hall, at Pinewood Studios was a breathtaking venue. The ceremony and reception rooms were perfect and the event organisers were so supportive and meticulous with every last detail. We arrived at in a red Dodge Charger limo and we walked down the aisle in red converse to compliment our bridal dresses. They were definitely a defining feature, which everyone loved!” 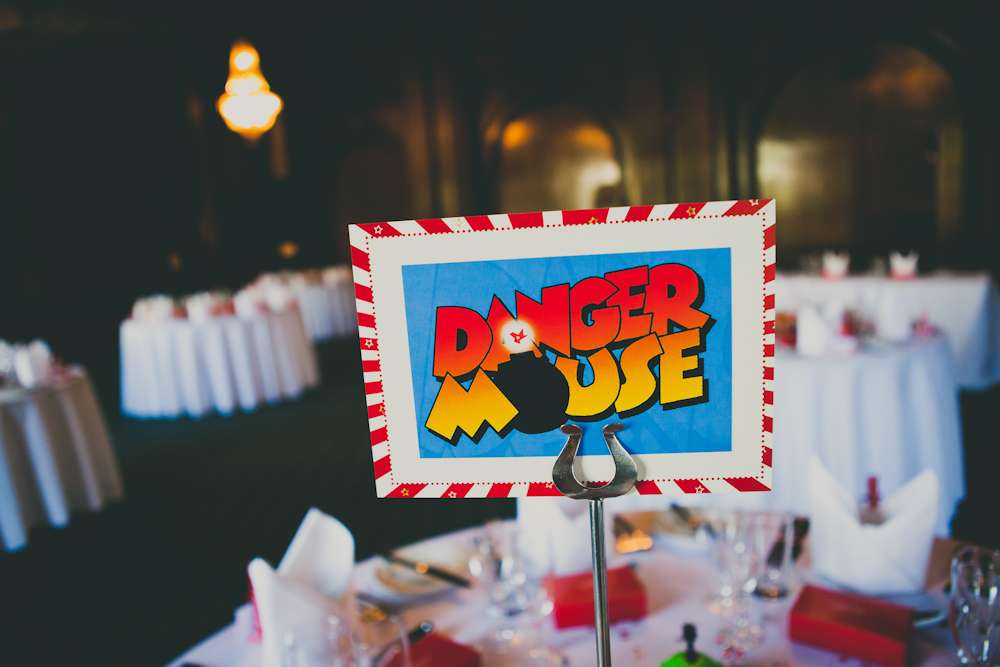 The geeky theme continued with their wedding cake which was an  awesome Super Mario Bros 3-tier cake, with edible figurines. “The cake maker, Leigh Koh-Peart of Craft Cakes, based in North London did an amazing job. All of our guests were blown away by the cake. I’m told it tasted lovely but Lisa and I didn’t even get a bite! Our table centre pieces were games: Hungry Hippos, Kerplunk, Operation and Buckeroo. We also had ‘disposable cameras’ on the tables, which were actually water pistols and BeanBoozled jelly bean spinner games with nice and nasty flavours. They were certainly an ice-breaker!” 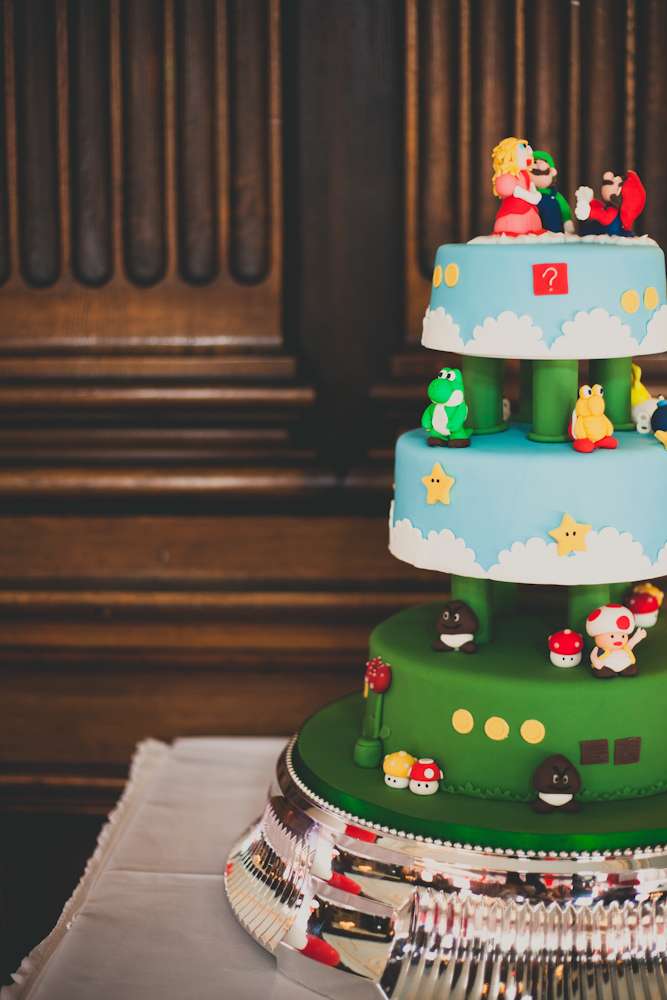 “We had a relaxed BBQ meal and an open bar to help get the party started”, she continued. “Our retro candy bar was a hit with the other big kids! The red heart shaped balloons, released in the magnificent gardens of Pinewood Studios, made for some lovely photos too. Although I had to apply for permission from the Aviation Authority and notify the Police before we were allowed to release them! The inflatables were brilliant fun, particularly the bungee run, and the photos show the determination on people’s faces. I had whip lash for the first three days of our honeymoon from the Bungee run! Lisa and I had our first fight as a married couple on the gladiator duel; we diplomatically called it a draw. We didn’t have a first dance; we had a first rodeo…! Yeehhhhhaaa!! We have two pet sheep, so we went for the rodeo sheep, in their honour!” 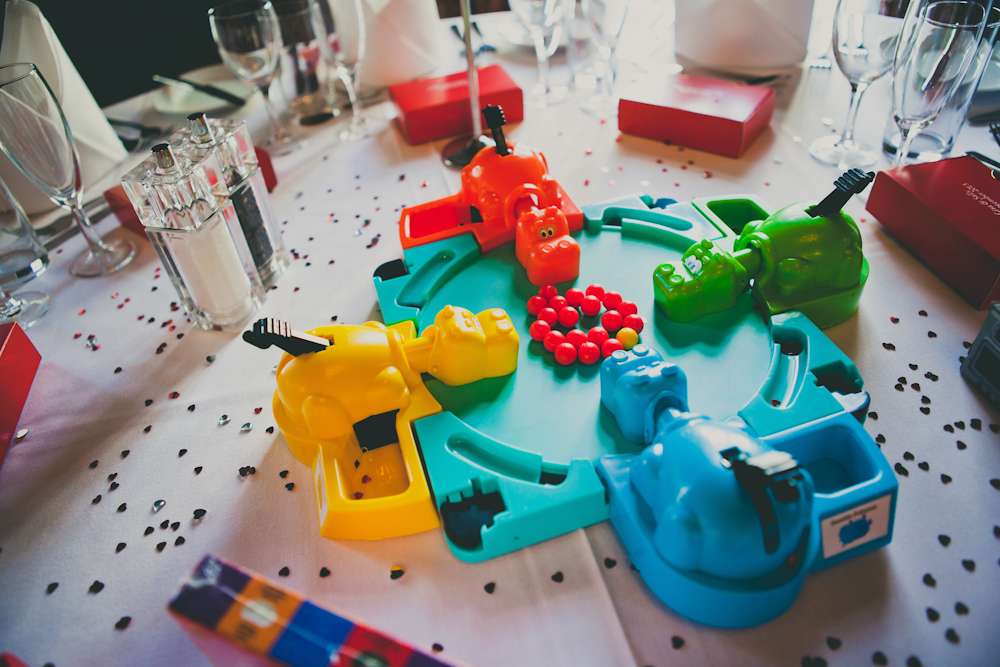 “Our advice to newlyweds-to-be, would be, do it your way”, she concluded. “Don’t follow tradition and do things for the sake of them. This is your very special day. A day when you are marrying the person of your dreams, make sure your day reflects your personalities and enjoy every second of it, without regret. At some point in the day, find some alone time with your partner to savour the moment. The day really does fly by so grab a moment to take it all in. We had such an amazing day; I could do it all over again tomorrow!” 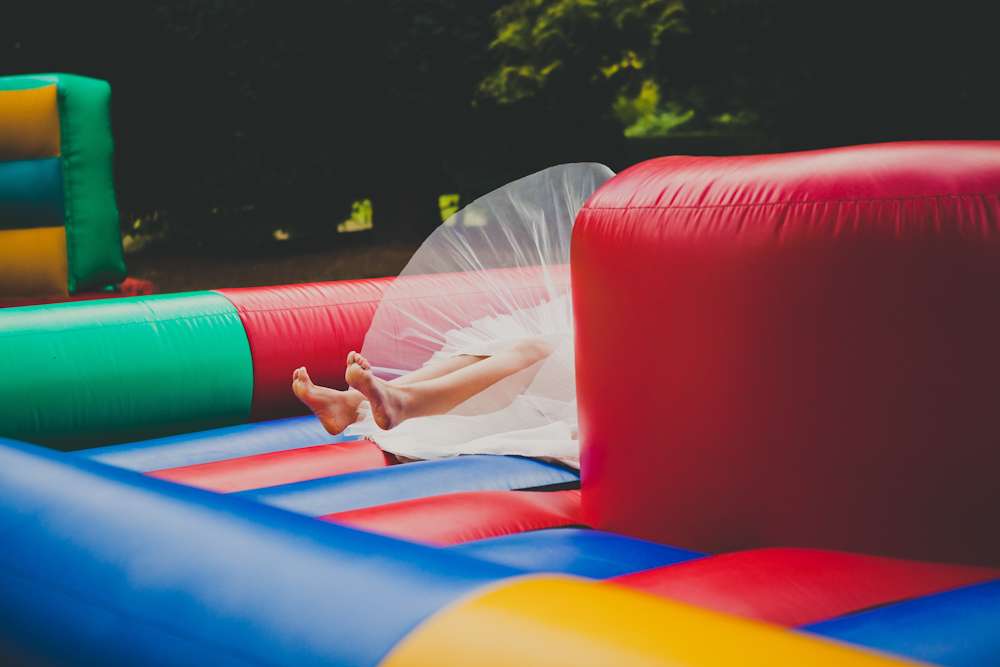 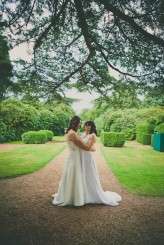 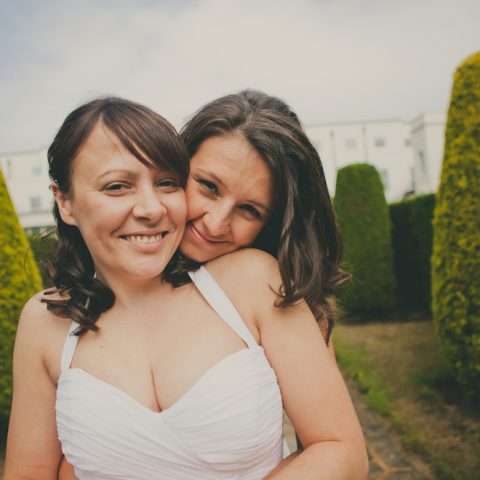 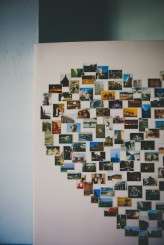 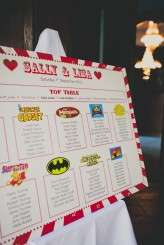 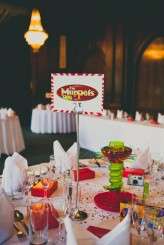 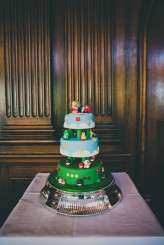 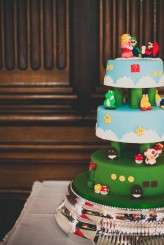 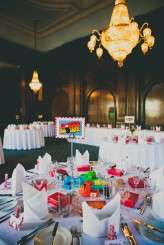 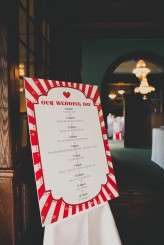 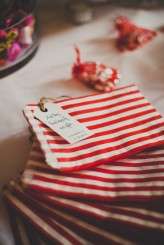 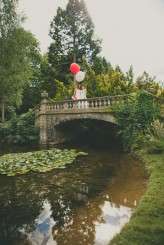