A lot of you will no doubt remember Whit and Colby’s ‘Non Wedding’ shoot by the incredible Brooke Davis. It was one of my most popular wedding features of all time, and weirdly, sparked quite a bit of debate. But to those that said it was an irrelevant shoot with no real meaning to actual brides and grooms – today I present to you Alicia and Phill. After seeing those images not only booked Brooke to shoot their elopement, but went for their very own ‘Non Wedding’ theme – a secret ceremony and a party in their own back garden. Inspiration is everywhere. 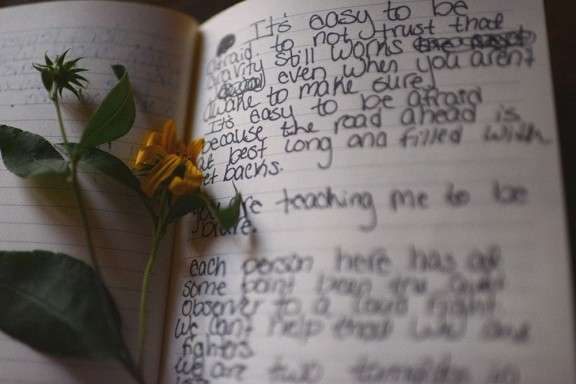 Having a small and personal wedding was important to these two and they only invited people that mean a lot to them and their relationship to take part in the day. “We were inspired by Courtney Love and Kurt Cobain’s wedding in Hawaii and of course the ‘Non Wedding’ shoot by Brooke!” Alicia began. “Everyone that was invited have either lived with us at one point or was there for the hardest parts of our relationship.”

“We had a secret ceremony. It was a Wednesday and we didn’t really care at all about traditions, we just wanted to be true to who we are as a couple, and not make a big stressful deal about it. We just wanted to peaceful say our vows without any nervousness of who would hear them.” 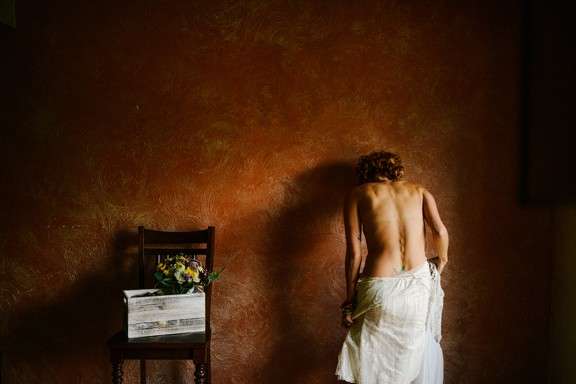 “Writing our vows was the most stressful but also most rewarding part of our wedding. We made a pact that we would write them the day before we had to say them and whatever we wrote we were going to just let it ride. I am so glad we did that now because I have come back to my vows a lot even in the last few weeks and thought that they were perfect for what I wanted to promise.” 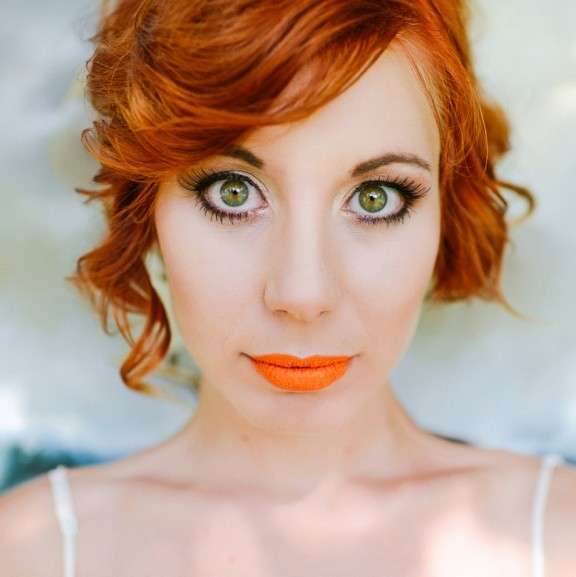 “My friend Dan officiated the ceremony and he walked to meet me in the prairie before everyone else. That was a really great moment in my memory”, Alicia continued. “The one trade off of having a secret ceremony was not inviting any family because our families would push the numbers up too high for what we wanted. I was a little bummed my dad wasn’t going to walk me down the aisle but I knew ultimately it had to be this way. When Dan saw me for the first time his face was priceless. It felt like a fatherly moment and I was so thankful for that.” 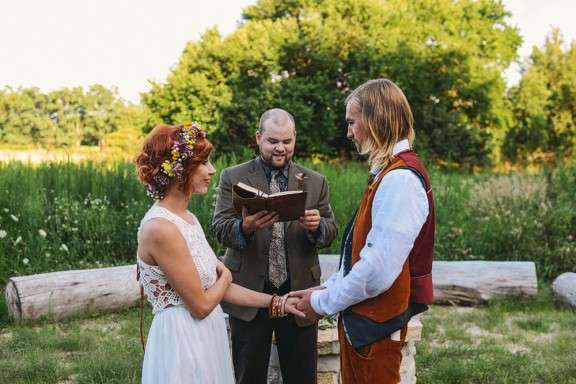 Alicia wore a $50 dress that she bought on the morning of the wedding and Phill donned his father’s prom suit. “I think we as a couple are kind of quirky”, she said. “He is a blue collar concrete worker working on his first novel and I am a wedding photographer so we both are a little eccentric. We just wanted our wedding to be completely us. It was 100% us. We got ready at our house, went to the prairie and then partied in our back yard. It was 100% us because everything in our wedding was from our house or something that inspires us.” 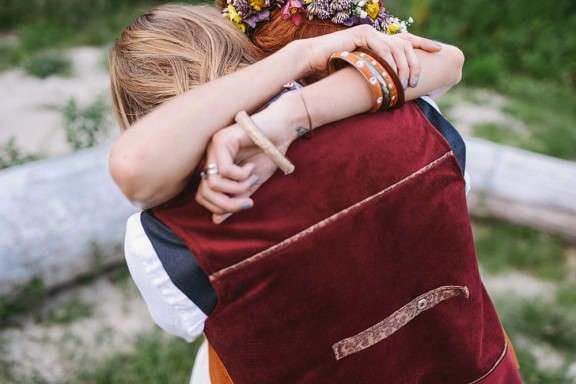 “I used the plates my parents got as a wedding gift more than 25 years ago for our dinner party and I wore one of my maid of honor’s earrings – the same ones that she wore at her own wedding. Phill’s suit was the suit his dad took his mom to prom in and his vest belonged to one of his close friends – he also got married in it!” 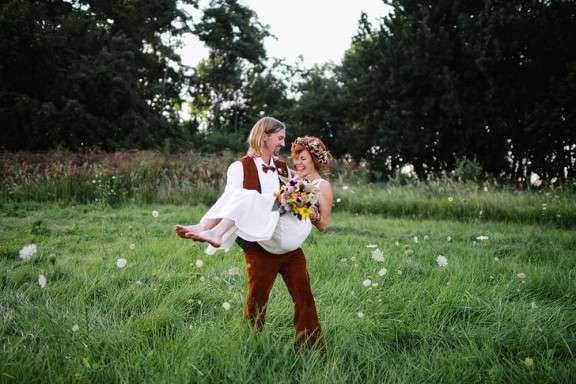 “I had originally bought a different dress but after getting it back from the seamstress the day before I absolutely hated it. It didn’t fit me well, it was clunky, and it was already coming apart at the seams. So I went to the mall and bought a new dress the morning of the ceremony and it was the best thing I could have done. My friends thought I was just having jitters at first but once they saw me in the new dress they were convinced it was a good thing I went with my gut. The dress was $50 and our photographer Brooke had the idea to cut up the old dress and use it to get ready in. it worked out perfectly.” 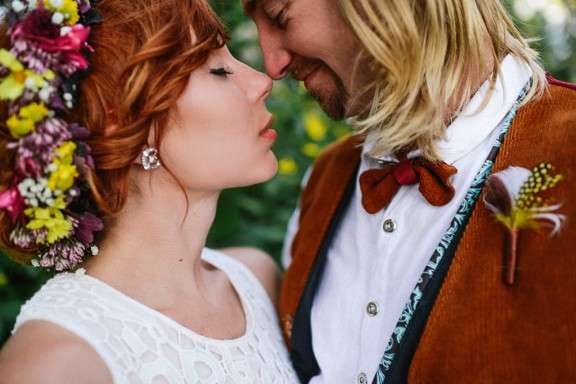 “I also really loved the flowers”, she explained. “We picked wild prairie flowers for the ceremony site and I asked the florist to use all native wild flowers and what she was able to do with my bouquet just floored me. I’m a photographer myself and photographed the bouquet well past when it wilted because it meant so much to me. The florist even put a glass piece on my bouquet which had been made by my friend sue and had some of one of my rabbits ashes inside. It was really special.” 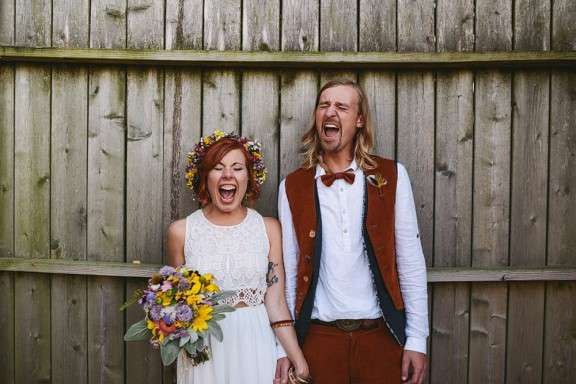 “We did everything so unorthodox that we saved so much money”, Alicia concluded. “We had a friend who is a novice chef and bread maker who made our wedding meal, we picked wild flowers and we got all of our accessories and whatnot from either flea markets or vintage shops. We just made it as low key as possible so that it would be fun for us without being too overwhelming.” 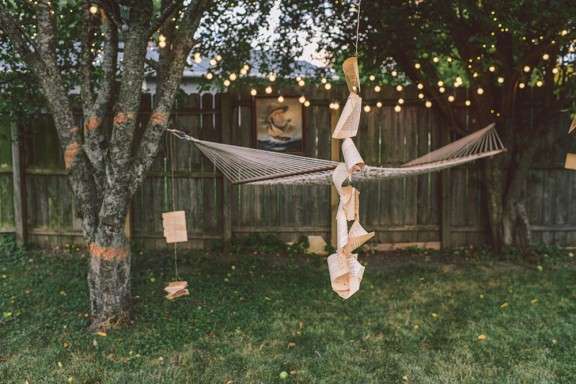 “The only thing I would have changed would be that I’d have relaxed more. Even with how low key it was I feel like I missed so much worrying about all the details and schedules and what needed to be done and when. That was another reason I loved having Brooke as our photographer. Not only is she incredibly talented but she really got the fact that I was anxious and was so calming and intuitive to what I needed. If I started to get overwhelmed she would tell me to walk into another room and breathe for a bit. Having her around was so great because she knew a wedding is just as much about the experience as it is the photos and she made sure I had peace and quiet if I needed a moment. She is a magical photography wizard.” 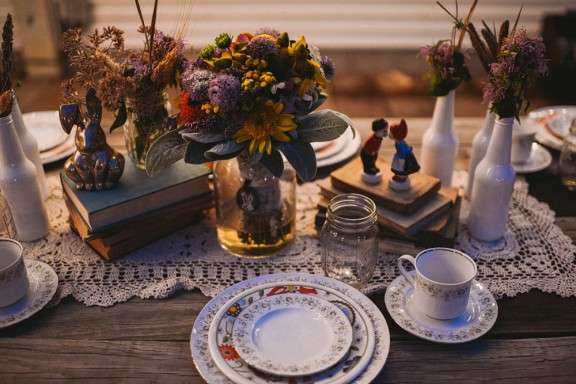 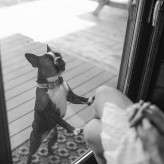 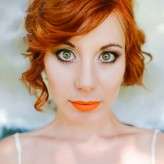 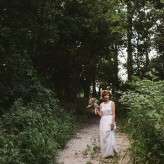 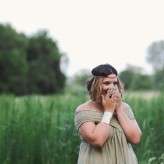 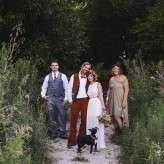 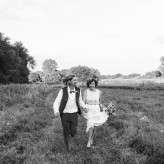 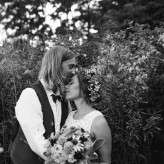 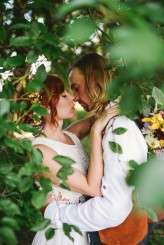