A wacky, fun and rainbow themed wedding is always going to be a winner with me, and seeing Melanie & Michael’s day, at Cocoanut Grove in Santa Cruz, was no different. I mean what’s not to love?! “When we first began planning our wedding, we started with a list of things we didn’t want to do”, began Melanie. “We had been to enough impersonal ceremonies and stereotypical receptions in the past few years to have acquired a pretty substantial list! We wanted the event to be as engaging for the guests as for us, we wanted it to be silly but meaningful, and we wanted it to be the most fun wedding anyone had ever attended.” 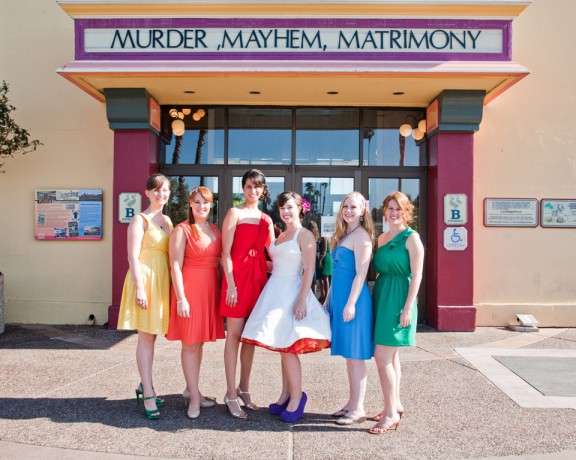 “I’m a production manager for a theater company, and he’s a writer and director, so we began to think of the wedding as ‘the show we’re doing this summer’. We wrote a script which included a variety of movie music cues, kids in Halloween costumes throwing confetti instead of flower petals, and ‘readings’ by members of the wedding party. These ‘readings’ included the ‘Mawage’ speech from The Princess Bride, the Donny Eulogy from The Big Lebowski, ponderings on the nature of the Force by a fully-costumed Yoda, and a commissioned poem on the importance of love comprised completely from popular song lyrics.” 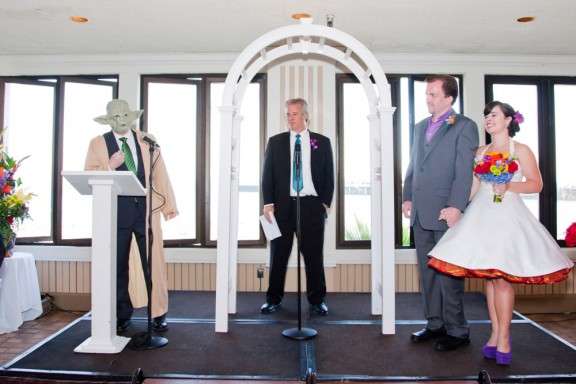 “Mike walked down the aisle to the theme from Superman, and my folks and I danced in to the theme from Austin Powers”, she continued. “But while it was all silly and delightful, the meaning of the day was never lost in the fray. We used a ribbon wrist-binding ceremony as a way to bring more people we loved into our joining (my Grandma tied a triple knot with hers…) Before we said our vows, our officiant (my wacky uncle) asked the audience for their vow first – to love and support us in our new union. The ceremony was awesome, and it segued seamlessly into an equally awesome party.” 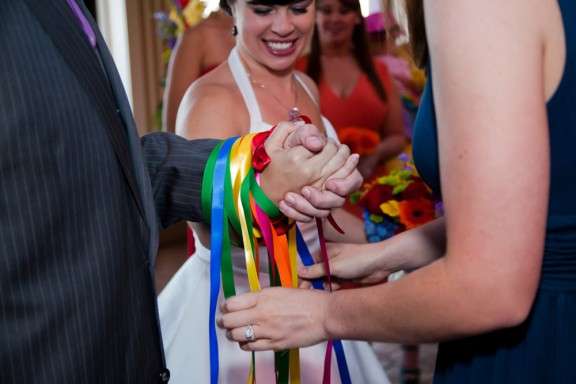 This couple really went all out with their rainbow theme, starting with Melanie’s dress. “I found it dang near impossible to find a ready-to-wear halter dress with a circle skirt that had room for a rainbow petticoat underneath. Luckily I then found Ramona Ponce. She had already volunteered to build the petticoat, so when I had a hard time finding a dress to go with it, she said she could just build the whole dress from scratch. She built the petticoat first, and it ended up being too fabulous to keep hidden for the whole night, so she made the top skirt removable – I had a convertible dress!” 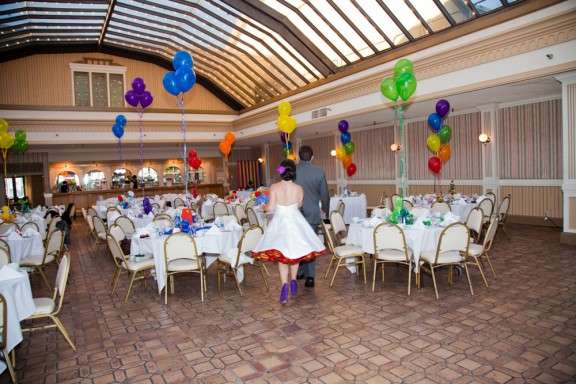 “Everything was organized by color”, she continued.”Our wedding party were dressed in rainbow order and the centerpieces were each one color with matching toy. We had balloons, matching m&ms in custom shot glasses and our cake was a delicious rainbow cake. About half the table markers were Muppet toys, and the other half were movie superheroes – the kids (and adults) were very excited to take those toys home with them at the end of the night!” 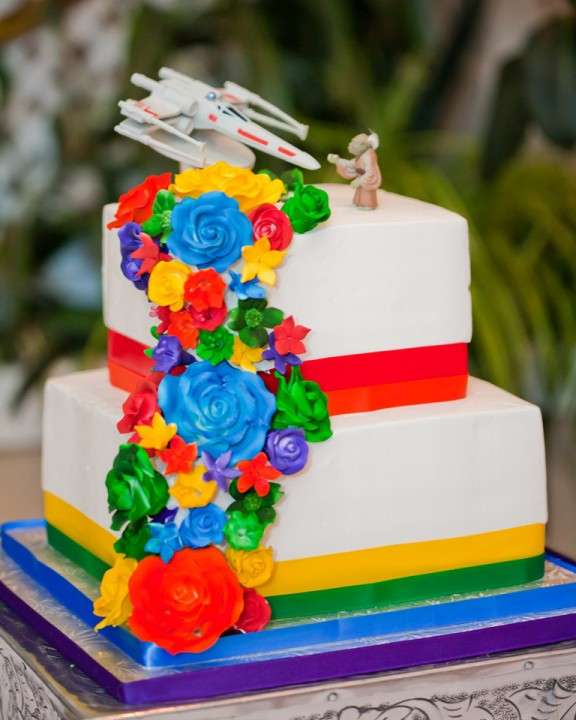 “One favorite moment from the evening was the wacky re-entrance of the wedding party into the reception”, Melanie concluded .”One of our groomsmen had asked if he could change into a ‘promoted suit’, which is a suit where the sleeves of the shirt and coat have been removed to give a full-blown frat-boy look. Of course we said yes, and in the moment, his costume change inspired the whole wedding party to come up with ridiculous entrances. Folks grabbed whatever they could find to make an impromptu costume change, including a Lego bucket, sparkly star wire and paper bags. We all came dancing in to James Brown’s ‘I Feel Good’, and the party had officially started!” 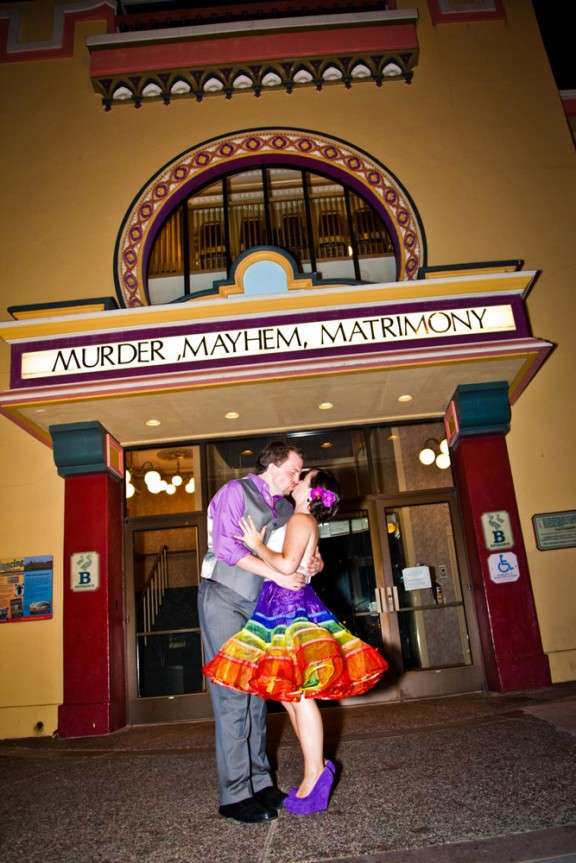 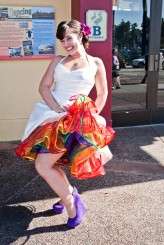 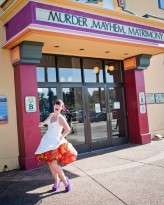 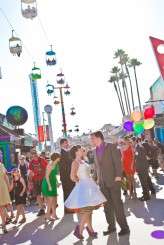 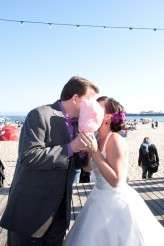 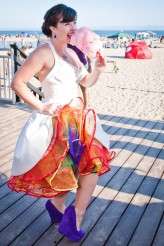 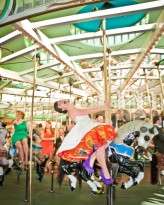 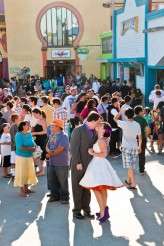 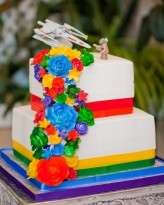 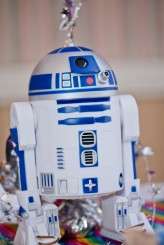 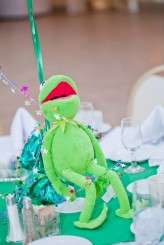 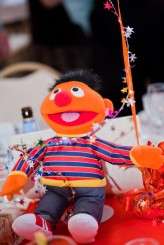 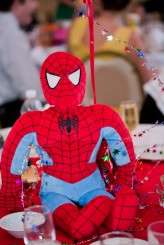 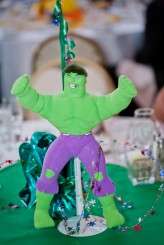 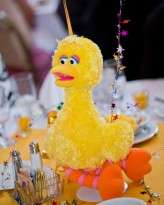 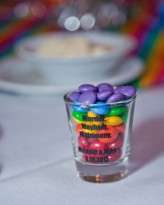 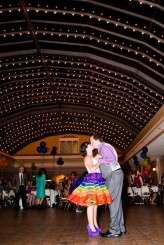 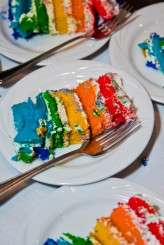 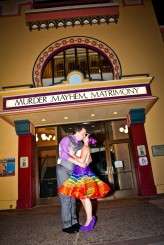 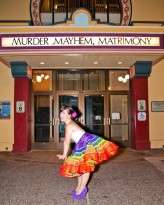