Bunting is still an incredibly popular decor idea for weddings this year, so I thought a super simple and quick DIY tutorial would probably help a lot of you out! Thank you to blog reader Erin for putting this together for us. You can see more of her DIY ideas over on her own blog Little Red Riding Hood. If you are doing DIY projects for your own wedding and fancy submitting a tutorial idea, just drop me an email with a brief outline and some photos and we can chat! OK, over to Erin…(nice feather boa hat by the way!) 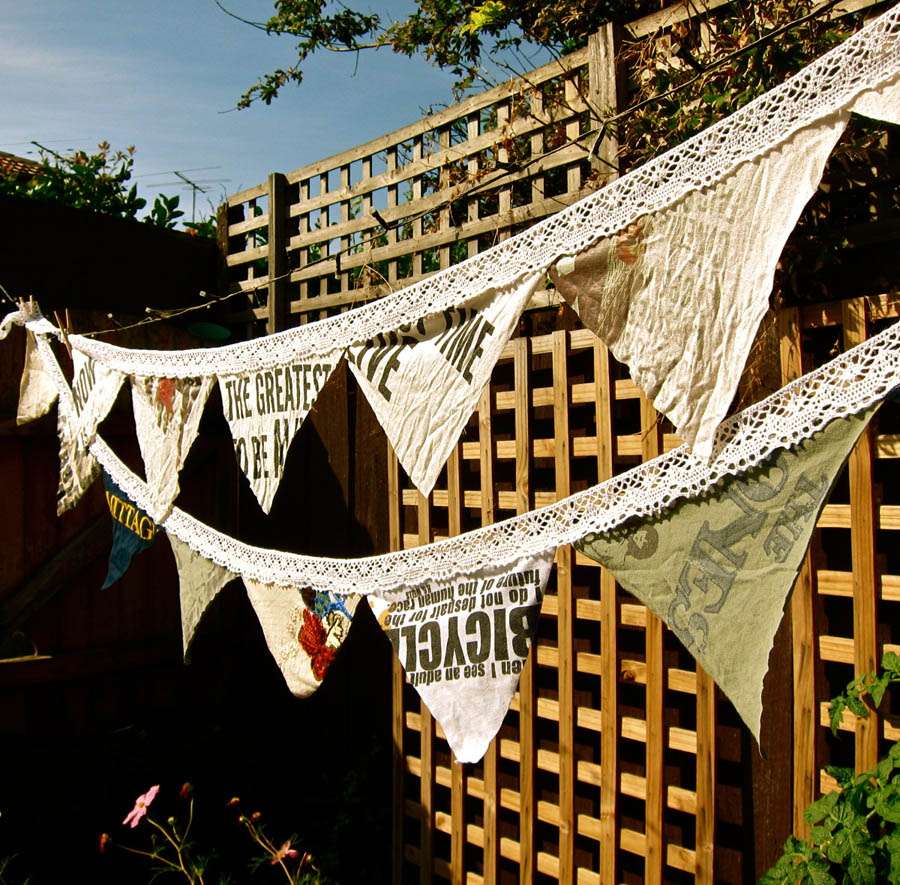 I grew up in country Victoria, but moved to inner bayside Melbourne to be with my partner after returning from some amazing adventures living overseas. In everyday life, I work as a five-star hotel sales executive and event manager. This sounds glamorous, but mostly consists of lists and finding the right length trestle table (usually at 5:30pm on a Friday…) When I’m not riding my vintage bike or sipping third-wave coffee with the hipsters in South Melbourne, I like to garden and read. I also like to bake and craft, but sometimes these things don’t work so well for me – I recently worked out that I can excuse these “experiments” by blogging them!

♥ Old t-shirts, or any material, really (Check the off-cut bin at your local op-shop!)
♥ Lace or ribbon for edging
♥ Sharp scissors
♥ Ruler, pen and paper

Step One: Prepare your material. Inspired by the t-shirt bunting made from David Fleck’s designs I saw a while back, I dug out some old t-shirts and material scraps I have hoarded saved.  You may need to allow an extra hour or so of time to do the digging – I found some lovely gold and plum material that I didn’t know I had. 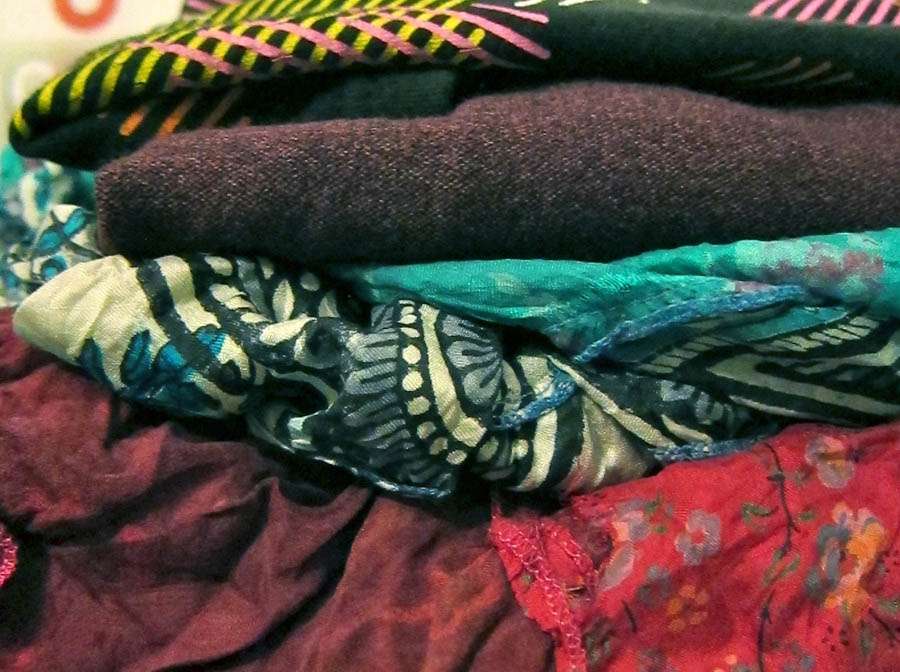 Then I found a feather boa (er….four father boas, actually…) put it on and tied a yellow scarf around my head. 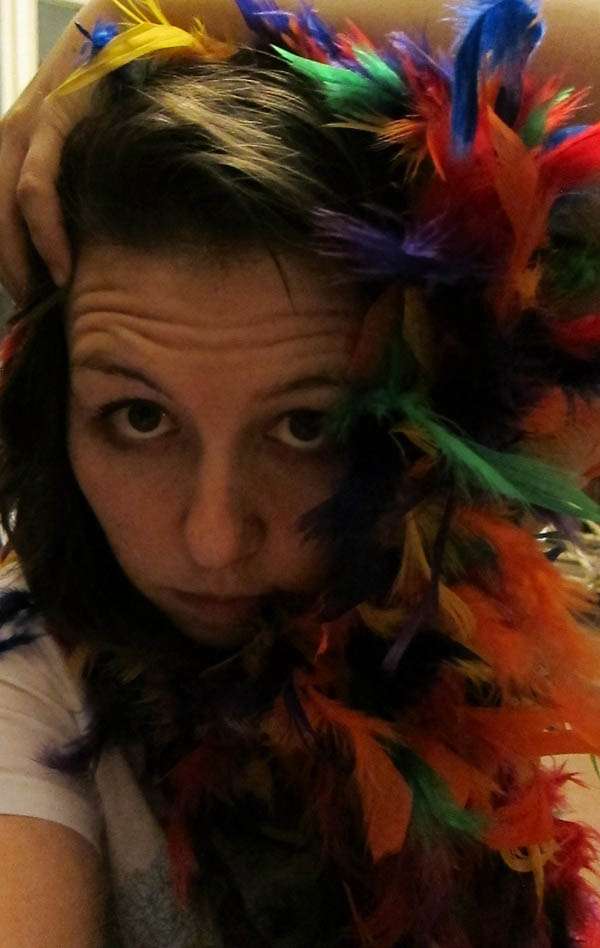 Some of the t-shirts I’ve worn and worn and had to retire but one was an obnoxious neon colour I bought from JayJays back when I paid to go to festivals like Big Day Out.

Because I didn’t intend to make a great deal of bunting, I simply chopped out the bits of the t-shirts that I liked, and didn’t worry about the rest of the shirt.  They’ve gone into a rag-bag to stuff felt flowers with or something involving buttons.

Step Two: Create your pattern. I tried a diamond shape cut-out, thinking I’d fold in half and edge the triangles. After I did one, I decided I couldn’t really be bothered to do edging on these particular bunts (I don’t care if that’s not the singular word for bunting, I’m using it anyway). 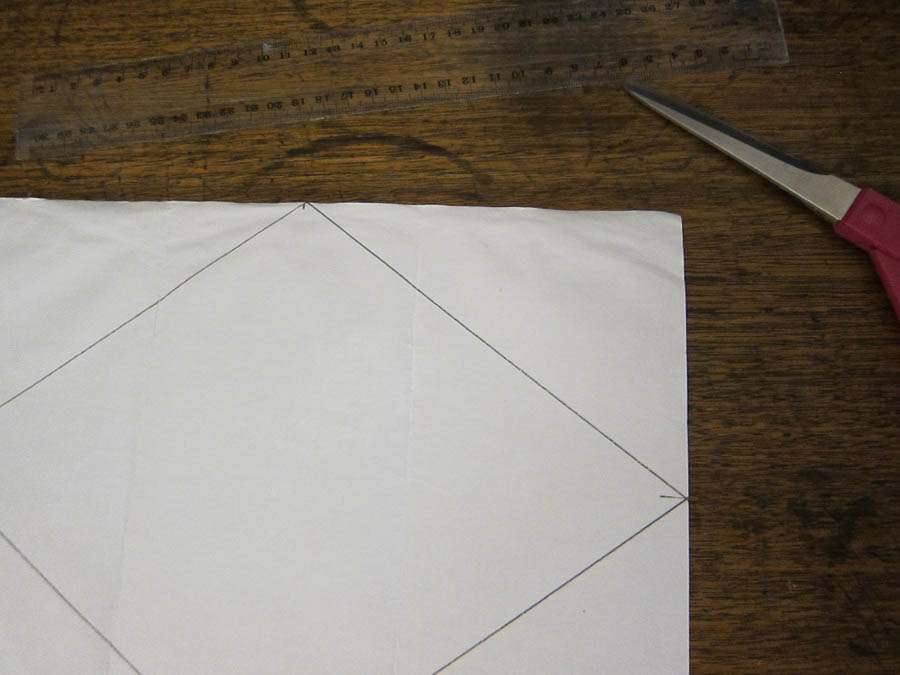 Also, some of the bits I liked were odd shapes, and didn’t really fit on the diamond shape.  I reverted to cutting simple triangles, using a template to make sure most triangles were the same size. Same size-ish, anyway. 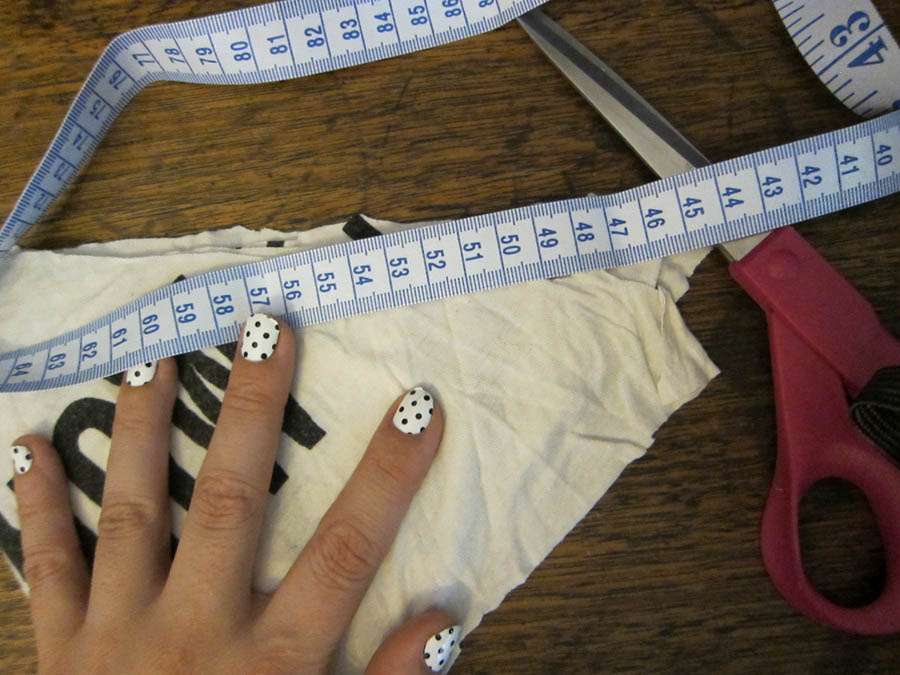 Step Three: Bring it all together. I laid out all the triangles on the floor and switched the order until I was happy with the overall look and mixture of triangles.  You can do this too, unless you’re a bit um, aesthetically challenged! (In which case, get a creative friend to tell you where you’re going wrong). 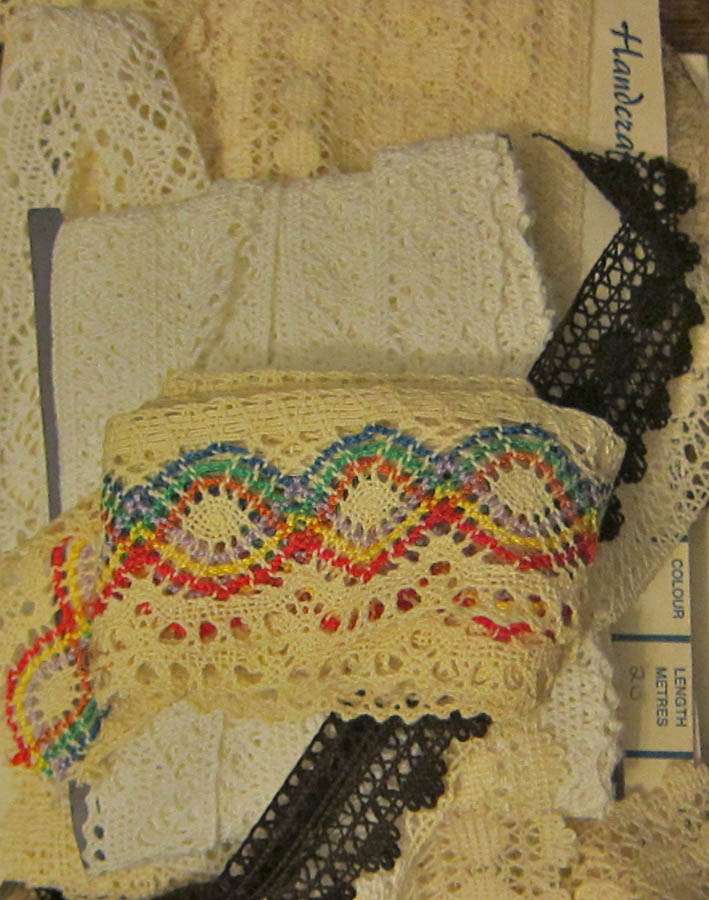 For the last two years, I’ve been trying to think of things to do with some lace my mother gave to me.  I have three four five different colours, and this lace is like the proverbial packet of Tim Tams. If you need some lace, I have white, cream, brown and a curlier cream and brown version. There’s also some rainbow lace but I love that too much to give any away, so you can’t have any of that. 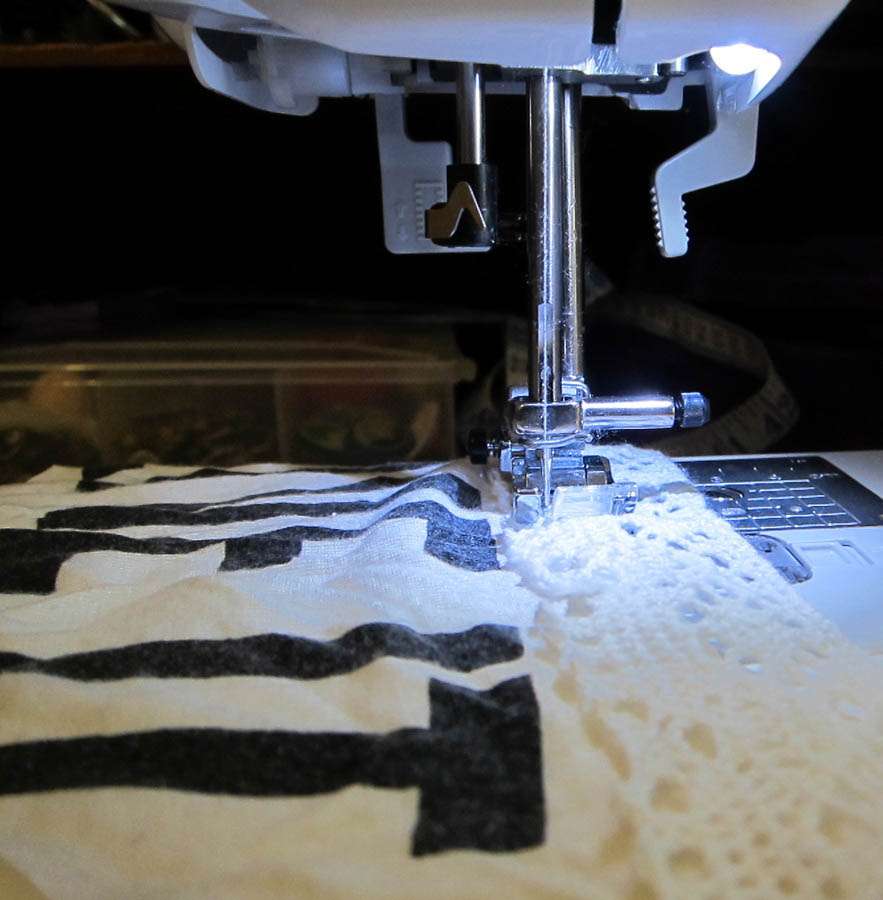 Step Four: Hang it up and have a wine or a little dance, your choice.

This bunting was so simple, I made another string of it while I had the white thread on the sewing machine.  Handily, I have a fireplace with a nail either side.  I’ve often wondered what the previous tenants put there, but now I know.  BUNTING. 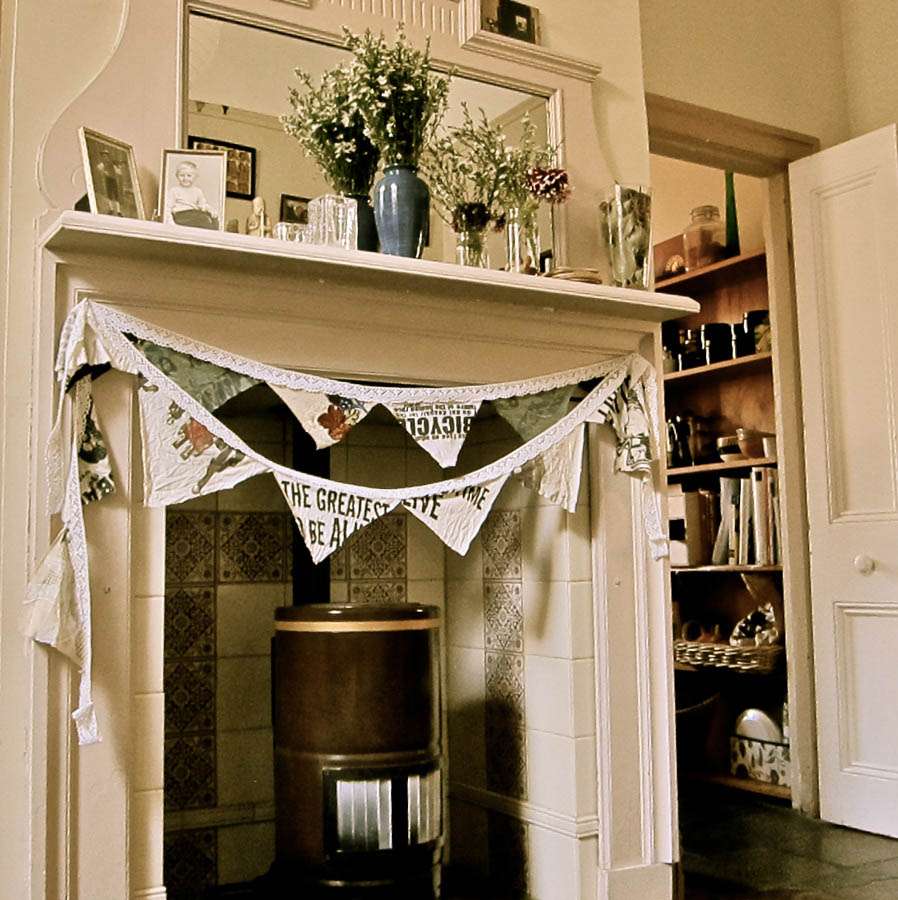 I can see why this project is so popular with all the DIY brides hanging out on Pinterest. It’s super quick, cheap, personalised and easy enough that you could get non-sewers involved. Your only challenge is going to be stopping – once you get going, you may well think “Oh, I’ll do some nice leopard-print bunting now, and then I’ll do some with that 80’s tribal print material my grandmother gave me and I wonder if there’s any way to incorporate those old necklaces….”