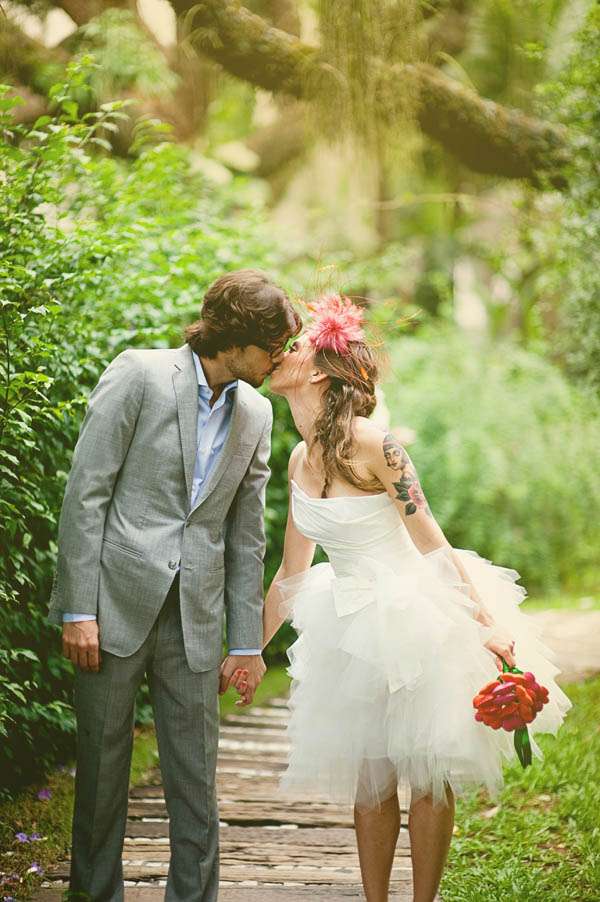 Organised in just two months, Juliana & Tomas’ wedding was held in Brazil on the very date that they first met. The bride explains, “Tomas & I met two years ago through a mutual friend. At that time, Tomas lived in New York and I lived in Sao Paulo. In December 2009, Tomas went to Brazil to work and our friend invited him to spend New Year’s Eve in a house I’d rented at the beach. We spent 6 days together and, two months later, we met again, but this time in New York. We started a long-distance relationship, which lasted just 4 months, because I decided to come to New York. My plan was to spend a season in New York, study and invest in our relationship. Back then, we were very uncertain about our relationship’s future, but now we have no doubt we made the best decision.” 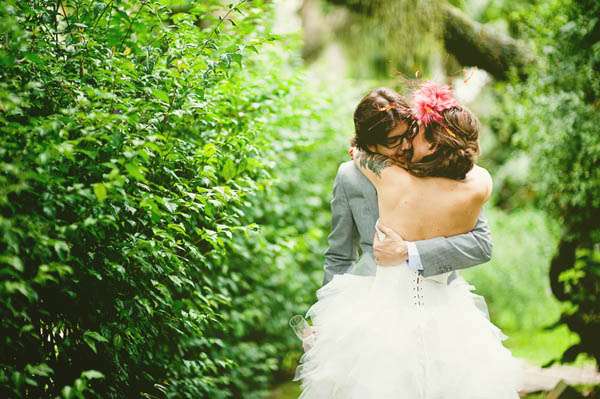 “At the end of October 2011, he proposed me and the only thing that we were sure at that time was that we would get married in Brazil in the same date that we met. The tough part – we had less than two months to organize our wedding. We wanted a small wedding, just the closest friends and our family, but Tomas also wanted a ‘wedding that didn’t look like a wedding’. We wanted a party with our touch, our style.” 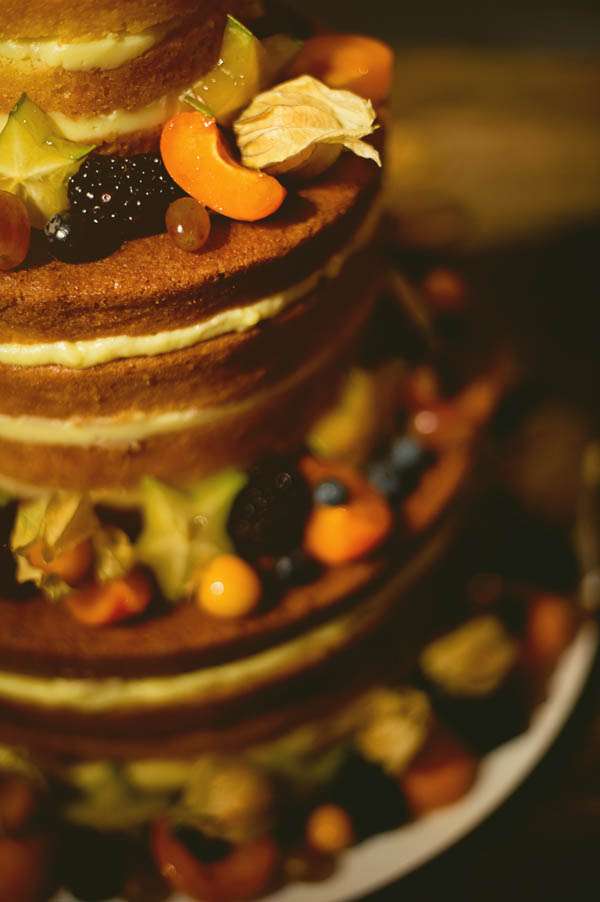 “So in order to do that we made as much as possible ourselves. We did our own wedding invitations, we painted jars, and we took care of every small detail of the party. We flew from New York to Rio de Janeiro with two bags full of decor items. We really wanted something different and unique, a non-standard wedding. We spent the morning before our wedding together at the hotel’s swimming pool, we helped each other get dressed, and we got dressed in the same room, where some friends stopped by for a pre-party.” 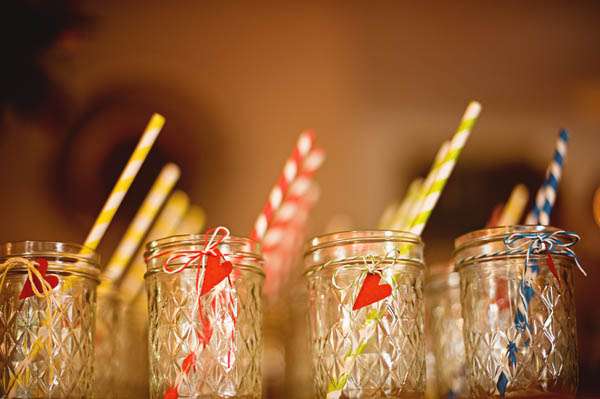 Juliana wore a Cymbeline wedding dress with a striking red headpiece and carried a homemade bouquet created out of felt hearts. “My dress added a dash of fun style and my bouquet and the wedding cake were also unusual. The ceremony was performed by our mutual friend, our parents and siblings. Chef Damien was in charge of a vegetarian menu. We left a Polaroid camera available to our friends and some of the most memorable pics were taken with the photo booth props. If you asked me what I would change in the wedding, I would say ‘nothing, it was a perfect party!'” 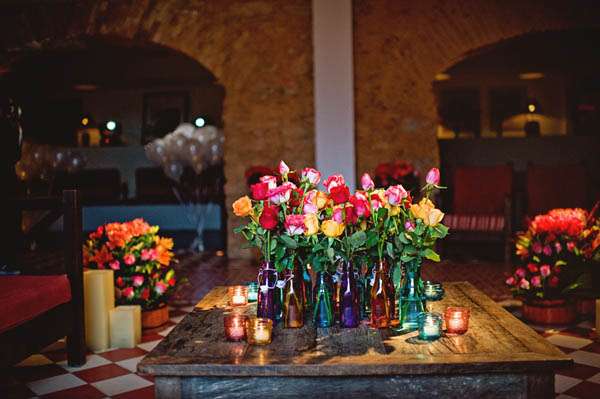 Stunning! Thank you to  Juliana & Tomas for sharing their wonderful celebration with us today. 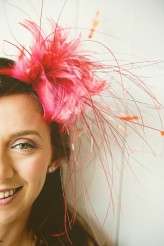 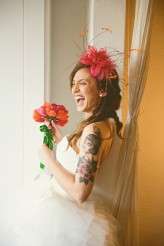 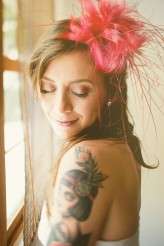 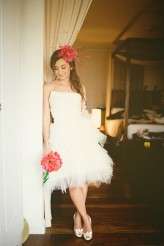 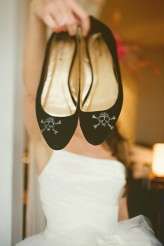 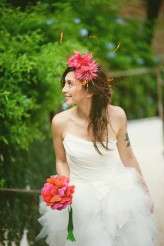 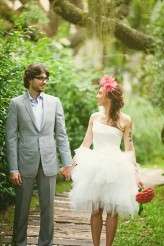 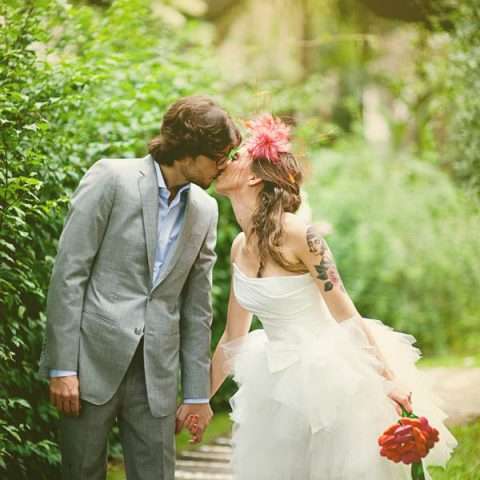 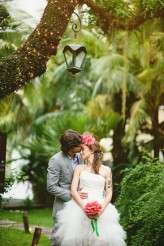 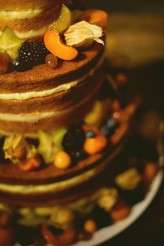 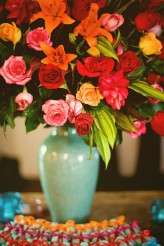