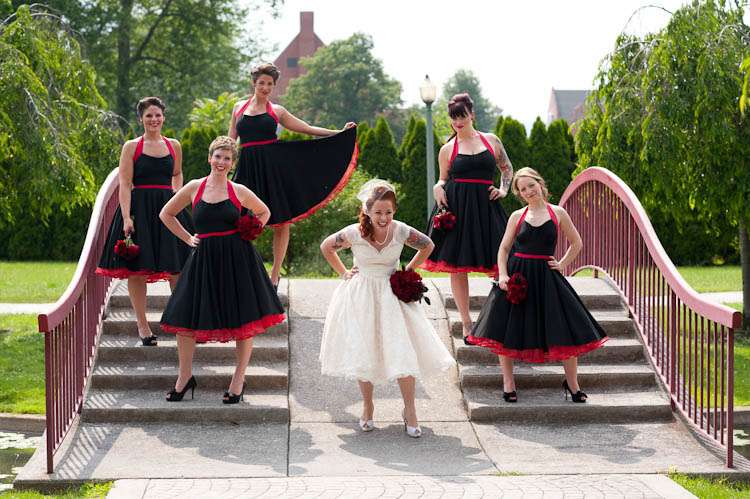 “Some people described our wedding theme as Rockabilly, but the only rockabilly music was played at the ceremony,” newlywed April told me. “We are punk rockers at heart, but listen to a wide variety of music in the rock genre.  We thought it would be very difficult to do a punk rock wedding and still keep it somewhat formal.  (Rich’s family is Catholic and I am not religious in any way.  We didn’t want to horrify his grandmother!)” 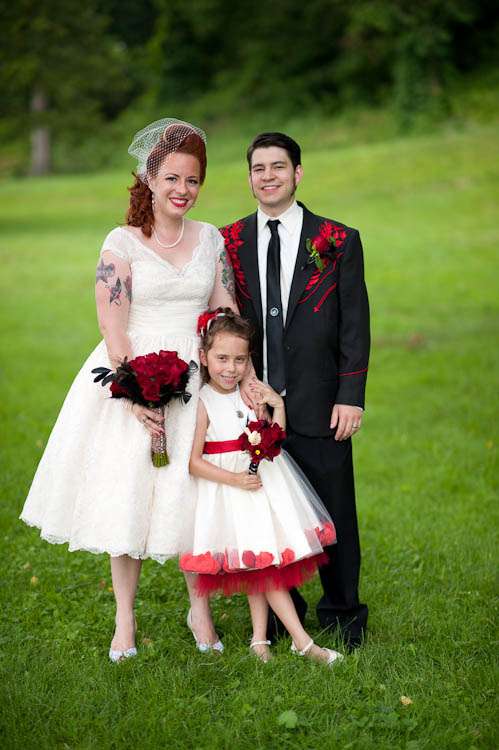 “We chose Johnny Cash, Gene Vincent and Wanda Jackson for ceremony music.  I walked down the aisle to “Rose of my heart” by Johnny Cash.   I had “rose of my heart” engraved in Rich’s wedding ring.  It was a surprise and when Rich saw it after the ceremony, he got tears in his eyes.  It was one of my favorite moments of the day.  My grandfather died exactly 3 weeks before the wedding.  He was a Johnny Cash fan, so this made it even harder to keep my emotions in check while walking down the aisle.” 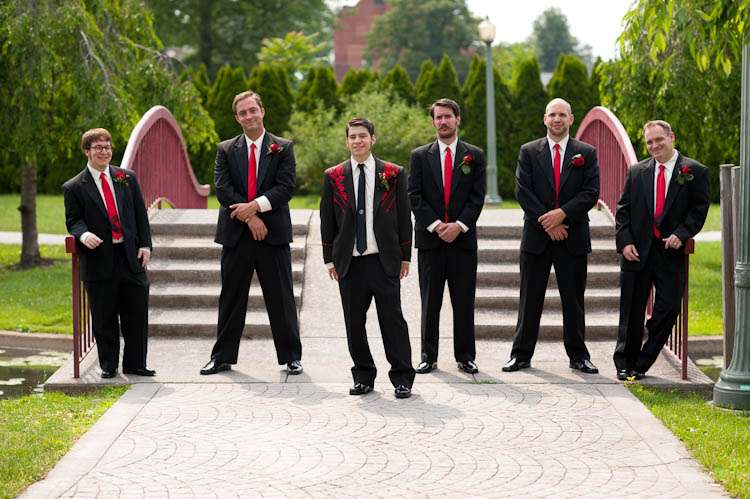 As you can see, music played a big part in April & Rich’s wedding. In fact a lot of the significant times in their relationship were down to music too! “Rich and I met on April 7, 1997 at a high school dance,” April continued. ” I was about to turn 16, and he was just a baby at age 14! I was a sophomore and he was in eighth grade.  I was seeing someone else at the time.  It was a very on and off relationship, and I was always miserable.  And full of angst! Rich was always trying to cheer me up.  We talked on the phone for hours every night.  I still remember the day that he told me that if I ditched Brian and started to date him and listen to Reel Big Fish, I would be much happier!  I took his advice, and the next two years were some of the best of my life” 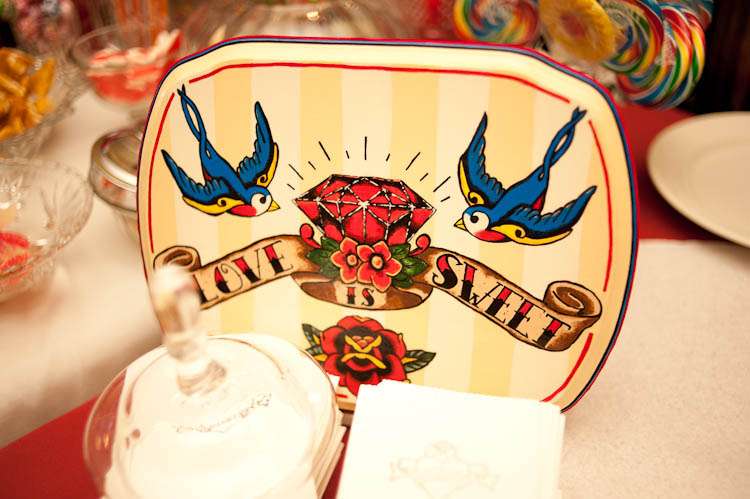 “We both love music and started going to shows when we could.  The first punk rock show we ever went to together was the Casualties.  We went with Amy (maid of honor) and had the best time.  (Of course, we snuck out of the fire hall to make out in the dug out for a while.)  The first big concert we went to was the Cherry Poppin Daddies, Green Day and the Mighty Mighty Bosstones in 1998. We met and had our picture taken with Dicky Barrett from the Bosstones.  We displayed this picture at the wedding. Rich was really into ska in high school.  I went on a trip to NY and bought him a hat at Moon Ska Records.  He still has it.” 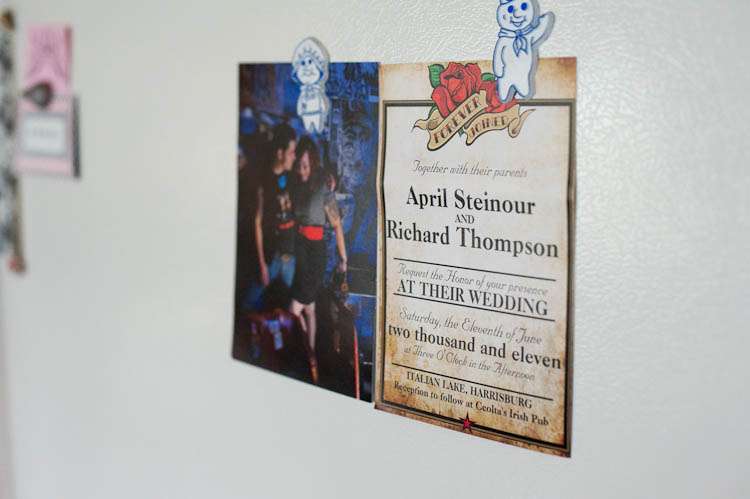 Obviously the wedding playlist was a vitally important part of the wedding to this couple and they spent a lot of time getting it perfect. “When coming up with the wedding playlist, we originally wanted to choose 1 song from each band we have seen live together.  But, we couldn’t find any appropriate Casualties songs!  We played 1 song by The Donna’s, my all time favorite band.  We went backstage with the Donna’s last year.  I was so excited and told my friend, ‘All I wanted to do in high school was meet the Donna’s and marry Rich Thompson! Dreams do come true.’  When we were in high school, Rich used to sing the song Totally by Screeching Weasel to me.  We used lyrics from this song on our save the date cards.  ‘Totally neat, totally sweet, totally knocked me off my feet.’  Rich’s Mom had our cake knife engrave with ‘totally neat, totally sweet.’  Rich and I both love Rancid.  We played ‘Radio’ (‘I never fell in love, til I fell in love with you.  Never knew what a good time was, til I had a good time with you!’)  We also played ‘Who would’ve thought’.” 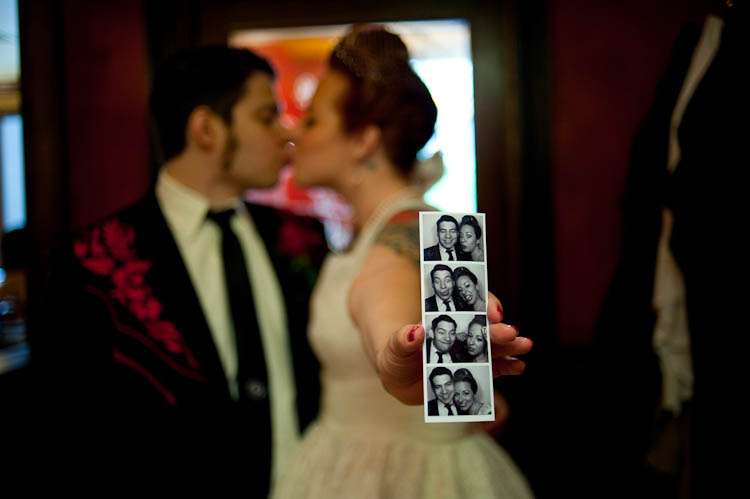 Awesome-sauce! Big love and thanks to April & Rich and their photographer Mike for sharing this wicked wedding with us today. 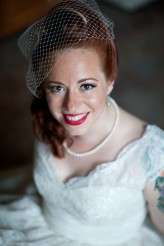 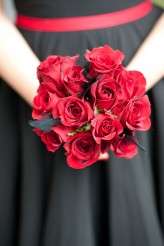 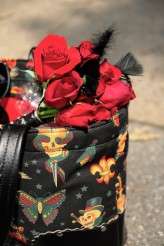 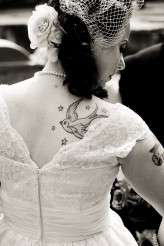 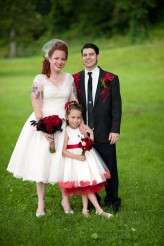 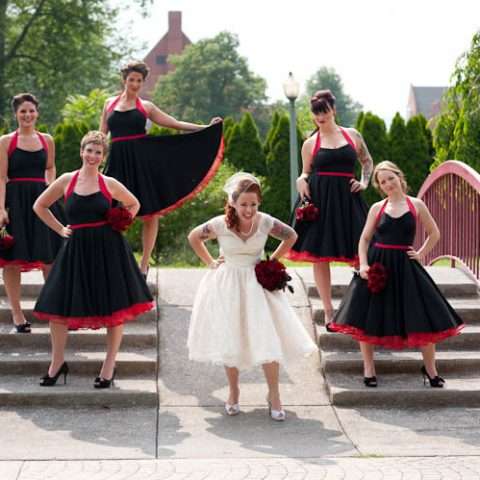 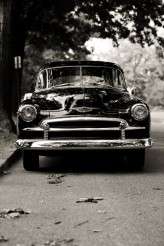 Kirsty met Oz when she went to work in his tattoo studio. "We're both tattoo artists and after several months of working together it became apparent that we were meant to be together", she told me. "Two years in, Oz popped the question. We spoke about our big day regularly, and we saved and saved like mad. After 12 months we decided to bite the bullet and book a date and venue. We continued to save and had some generous donations from loved ones to help us on our way."