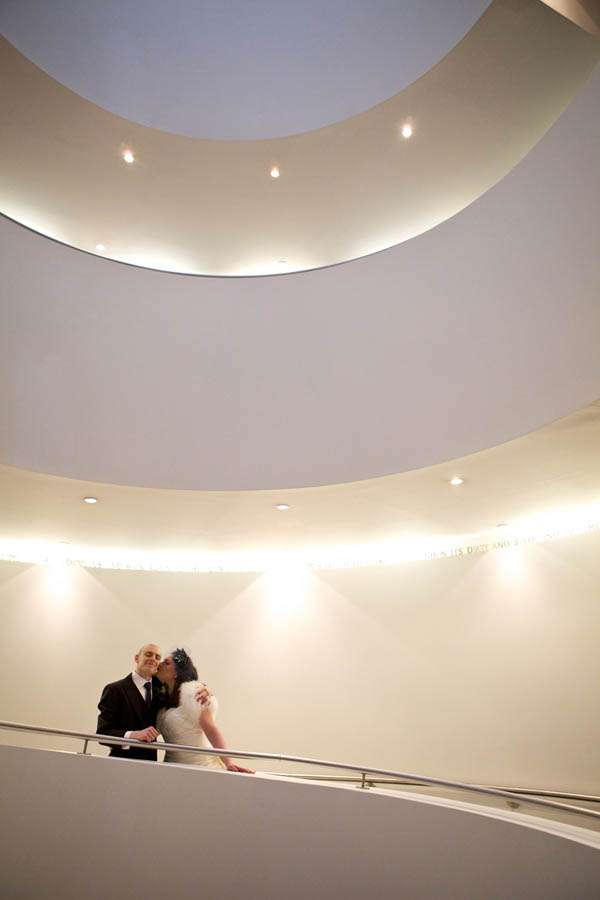 Rachel & Nicky were married at the super swanky Andaz Hotel in London. The bride read Rock n Roll Bride throughout her planning and I’m oh-so-excited to see some of my favourite touches throughout this wedding (that cake? effing awesome!)

“Nic and I have been immersed in music since we were young, we have both grown up listening to punk and hardcore and a massive spattering of Bruce Springsteen!” the bride told me. “We wanted to make sure that our day really represented this. From invitations that featured Springteen lyrics, tables named after Springsteen songs from Born to Run to Badlands. I wanted to make sure that the day was a total celebration and that everyone was smiling all the way through. I walked down the aisle to ‘Bring Me Sunshine’ sung by Morecambe and Wise, just stopping short of doing the walk/dance that goes with it, which raised a laugh out of everyone attending and we left the ceremony to Springsteens ‘Two Hearts’.” 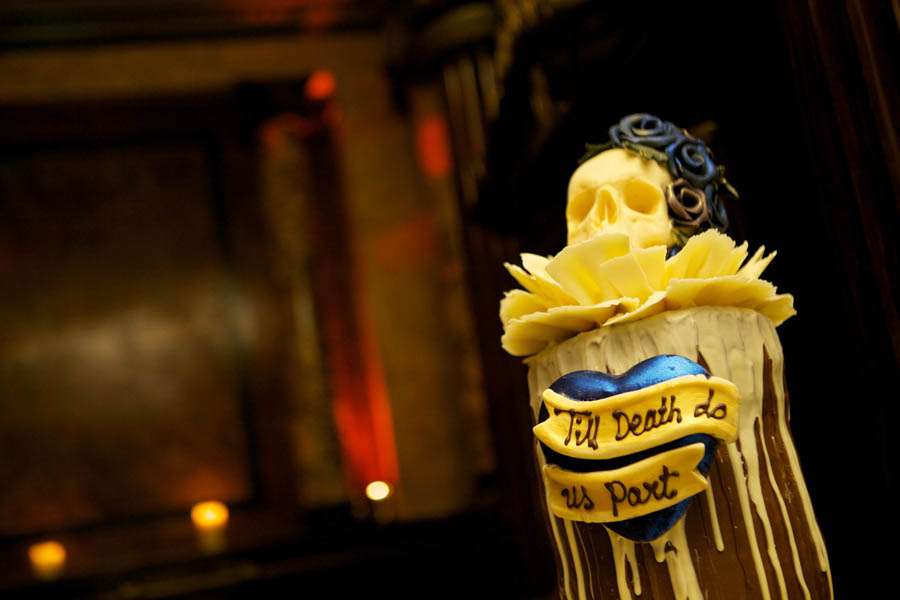 “Our cake from Choccywoccydoodah wasn’t the most traditional of cakes but it really represented our ‘dark side’! With a huge chocolate skull on the top and the tattooed ’till death do us part’ chocolate heart on the front, stunning and yummy. We always knew that if we got married that we would want to do it in Central London, we could never see the point of heading out to castles in the countryside as this had nothing at all to do with our lives. I have always found the City and financial district to be the most beautiful part of London, the incredible old stone buildings sitting between the sharp angles of glass and steel. I knew from the start that The Andaz was the place for us, I had dreamed of getting married here and having the reception and party in the old Masonic Temple that formed part of the hotel. We kept the temple a surprise and led people in there for the party, everyone was so shocked that there was room this beautiful tucked away. We partied away the night amongst the marble and gilt to classic rock mixed with a spot of punk, even our families danced along to Cock Sparrer’s classic ‘We’re coming back’! The whole day was our version of punk luxe.” 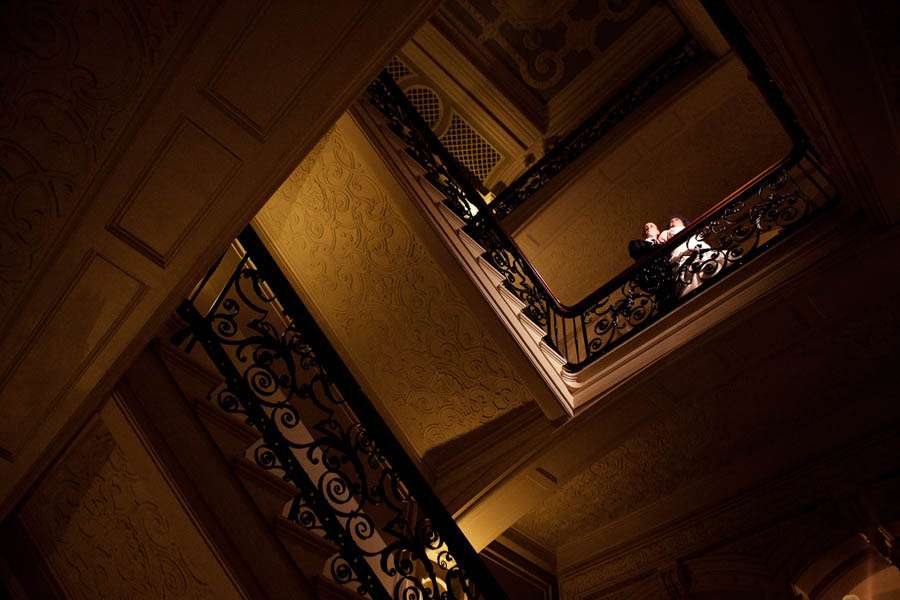 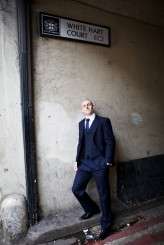 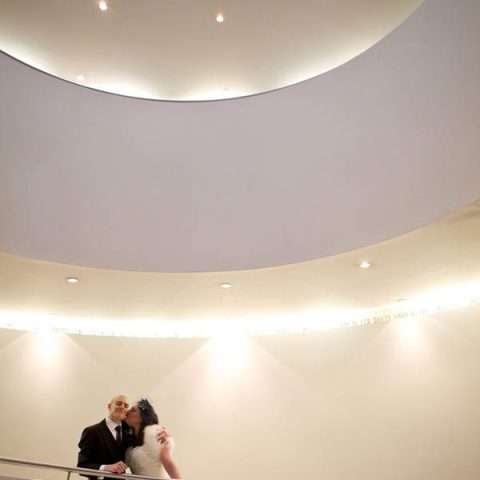 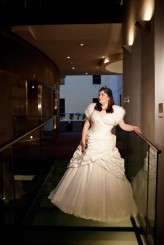 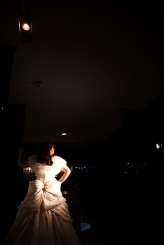 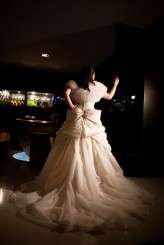 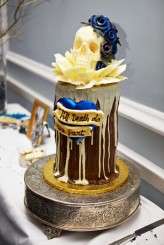 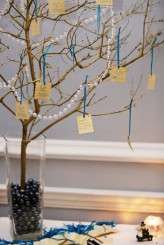 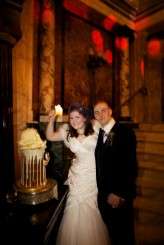 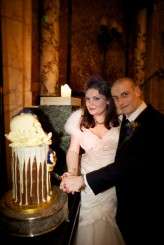 Kat and Andrew had a colourful wedding and took inspiration from the bride's tattoos and of times gone by. "We planned our wedding by the rule ‘do what you’d do if you didn't know what was done’, as we didn't want to go along with traditions that we didn't understand or necessarily agree with", Kat wrote. "We both saw our wedding day as an opportunity to throw a massive party for all of our family and friends, which made planning so much more fun! It’s far easier to be creative when you’re not preoccupied with what you think you ought to be doing, or with what you think people expect of you."

that tap into this theme. But I think Lotti is the best example of a Marie Antoinette bride since... well... me! In fact I think she actually steals my crown. The pantaloons, the white/grey hair, the shoes... her look is just perfect! "I’m an alternative model in my spare time and I've always been creative in my appearance so I was never going to go for something conventional for my wedding!" began the bride. "I’m very into period costume and I love the spectacular dress of the court of Versailles at the time of Marie Antoinette so I thought I would recreate some of the decadence and indulgence of the court for our big day! We chose the blue and white theme as this shade of blue was one of Marie Antoinette’s favourites. The toile de jouy fabric of the bridemaids dresses was also popular in Europe at the time. Kiku Boutique in Manchester dressed us all."