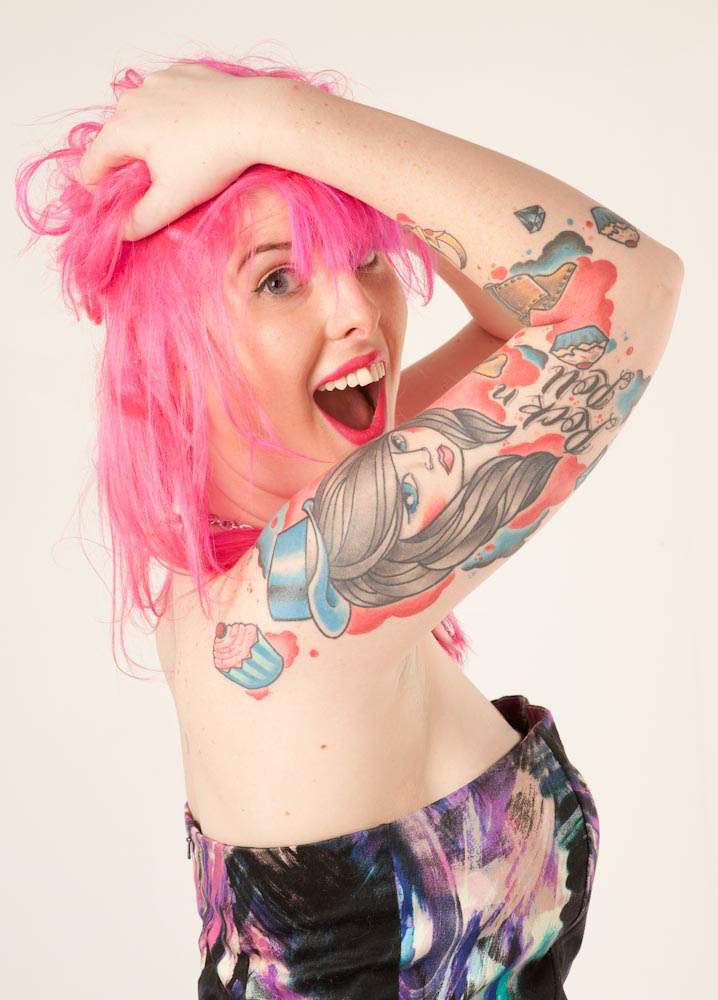 About a week ago, I got an email from my friend Amma telling me about a new book she’d just heard about. London Tattoos, was being put together by photographer Alex Macnaughton with the aim to photograph and document the stories of a diverse collection of tattooed people in London. I figured I had nothing to loose and so quickly filled in the application form. “I’m not the most tattooed girl out there,” I thought, “but it’s always worth giving these things a go.”

To my surprise I got a phone call from Alex just a few days later, last Thursday, asking if I was free to come to the studio to be photographed on Saturday! There’s nothing like short notice but I did happen to be free so I said I’d be there to get my ‘pose on’. Alex told me that his aim was to photograph tattooed people all frrom different walks of life, and so if I wanted to bring props or clothing to represent my personality and what I do for a living that would be great. Eek! I had 3 days to find an outfit that was both wedding-related but Rock n Roll, and awesome enough to be in an actual real life book! 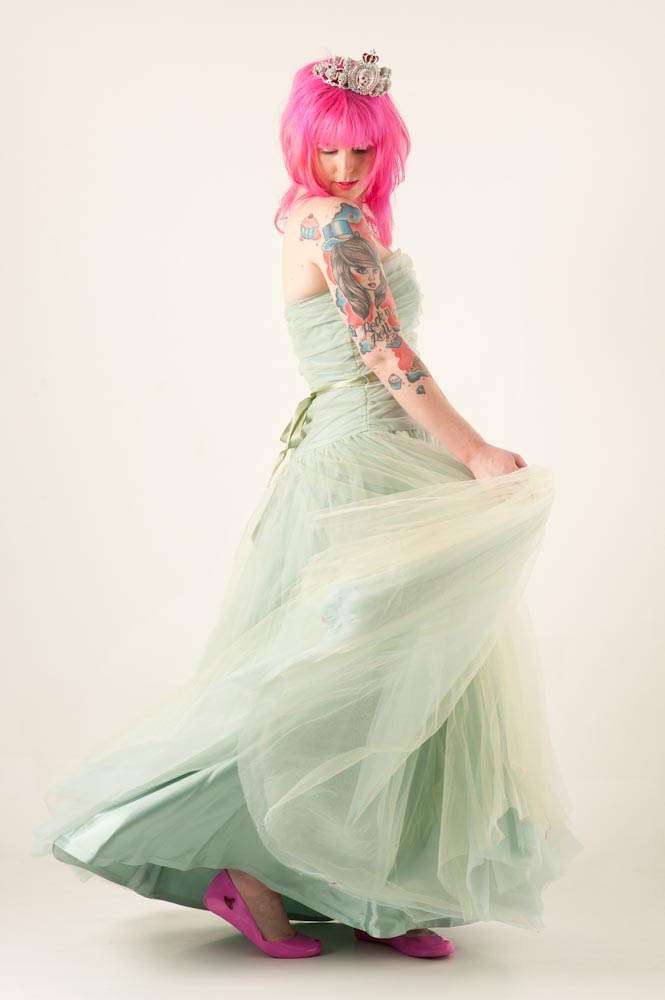 So I turned to Twitter and asked my followers if anyone had a non-weddingy wedding dress I could borrow and low and behold Clare of The Wedding Club in Birmingham messaged me saying she’d send me a selection of dresses to choose from. How lucky am I!?

On Saturday morning (literally 10 minutes before I had to leave – good old Royal Mail!) a box of 7 beautiful dresses arrived at my door step. They were a mix of vintage and modern and there was even a beautiful Temperley number in there for me to choose from. In the end, I selected this beautiful vintage gown – a stunning green, tulle number and I wore it with my Butler & Wilson crystal skull tiara (and yes, I’m pretty sure they did all think I was a little bonkers.)

I also brought along a multi-coloured dress from Therapy that I’ve had for years and a couple of my favourite pairs of Vivienne Westwood/Melissa shoes to represent my usual style of dress (no jeans and a tee-shirt for me!)

I arrived at the studio in plenty of time and had my hair and make up done. Being shot in a studio is a completely different vibe to being on location. It felt really chilled and jokey and less stressful in many ways. It was such a fun few hours, the whole team made me feel really welcome. I was even allowed to hang out afterwards and watch a whole bunch of sexy tattooed men get photographed. Oh its a hard life!

Alex is still on the look out for tattooed beauties to be photographed for the project. If you are interested in applying, go check out the website and fill in the simple form. The book will be available in all good bookshops in September. I can’t wait to see the final thing!

‘Rock n Rainbow’: An After the Rainbow Inspiration Shoot at The Photography Farm (+ Behind the Scenes Video)

I'm a huge Wizard of Oz nerd, so when wedding photographer extraordinaire Lisa Devlin asked if I fancied attending her first Photography Farm workshop to model in an 'After the Rainbow' themed styled shoot...well my biggest concern was whether I'd actually get to wear some ruby slippers...and you know what? I did!

I know what you're thinking...Christmas stuff already woman?! Well just hear me out would ya... I've known wedding photographer Ashton Jean-Pierre ever since we both went to Emma Case's wedding back in March. I don't think we managed to talk on the night, but after the event I saw some of his incredible photos (that he just took on his iPhone!) on facebook and so I got in contact to ask if I could share some of them on my blog. He said yes and we've chatted online ever since. Ashton is deaf which makes no differece at all when communicating online, but when he asked if Gareth & I would like to do a mini shoot with him I was a teeny tiny bit nervous on how we would get on it 'real life'. However I needn't have worried. Ashton is so expressive and animated that it's actually pretty easy to have a conversation, and although I didn't know any sign language before we met, we were easily able to chat by gesturing and using good old fashioned pen and paper to write things down.

‘Rock n Riot’ – Behind the Scenes Photos and Video

First of all, a big load of love to everyone who took the time to comment, tweet, facebook or email me about the ‘Rock n Riot’ shoot yesterday. As ever I have been blown away with your love and support. I’m thrilled with the results but I always have to go one step further huh? So today I have the behind the scenes shots from Emma Case and video awesomeness from Pete Smyth & Simon Clarke to share. But that's not all, the styling genius that is the Ava team have also kindly popped by to explain a bit more about how they executed this epic (this word keeps cropping up in relation to this shoot…but seriously, I don’t think anything else could describe it as well!) styled shoot.