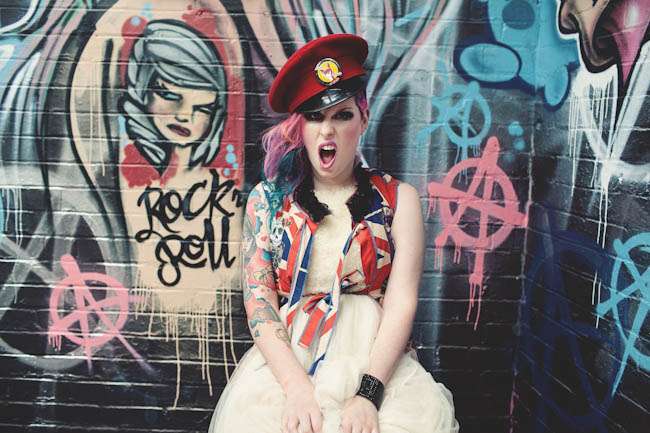 First of all, a big load of love to everyone who took the time to comment, tweet, facebook or email me about the ‘Rock n Riot’ shoot yesterday. As ever I have been blown away with your love and support. I’m thrilled with the results but I always have to go one step further huh? So today I have the behind the scenes shots from Emma Case and video awesomeness from Pete Smyth & Simon Clarke to share. 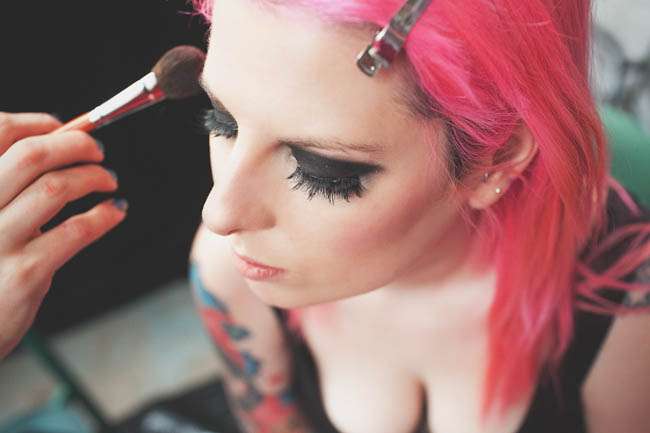 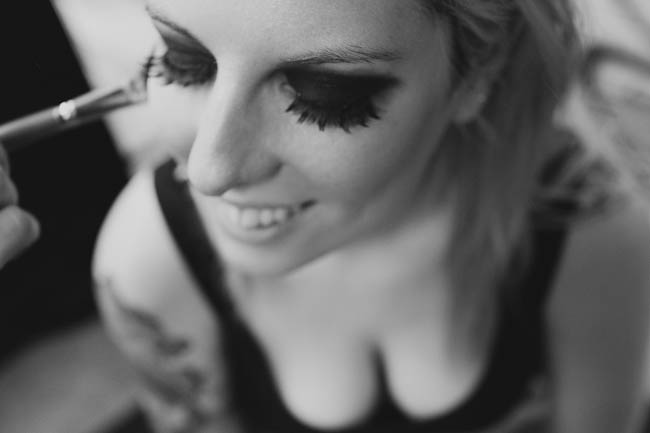 But that’s not all, the styling genius that is the Ava team have also kindly popped by to explain a bit more about how they executed this epic (this word keeps cropping up in relation to this shoot…but seriously, I don’t think anything else could describe it as well!) styled shoot. 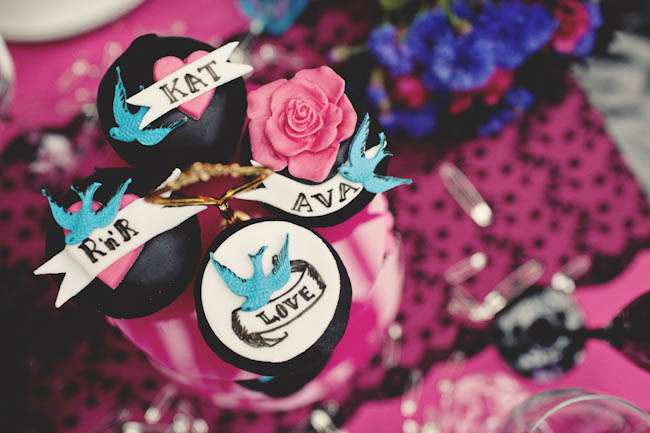 Amy Grzegorzek, one third of Ava Event Styling explains, “When we’re given such an out there brief as the punk riot, it’s important to do our historical research first. It’s a big part of our styling process and something we relish, working out which are the key elements of a particular era is like cherry picking from a giant visual cake! Punk was such a massive part of changing peoples opinions not only on how we looked but how we look at each other. It had its biggest impact in the 1970’s but it opened the floodgates for the diversity in fashion we enjoy today. For Ava this meant we could push the boundaries, using products and props not normally associated with weddings. Safety pin table confetti, taxidermy and a black skull & cross bone wedding cake… Not your normal day in the registry office!” 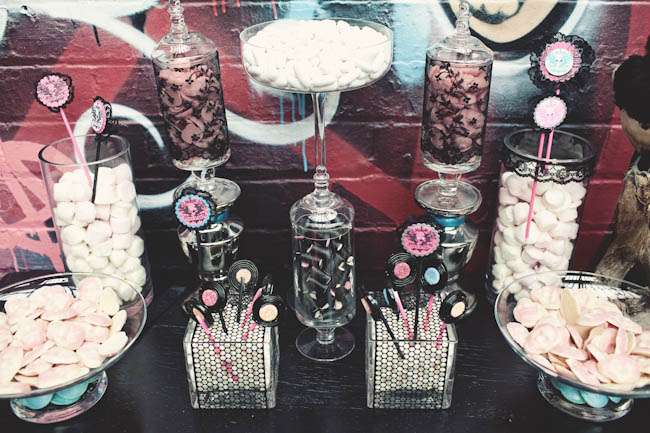 “Even the neon food colouring used for the cupcakes had to be imported from the U.S. and they were decorated to complement the tattoo theme of the day. A feature of our work is the level of detail we strive to achieve, from the the huge scale personalised graffiti wall down to the pink sticks in the cake pops. It’s this kind of attention to detail that pulls together such an avant garde theme.” 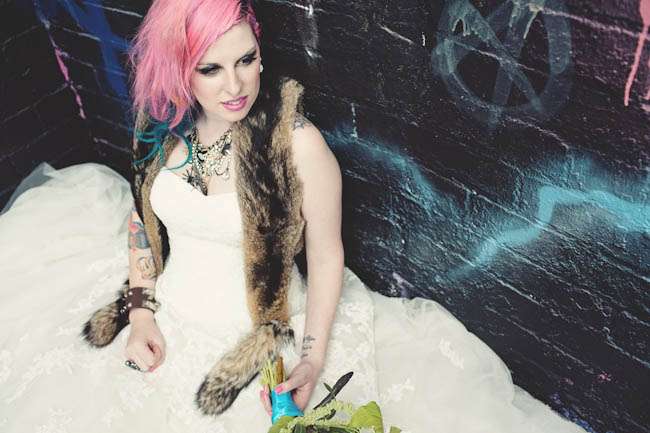 “The flowers used were a mixture of English garden classics and structural tropicals put together more for there textural clashes rather than prettiness. We love to challenge the preconceived ideas in all areas and break from the norm. We are really lucky to be surrounded by like minded independent business owners wanting to do something different. Clare at The Wedding Club let us have free reign to select from their incredible dress collection and was keen to get less well known designers showcased. We even used a dress from a final year fashion student Hannah Wilkins-Webb, it’s important to us to encourage new creative talents. Terry Terry jewellery stepped right up to the mark too with his stunning funky range punk inspired bling.” 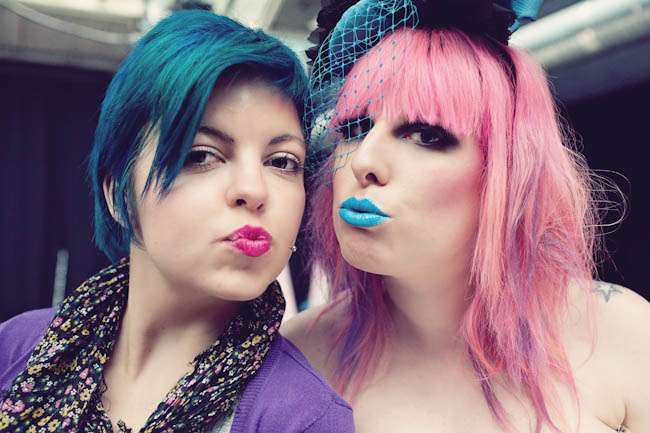 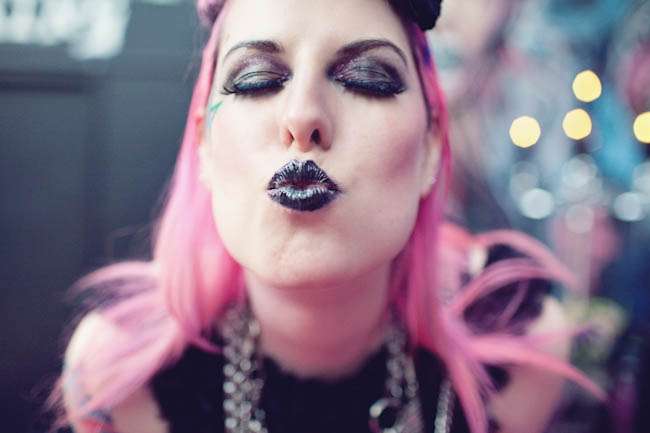 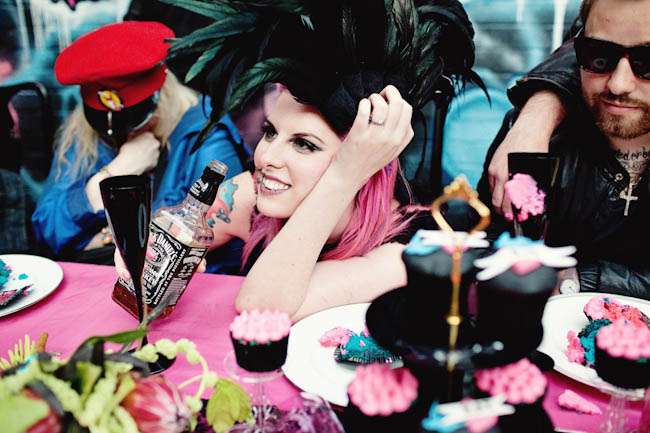 Pretty awesome hey? Man, I love these guys – they make me look good! Enjoy, and don’t forget to watch the video below (and have a little dance) it rocks.

Anyone that knows me will know that I'm terrible at keeping secrets...so this has been very very hard for me to keep schtum! Last week I got an email from Richard of FX Films (based in Oxford) asking if he could pop round and make a little film about little me. Of course I jumped at the chance. I am a big show off after all! Stand by and prepare yourself for some serious awesome. Richard is an actual genius - he made me look so good and the music choice is utterly perfect! The only thing I stipulated was that Henry & Rachel my Maine Coon kitties were in it (and they stole the show didn't they!) Oh the cute... So here's me on a 'normal day' - getting up, kittens, make up, blogging, shoes, car (I love my car!) and hanging out in the park. So. Much. Fun. If you're on the lookout for a funky, fun filmmaker for your wedding, engagement shoot, save the date etc then be sure to go check out his website. I can not rave enough how much fun this day was and how easy he was to work with.

About a week ago, I got an email from my friend Amma telling me about a new book she'd just heard about. London Tattoo, was being put together by photographer Alex Macnaughton with the aim to photograph and document the stories of a diverse collection of tattooed people in London. I figured I had nothing to loose and so quickly filled in the application form. "I'm not the most tattooed girl out there," I thought, "but it's always worth giving these things a go."