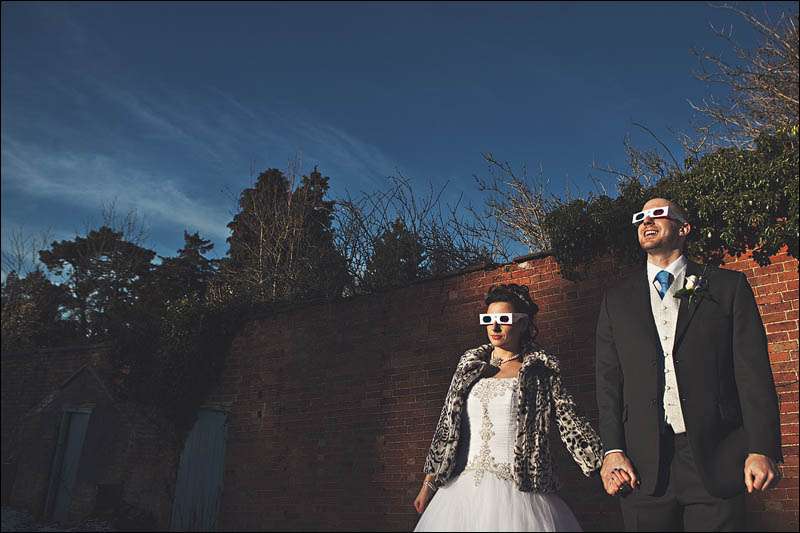 Abbie & Steven found a lot of their wedding day inspiration online, including Rock n Roll Bride, which makes their wedding a very special one indeed. I’ve followed the bride on Twitter for the last few months in fact so I do feel a little bit like I’ve been along for the ride of their wedding planning!

“I don’t think we ever set out to be different just be ourselves. We never liked the ideas of themes as it can often just become gimmicky and lose sight that it’s actually a wedding and not some theme party,” Abbie told me. ” Ensuring it felt like a wedding was really important to us but we didn’t believe that meant keeping it traditional. This is not an easy balance to strike, it’s not about rebelling for the sake of it but picking and choosing the things that mean something to you.” 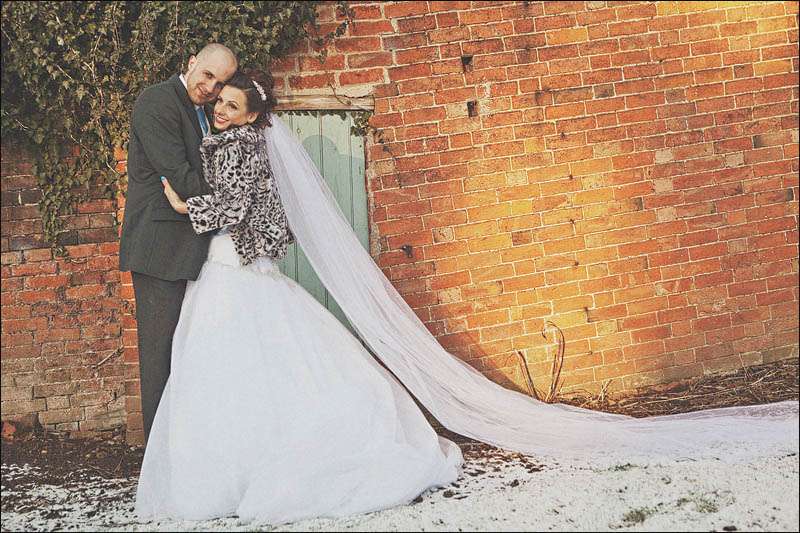 “Making decisions about the day was a pretty organic process; we either saw things we liked or bounced ideas around, although Steven lived in fear of my wedding mantra ‘I’ve had an idea’. So the day ended up being a bit of a hotchpotch, which kind of defies definition which suited us fine. Being a bit of a twitter geek that was probably my main planning and ideas tool. We found our photographer, hair and make-up, jewellery and shoes using Twitter. Using Twitter was great as we were able to build up some really good relationships with our suppliers before the wedding, especially with Chris and Dani the photographers and Elbie Van Eeden the hair and make-up artist. We got so much more out of the experience because by they knew us and knew what we liked, our style and the kind of day we wanted to have.” 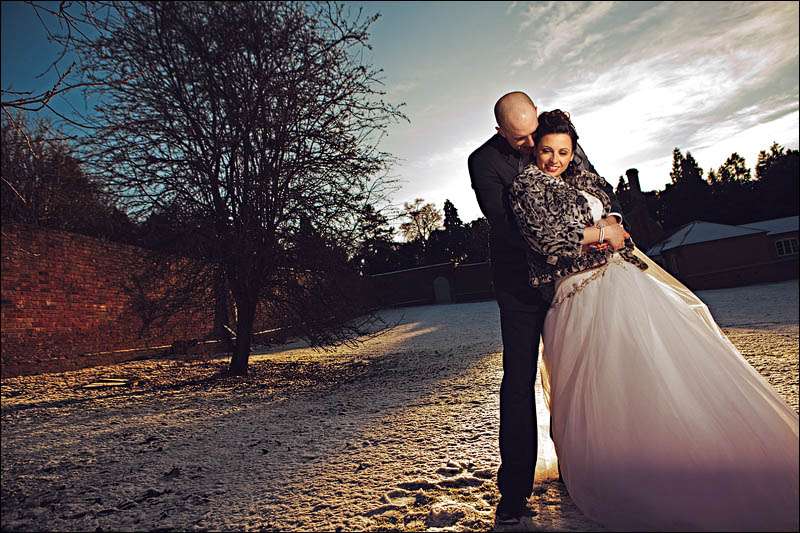 “I feel like I have to tell people about how amazing Elbie is, she worked so hard on the day and she is immensely talented. I didn’t want the traditional bridal look, I wanted something a bit more dramatic and Elbie just ran with this and came up with something amazing. I’m sure she’s a little bit magic. The photographers Chris and Dani were absolute stars they not only produced the most fantastic photos but managed to put everyone at ease. We wanted them to feel part of the wedding so they sat with some of my relatives during the wedding breakfast and when I was speaking to the relatives later they said that Chris and Dani felt like part of the family.”

Abbie wore a dress from Tom Flowers and amazing glittery shoes from Schuh. I am also a HUGE fan of her faux fur leopard print coat which was a last minute addition for the portraits in the snow! The couple did a few DIY projects including the groom making the giant cupcake and the couple using horse shoes from Abbie’s Dad’s horses as part of their décor. 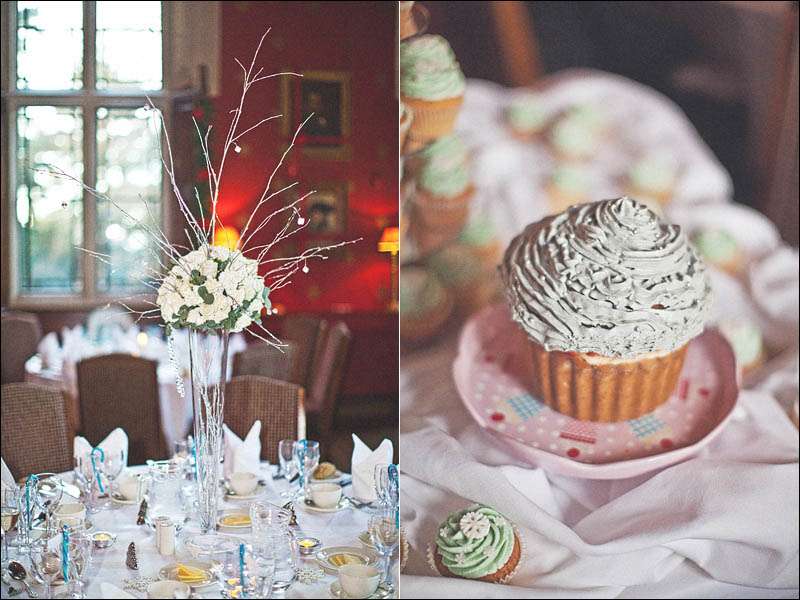 “You can try and plan every minute to be perfect but there will always be those things that come out of left field that you can’t control”, concluded Abbie. “At our wedding, one of my best friends waters broke at the start of the ceremony, snow prevented a table of guests from actually getting there and within 5 minutes of exiting the ceremony a guest spilt mulled wine all down my dress.  You just have to take these things in your stride, it’s the stuff you don’t plan that you will remember later (in a good way, honest).” 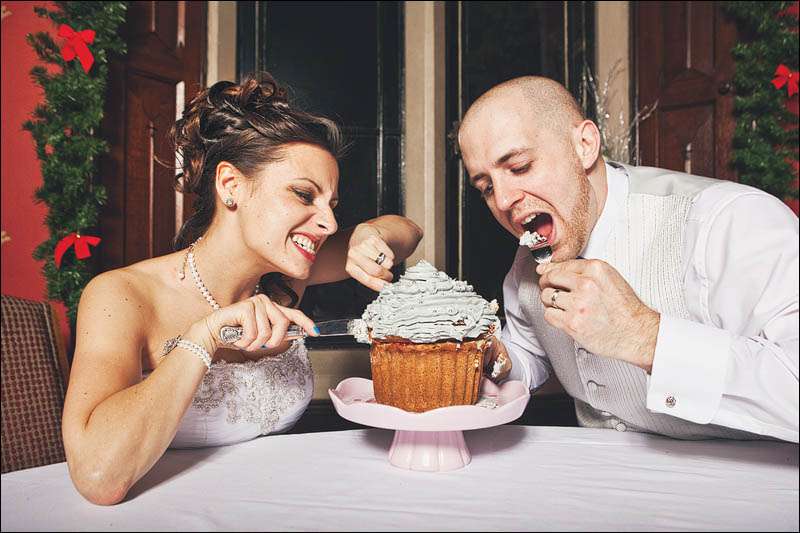 I just love them don’t you? And seriously…don’t get me started on the faux fur leopard coat…I totally ADORE this bridal look!

Damon & Tooty we're never going to have a wedding with a boring or standard theme. In fact as soon as they found their venue, Spring Grove House at the West Midlands Safari Park, the seed for a safari themed day was planted! "The theme came after viewing the venue", the bride began. "We saw a few places and found them booooooorrrrringg. We planned to go and see Spring Grove House but really didn't expect much from it as we had never heard of it. But when we got there we fell in love! They've kitted it out all in animal print décor including the carpets, the wallpaper and ornaments. The idea for the theme was obvious to me. I'm always wearing animal print attire and so we decided to insist our guests did the same for the wedding!"

Lynette and James' wedding was quintessentially 'them'. They were married with just the bride's brother, the groom's mum and their two children as guests. Their son wore a dragon onesie and their daughter fluffy ears and a tail. The bride wore leopard print leggings under her dress. After their short ceremony they all went to a local restaurant for lunch together.