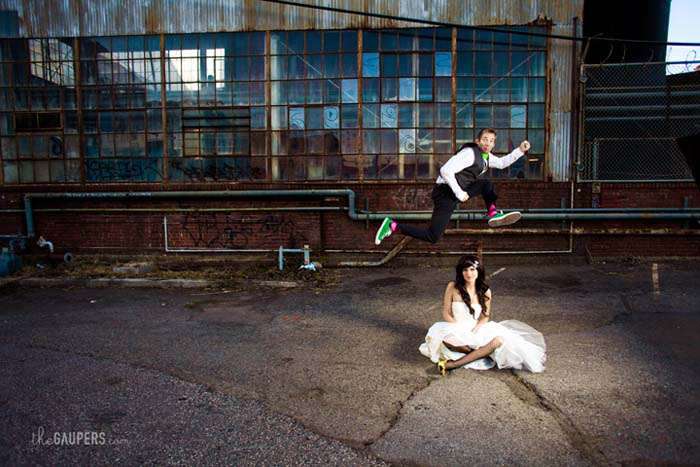 This ccccrazy couple had a pretty mad wedding followed by an equally (in fact maybe more so) insane trash the dress style shoot. Alongside their photographers, Steph & Ryan wanted to show that the assumptions that some couple’s have about trash the dress aren’t necessarily true and trash the dress shoots don’t literally have to mean your dress is completely destroyed. However by not be afraid of getting the dress a little bit dirty, you really can end up with some totally unique images. I wanted to share a selection from both the couple’s wedding and photo shoot as I know both sets of photos bring a huge smile to your face! I love these two! 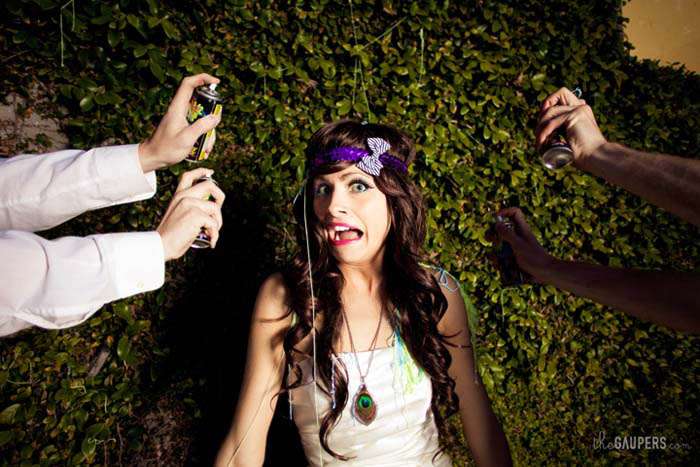 For their ‘dirt don’t hurt’ shoot the couple went all out will silly outfits, crazy wigs, silly string, creative make up and a whole lot of neon! There is no doubt in my mind that you are going to love these.

Be sure to watch the video after the ‘jump’ too!

Talking about their wedding, the couple explained “Our inspiration was basically to live up our day to the fullest by keeping a bit of our conservative background while adding in extra flare to show our personalities. We wanted to be creative but not so much to scare our Grandma’s away.”

“We knew that this wedding would be crazy considering our friends and family so we tried to incorporate their personalities into all of our choices for decoration/wardrobe. I think another thing to add is the chicken limo. Since it was meaningful to us (our first date) we wanted to have it pick us up at the church directly after the ceremony. Most of the attendees of the wedding knew about this part of our history, so it was a nice surprise and added quite a bit of uniqueness to our wedding.” 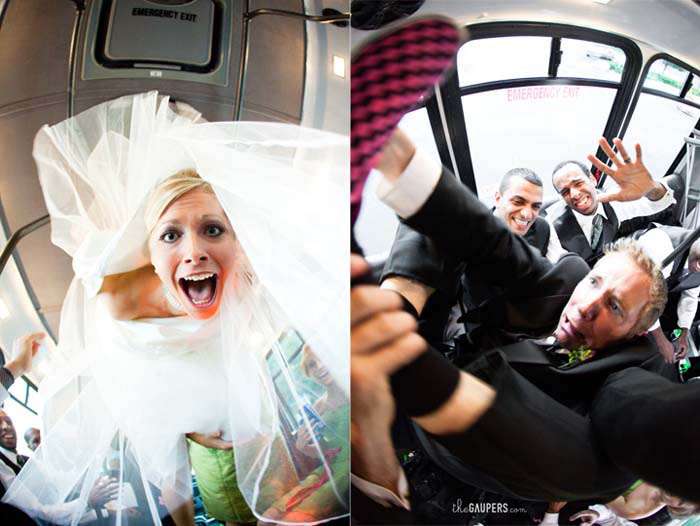 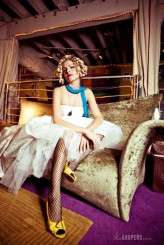 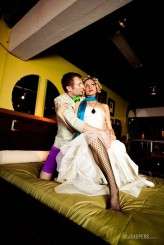 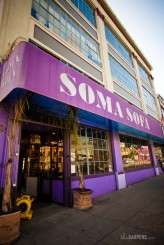 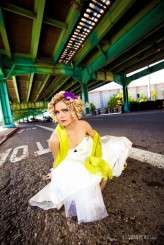 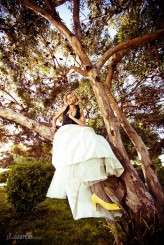 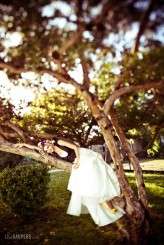 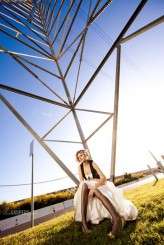 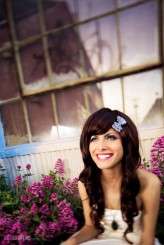 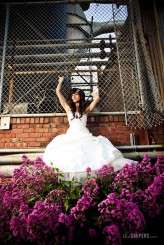 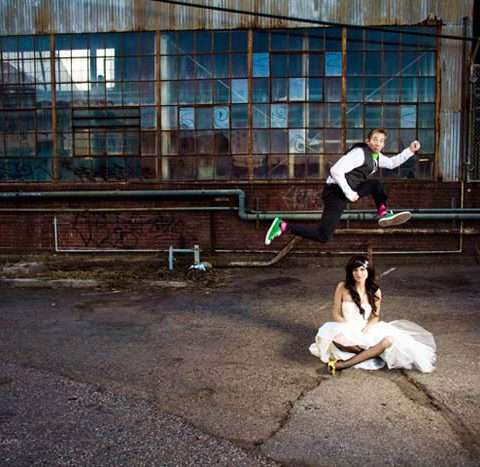 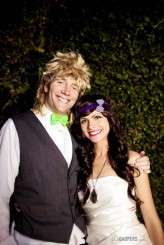 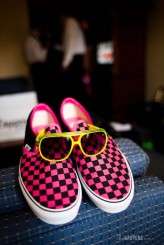 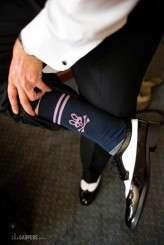 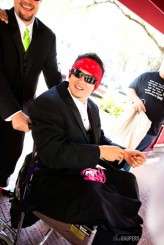 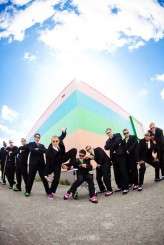 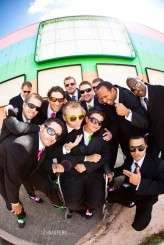 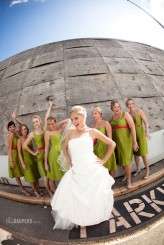 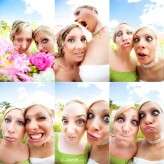 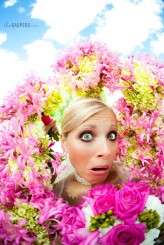 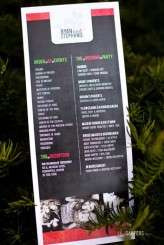 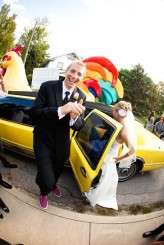 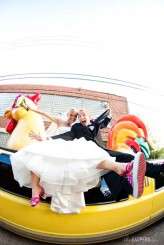 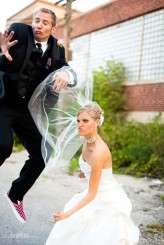 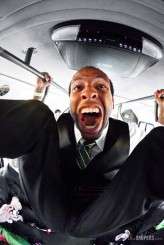 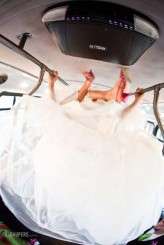 I'm not really sure if any other words could bring as much joy to me as 'gold', 'neon' and 'unicorn', which is why I pretty much leapt off my chair when I saw them decorating my inbox. Wedding photographer Kris Holland sure does know how to push my buttons! Leilani and Jeremy were married in July. Their ceremony was held outside, in Galena Creek, Reno to be exact, and their DIY reception was in Jeremy's grandparent's back garden.

Katie and Eric had one goal for their wedding: To be married. Even though they'd been taking about getting hitched for a while, they decided to elope in Vegas just ten days before!

Alysha and Cody's 'celestial neon' wedding was exactly that - a day made of dreams. Their glamorous ceremony, held in the coolest industrial warehouse space in Brooklyn, New York, was bedecked with sparkly, starry wonder and neon lights as dazzling as the couples themselves. It promised to be lit AF, and it totally delivered.

The main priority for Chris and Nat’s September wedding day was for them to host a really fun party that had little nods to all the things that they both love. They were also really keen to keep things local; part logistics for all their guests, and part because after many years of travelling around, they’ve finally put down roots in London so it seemed like an excellent idea to celebrate the city that they hold so dear.

Elegant Dive Bar Wedding Down Under

Both big music fans, Broden and Marnie met at a Jezabels gig in Brisbane. They bonded quickly, geeking out over their mutual music taste, and after exchanging thousands of messaged post-gig, they became a couple. They didn't officially get engaged in the traditional sense. They were apart for a few months (Marnie in London and Broden in Australia) and one night during a marathon five-hour Skype call they just kind of mutually decided that they should get married. Instead of an engagement ring for either of them, they got matching mallard duck tattoos on their chests.