Lee & Rose got married in Liverpool in a super duper stylish way. Rose’s outfit is literally off-the-hook! Have you ever seen a bride look so damn funky? Plus (and you’re going to love this) it is all from the British high street! Be sure to check out the full list of where each item was found after the photographic goodness. I am just mad about those tights…

“There was no real theme as such, but the sort of couple we are means that we wanted something relaxed, informal and fun” Lee , the groom, told me “We wanted a simple wedding, we wanted to wear the outfits we wanted, we wanted to pay for everything ourselves, and more importantly, we wanted our friends and family to come and have a good time, not feel like they had to behave in a manner they normally wouldn’t, i.e. no strict seating arrangements, not worrying about which knife to use to cut the bread roll, etc. We’re not show-offs, and we’re not millionaires, and we have our own sense of style, so we couldn’t see the point in all this so-called ‘traditional’ excess that means the marriage starts off with £30,000 worth of debt! It just wouldn’t be us.” 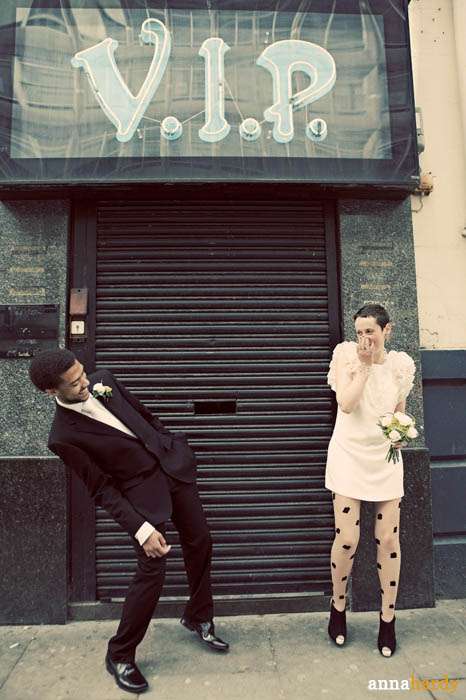 To save money the couple got married at Liverpool registry office and then had their reception in a pub, The Ship and Mitre. “Lee and Rose felt very strongly that they didn’t want to spend a lot of time and money on all the material paraphernalia and extras that people can focus on for their weddings. They’re madly in love and simply wanted to marry each other, with their friends and family around, in a way that enabled everyone to just relax and enjoy the day” photographer Anna explained.

Big sparkly Rock n Roll love and thanks to photographer Anna and Lee & Rose for sharing their day with us. 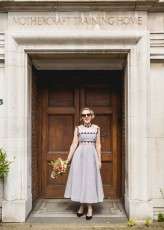 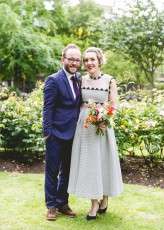 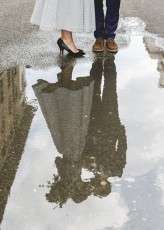 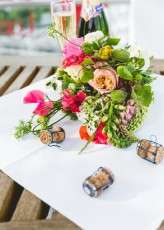 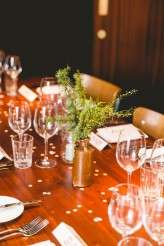 Laura and Jack's pub wedding was low key, laid back and colourful. They didn’t want to be restricted by one particular colour or style, we they included a bit of everything they like. "For inspiration I looked online and in magazines but mostly everything looked quite boring, until I found Rock n Roll Bride!" said Laura. "So I did take lots of inspiration from the website and magazine but mostly we just winged it and picked things we liked."