I am so excited about this wedding. Not only because it’s photographed by one of my favourite photographers, Ben Blood; not only because the couple, Diane & Adam are super cool, lovely and stylish; but because even though the couple are both American and the wedding took place at Lairmont Manor in Bellingham, WA, they expressed their love of all things British with a fabulous English themed wedding. 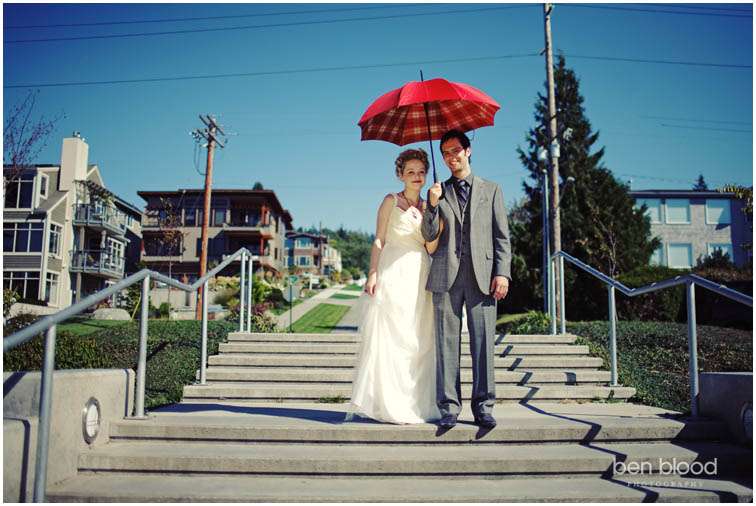 Diana told me all about their retro, funky, British punk rock day:
My dress was from Les Habitudes on Robertson Boulevard in L.A.They specialize in getting a lot of their dresses from European designers that they bring in under their label, so most of their dresses are one of a kind. My shoes were Alexander McQueen and the hair comb I wore was a Victorian antique. The necklaces are by Pyrrha, in Vancouver B.C. Their bronze pendants are made from 19th century wax seal molds. The ones I chose say “My life is a prayer,” “While I breathe I hope”, and” Love conquers all.” The blue seal ring on my finger was one I had from Anthropologie. The jacket I wore to leave the wedding is from All Saints in the UK. My bridesmaids are wearing runway dresses from BCBG. Our hair was all done by Shawn Wright, the owner of Ryan Chanel Hair in Anacortes WA. She researched runway shows of Vivienne Westwood and Alexander McQueen for days before and we also channeled a bit of Helena Bonham-Carter’s impeccable style.

My husband Adam wore a custom grey suit we had made at Nordstrom and grey patent leather Italian loafers. His groomsmen were all wearing tweed vests and hats from J. Crew with “The Who” edition converse all stars because Adam had always wanted Chucks in his wedding. We were expecting rain, so we had Burberry umbrellas and galoshes standing by.

All our music was all British. I walked down to the theme song from “Love Actually,” we danced out to Queen’s “Don’t Stop me Now,” and Adam sang Coldplay’s “Fix You” in the ceremony. Our band for the reception was Garage Voice from Seattle.

We went with our overt Anglophile theme because I’m in love with London and theatre, so Adam flew me there for a weekend in March and proposed in front of Big Ben. We went back in June and collected tube station signs in Notting Hill for the tables, as well as teacups and pots from all over the world. Most of the hanging flags were from WWII. We’re planning on moving to London someday soon.

Thanks to Ben for sharing his images and to Diana & Adam for all the great info. I look forward to meeting you when you do move to London! 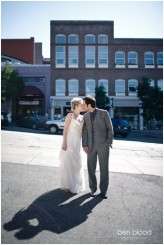 Retro board games on the tables, a laid back pub location, a gorgeous heirloom vintage dress & yellow Vivienne Westwood shoes. What's not to love about Mike & Geraldine's Manchester wedding? Answer: Nothing. The wedding was held at Manchester town hall and Odder Bar. The couple picked the pub location for it's quirky decor, laid back vibe and the ability to do anything they wanted with the space. "I am one of those kind of girls that most people, especially organised list-making people, want to give a good shake to," Geraldine began with a giggle. "So just to bug people more I went and fell madly in love with Mr Practically Horizontal himself... Not being a planner means I jump out of bed, sling a few things together and then give people a mystified kind of look of gratitude when they compliment the finished look… And this is exactly what happened with our wedding as well."

When you set your wedding around a vintage carousel it's pretty much guaranteed to be a fun-filled and awesome day right? That's exactly what Lucy & Mini had when they found Preston Court in Kent, and even the rain couldn't stop them having the time of their lives! "Lucy & Mini chose an outdoor wedding and were married under a pretty little gazebo on Juliana's Island which their guests sat across a little stream to watch," wedding photographer Jennifer West told me. "All was well until there was a huge downpour which soaked all the guests. Luckily everyone saw the funny side. Lucy & Mini walked down the aisle (well, the path) as husband and wife to 'Lucy in the sky with diamonds'. The torrential rain lasted most of the day until the end when the sun came out and lots of fun photos were taken on the carousel while the sun was setting."

With a surname like Wildblood, Dean and Jen's wedding was never going to be boring. In fact they wanted their wedding to be just like them - quirky, stylish, fun and with a hint of vintage. Jen wore a Vivienne Westwood wedding dress and jewellery, and Dean looked dashing in his Reiss suit, Thomas Pink tie and Kurt Geiger shoes.