From the photographer, Maureen Ford
These Brooklyn  Brides have been together for over 7 years and came to Boston, MA to get married because it is not yet legal in their home state. I photographed them the day before their wedding while they  applied for their marriage license at Boston City Hall and also their actual wedding day. They wanted a small, intimate ceremony with only immediate family, but one of the bride’s mother’s wanted to surprise them with a real wedding party and invited over 30 friends from across the country to come and celebrate. The girls were super surprised when all their “guests” were revealed behind a curtain, champagne was popped and heartfelt speeches were given.  They were then married in a beautiful candlelit  room over looking the city and each one had walked down the aisle with their dad while John Lennon’s Imagine softly played in the background.  A cocktail/dinner party followed with more champagne, speeches and celebrating! 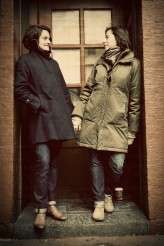 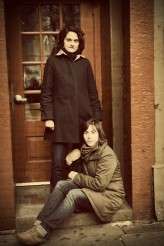 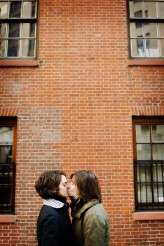 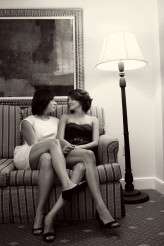 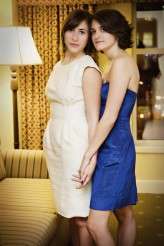 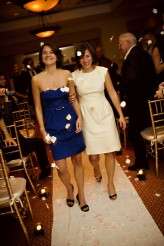 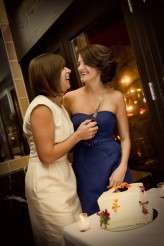 Aly & Elroi's wedding was described by the couple as 'one of the most magical days of our lives' A day filled with such a fun party vibe and one where all their friends and family pulled together to help them achieve the wedding of their dreams. Just a few examples of their amazing friends who helped out include, both their outfit's being made by a friend of theirs who lives in New York and another friend made and travelled with their wedding cake all the way from Texas! They had another friend cater for them and some other friends who made the invitations. Funny and persoanal anecdotes are what makes wedding like this great, and Aly spoke about their impromptu (and hilarious) bridal shower... So, I went to the coffee shop to meet them, got my coffee, sat down and realized that everyone was being weirdly quiet as I babbled and babbled. So, I stopped and was like, "What's going on? Why aren't y'all so quiet?" And my friend Lindsey says, "Well, I'm just going to tell you. You're kidnapped." "Huh?" Danielle, my MOH, shouts "Get in the car. I'm not gonna tell you twice!" (She was trying to be tough-sounding in a hilarious way.) So I was handed a clue that I had to decipher to tell them where we were going to. I was like, "Wait- you're kidnapping me but I have to tell you where to take me?" Danielle: "Don't ask questions!" Ha! So I figured out that the place the clue was talking about was the place Elroi proposed. So we went there and took pictures that would be left as a clue for Elroi, who has also unknowingly been kidnapped from our house by his side of the wedding party. (Side note: Elroi was actually kidnapped right in the middle of washing our dogs. So, Danielle's boyfriend who had been helping at the house took over dog-washing duties. As El's friends were leaving with him, Macauley, our rascally cake-maker instructed Danielle's boyfriend to just "wash as many dogs as you can." Every time I solved a clue, I got a present--so it was also like a surprise shower. I couldn't believe I didn't know anything about it and I felt so loved that all these people would plan something so elaborate and fun for us. Thanks to Aly & Elroi for sharing their gorgeous wedding and story! Credit: Our Labor Of Love

Sadie and Marie were married at Calke Abbey Riding School, a National Trust venue in Derbyshire. They were the first same sex couple to marry here and they fell in love with it's less than perfect appearance. It was the ideal setting for their alternative wedding.

Alison and Jeremy's wedding took place in Melbourne, They had a non-denominational ceremony in a church and their reception was held at Shebeen, a super cool bar on Manchester Lane. Their day was super colourful and nearly all the décor was DIYed by the couple themselves. "We didn't really have a conscious theme," explained the bride. "We just put together a wedding that represented us. Throughout the planning process we questioned a lot of the usual traditions and culled elements of a traditional wedding that didn't have meaning for us."