OK I am officially blown away by this couple and this wedding. It bright and it’s fun and it looks like a wedding I would have loved to be at!

Nicola & Ben got hitched at Tithe Barn, Hampshire and did as much DIY as was feasible.  This included all the invites, the favours, the decorations (yes, Martha Pom Poms… all 450 of them!), the table plan, the order of the day booklets…

Nicola says
It was well worth the extra effort when we saw all our hard work come together on the day
and I have to agree – the result is quite frankly spectacular, gorgeous and inspiring,. Plus I am sooo jealous of Nicola’s amazing Candy Anthony dress & petticoat (and her veil which she made herself for the grand total of £1.50!)

The couple also had a cine film wedding video that I can’t wait to see (and share with you of course) when they get it back.

Clicky here for their slideshow 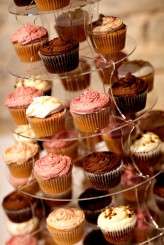