I was going to wait until I had been sent more of the results, but I’m so excited about how these have turned out that I have to post them right away!

Yesterday afternoon, myself and David got in my rickety little ford ka and traipsed down to Bognor Regis (nice name huh?) to get some new shots to use on the site and for some up and coming (and very exciting) Rock ‘n Roll Bride promotion (more info on this to come very soon!)  It took us about 2 hours to get there and I’d been up since 4.30 am for my ‘day job’. YAAAWN!

We got there at about 3.30pm and found a hotel that allowed me to get changed in their toilet and doll myself up.  It was rather hilarious trying to get me into the dress again – I didn’t have a lacing lesson a needless to say David was as clueless as me, I did get stuck a few times!  I have to say, this shoot really made me love my dress again, I’d almost forgotten how bloody gorgeous it is.  We headed out to the pier, a rough a ready looking wall and the sea front for a variety of shots and styles.  I was bloooooody freeeeezing by the end but I think you’ll agree it was all worth it!  I am SO happy with the results, aren’t they fantastic!?  We were so lucky with the light – it really made the photographs.

My fabulous shoes were personalised by the amazing Shoe Missy.  I actually only ordered them on Wednesday thinking I wouldn’t get them on time for the shoot, but I figured I could use them another time.  However when Anna, the shoe designer heard about the shoot she rushed the order through and was able to get them shipped to me in time to use.  They arrived only half an hour before we had to leave, lucky huh!?  We were SO happy we could use the shoes – they really became a feature of the photographs.

Anyway, enough of my ramblings, I’m sure you’re dying to see them right?  Well here they are…weep at the fabulousness! 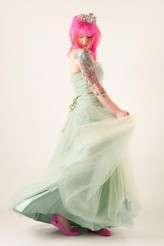 ‘Rock n Rainbow’: An After the Rainbow Inspiration Shoot at The Photography Farm (+ Behind the Scenes Video)

I'm a huge Wizard of Oz nerd, so when wedding photographer extraordinaire Lisa Devlin asked if I fancied attending her first Photography Farm workshop to model in an 'After the Rainbow' themed styled shoot...well my biggest concern was whether I'd actually get to wear some ruby slippers...and you know what? I did!

So about 6 months ago I received an email from Wedding Ideas Magazine saying our wedding had been submitted to them as a Real Wedding feature by our photographers English Rose and would we be happy for them to share them. Being the huge poser that I am, of course I said yes. So I picked up a copy of the magazine today and although some of the photographs they chose I don't really like (I think my face looks huge in the pain photograph for example!) and the article is beyond a cheese-fest, it is a little bit exciting to be in print...and can you believe they even called me a Rock Chick...maybe they knew...

About a week ago, I got an email from my friend Amma telling me about a new book she'd just heard about. London Tattoo, was being put together by photographer Alex Macnaughton with the aim to photograph and document the stories of a diverse collection of tattooed people in London. I figured I had nothing to loose and so quickly filled in the application form. "I'm not the most tattooed girl out there," I thought, "but it's always worth giving these things a go."