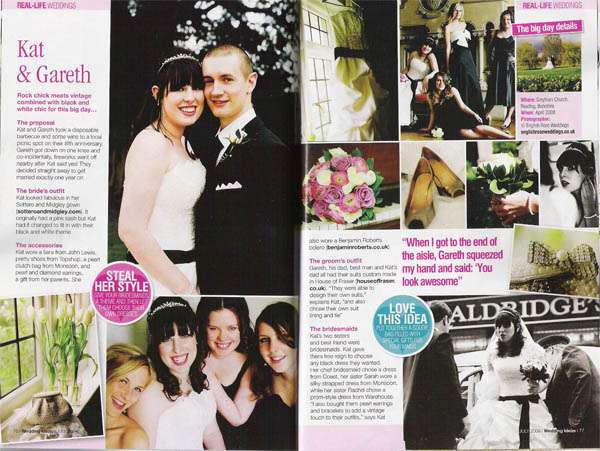 So about 6 months ago I received an email from Wedding Ideas Magazine saying our wedding had been submitted to them as a Real Wedding feature by our photographers English Rose and would we be happy for them to share them. Being the huge poser that I am, of course I said yes. So I picked up a copy of the magazine today and although some of the photographs they chose I don’t really like (I think my face looks huge in the main photograph for example!) and the article is beyond a cheese-fest, it is a little bit exciting to be in print…and can you believe they even called me  a Rock Chick…maybe they knew…

Just in case you can’t read the text, it reads as follows:
Kat & Gareth
Rock chick meets vintage combined with black and white chic for this big day…

The proposal
Kat and Gareth took a disposable barbecue and some wine to a local picnic spot on their fifth year anniversary. Gareth got down on one knee and co-insidentally fireworks went off nearby after Kat said yes! They decided straight away to get married exactly one year on.
The bride’s outfit
Kat looked fabulous in her Sottero and Midgley gown (www.sotteroandmidgley.co.uk) It originally had a pink sash but Kat had it changed to a black one to fit in with their black and white theme.
The accessories
Kat wore a tiara from John Lewis, pretty shoes from Topshop, a pearl bag from Monsoon (which I actually found a lot cheaper on ebay -they left that bit out though) , and pearl and diamond earrings,a gift from her parents. She also wore a Benjamin Roberts bolero (www.benjaminroberts.co.uk)
Steal her Style – Give your bridesmaids a theme and then let them choose their own dresses.
The groom’s outfit
Gareth, his dad, his best man and Kat’s dad had all their suits custom made at House of Fraser (www.houseoffraser.co.uk) “They were able to design their own suits” explains Kat, “and also chose their own lining and tie.”
Love this idea – Put together a goodie bag filled with special gifts for your maids.
The bridesmaids
Kat’s two sisters and best friend were bridesmaids. Kat gave them free reign to choose any black dress they wanted. Her Chief bridesmaid chose a dress from Coast, her sister Sarah wore a silky, strapped dress from Monsoon, while her sister Rachel chose a prom-style dress from Warehouse. “I also bought them pearl earrings and bracelets to add a vintage touch to their outfits” says Kat.
When I got the the end of the aisle, Gareth squeezed my hand and said “You look awesome”
The Flowers
Kat’s pretty bouquet was created by Cherubs Floral Design (www.cherubsfloraldesign.com) The ceremony flowers were supplied by the Church.
Love this idea – Write a poem to each other and have it printed in your order of service
The Ceremony
“My parents live next door to the vicar so it meant a lot to us to have him marry us” says Kat. Gareth’s grandad and a friend of Kat’s did readings, and some friends played in a band at the service, giving rock renditions of the hymns and Elton John’s Tiny Dancer.
The reception
Held at The Elvetham (www.elvethamhotel.co.uk) the guests had a delicious, three-course meal. “We head a band in the evening but no extra guests. Instead, we had a party in my parents’ garden two weeks later and I got to wear my dress again!” explains Kat.
Our table names were our favourite movie couples – we called the top table Romeo and Juliet…
The details
Instead of favours, Kat and Gareth put together an ice-breaker quiz about themselves. They even put together a goody bag for the winning table.
Groom’s tip – have your own opinion and don’t let your bride tell you what you want.
Most memorable moment
“I threw my bouquet with such vigor that it bounced off the back wall, hit someone on the head and landed in Carly’s (Chief bridesmaid) arms – everybody said it was a fix!” laughs Kat.
The honeymoon
The couple jetted off to Tokyo the next day and stayed in a traditional ryokan (a roll mat on the floor) “Very Rock n Roll” says Kat.
Bride’s beauty tip – “I went on  MAC and Bobbie Brown binge before the big day. I decided to do my make up myself because I know exactly how I like it and I didn’t want to feel overdone or not like myself. Make sure you have concealer and your lippie with you for touch ups on the day.” 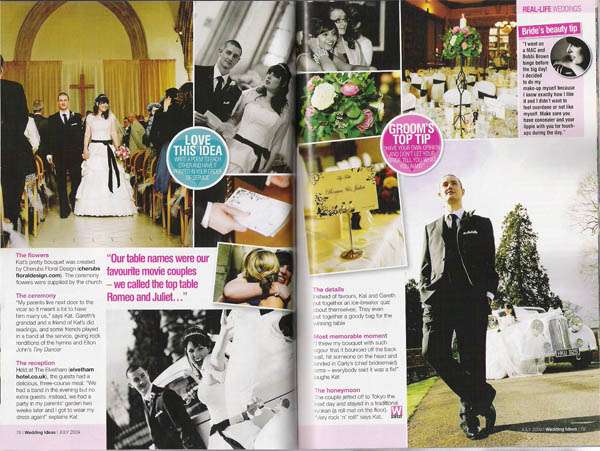 The time has come..I'm going to start the huge job of attempting to rebuild the old blog. The posts will no doubt be briefer than before, as not only has the tempo and direction of Rock n Roll Bride moved on since these old posts but also it's going to take hella long time - just the best of the best will make the new and improved Rock n Roll Bride! Let's start with the stuff surrounding our own wedding, back in April 2008 - shall I re-do the wedding report I wrote? If you want it I can re-post it as I managed to recover a lot of the text on the old blog. But right now I'll just begin with some of our favourite photographs from the day taken by our fabulous wedding photographers English Rose Weddings.