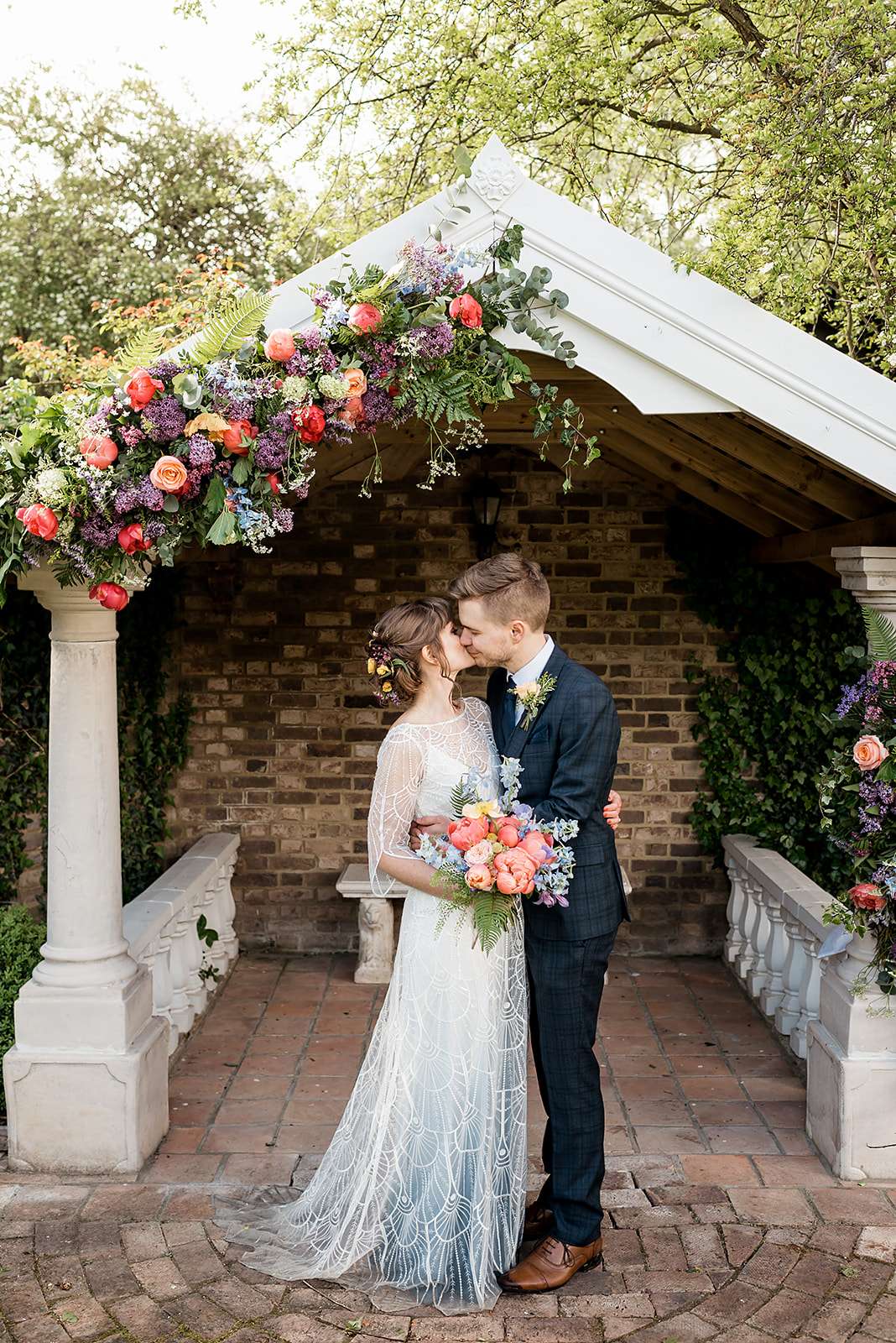 Do you ever look at a wedding online and think “Ah man, I would have loved to have been at that wedding!?” I do this all the time and Amy and Dave’s day looks like it was a total HOOT! From a freak pre-ceremony rain storm, to real life fun fair amusements to all their guests, their main goal was to enjoy the day as much as physically possible. And oh boy, did they!?

Married at Marleybrook House in Canterbury, Amy and Dave’s main objective was simple: “Fun! Fun! Fun!” said the bride. “We wanted to organise something that felt like us. Neither of us are religious so we knew we wouldn’t want a church or anything, and a big stately home or country hotel just didn’t feel right. I was also conscious that sometimes weddings can feel a bit stale and formulaic so we wanted to avoid doing anything traditional for the sake of it. When looking for a venue I was trying to find something with a fun edge, and well, it doesn’t get much more ‘fun’ than a vintage fun fair and dodgems right?!” 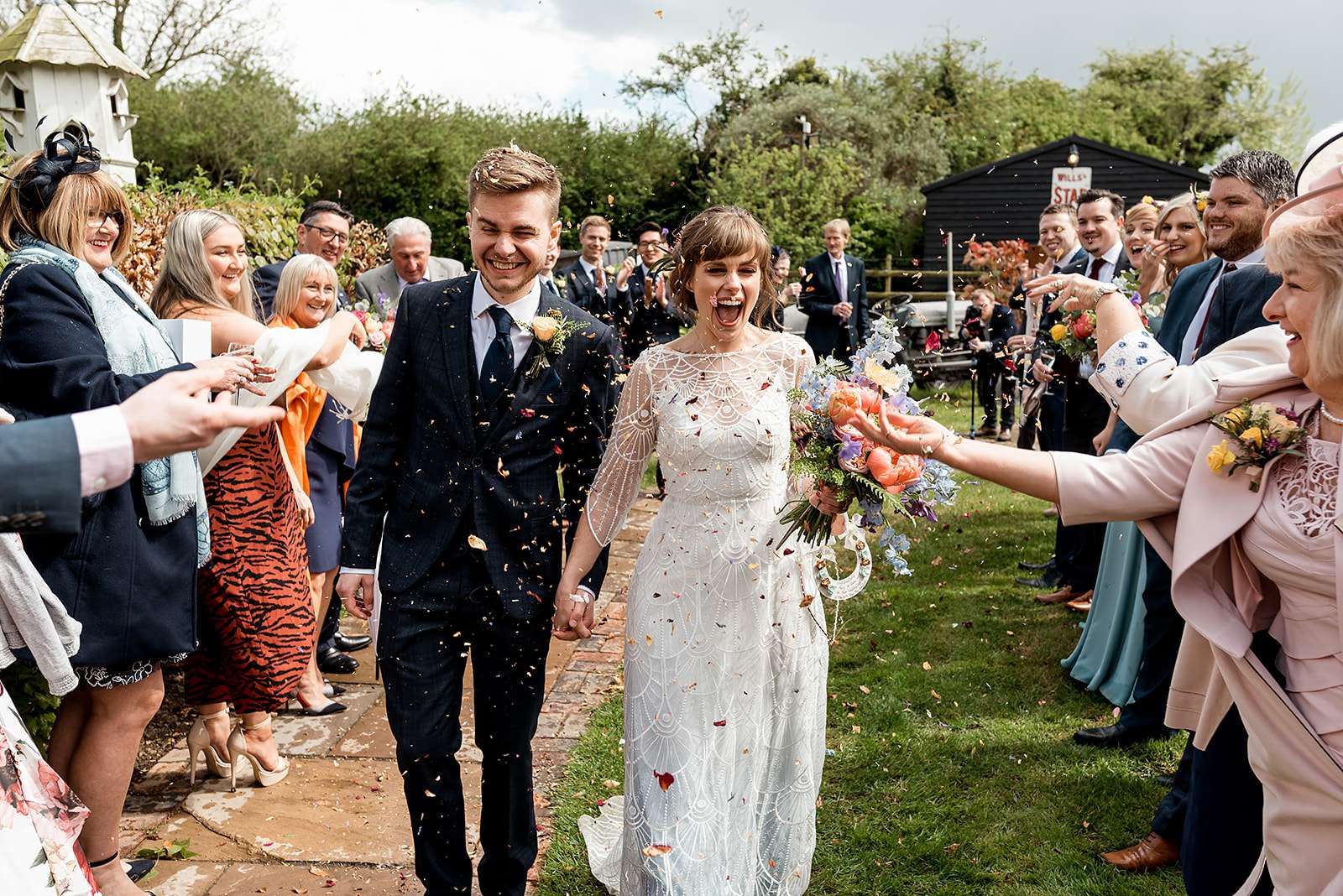 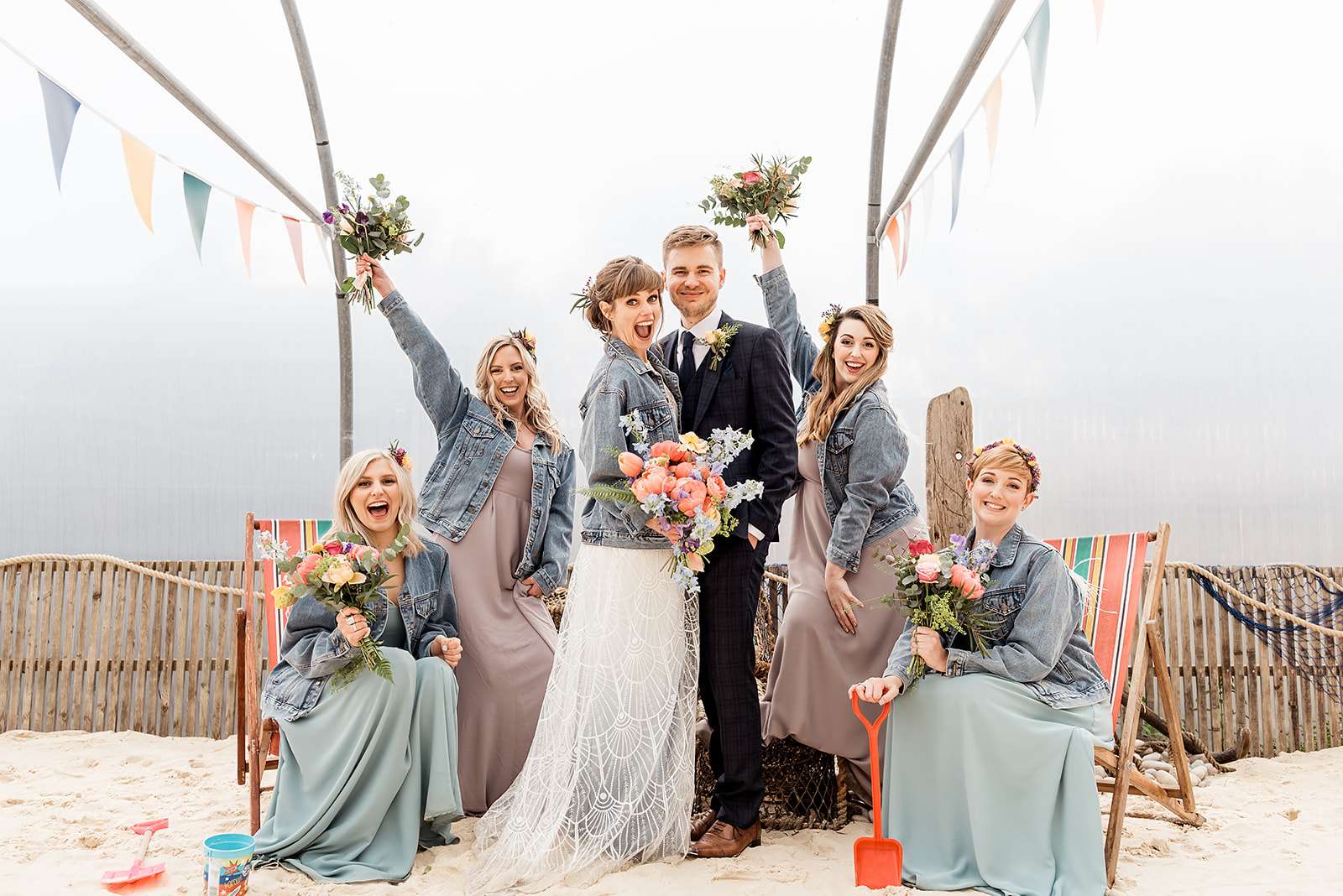 Despite the rain, they still managed to have their dream of an outdoor ceremony, under the pagoda in the grounds of their venue. “We’d planned to hold our ceremony in the outdoor walled garden as it is absolutely gorgeous”, Amy explained. “Our florist had also built a fab floral asymmetric arch on the gazebo so I was desperate to make sure we could actually get married outside. On the day, first thing in the morning was glorious sunshine! The girls and me were so excited. Then it turned. We were getting ready in the onsite studio just behind the walled garden and could hear the crazy hailstorms coming down on the roof. The staff kept coming in to update us, absolutely soaked through. We ended up delaying a little as it was so on and off. I hadn’t realised, but Dave and the venue staff had all of our guests out with umbrellas and rolls of blue paper towel wiping ice and rain off of the seats minutes before the ceremony. Just as we thought we’d have to give in and move inside, they came to get us and said – we have to go NOW. So we abandoned our freshly poured glasses of champagne and went for it.” 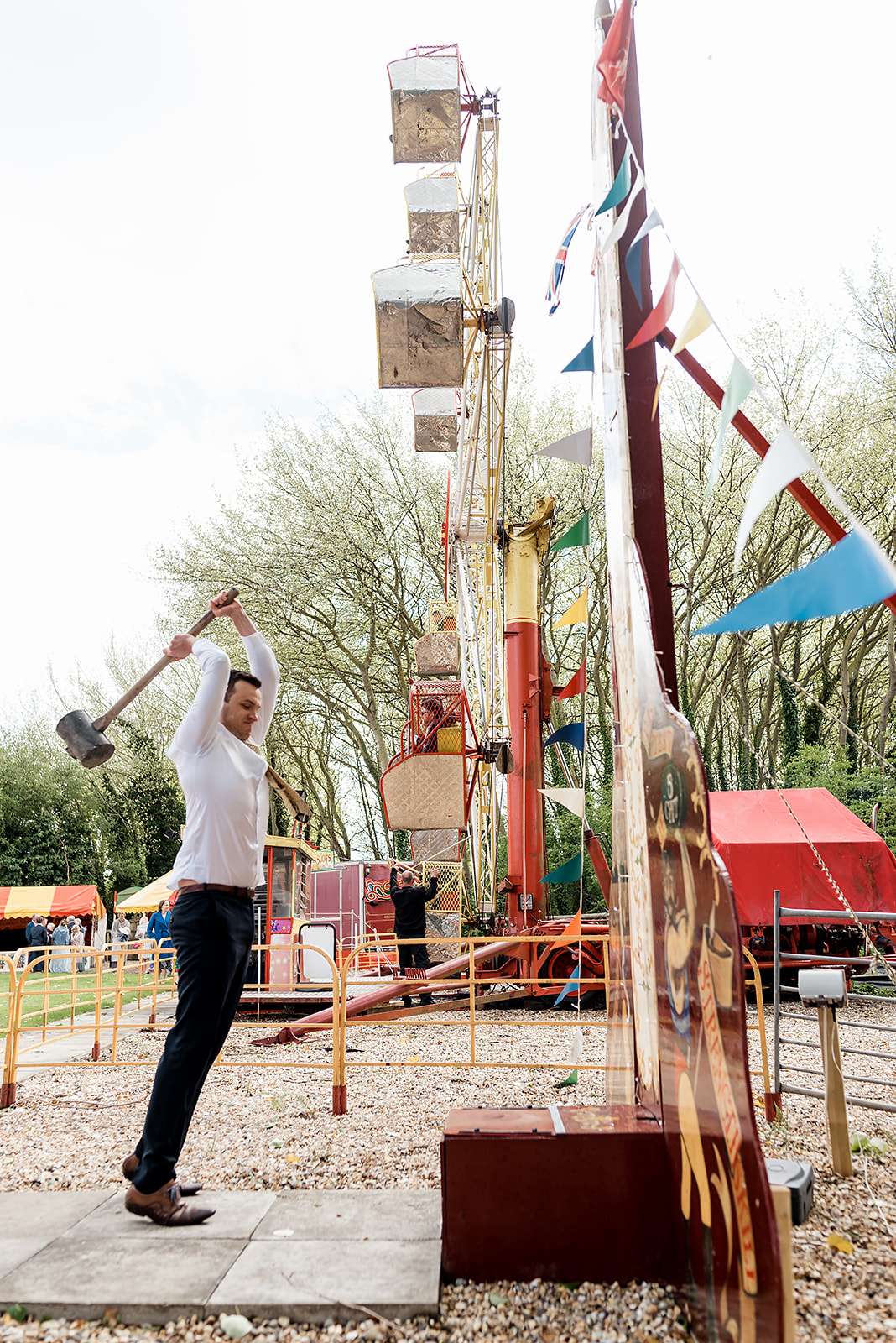 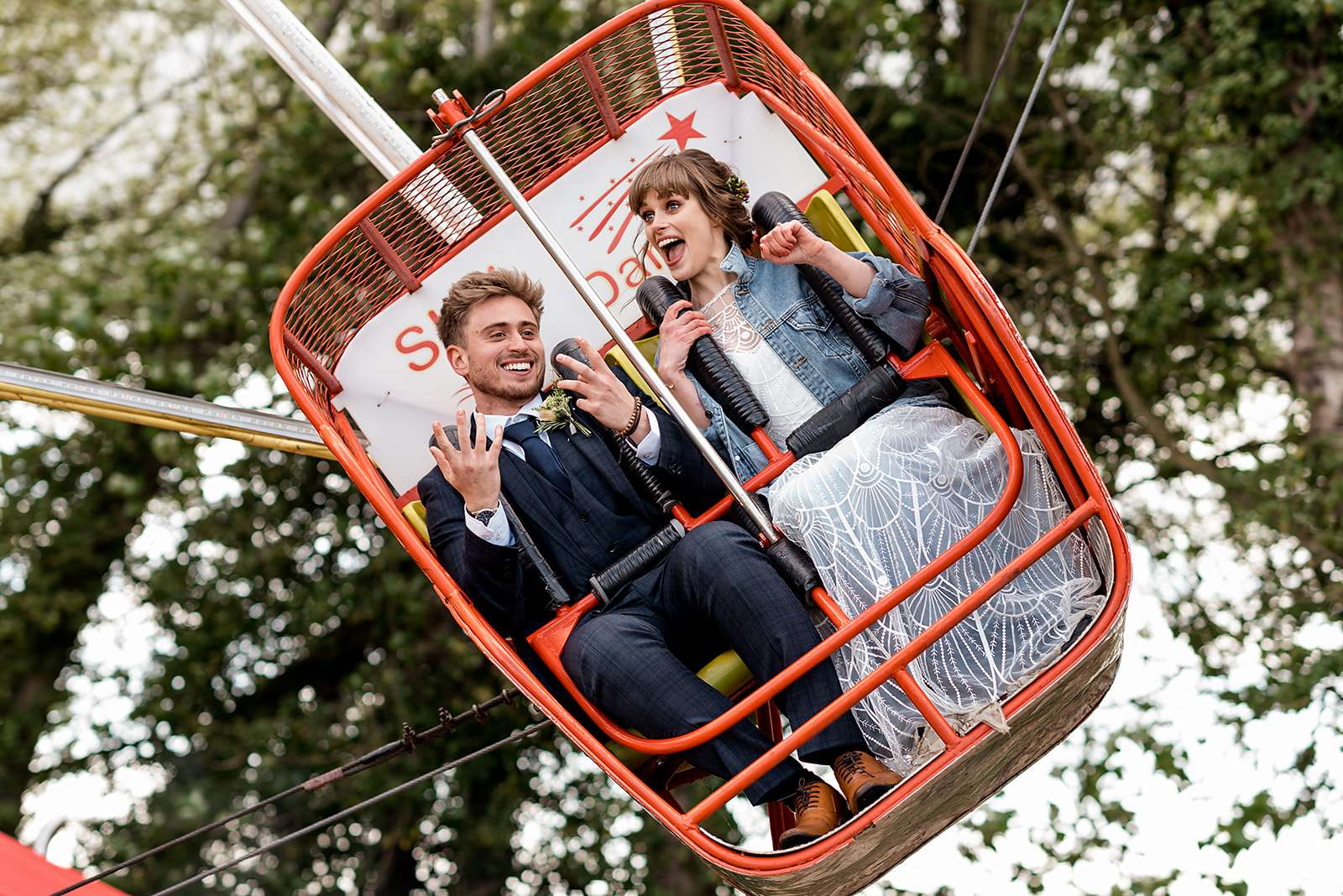 “My cousin (and bridesmaid)’s dress strap also bust minutes before we were due to walk out, luckily our make-up artist had needle and thread and was able to do a last minute repair!
As my dad and I were about to go, my grandad appeared behind us saying my Nan had had a fall so he was looking after her! Chaos. The venue assured me she was being looked after, so we had to go.”

“We walked down the aisle to the acoustic version of I Will Try by Deaf Havana.
My best friends did two readings for us, the lyrics to Truth by my favourite band Bloc Party, and then a collection of quotes from Winnie the Pooh and we had both of our mums as our witnesses. Despite the chaos, it was perfect. I couldn’t believe how happy I was. And the sun even shined the whole way through! Although the rain started again as we were signing the register.” 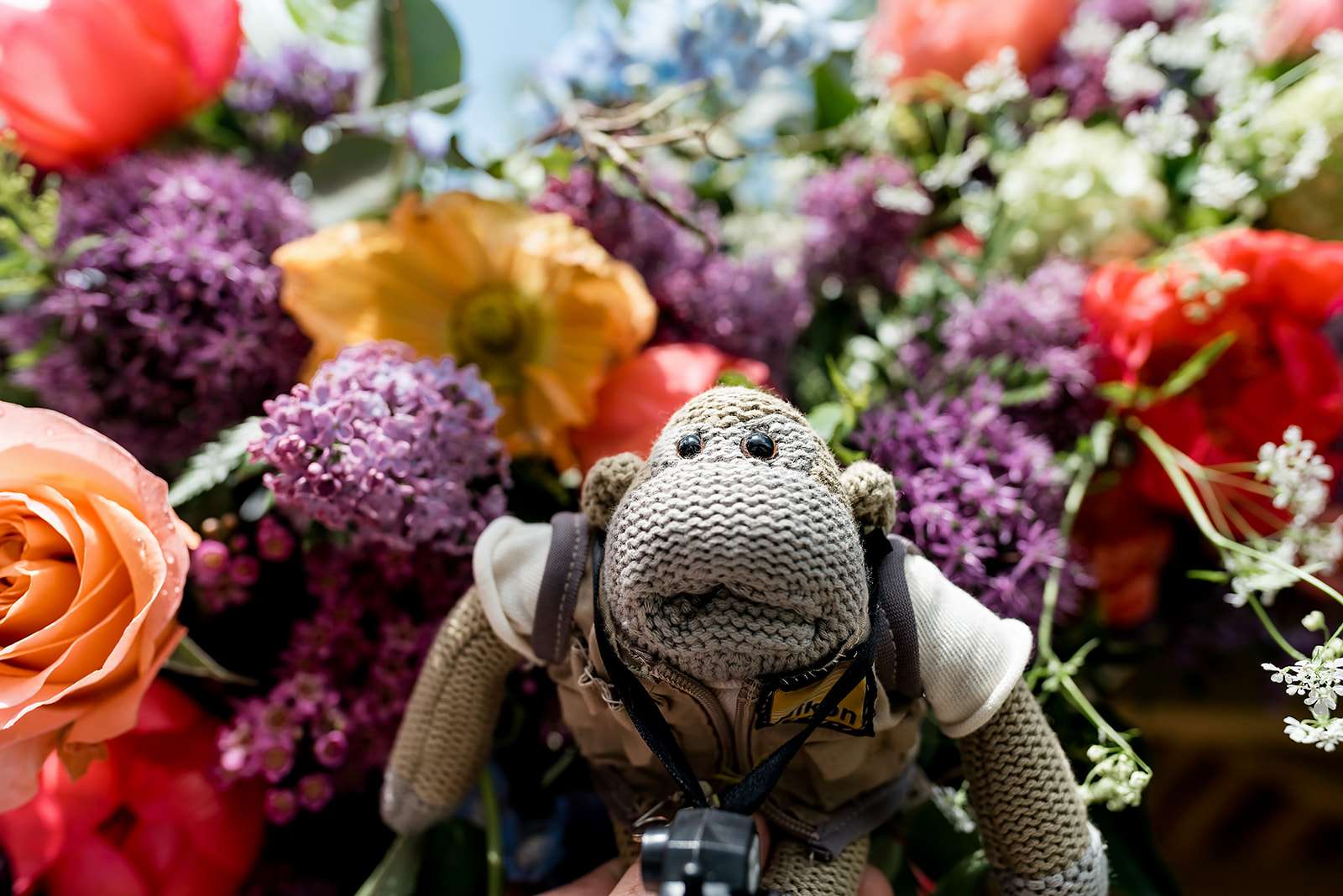 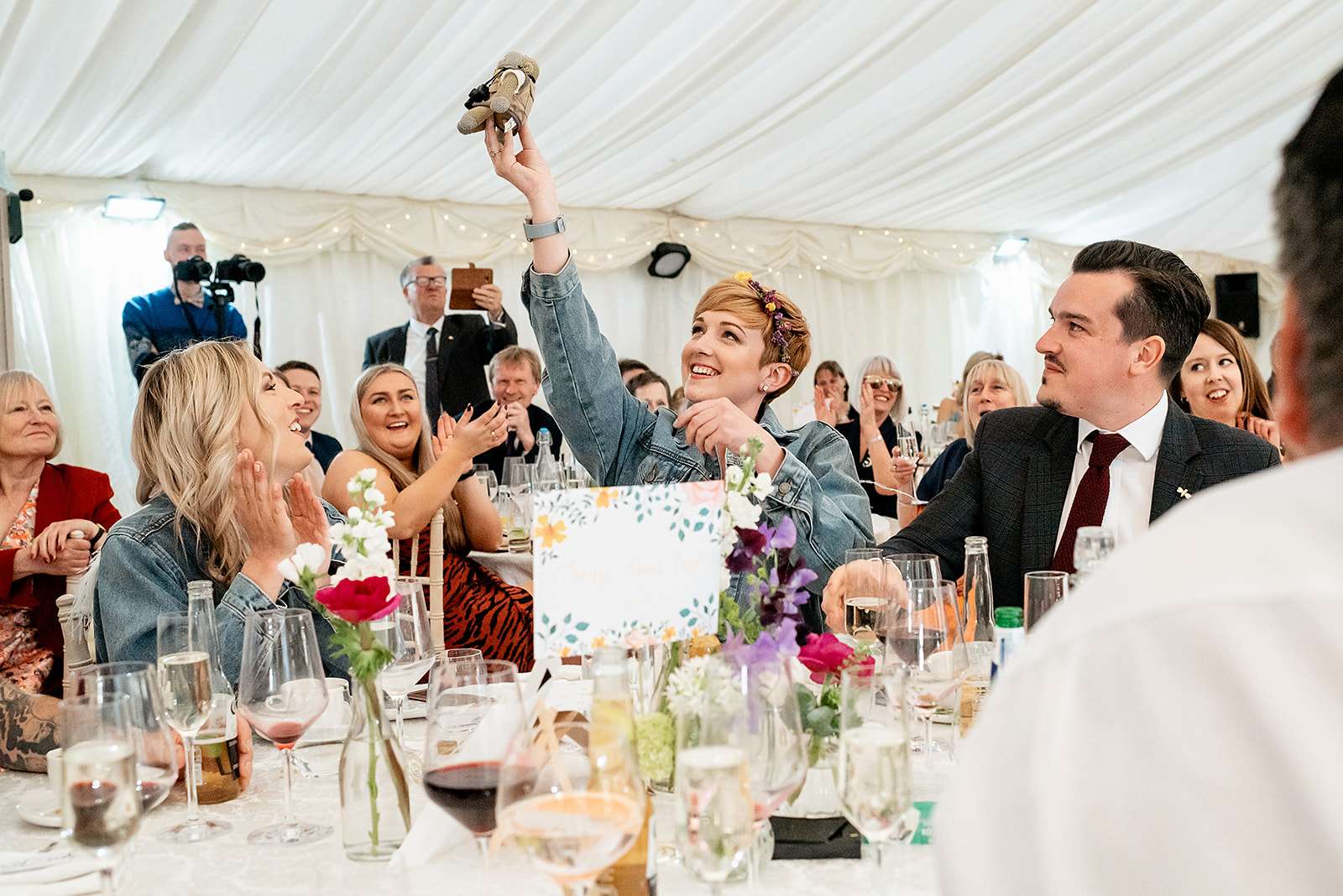 If you look closely at the photos, you may spot an unexpected guest – the PG Tips monkey! Of course there’s a story behind that, as Amy explains, “My dad is not used to public speaking at all, so I always said to him he didn’t have to do a father of the bride speech if he didn’t want to. When he told me he’d written it I was initially surprised, and always expected it to be very short and mainly just to cover off the traditional niceties.”

“When he started speaking it absolutely blew me away! He started with a couple of funny anecdotes / advice to Dave about marriage, and then he said ‘So this is usually the part when I would tell a sentimental story about Amy, but I’m going to do something different. Amy, I have a question for you. Did you know you have an uninvited guest today?’ I was confused, and then he continued. ‘When Amy was younger and we went on family holidays we had something she loved doing, and that was hiding her little friend! Amy loved hiding him in the flowers, or high up in the gazebo where couples were getting married on the beach, so when they looked at their photos later, they would probably notice him somewhere in the background! Well Amy, when you and Dave look back at your photos, see if you can spot him!’ He then turned to my cousin sitting opposite me, and she held him up! I couldn’t believe it, so clever, personal and hilarious!” 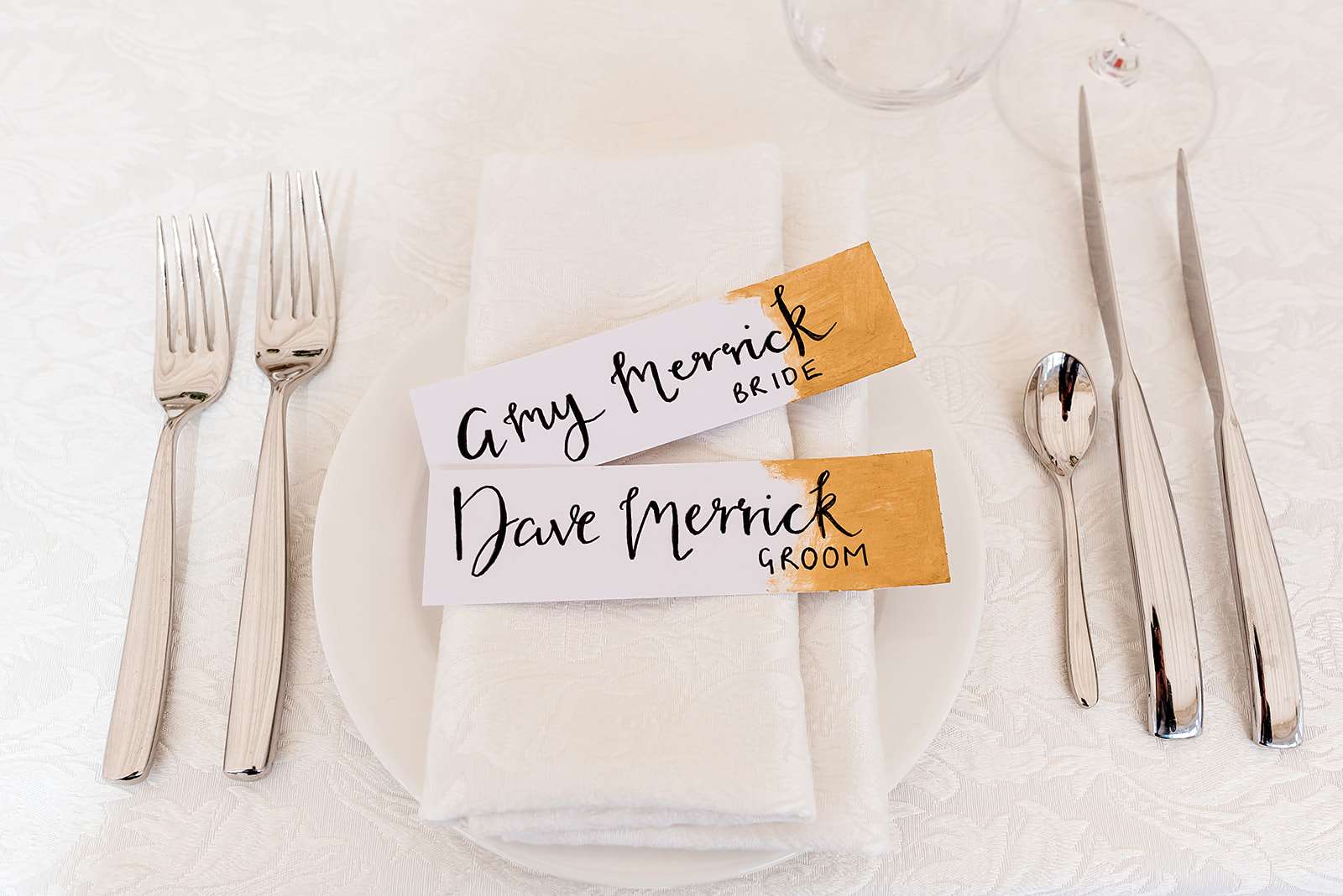 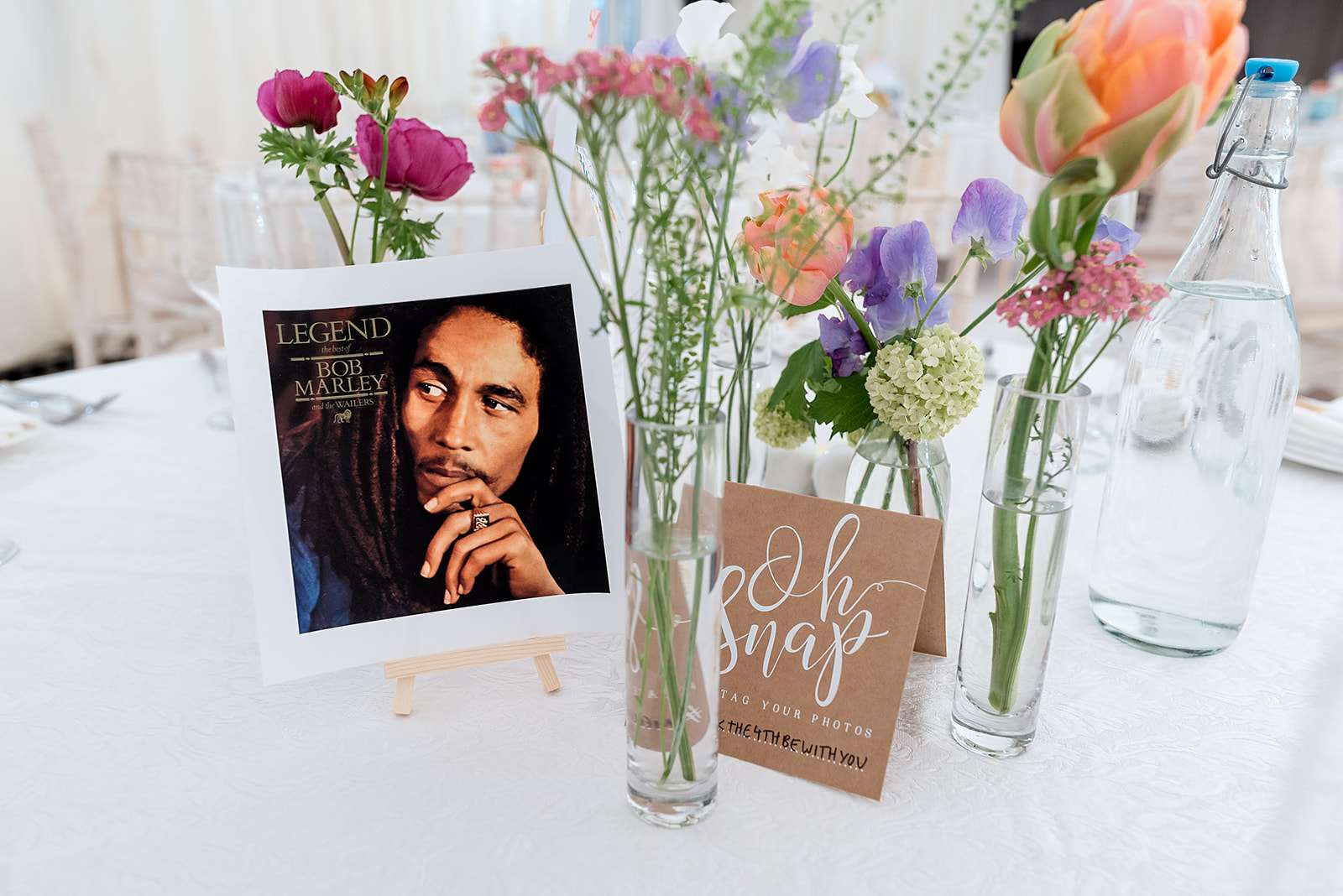 The couple rounded of the night by both performing on stage for their guests. “Dave and his ushers played a short set in between our hired band, which was awesome! Dave’s dad is a sound and lighting engineer so he had a lot of fun helping us set this up with a full laser show complete with smoke and haze machines.” 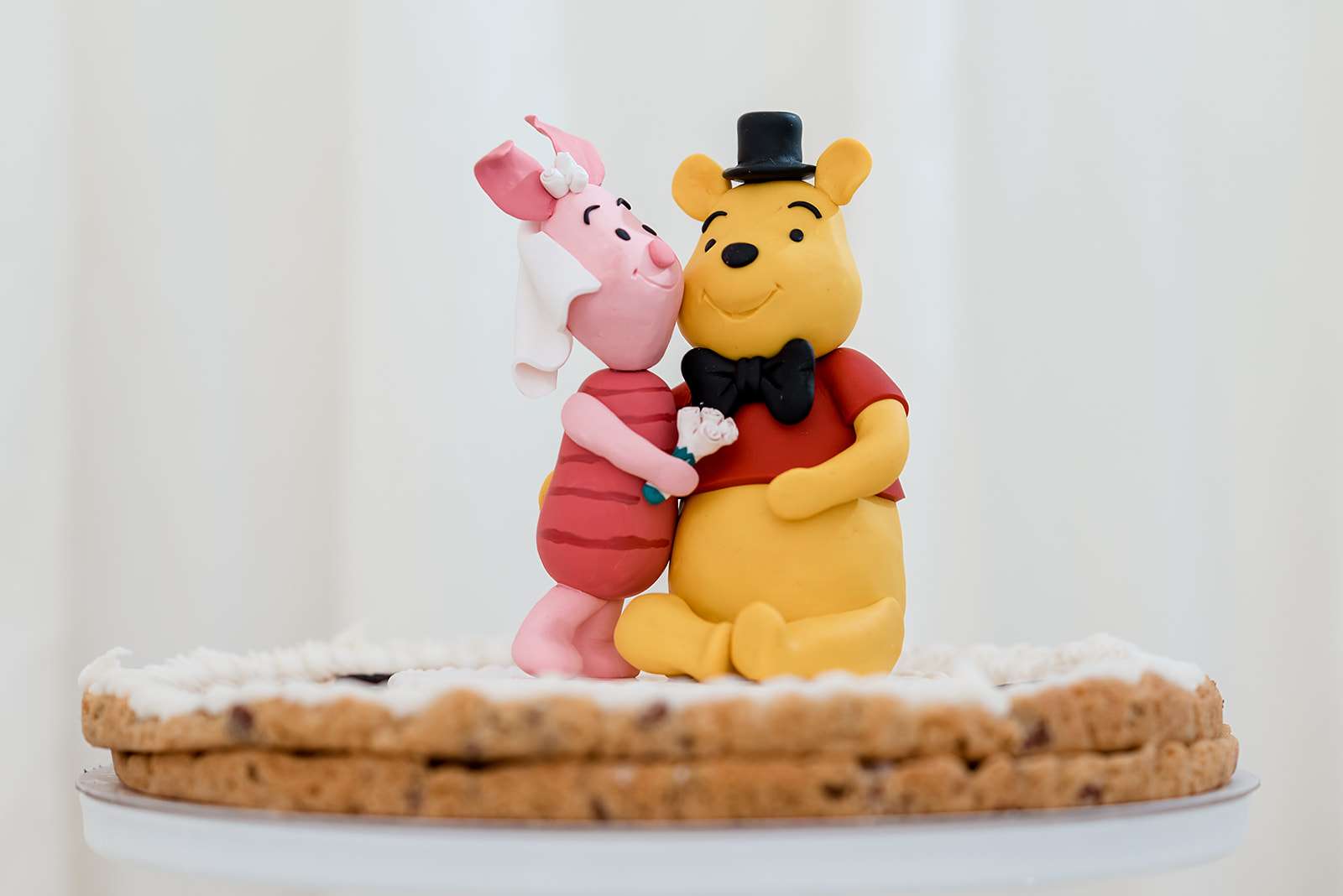 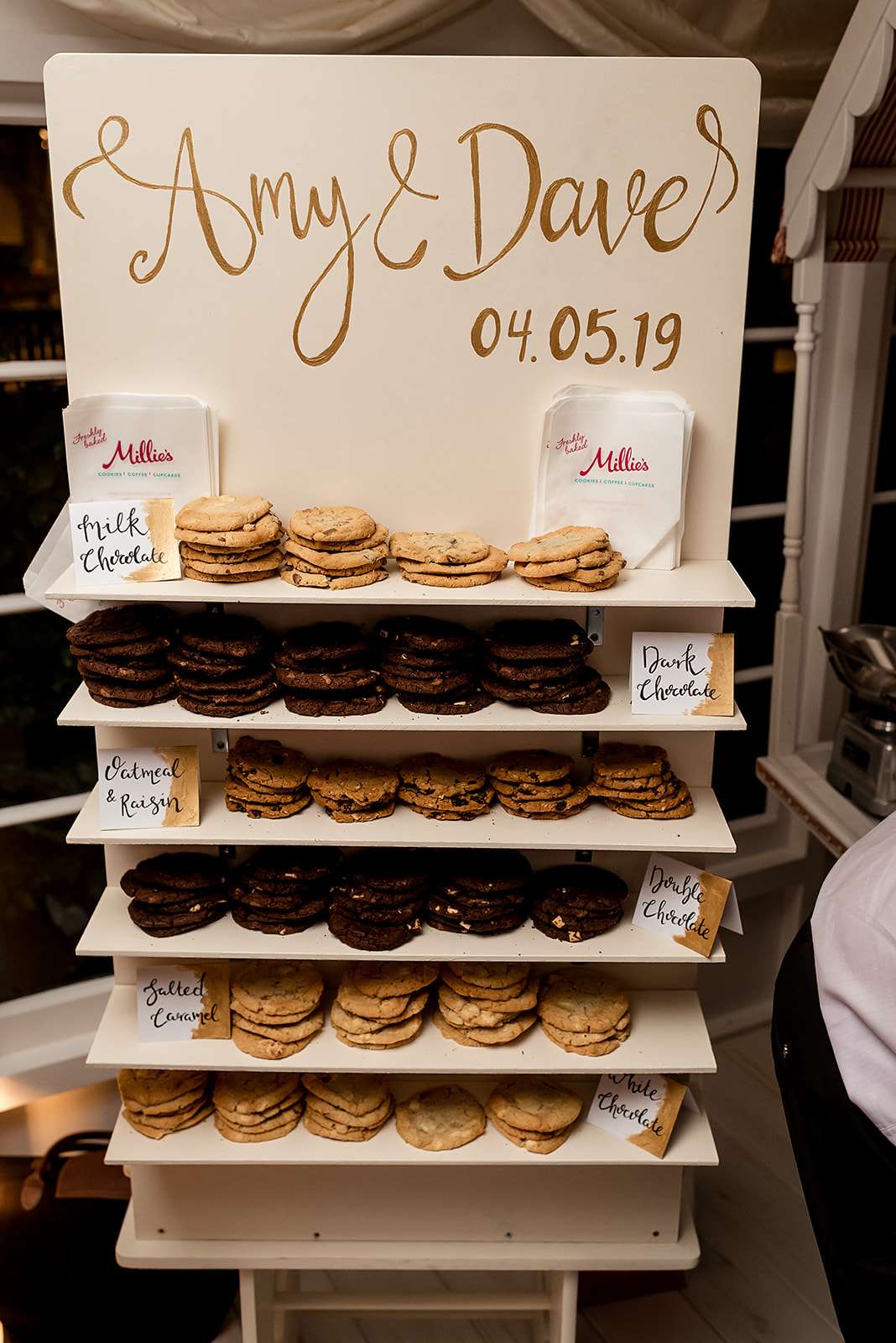 Their final words of wisdom for other engaged couples would be to not worry so much about your guests having a good time. ” When you’re the one organising you get so caught up in the details that you forget that all of your loved ones are there on the day because they care about you, so they will have an awesome time no matter what! ” 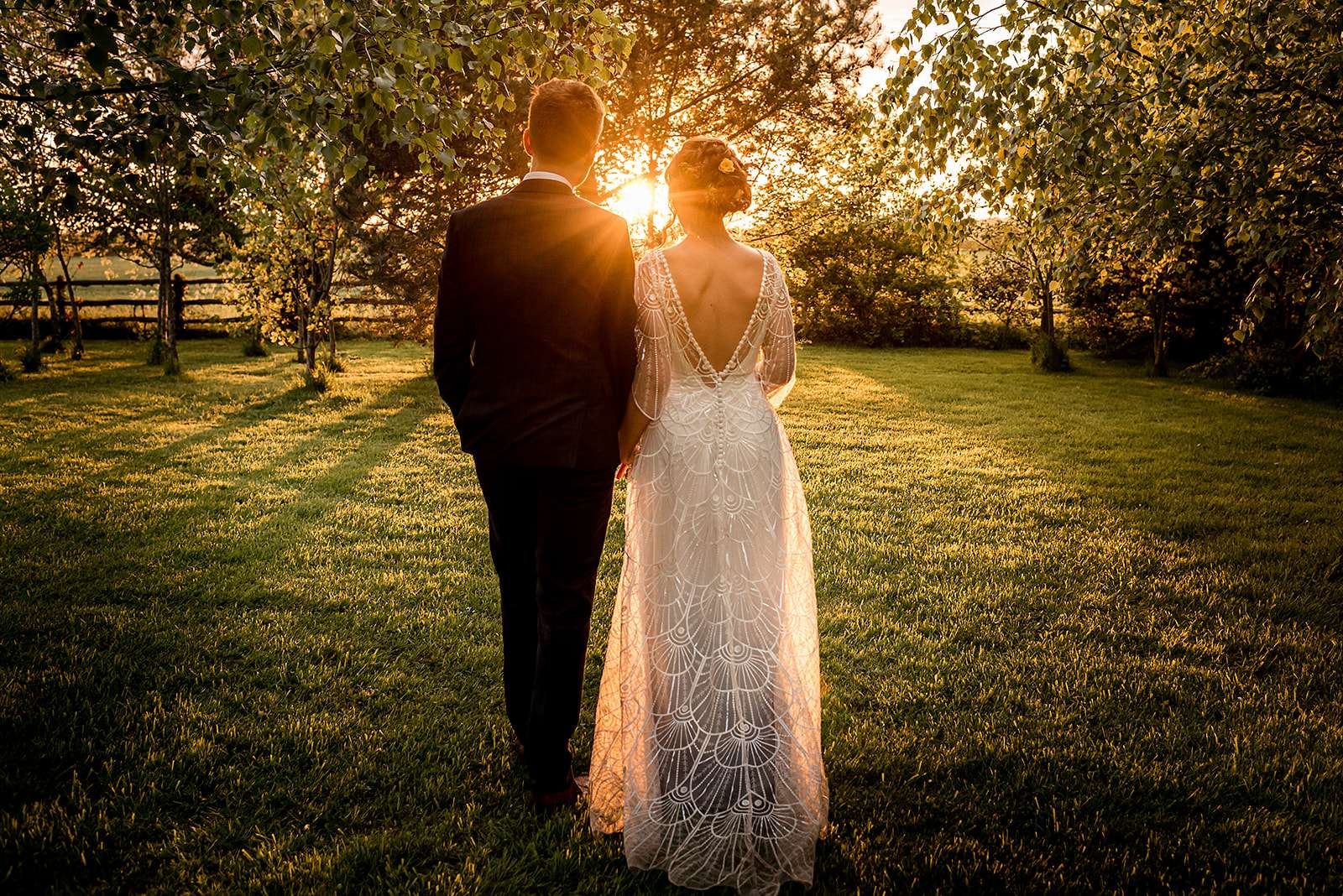 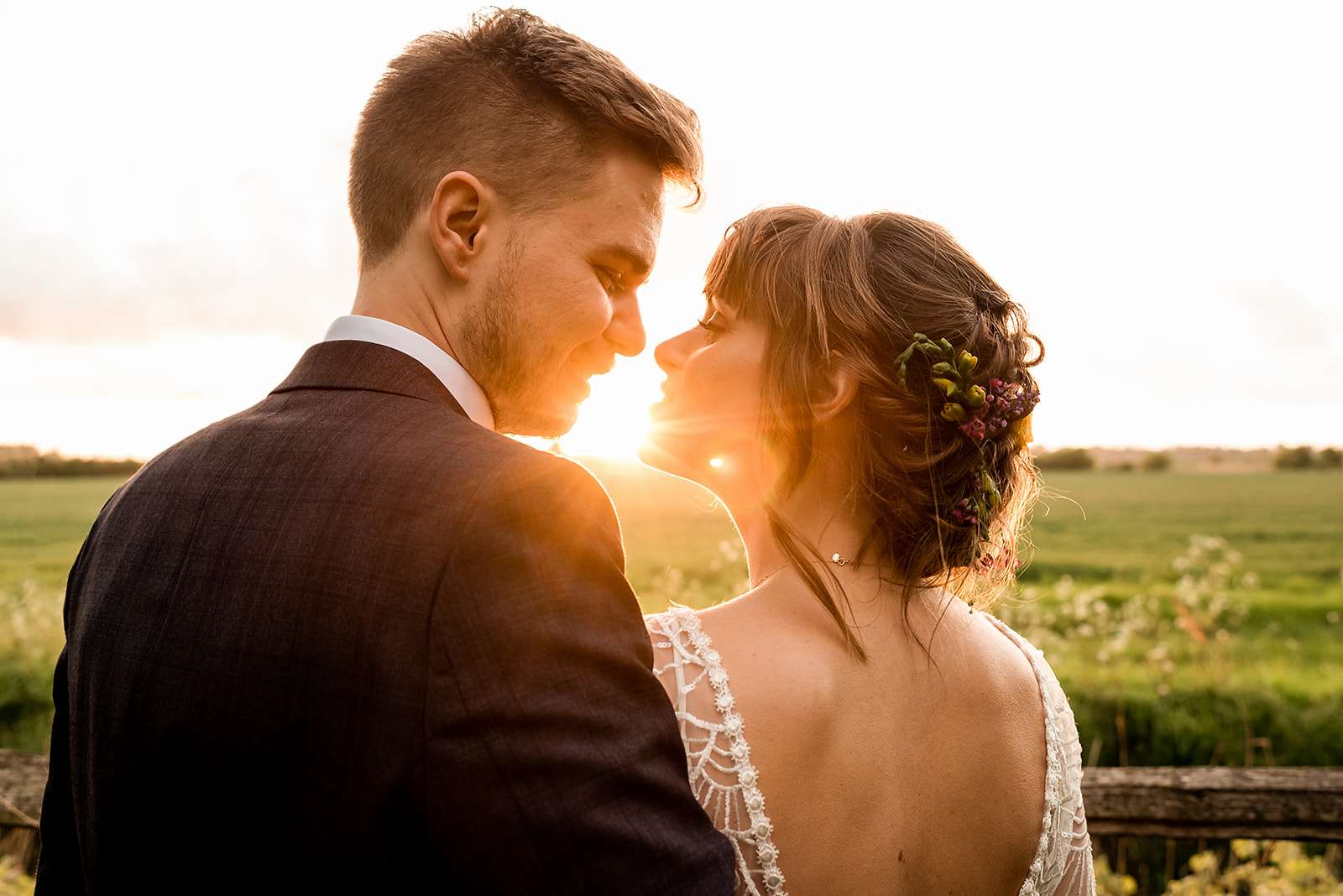 “Enjoy your wedding, it really is the best day ever and try to remember that the most important thing is that you are marrying your best friend, and that is what really matters. In the lead up everyone told me to stop stressing about things that were out of my control, like the weather and I wasn’t really listening. But on the day I couldn’t have cared less about the hail storms, I was just so overwhelmingly happy and excited to be getting married.” 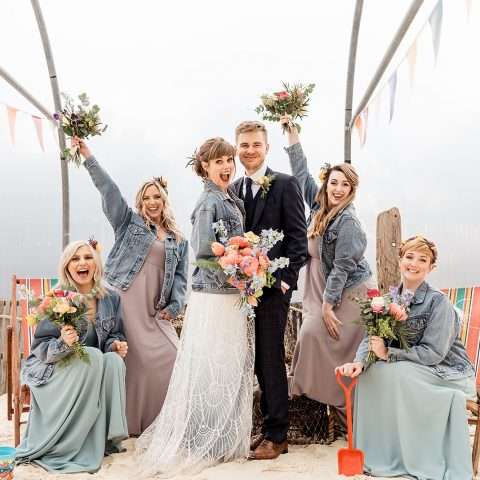 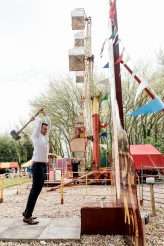 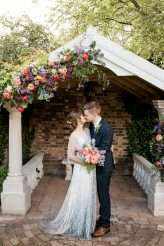 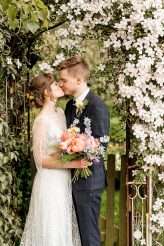 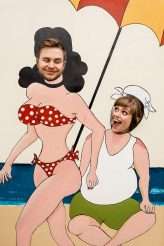 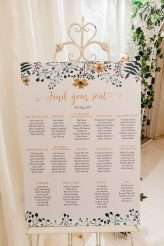 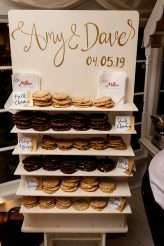 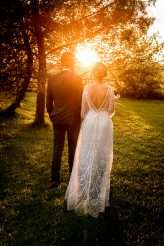