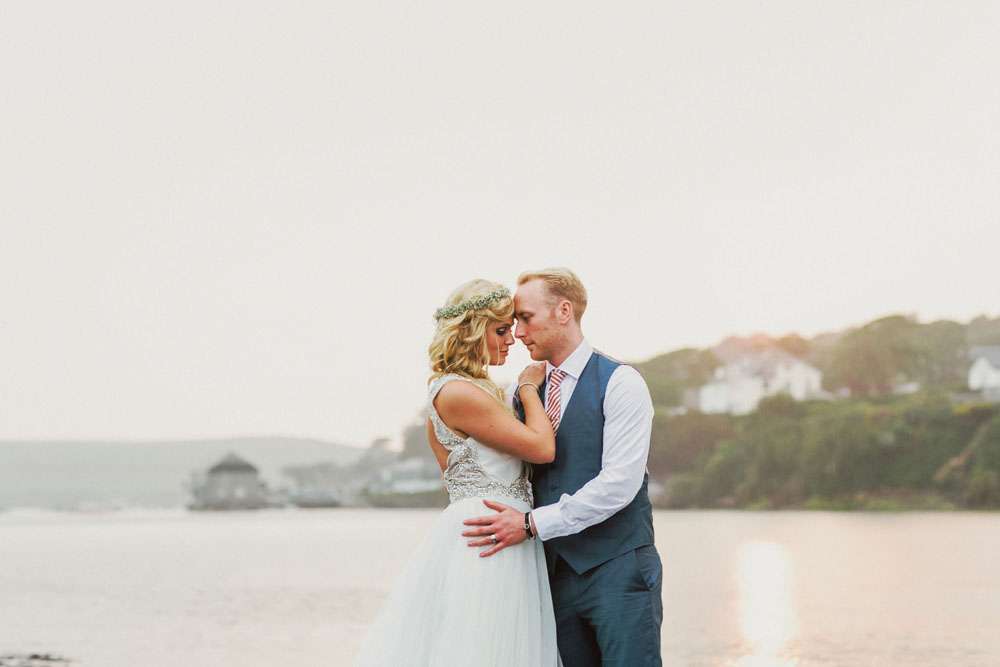 If there’s one kind of wedding I can’t get enough of it’s ones with lots of COLOUR! I don’t know about you, but seeing it all there together makes me so damn joyful. Even with the dark and moody British skies, Matt and Lauren’s May wedding looks super fun, bright and sunny!

The wedding was held in Cornwall, with the reception at Porthilly Farm. “I didn’t want to create an average wedding. I wanted the guests to be wowed and surprised throughout the day”, wrote the bride. “It helped keeping as much as we could a secret from as many guests as possible. I was not a bride who delegated; instead, I worked hard on DIY projects, and hid anything that would give people clues about the day!!” 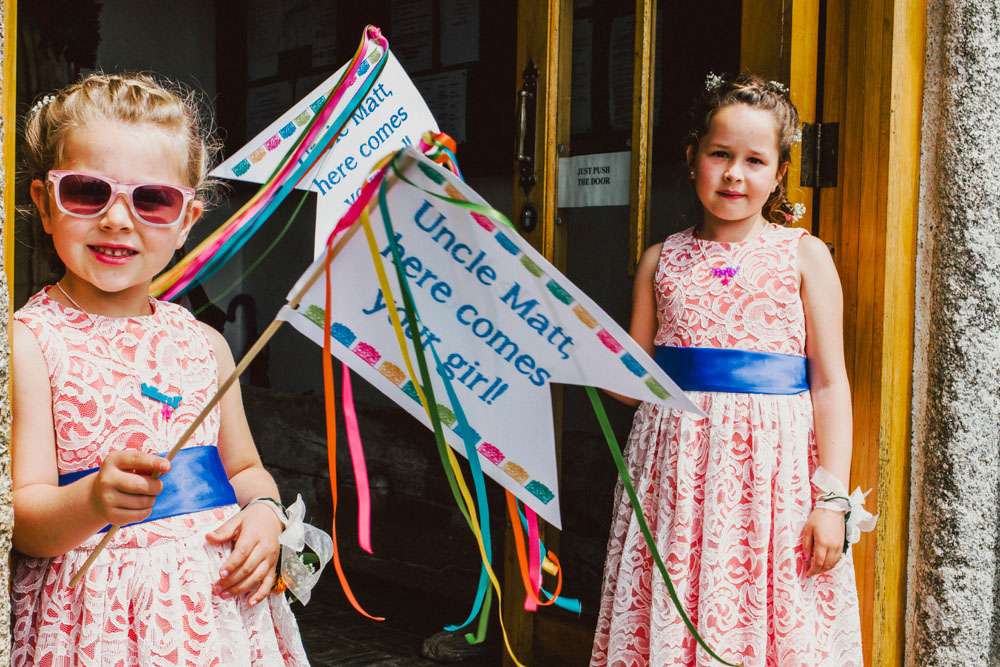 “I wanted to make sure the first impressions of our wedding would set the feel for the day”, she continued. “So I designed the Order of Service and ensured it was fun, casual and didn’t have fancy words or writing. That wasn’t what our wedding was about! I hand-sewed and made each guest a felt flag saying fun words on them to wave during the ceremony. I was determined I wanted a lively upbeat ceremony and figured flags were the best way to do it. That combined with an incredible soul band singing our upbeat choice of songs and hymns resulted in the whole congregation and the vicar enjoying the fun filled but still special ceremony.” 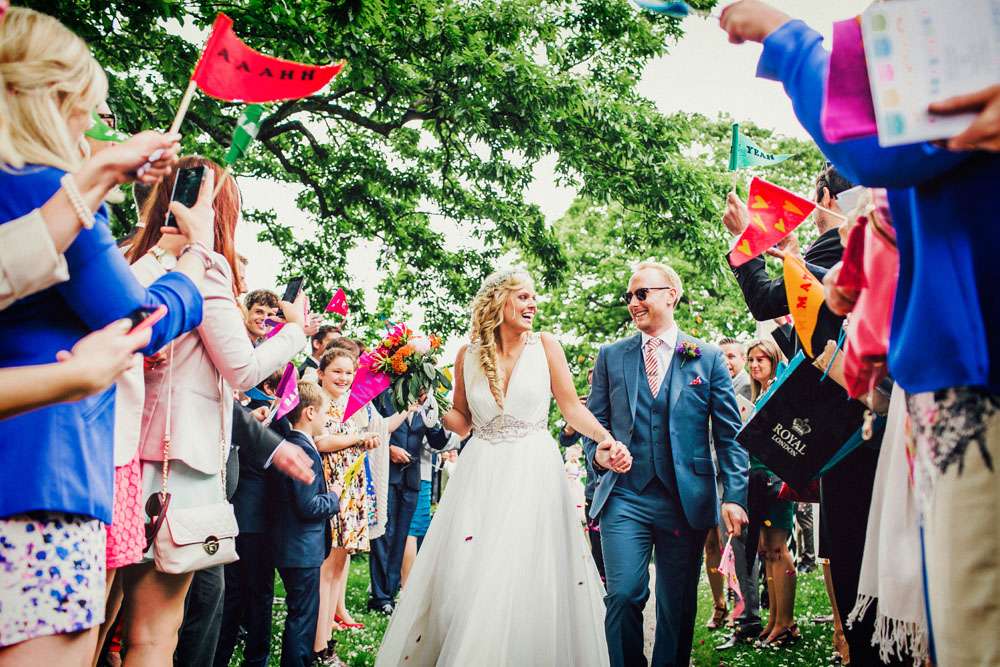 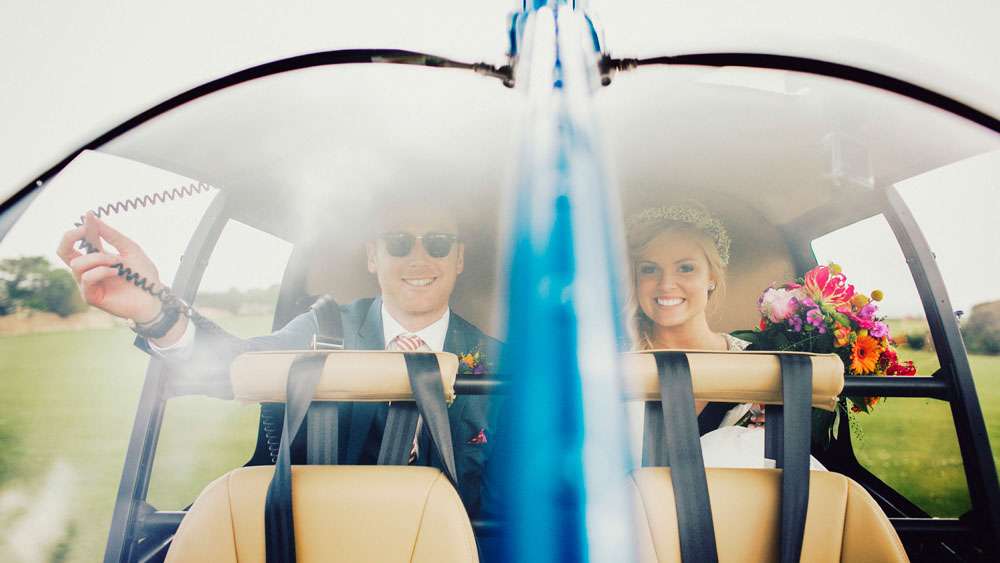 “As soon as we reached the reception, the party was already started by The Mariachis from the Doritos Adverts; just as The Red arrows did impromptu ‘fly by’, which was pretty special. The Marichis were really amazing and knew how to get the party started. After the food and speeches I had my Uncles’ band, Midnight City, play. I am a big Motown fan so having them there, playing my favourite songs, getting all the guests on stage singing, was a real highlight!” 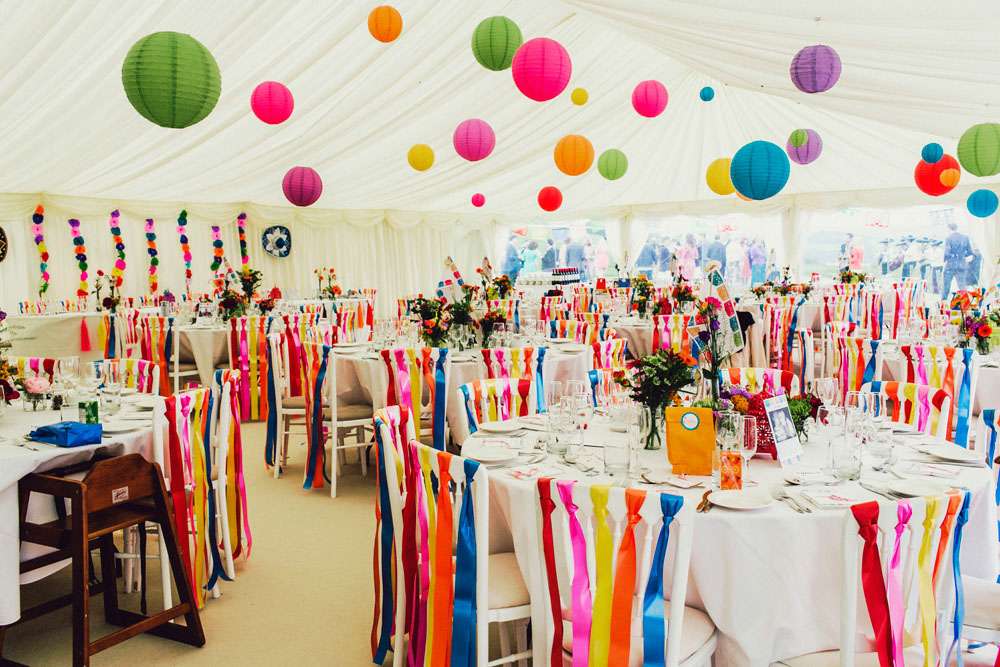 “At a risk of sounding cliché, the whole day was fantastic and I really can’t pick out a specific part”, she said when I asked about her favourite moment of the day. “The fine detail of the planning meant that all eventualities were covered resulting in the day having a really laid back feel where everyone felt comfortable. If I had to pick, the surprise element of the Mariachi Band and of course the helicopter definitely gave the guests something to be wowed by.” 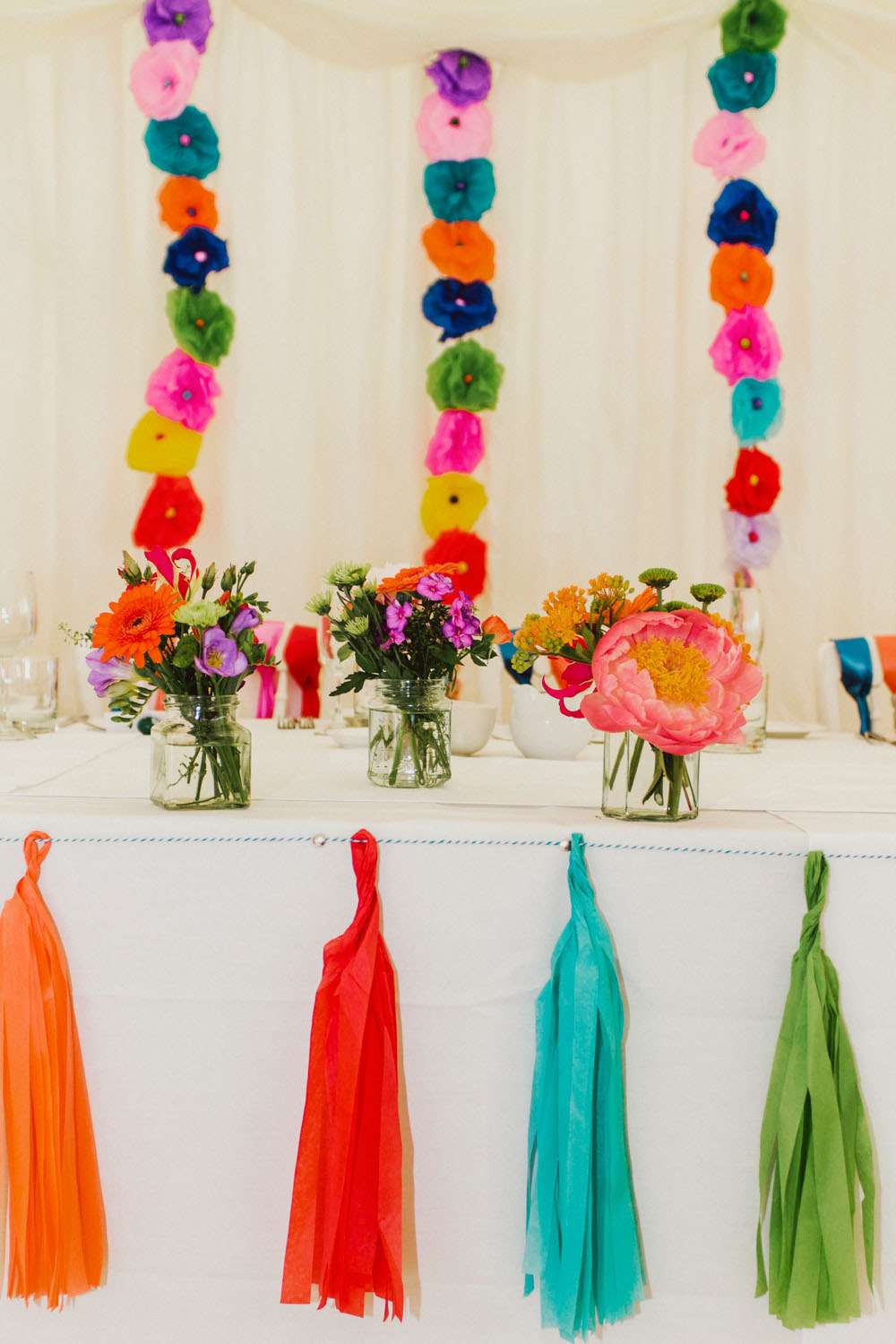 “Our biggest money saving exercise was on the ribbons that we tied to the back of our chairs. My mum suggested floristry ribbon and all of it came to less than £17 in the end! However our advice to other couples would be to ensure that they spend their money on the things that are important to both of you. Some things just can’t be DIY’d. For us, that was the venue, the photographer, the music and making sure our wedding guests had enough food! Those were the foundations to our wedding, which we then built on.” 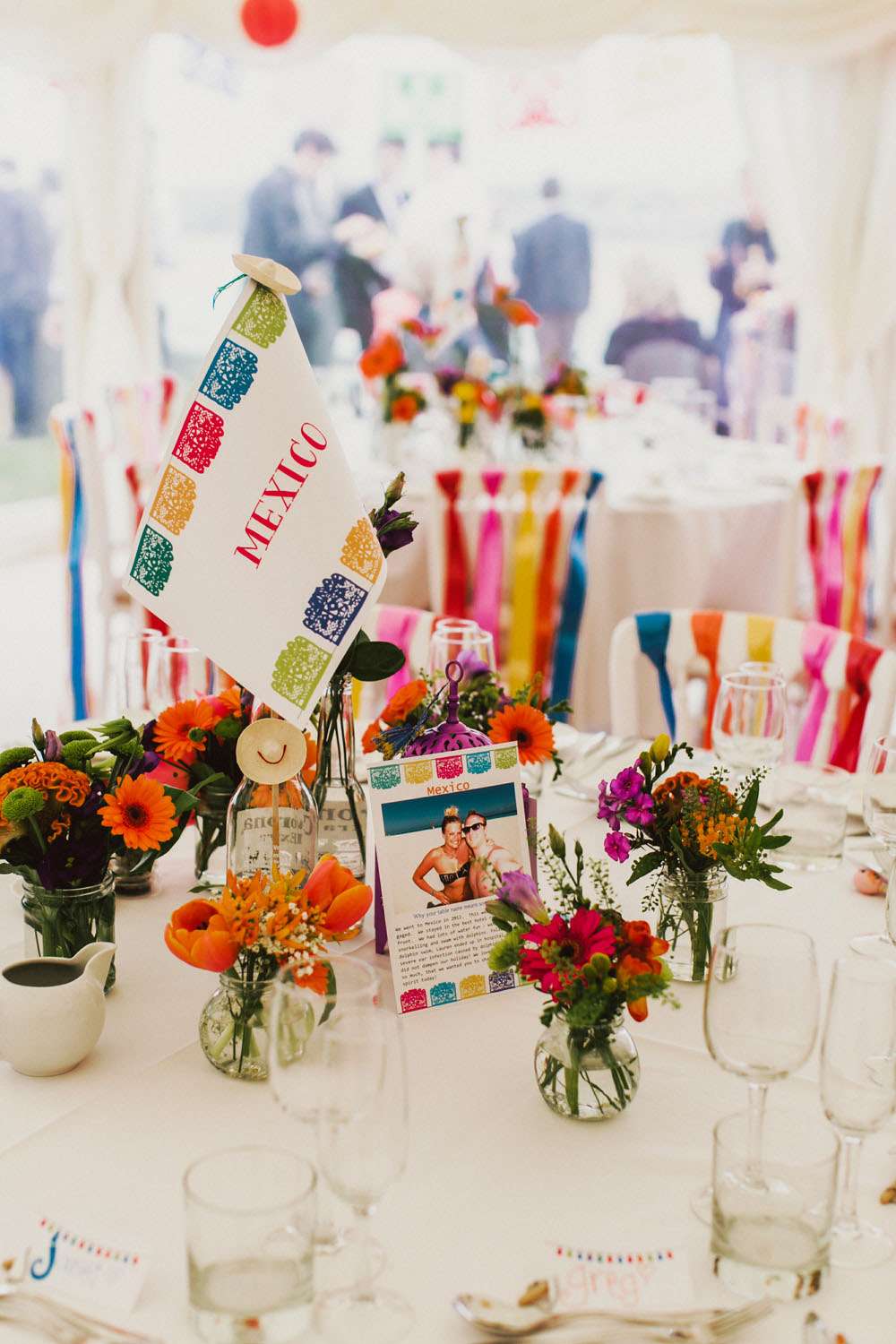 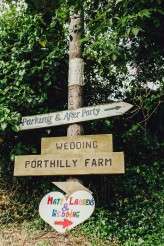 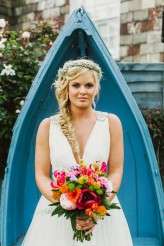 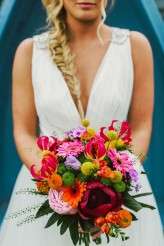 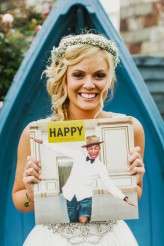 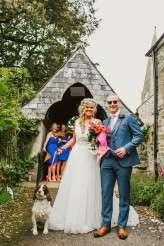 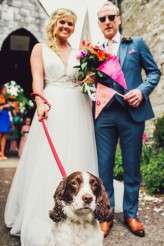 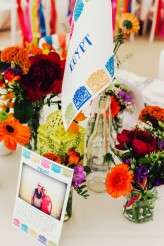 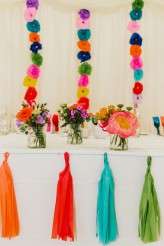 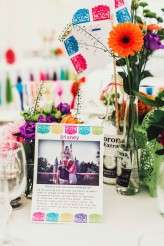 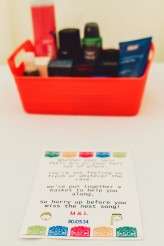 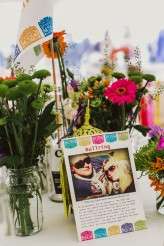 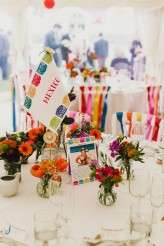