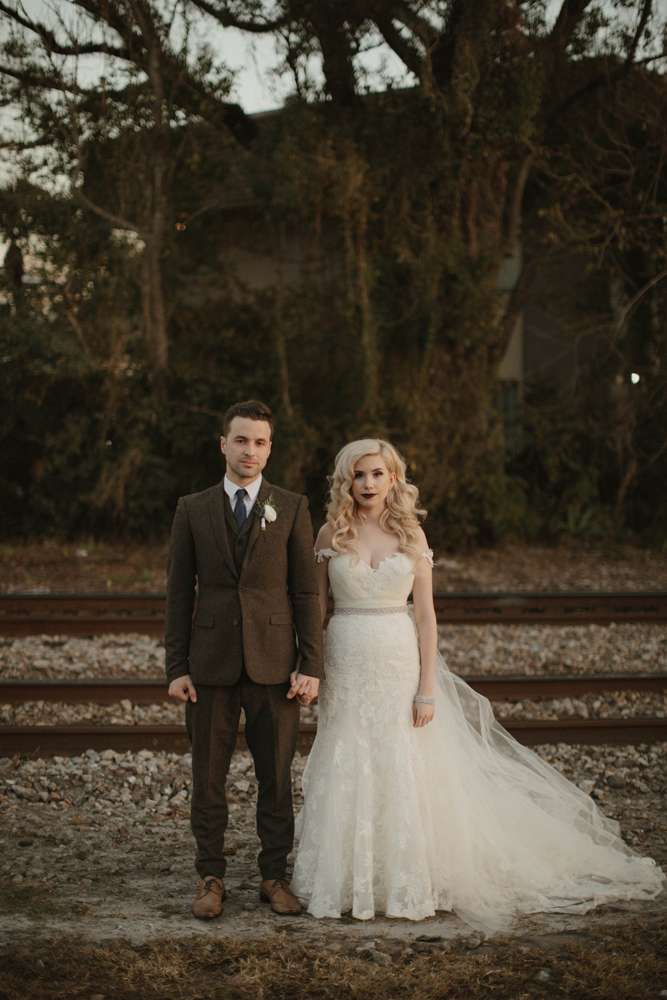 If you’re dreaming of pumpkin spice and snuggly knits then you are going to adore Kristen and Lloyd’s wedding. Almost all of their reception decor was thrifted, bought online and/ or put together by the couple themselves. They hand-painted a globe to use as their guest book (LOVE THIS!) and made magnolia leaf place cards as well as gold spray-painted dinosaur toys for some added fun and a nod to the groom’s love of Jurassic Park!

They met five years ago when Lloyd, from the UK, was in Orlando with his band. ” I pursued Lloyd and convinced my friends to go with me to the next bar so I could run into him again!” Kristen laughed. “He was only visiting from England but luckily I was able to convince him to stay!” 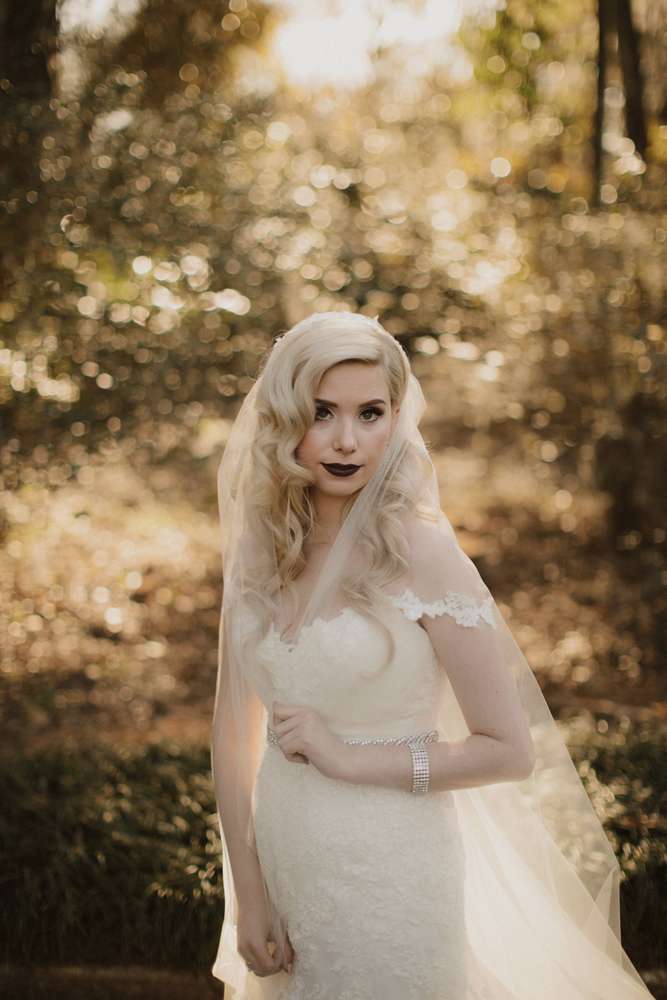 Their wedding was inspired by vintage elements with a touch of Hollywood glamour and a dash of Rock ‘n’ Roll. They also had lots of greenery which was also reflected in the wedding party’s outfits. “The inspiration for our wedding was our personalities and passions”, she continued. “I am studying biochemistry so we had test tube rack centrepieces filled with flowers, Lloyd loves Jurassic Park and travels around the world for work so we had travel themed decorations and our gold dinosaurs!” 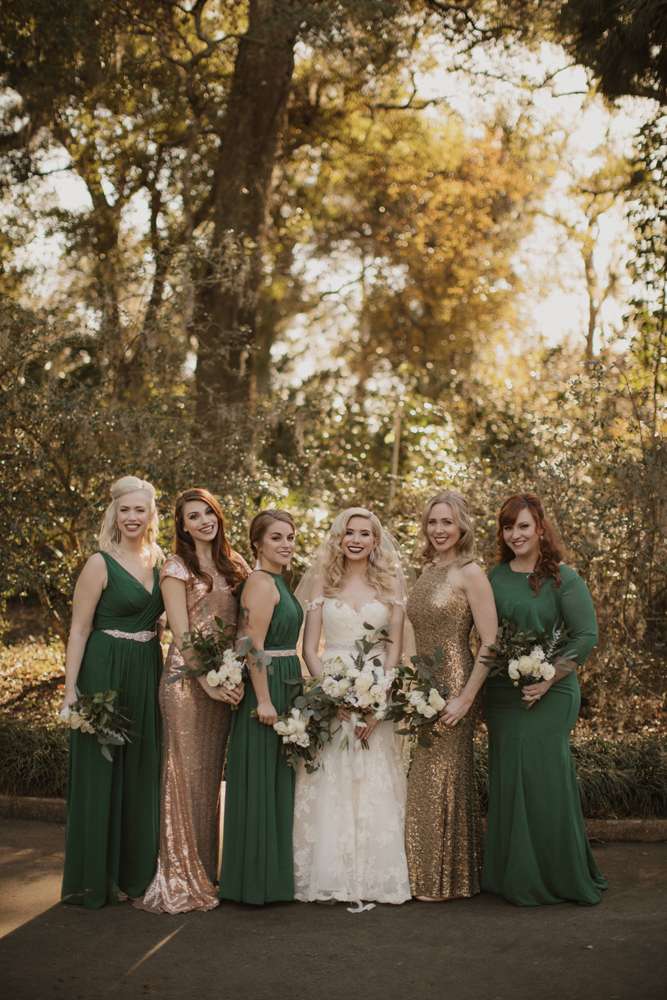 “We had an Asian fusion buffet and a sushi chef station at our cocktail hour instead of traditional wedding catered food. We sent out email invites for the actual wedding and handmade Save the Dates with handmade magnets. We tried to DIY, thrift and get as many pre-owned items as possible (including my dress which I bought second-hand and had customised by adding extra tulle). We also requested an early 2000s emo/pop-punk megamix from our DJ which made for a ridiculous and awesome dance floor.” 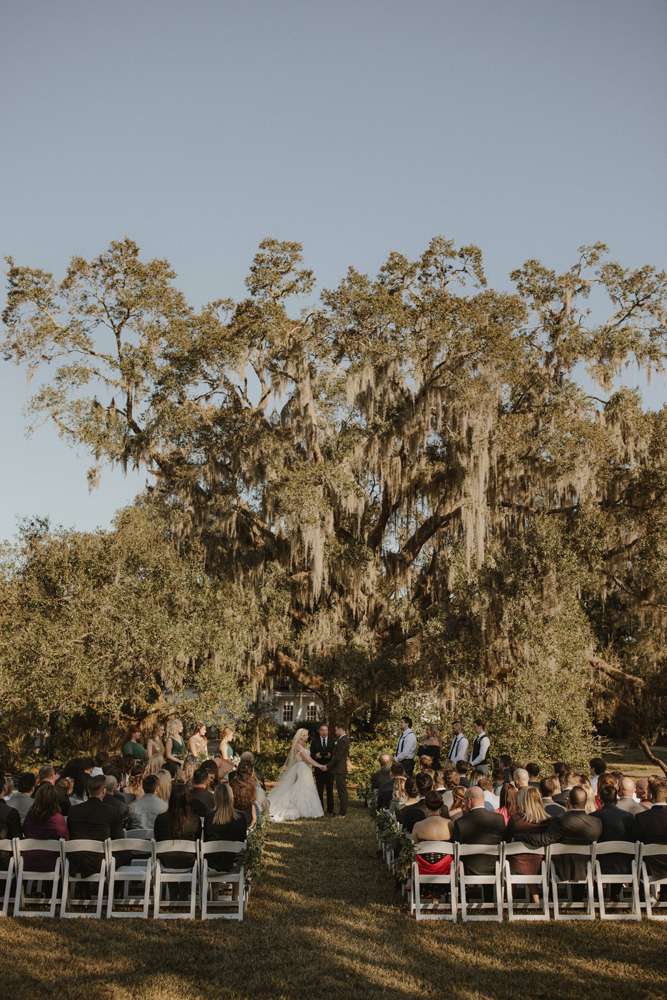 The ceremony was held outside (which, although it was technically winter, was totally possible in Florida!) at the Harry P Leu Gardens. It was a short and sweet service with some personal touches. “Lloyd walked down the aisle with both his parents and then I did the same. We skipped some ceremony traditions in place of ones we felt were more us such as a wine box ceremony. The Florida ‘winter’ weather was perfect, the gardens were perfect and we got married under a beautiful tree. The spot we chose wasn’t one of the pre-determined ‘wedding areas’ but we really wanted to be married under a tree and our original choice was destroyed by a hurricane. We got to pick our own custom spot (a week before the wedding) and were the first to use it! We had instrumental covers of the Jurassic Park theme song, Han Solo and The Princess (from Star Wars), and A Married Life (from Up) playing during the ceremony. ” 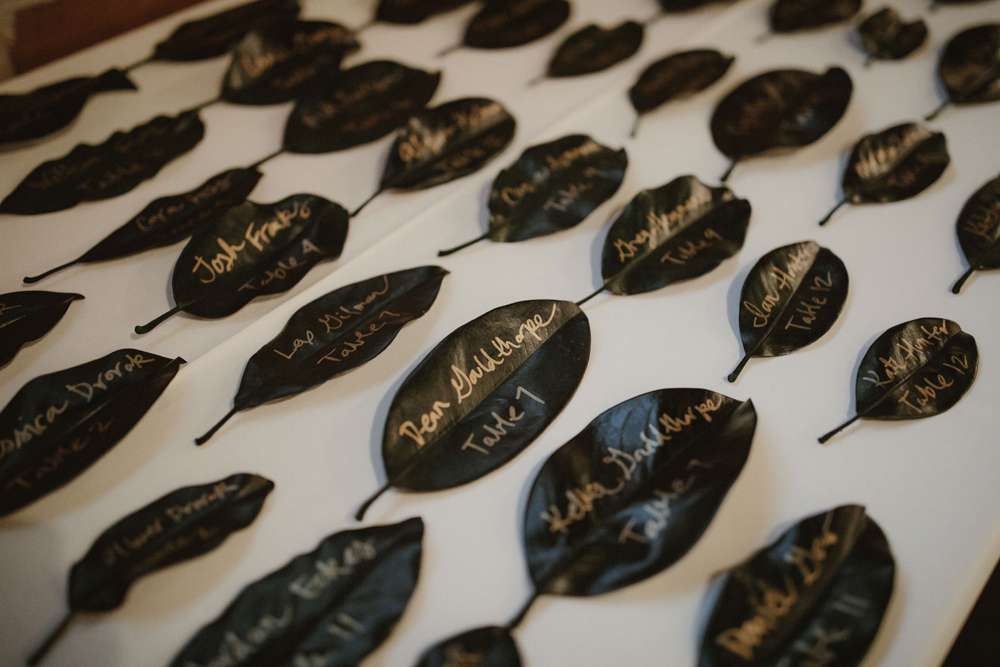 Their wedding highlights were picking and deciding on all the decor (“Choosing little pieces that represent us to fill our space – we loved that!”) and, on the day itself, spending time with their loved ones at their reception. Their advice to other wedding planning couples is to make the day as much about the two of you as possible. “There are no rules other than having a great time and getting married. Do what you’d like, make your own traditions, invite whoever you want to invite, and don’t invite anyone who won’t bring you happiness on your day. Don’t feel pressured by the expectations of others.” 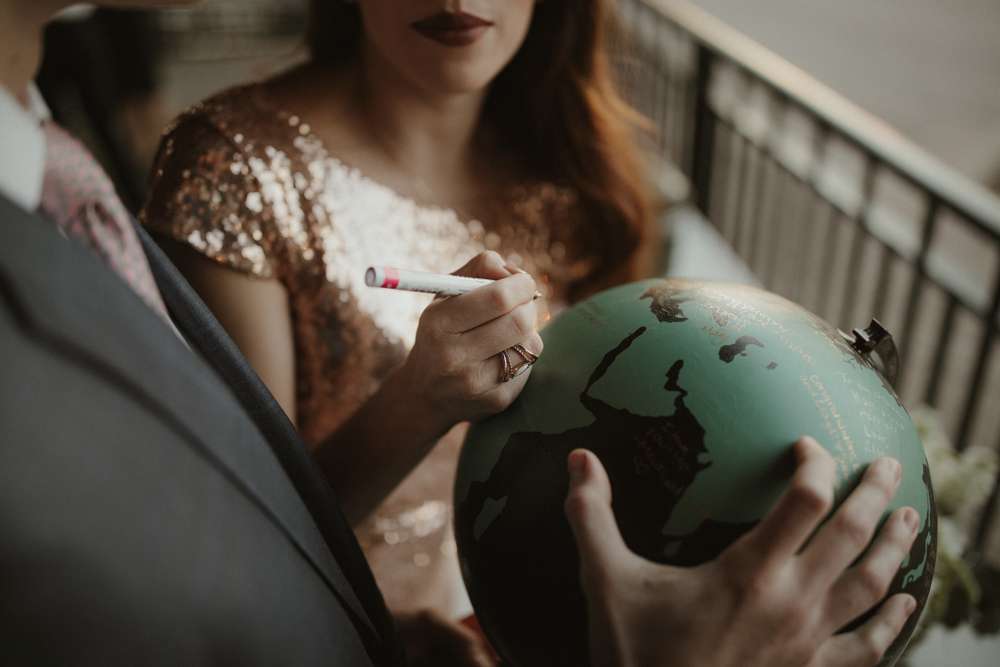 “Enjoy your time together, do your best not to argue over the finances (I know that’s tricky with such large amounts of money going out), or silly details. Trust your vendors, family, and friends who offer their help. It my seem easier to have it all within your control and do it all by yourself, but it’s not! I would have lost it if I didn’t have a day of planner/ coordinator. That is worth every single penny! It made such a difference, I couldn’t imagine our wedding without Jaclyn and her team. She handled everything, scheduled the day of, told us where to be so we never had to look at a clock, made sure to schedule us some time alone together to really soak it all in, and packed up our items so we were able to enjoy our after party! I tell everyone who is getting married to 100% get a day of planner if they can fit it into their budget.” 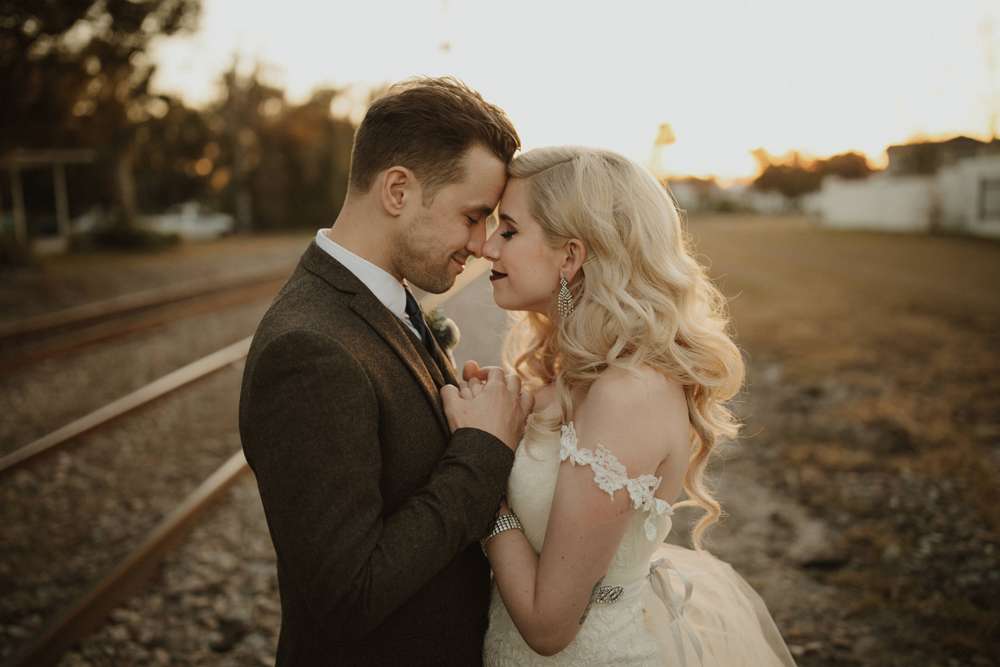 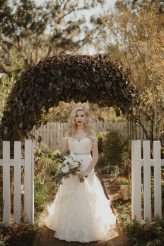 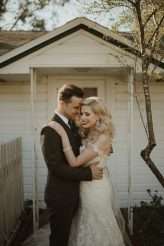 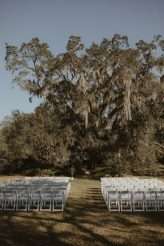 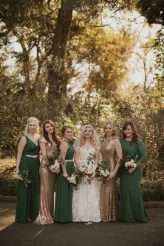 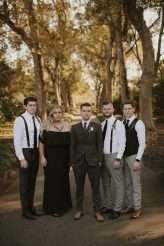 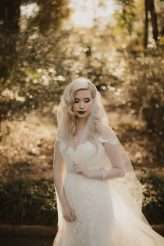 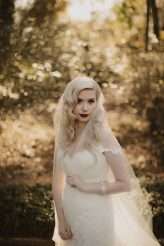 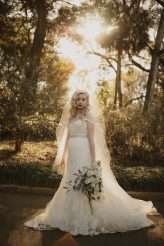 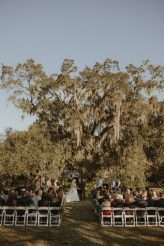 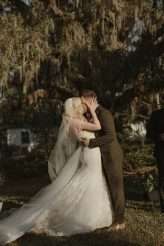 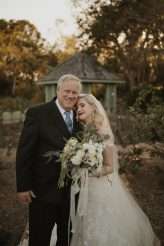 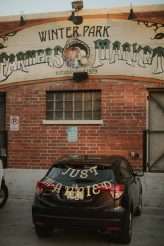 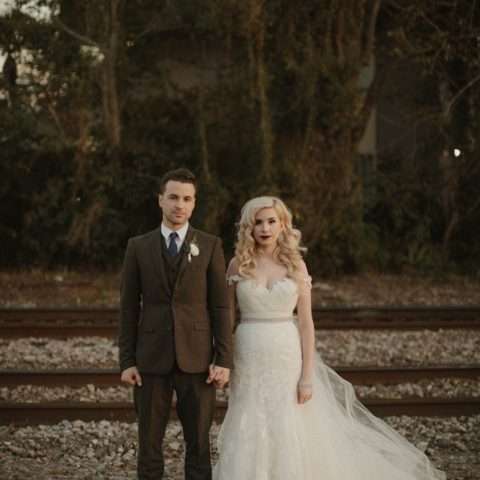 Cassidi & Rob were married at Moorestown Community House, New Jersey. They wanted the wedding to have a flea market vibe with touches of Rock n Roll. "Our colors were charcoal, dusty rose, powered pink, mixed shades of ivory and creams", the bride explained. "We had a ton of blue mason jars, old bottles, and milk glass. A million doilies in all shades of whites, creams, and ivory. Each table has random little props, some tables had small vintage white dogs, or old skeleton keys, or buttons."

Throwing out as many wedding traditions as they could, Dano & Holly planned their wedding with one golden rule - to have nothing cookie cutter. "I have strong aversion to anything cookie cutter, so we threw out a lot of wedding traditions," the bride began. "We wanted our wedding to be a party that we would never forget. Our theme was something along the lines of 'vintage, woodsy & DIY'. I wore green. We cut the pie (no cake) with a machete. Our friends built the biggest bonfire that any of us had ever seen and we danced in the rain under the stars."