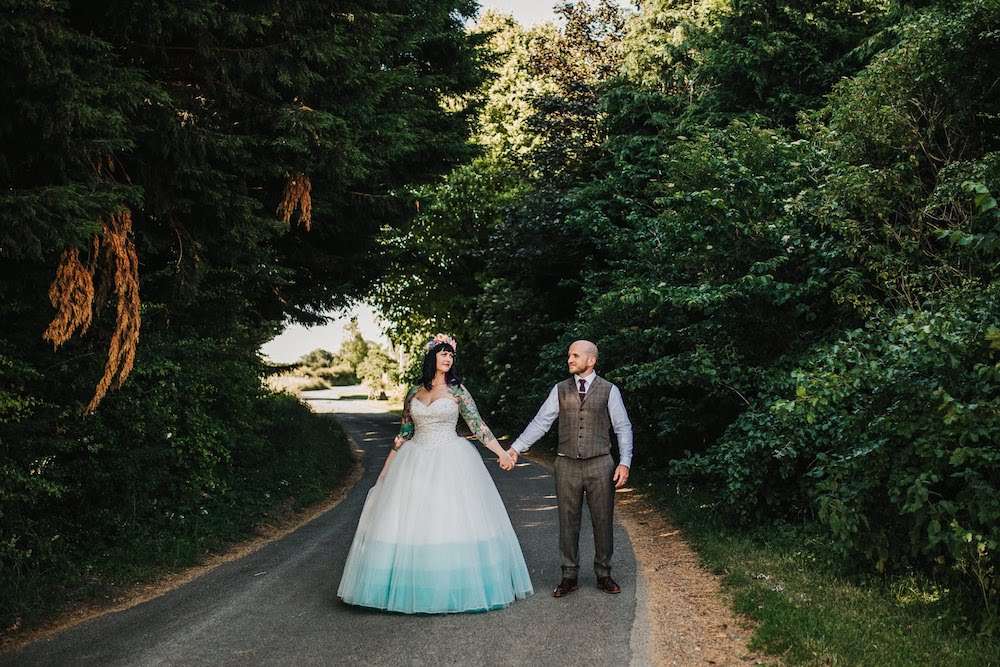 Liz and Ade decided to have a wedding that totally reflected what they wanted, getting rid of ALL the traditions they didn’t find important – and we have ALL the love for their beautiful day! They transformed their dry hire venue into a bright and relaxed fiesta, held outdoors in some gorgeous (and unusual!) June sunshine. 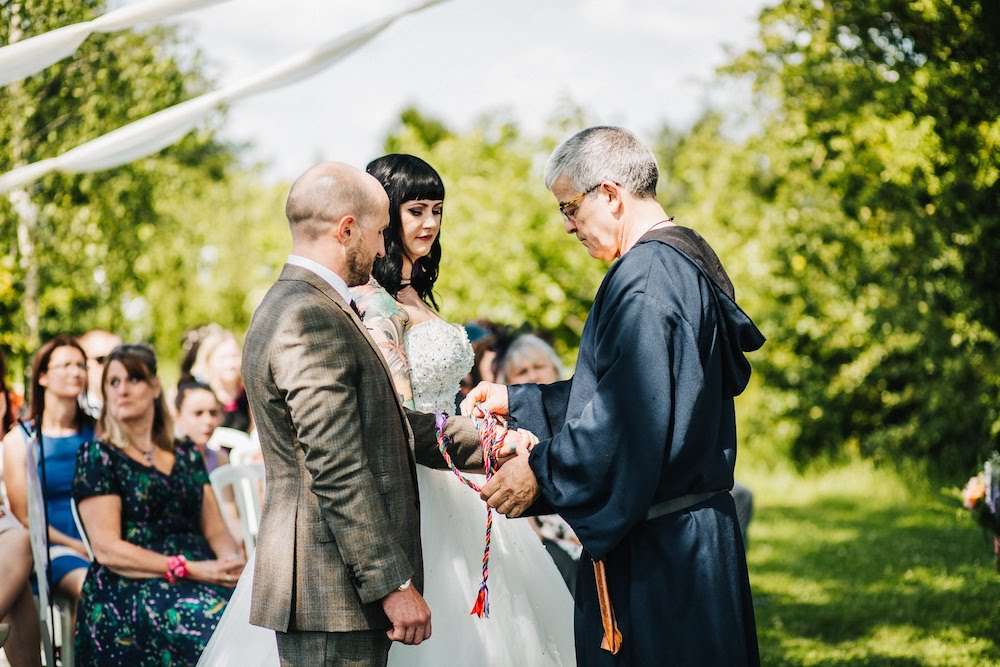 “I’d always wanted to get married outside, but it’s not as easy as you’d think in England!” Liz warns. Despite this, once they found their dream outdoors venue – Huntsmill Farm in Buckingham – everything fell into place. “We chose to have a handfasting ceremony in the gorgeous grounds of Huntsmill Farm, having legally married at a pretty registry office one month previous. Martin and Rhiannon from Perfect Handfastings were amazing and lead such a meaningful ceremony – everyone commented on how beautiful it was! No one had been to a handfasting before and all enjoyed something a little different.” During the ceremony, they handed out cake and mead to everyone. They also chose to have an unplugged ceremony: “It means so much to me that you can see everyone enjoying the ceremony rather than looking through their phones.” 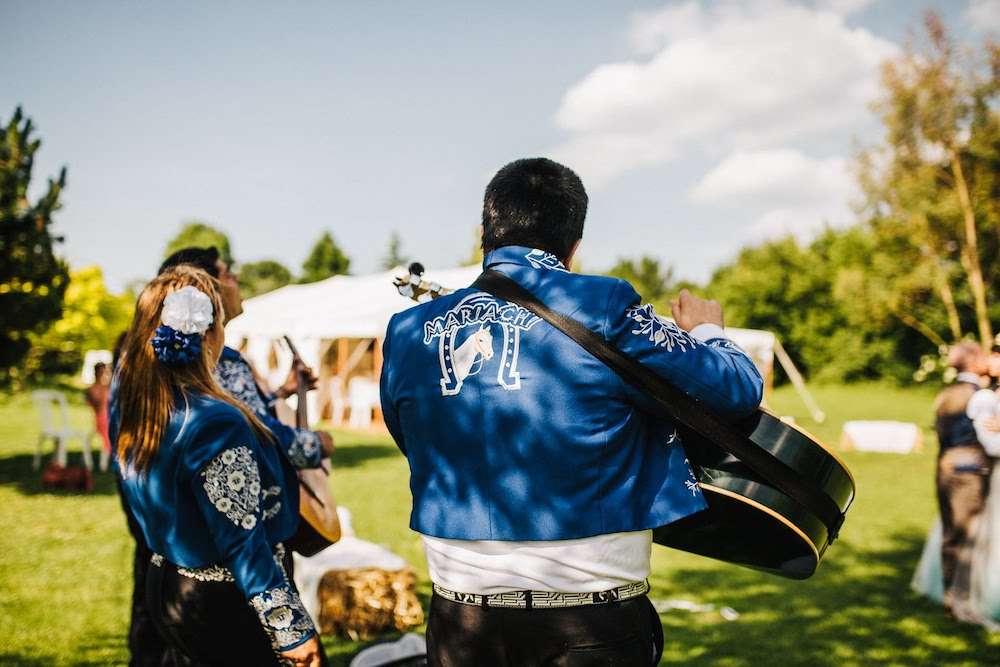 The ceremony took place on a beautiful lawn underneath voile woven through the trees by a small army of friends and family. All the chairs were laid out beneath it, giving a sense of being indoors and outdoors at the same time. And as the venue was totally dry hire, they’d put up the marquee the day before, but everything else was up to Liz, Ade and their team, giving them loads of room to be creative.

“The day before we had a small army of incredible friends and family help setting up all the tables, laying the chairs, decorating the marquee, and loading out aaaall the booze.” (Top tip: Liz’s dad was super savvy with scouting great deals on wine, using Christmas and Easter holiday deals with spirits. This enabled them to buy all the alcohol for the day guests.) 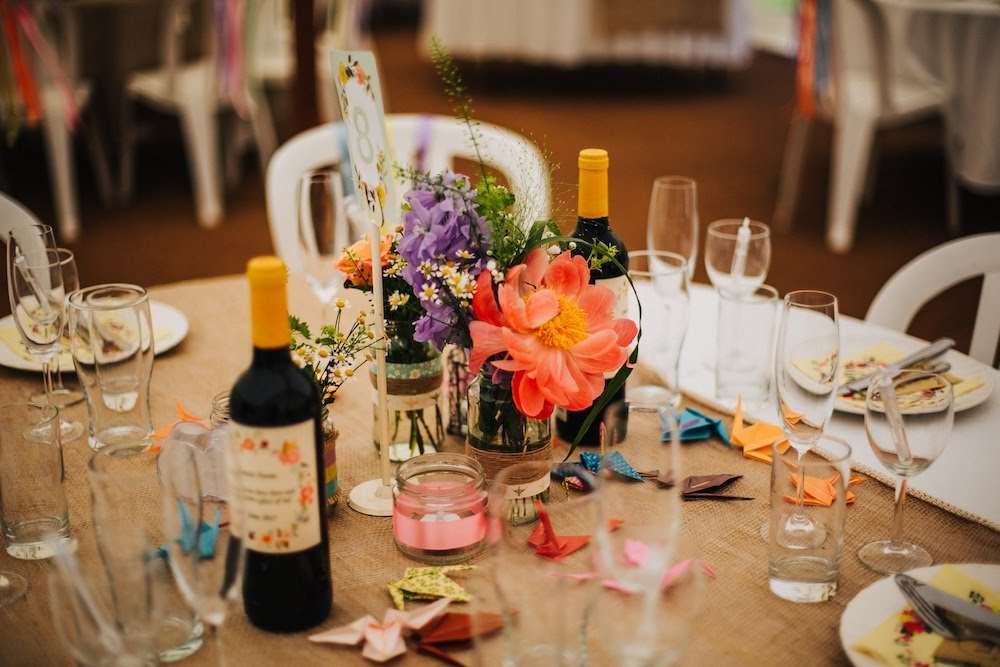 Their DIY decor was also a communal effort from them and their pals: “Apart from all the glue gun burns, I really enjoyed the crafting. Ade did an incredible job and we had fun doing it all together. It was so special the way our friends and family rallied around us and put in so much time and effort for us.”

Liz’s dad made their white pallet table plan and customised labels for the table wine, whilst Ade’s mum made hessian table runners and Ade spent hours making a fake wall with photo frame holes, and decorating jars to put the flowers in. Signature Flowers made stunning arrangements full of giant blooms on a dreamy peachy colour palette. Liz also made some flower hoops to hang in the marquee which matched the bridesmaids’ homemade flower crowns. 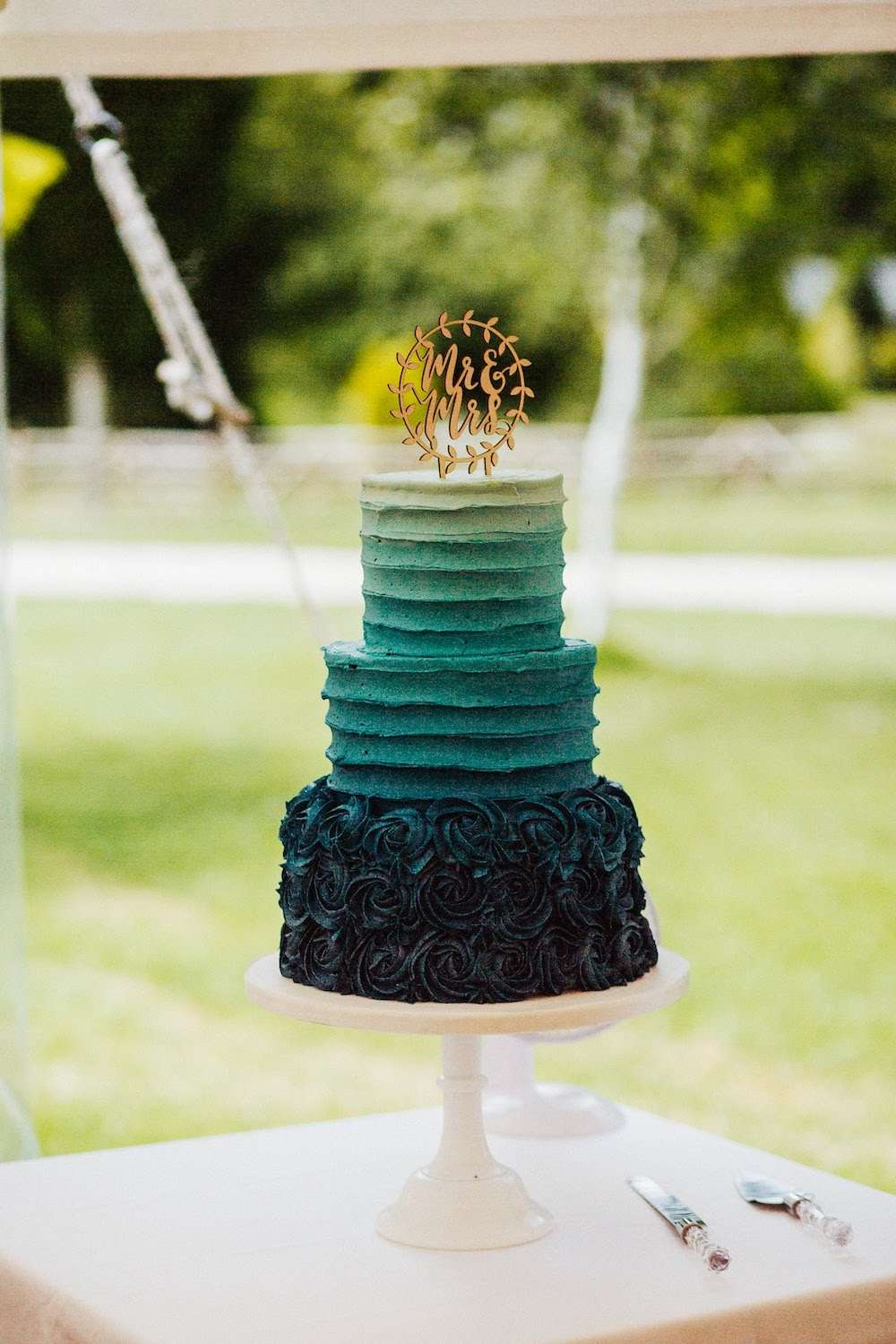 With Ade’s favourite food being Mexican, they used that as the inspiration for the decor, drawing on bright and colourful fiesta vibes . Liz’s dress was a beautiful ruffled Mori Lee dress with a ombre teal skirt which perfectly matched her teal-trimmed Crown and Glory veil and their gorgeous cake, whilst her bridesmaids were all in summery brights from ASOS. Bold origami cranes were scattered over the table, rainbow ribbons were tied to the back of chairs and a colourful paper cactus garland hung behind the top table (where Liz held a GENIUS “Veto” sign during best man speeches.) 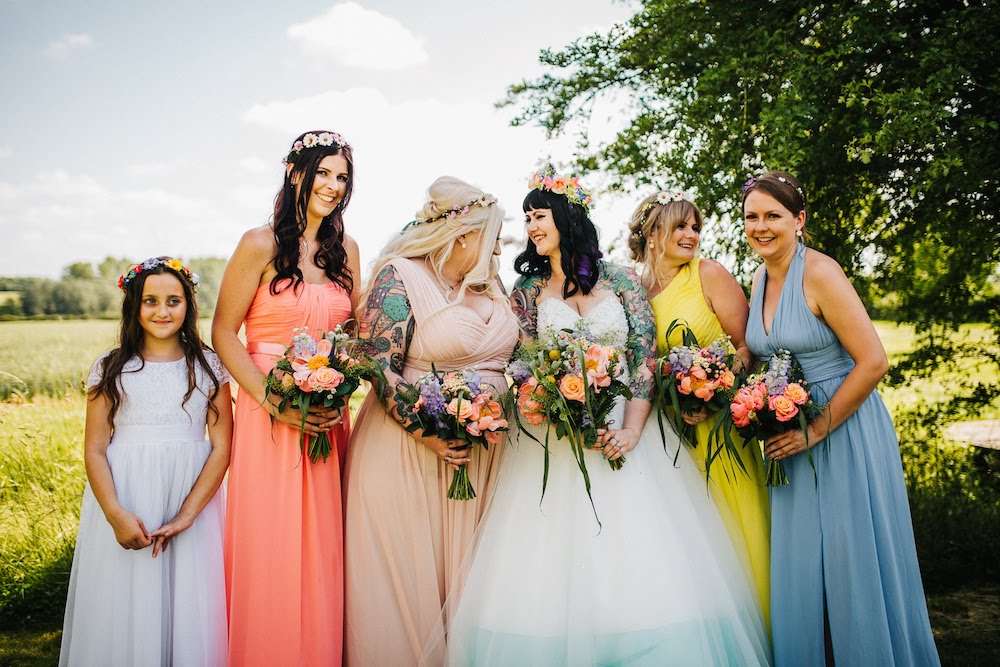 Guests enjoyed a live mariachi band playing, and were served delicious Mexican food from a Cantina Carnitas truck (we’ll take about seven of the Fully Loaded Nacho Boxes, please…)! “We debated having a ‘normal’ sit down dinner for ages, but then decided we should go with what we love. Having Mexican food was such an awesome talking point. People also loved it! We also had cheese toasties from Meltsmiths in the evening, which was my choice – they were amazing too.”

Liz and Ade’s advice for couples is simple: “Spend as much as you can on photography. Do your research – it makes such a difference. It was definitely what we spent the most on as it was just the most important thing – I adore looking through our photos!” We can totally see why – the way the day’s been captured, bathed in that golden light, is just a stunner so thanks to Emilie May! 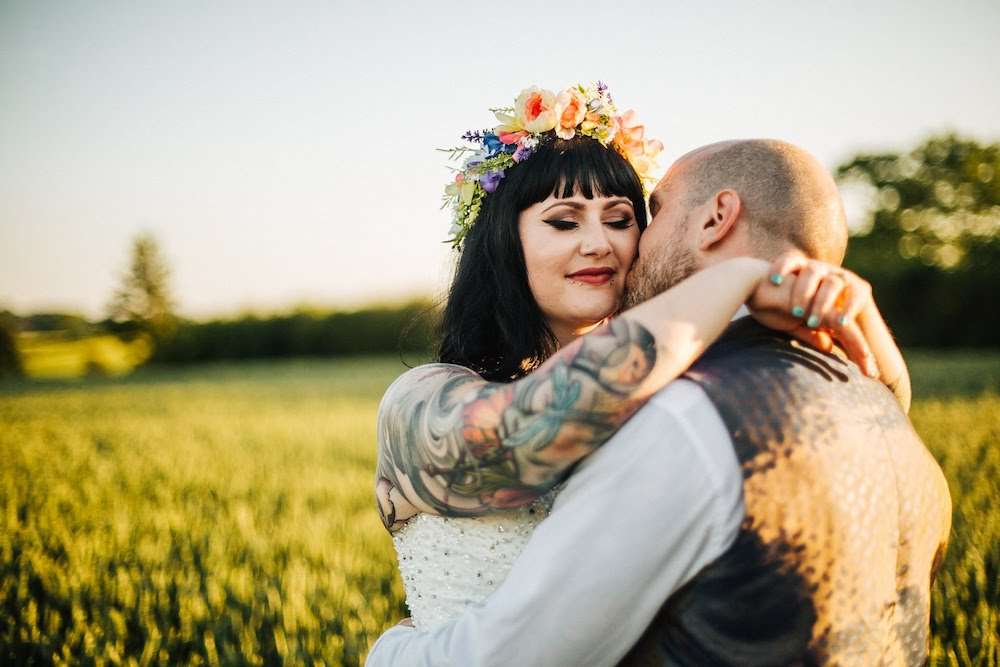 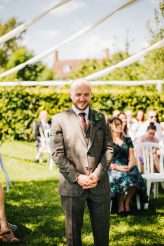 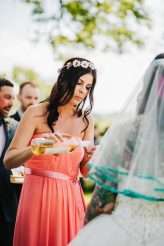 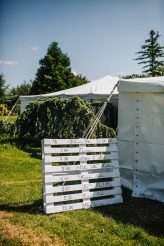 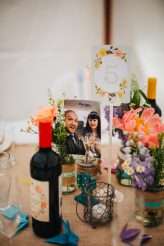 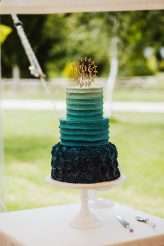 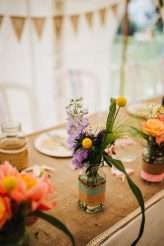 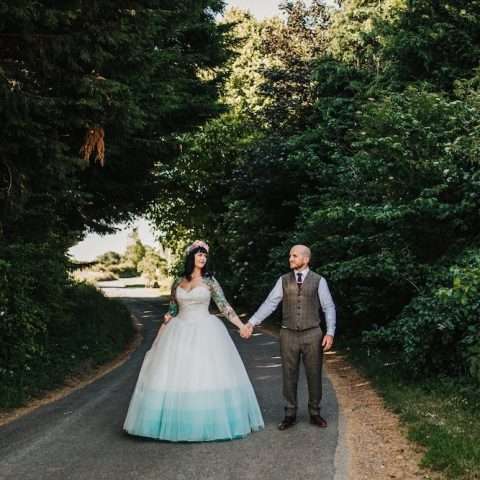 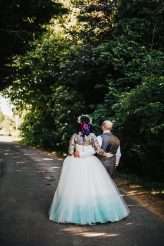 hey wanted to reflect their mutual love of tattoos. It was also a bit of a confetti explosion of colour and they ended up choosing quite a few Mexican inspired things like piñatas and sacred hearts - although this wasn't an intentional theme.