As city backdrops go, I have to say Hull is killing it. The colours and street art painted on its walls along Humber Street here wake you up and shake you up, and there is a Killers lyric graffitied in hot pink – I am in love. It’s perfect for urbanites wanting something edgy and contemporary for their wedding or engagement photos. Colour, culture, and plenty of buzz – it has it all. 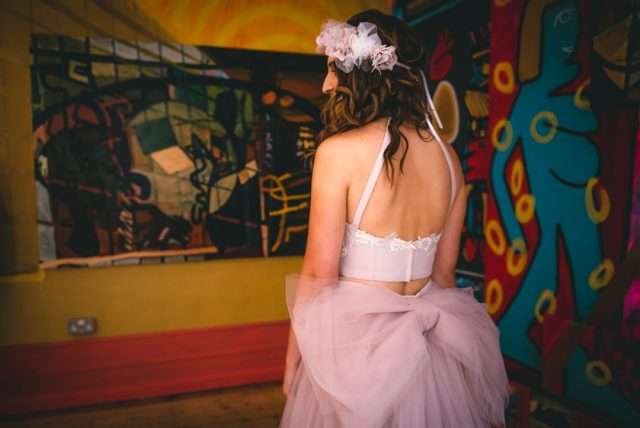 The shoot is also ticking a lot of wedding style boxes by having a customised denim jacket, a pinky blush veil and dress with the biggest, cutest bow on the back, all complementing the pink trousers and on-trend claret velvet jacket combo that makes up the second outfit. Rather than being lost in the noise and colour of the full-on backdrops, these softer colours and shades really shine alongside it all. The message? Colour is your friend and you should never be afraid to use as much of it as you want on your big day. 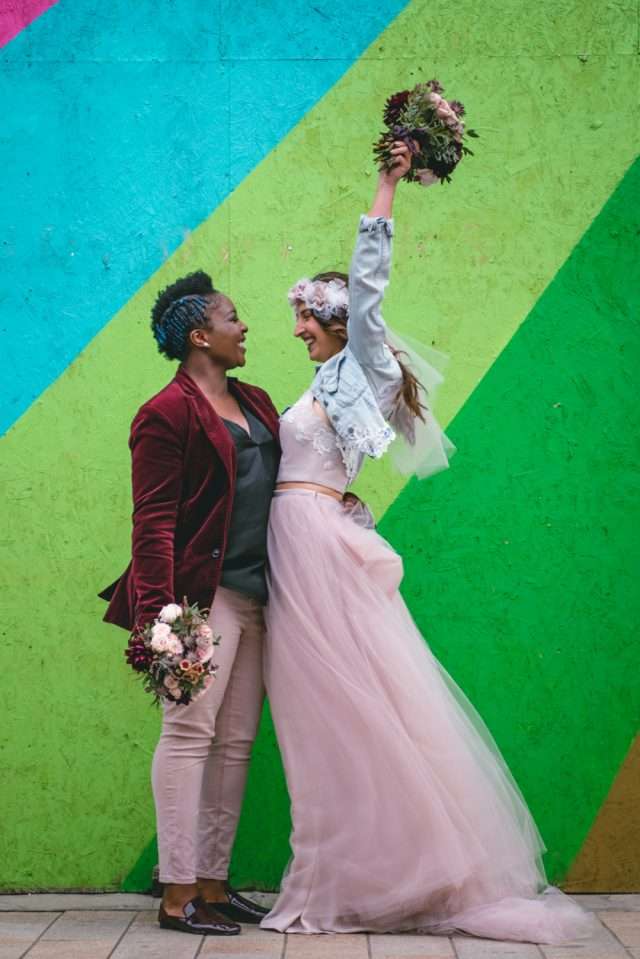 Photographer Becki McPhillips of All You Need is Love Photography explained the inspiration and theme behind the shoot: “I fell in love with the colour and creative buzz of Humber Street, in Hull. The area has been transformed into a modern space for the city’s innovators and art lovers to hang out. It was screaming out for a photo shoot. Our theme focused on the bold, beautiful and bright colours of city life – perfectly reflecting the vibrancy of the area. On the day, we had no plan; we rocked up as group and followed our creative eye, spotting weird and wonderful locations. My number one rule with any couple I shoot is to have fun, be flirty, fabulous and fearless. The photos will rock.” 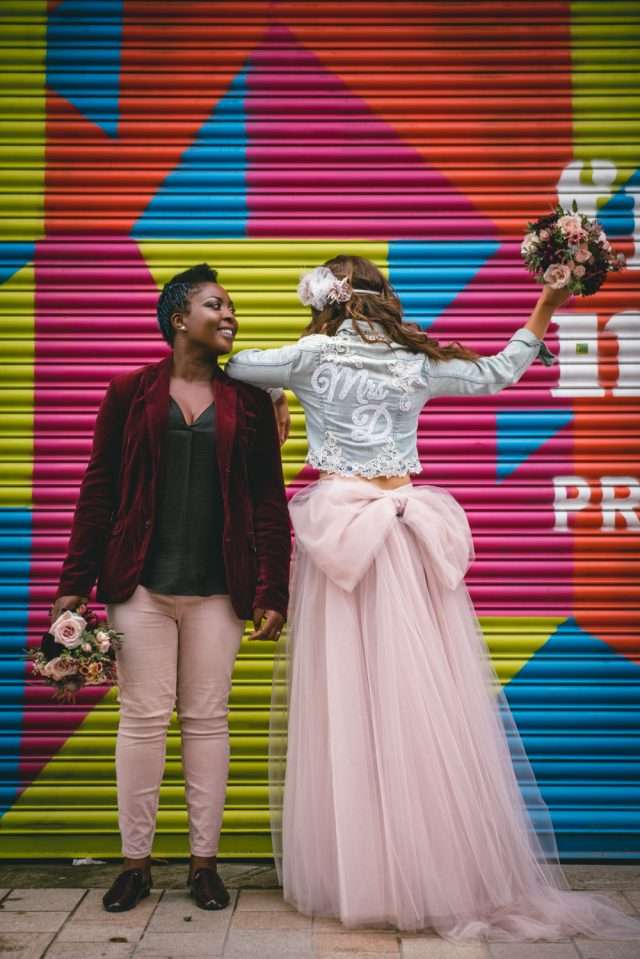 The stunning dress and headband were made by Once Upon a Dress. “We decided to name the dress Heather because the collection is based on autumnal colours and florals. A nice coincidence was that the model was called Heather, too! The dress is made from ‘Vintage Rose’ tulle, and the crêpe was ‘Dusky Rose’ with rose floral appliqués embroidered with silver thread. The denim jacket is our new customisation project for our brides to have a modern take on their wedding day, which is also a bit of fun for their photographs, and something nice to keep afterwards to wear again.” 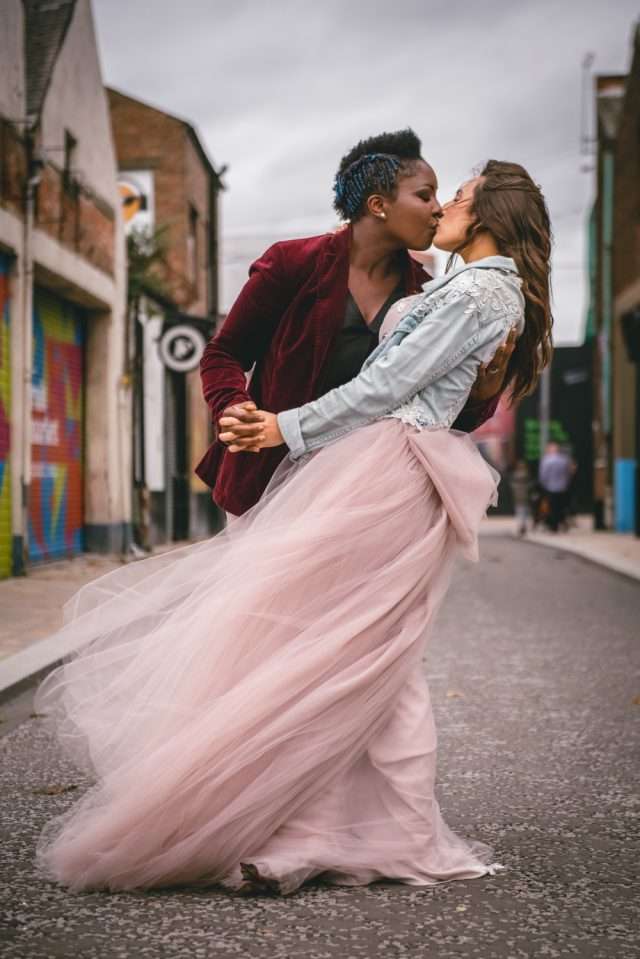 Along with the city streets, the team took full advantage of the edgy and modern look of new art café and cocktail bar The Brain Jar, which would be bang on for your wedding reception if this shoot is your vibe. As Becki says, “I want couples to go out and set the streets alight on their wedding day. Celebrate the city you live in. OK, so forest weddings are pretty cool, and green backdrops are gorgeous, but so are bricks and spray-paint. Get urban and arty.” 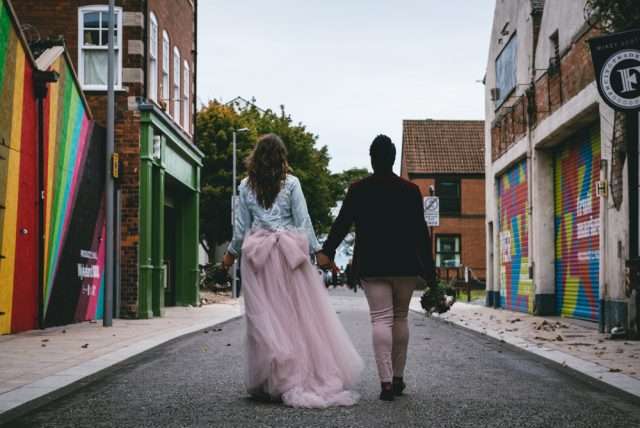 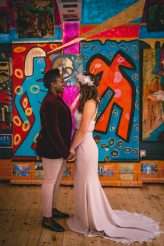 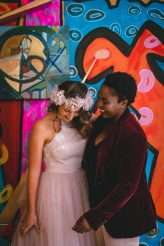 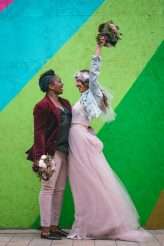 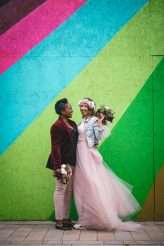 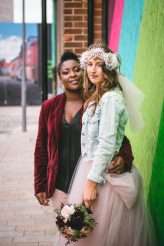 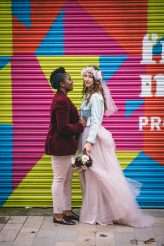 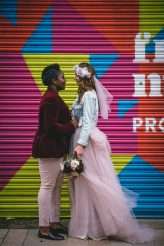 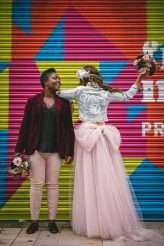 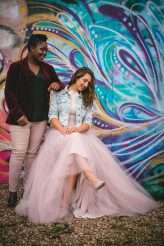 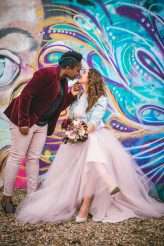 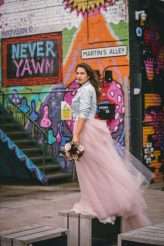 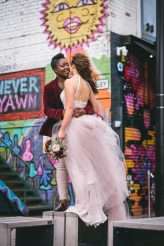 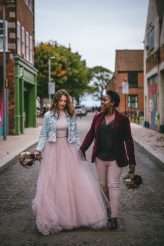 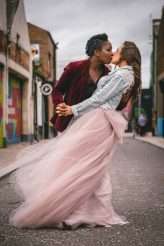 Coming across the most amazingly colourful house by chance one day, wedding photographer Shannon Collins dreamed of being able to do a shoot there. Well fate stepped in, making it a possibility, so she knew she had to make it extra magical! "Last year, I was photographing a couple in Philadelphia for an engagement shoot", wrote Shannon. "On my way home, a few minutes from the location, I drove past a lovely yellow house with tons of pink flamingos scattered across the lawn. I screeched my brakes and drove in reverse so I could capture a quick snapshot of the house. It instantly reminded me of the John Waters film, 'Pink Flamingos' and made me smile."

Acceptable in the 80s…

The 80s isn't a wedding theme we see a lot of. I guess because many of us have scars from the highly flammable, putrid peach bridesmaids dresses we were forced to wear throughout our childhoods... however a modern update is in order IMHO! Which is why I loved this shoot, submitted by wedding photographer Michelle McGreevy-Squier. Not only did the team take iconic 80s motifs and run with it, but they uses same-sex couples as the stars. Stylist & florist David Garcia of Statue of Design was the driving force behind the shoot and the one who came up with the initial concept, "The idea is based on the concept of equality. So much of the wedding industry is focused and targeted to straight couples. But I want my current clients, and my potential ones, to know that I am a floral designer for everyone. There is a huge market for GLBTQI couples, but we aren’t reaching them. I want to change that."

Who says gritty and urban can't also be pretty and colourful?! Not this girl! Which is why I completely love this rainbow-hued shoot sent over by LeeYen of Loblee Photography. Shot in Salt Lake City, these dreamy images have really brightened my morning!