I was trying to figure out how to best start 2018 with a BANG, wondering what would be the perfect post that would start as we mean to go on for the year ahead… And then I laid eyes on Suzi and Ivan’s fantasy, fairytale and UNICORN THEMED WEDDING and the decision was basically made for me. This has to be one of the coolest weddings I’ve seen in a long time! They got tattoos, the bride wore a floral purple dress and they even a real life unicorn for goodness sake. Oh and very the best part? The whole wedding only cost $1500 (AUD). Truly incredible. 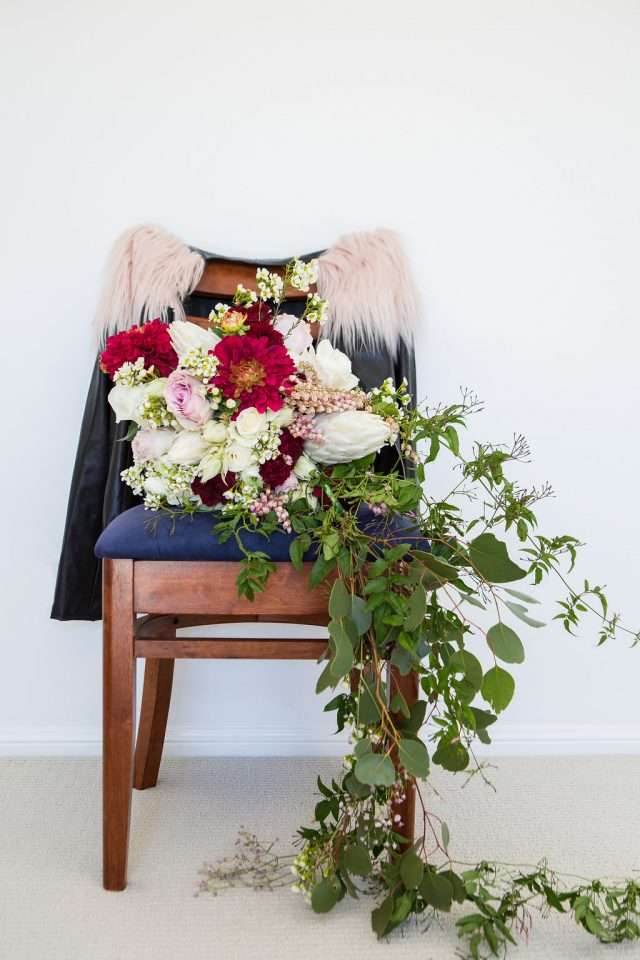 They were married in Glen Innes, New South Wales in August. They met when the bride moved to the area. “I had moved to Glen Innes from the city and was hating country life”, she explained. “I figured since I don’t like cowboys, I’d never find someone in this tiny town. After a year living here, I was asked by the elders to be the new church door greeter since I ‘look cool’. So that first Sunday night I was merrily shaking hands and welcoming people to the service when I spotted a golden Adonis across the car park heading my way! I mumbled a hello through my drool and then turned to who was next to me and said ‘Dibbs! That one’s mine!’ Six months later he finally came around and decided to ask me out haha!” 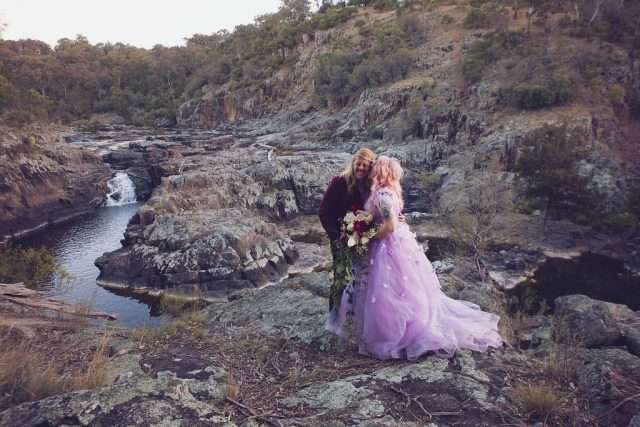 The wedding was inspired by the bride’s love of pastels. “The theme was originally supposed to be gothic glam with a wee-splodge of boho but I kept finding fun unicorn stuff so it sort of evolved into a pastel-goth fairytale explosion! I live life in a fairytale – I even have silicon elf implants in my ears! So having unicorns and enchanted forests at the wedding was obvious for us.”

“We also had our live unicorn for pictures which was epic. Guests were amazed at both venues, the reception being right on top of a waterfall that is lit up at night. We had a tattoo artist inking people at the reception and surprised guests with a fire-twirling demo later in the night too.” 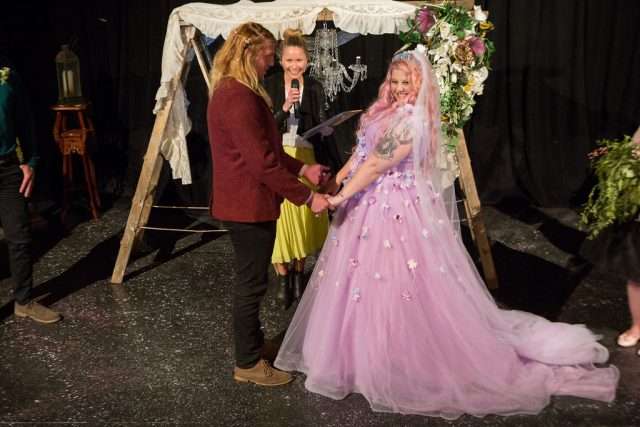 The ceremony was held in an old chapel that has been converted into a cinema. “I walked down the aisle to The Used, Smother Me”, she said. “During our signing we had a young girl sing Katy Perry’s ET on acoustic which was gorgeous. We actually hid our rings under two chairs so everyone had to scramble around to see who had them and then present them to us. That was really fun.” 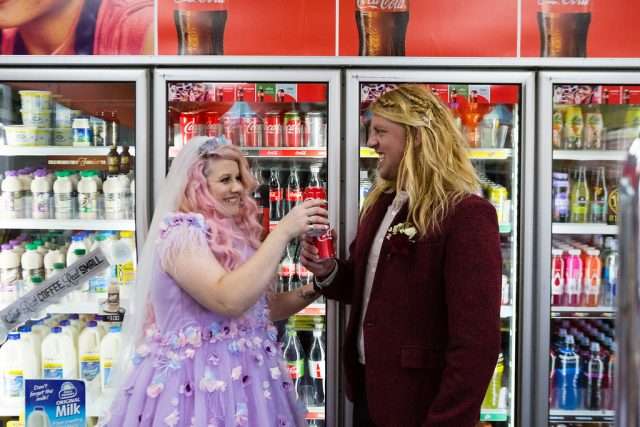 After the ceremony, they walked to their local store to buy some drinks! “Ivan and I are addicted to $1 cokes from our local video store. We get one almost every day! So the first thing we did as man and wife was to walk down the street in full get-up and purchase cans of coke! We caused a small scene. A group of teenagers were lingering outside staring at me so I asked them to open my can for me since I had fancy nails on. They loved it! It was hilarious. Since getting our pictures back we sent all the store ones to the shop and they in turn showed their Coke rep who gave Ivan and me limited edition, not-for-sale Love cans! Score!!” 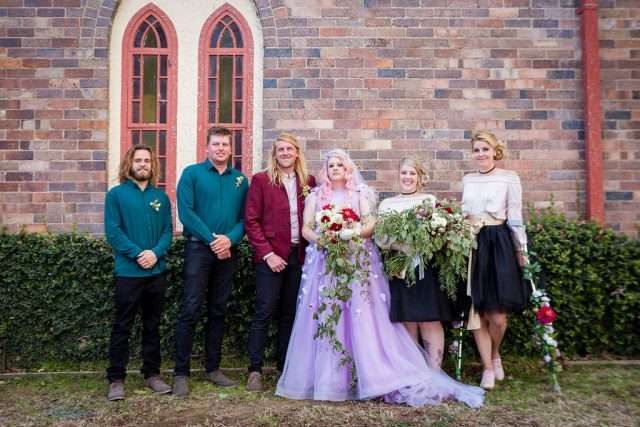 To keep costs down they DIYed almost everything. “All of the outfits were so cheap as they came from China and were surprisingly amazing quality. My dress including alterations and postage was only about $300! I made all the invitations, decorations, signage, guest book, ceremony arbour, unicorn horn for the horse…. Soooo much DIY! Also, being a florist I did my own flowers. The most expensive thing was our photography as they were the most important vendor of the day for us. Photos are what you keep and look back on. I’ve worked with Phoebe before on some collaborative shoots and love her vision, her style, and her in general, so we booked her immediately!” 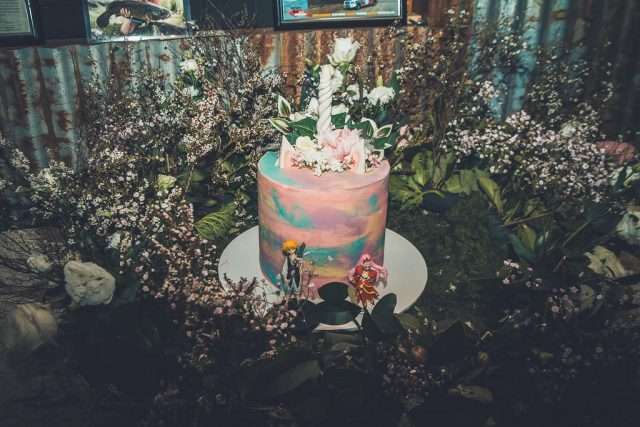 “I loved planning our wedding”, she concluded. “The whole process was so much fun! I always organise massive birthday parties so doing a wedding was like a drug for me! I went nuts with it. Our advice for future brides and grooms is to just do you! Don’t focus on traditions and what you think a wedding should look like. Be yourself and change things up! Surprise people! Make statements and give the folks something to talk about!” 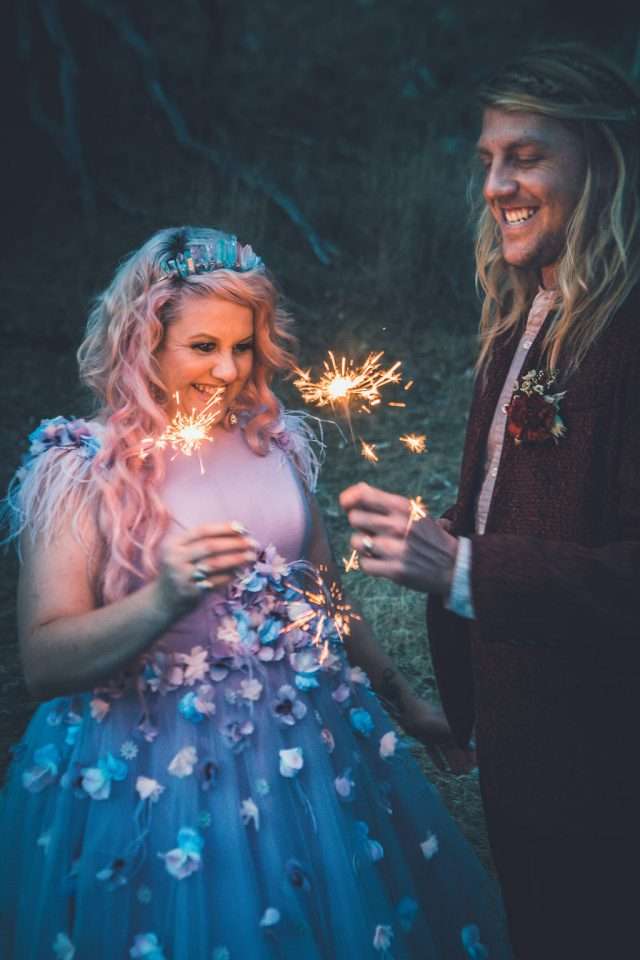 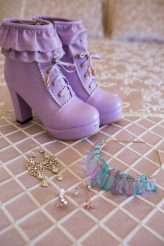 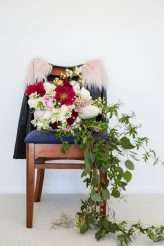 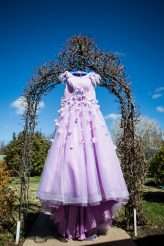 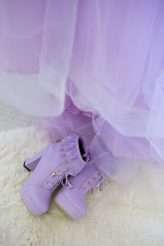 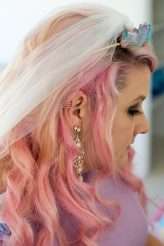 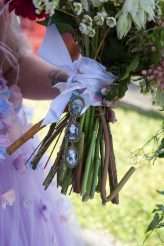 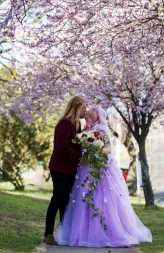 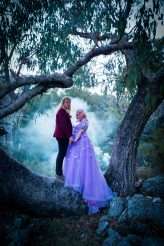 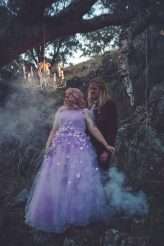 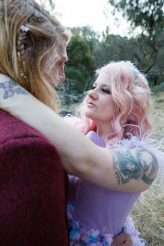 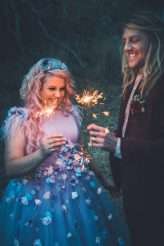 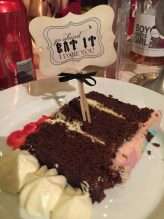