Jem and Dom were married in June at Mulberry Lodge in Little Mongeham, the site of a festival they’d been to and loved. Their budget was just £4500 but with DIY catering, a homemade wedding dress and lots of help from friends and family they were able to create the most beautiful day.

“The inspiration for our wedding was each other, the things we like, colours, textures, artwork and the venue itself”, began the bride. “We essentially wanted a ‘Jemdomfest’ with music, dancing and fun. I wasn’t interested in impressing anyone, nor was Dom. it was about having fun, and hopefully that our guests would also have fun.” 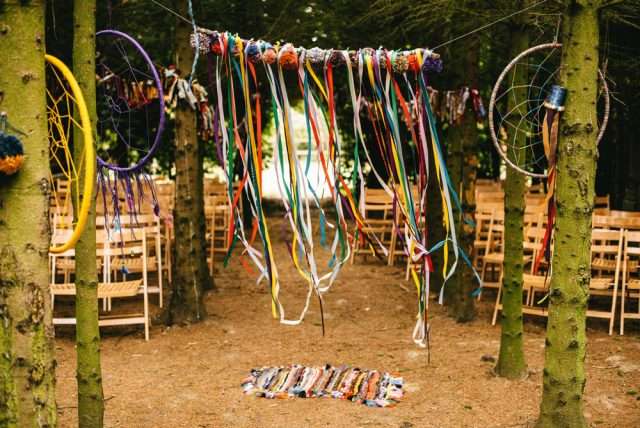 Of their limited budget, their single biggest expense was the photos. “Photography was by far our biggest expense but absolutely worth it. Not only is Alex a great photographer, he also loves his job and this really shines through. He was a sea of calm in the barn when me, my bridesmaids and my mum were scurrying around getting ready, he even helped us with last minute button hole making!” 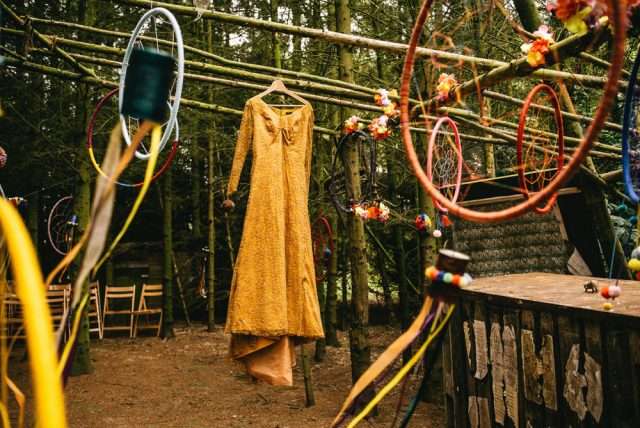 The venue was integral to the style and ambiance of the wedding. “The venue is actually some privately owned land, that we knew about because they are home to the annual Smugglers records festival, a great little festival of folk and world music that me and Dom had been to a few times. We really liked the setting, a beautiful expanse of land in the middle of the countryside, with a small Christmas tree forest, leading to an open area, which connects to a woodland area. We didn’t even know if it was possible to hire the land but through a friend of a friend we got in touch with the lady who runs the site and she was kind enough to let us use it. We had our ceremony in the Christmas tree forest which was nice because not only do we love being outdoors and immersed in nature but I LOVE Christmas!” 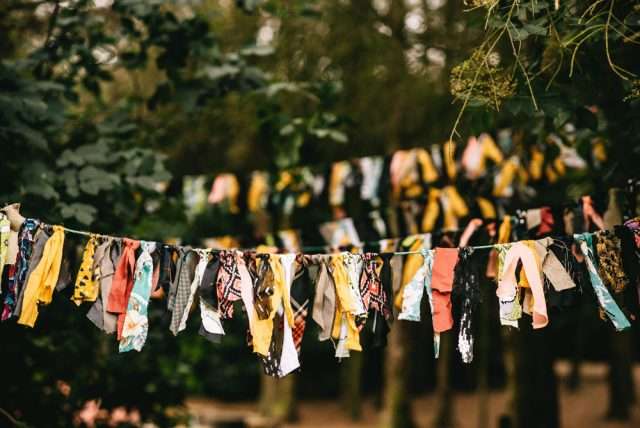 They had a legal ceremony a few days beforehand which meant they could do exactly what they wanted on the wedding day. They hired Vicky ‘The Rev Trev’ Ramirez to conducted their outdoor, handfasting. “As soon as we got engaged we knew we wanted our friend Vicky to do our ceremony. She spent ages coming up with a wedding ceremony that reflected us and our relationship, and even perfected one handed handfasting skills. It was nice to be married by someone we knew and it gave us the opportunity to create a ceremony that was unique to us.” 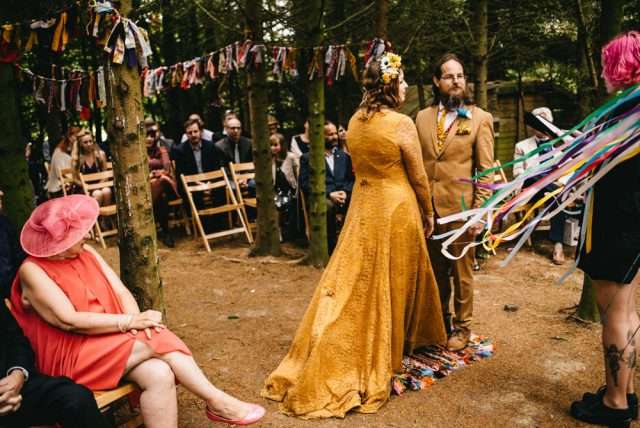 “The ceremony space was decorated with giant dream catchers which me and my friends made in the year prior to the wedding. I also made a ribbon and pompom curtain for behind us as a backdrop for the ceremony, out of a large branch we got on one of our walks around the local woods. The ceremony space is a natural clearing in the wood and also had remnants of the festival in situ – an absinthe bar, leather chesterfield sofas and a piano graveyard! It is such a beautiful space already we didn’t need to do too much. We also hired giant flags for the land in lots of colours which supported 100s of metres of festoon lighting which looked magical as the sun set. There were fairy lights EVERYWHERE! Which was exactly what I wanted.” 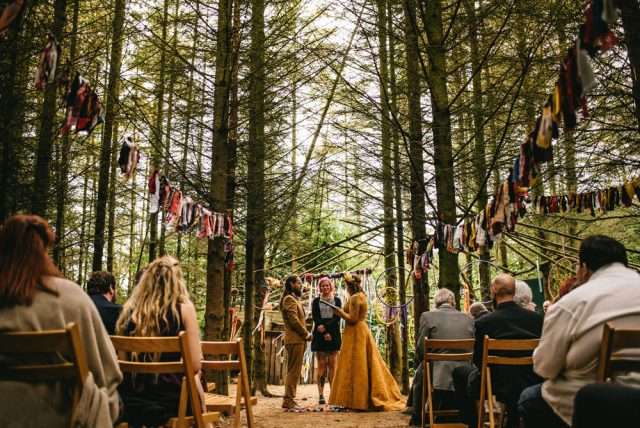 “For the reception we hired a marquee”, she continued. “We wanted more of a family camping/ festival with friends vibe, while there are some beautiful tipis available to hire, we just did not have the kind of money required. We went for a bog standard fete marquee but it saved us literally thousands of pounds, and honestly, it is the people inside a place that make it wonderful.” 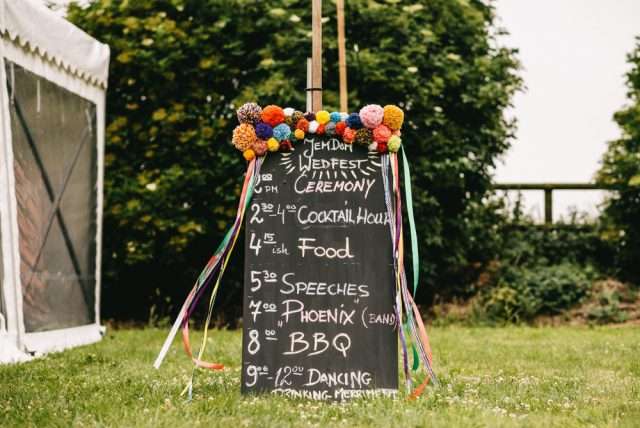 “We decorated the marquee with mismatched tablecloths gathered on all our trips to charity shops. We also decorated glass jars, tin cans and old bottles to hold flowers in. we also had a lot of ‘bits and bob’s’: Our favourite ornaments and photos of our beloved cats/ furbabies dotted around the woods. We made 100s of metres of rag bunting which went all through the woods and the marquee, as well as some awesome rainbow flags leftover from Brighton Pride. Pom poms were a big feature too. Everyone that came into our home in the lead up to the wedding was given the task of making at least one pom pom. I was given bags of them by friends and even a few of my patients from work made some. We weren’t massively bothered about things being matchy matchy, we wanted lots of fun colours, textures and shapes.” 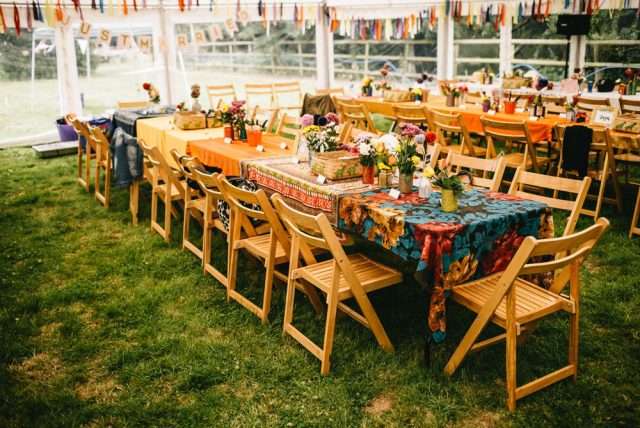 The bride knew she didn’t want to wear white and opted for a stunning yellow gown which was handmade by her mother-in-law! “I am not a white dress sort of girl”, she explained. “I had looked everywhere for a mustard yellow dress before initially mentioning the possibility of making a dress to my mother-in-law who I knew had made her own wedding dress. Luckily for me she was keen to make it, and we set about trying to find the *exact* shade of yellow I was after. Numerous trips to Goldhawk Lane later we had meters of raw silk, lace imported from America and a 90s dress pattern that we adapted to suit my tastes. We spent only £200 on the fabric so making it ourselves saved buttloads. The dress turned out exactly how I pictured it in my head, I felt like Maid Marion running through the woods and I can’t wait to find an excuse to wear it again.” 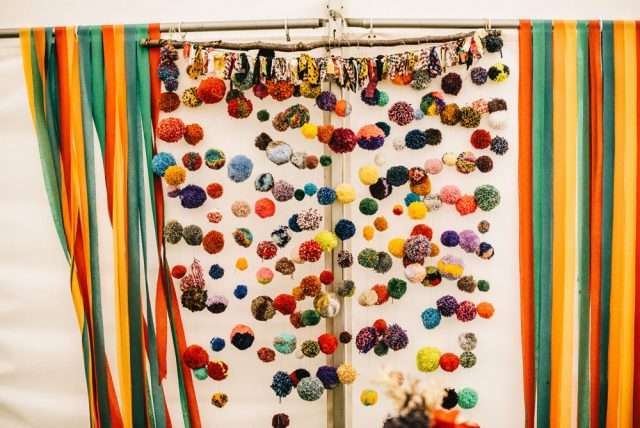 One of the other things they really saved on was flowers, as they didn’t really feel the need to spend lots of time or money on them. “Flowers were never important to us. The setting was beautiful anyway surrounded by trees and flowers we didn’t need to add much. I also find the idea of paying hundreds of pounds for something that will be dead the next day obscene. So, I decided to go to Aldi the day before my wedding with my sister and buy ALL their flowers. We just took what they had and ferried it over to the venue. They spent the night in the shower until the next morning when my amazing bridesmaids trimmed them, shoved them in every jar, can and bottle and made their bouquets and buttonholes for the men. It was only on the morning of the wedding that we realised we had forgotten pins for the buttonholes, so they all ended up being held in place with hair grips! I bought my bouquet from Tesco, along with a bottle of Champagne, on the way to the wedding. My bridesmaids wrapped it in an offcut from the bridesmaid dresses. I got bored of holding it fairly quickly – and eventually just ended up throwing it to a crowd of women anyway. So was glad to have spent less than £10 on it!” 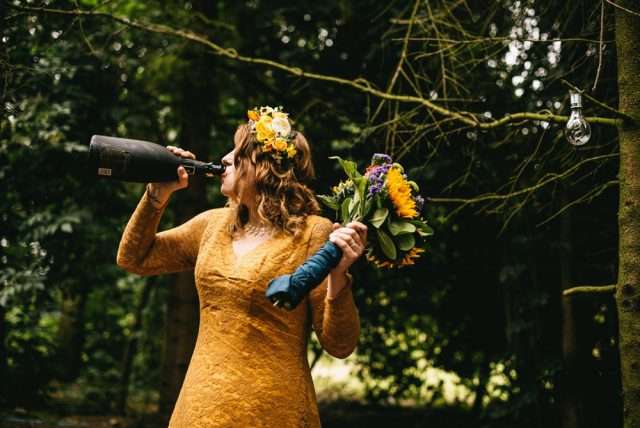 They also massively saved on catering by doing it all themselves! “Food was always going to be a minefield for us. We are both vegetarian and I am also gluten free due to a health condition. We also had guests who were vegan, vegetarian, gluten free and had nut allergies. We also did not want to spend £3000 on a dry mushroom risotto (seriously wedding caterers come up with new vegetarian options). Three months before the wedding I realised we had no caterer yet, and money was tight. We decided to picnic baskets for our day guests which we stuffed with cheese, charcuterie, crackers, breads and chutney – one of which we made ourselves. It was an easy way to ensure everyone’s dietary needs were met – plus – cheese and crackers is one of our favourite meals ever. For the evening I spoke to my friend and bridesmaid Linzi who went away and with her dad decided they would run a BBQ, different options for all different needs and at a really ludicrously good price as it was just a matter of paying for ingredients. Linzi and her dad made the most amazing food that suited everyone.” 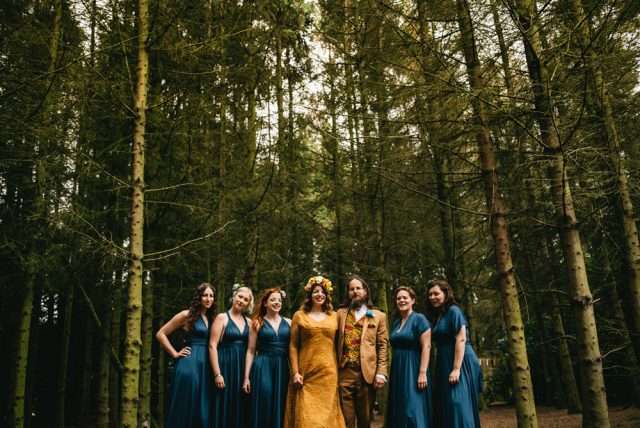 In the end, the most important thing to both Jem and Dom was that their wedding felt like them. They made choices that made them both happy, regardless of what anyone else thought or said. ” I didn’t think much of it but I got a lot of weird looks when I said I wanted a yellow dress”, Jem remembers,” and even stranger looks when they found out it was being handmade. However a lot of people said that the wedding was a true reflection of us. We didn’t go in for any of the ‘You have to have X/ you have to do Y’ mentality and just tried to organise a day that truly reflected us and our relationship. It doesn’t matter that there were plastic cups, or paper plates or no first dance, nobody cared or noticed. I don’t know if there are any other weddings out there that featured a RuPaul disco in the woods with a bride in a sequin cape either!” 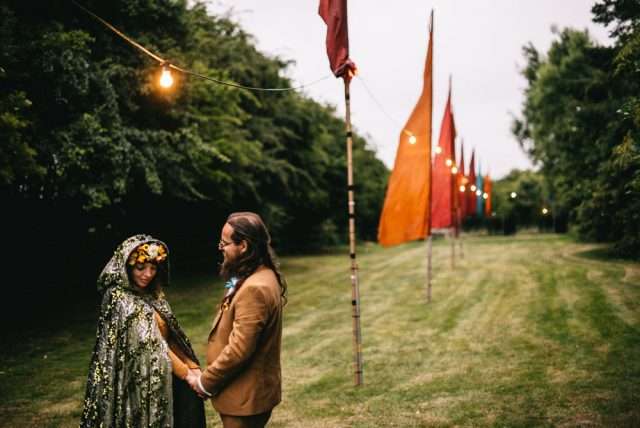 “My advice to other couples would be do what makes you happy”, she concluded, “whether that’s a hotel wedding or a wedding on the moon! Your decisions aren’t justifiable to anyone but yourself and ultimately it’s your opportunity to throw the biggest, raddest party for everyone you love. Also, never forget, it’s just one day, its not worth getting super stressed over.” 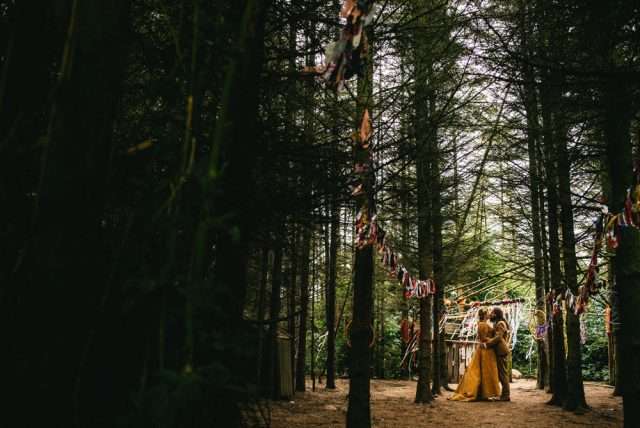 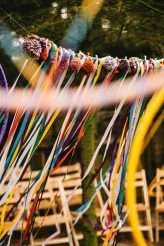 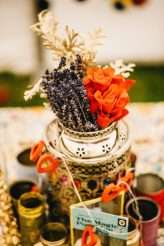 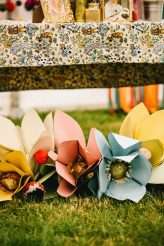 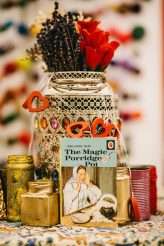 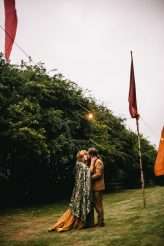