Seb and Liam’s Easter weekend wedding was inspired by music, fashion, the 1980s and their love of performing. They wanted the opportunity show off and dress up. “Wen feel like the bride often gets all the fun at straight wedding and we wanted to be in the spotlight!” they laughed, “We thought it would be great for our guests to be dressed in an unusual way so that they felt special and different.” 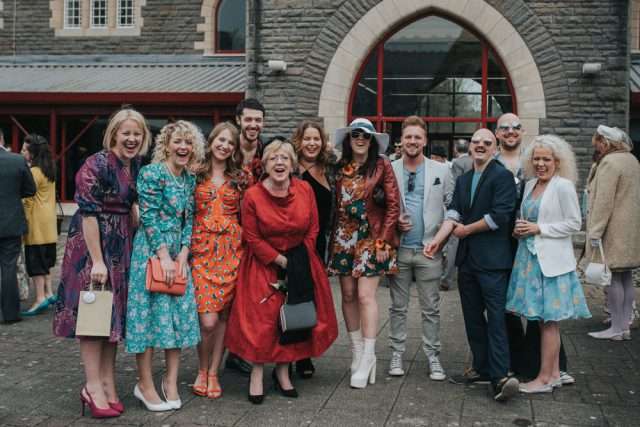 “The theme was ‘come dressed in the iconic vintage fashions of the decade you were born’. We had people ranging from the 1920s to the 1990s. People were encouraged to go vintage (and not fancy dress shop style). Everything that we love was encompassed in the theme – dressing up, our taste for retro music, and an opportunity to show off.” 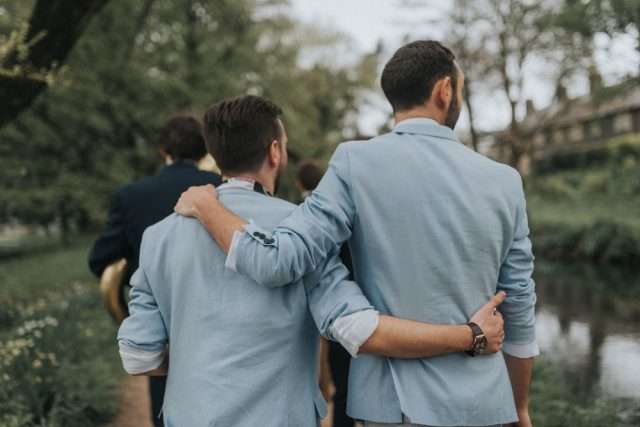 Both boys wore three different outfits for the day! “We each had a ‘ceremony look’, a ‘dinner look’ and a ‘party look’”, they said. “They were all 80s inspired vintage and it was the most fun putting them all together by hunting online and through vintage shops.”

They also had so many unique and personal touches. Their entertainment was together a New Orleans style jazz band to reflect the fact that their first holiday together was to New Orleans. They handmade their invitations and instead of flowers they had plants on the tables. The food was also fully vegetarian. 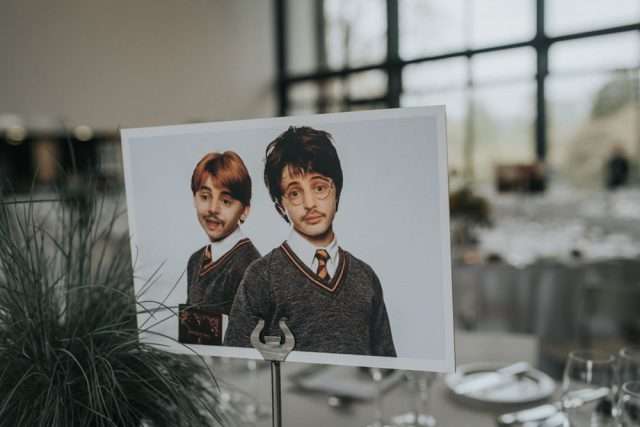 “The tables were named after famous couples and people from popular culture throughout the decades that we both love. We took iconic photos of these people and photoshopped our own faces in their place and then had them printed, one per table… for example, Kylie and Jason, Princess Diana and Charles, David Bowie and Jennifer Connelly (Labyrinth) etc. We were playing up to people always saying that we looked similar – and wondered whether people would be able to tell who was who! We wanted to do something silly and playful.” 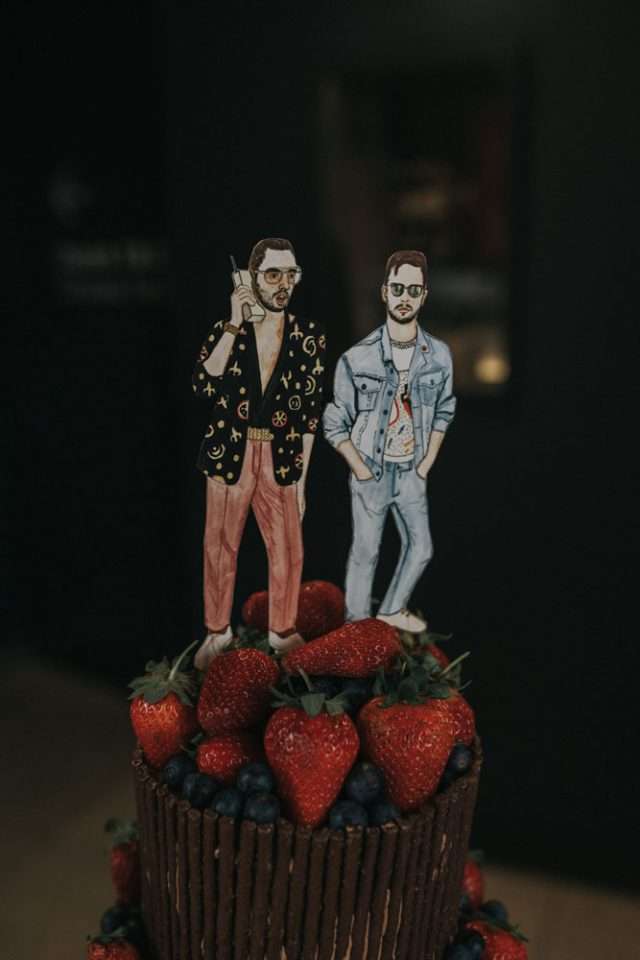 “Alongside the photos were different plants with battery-powered fairy lights. Handmade rainbow tissue paper tassels hung from the balcony and on the terrace and there was a hanging origami rainbow curtain in the entrance to the venue (made by Liam’s mum).” 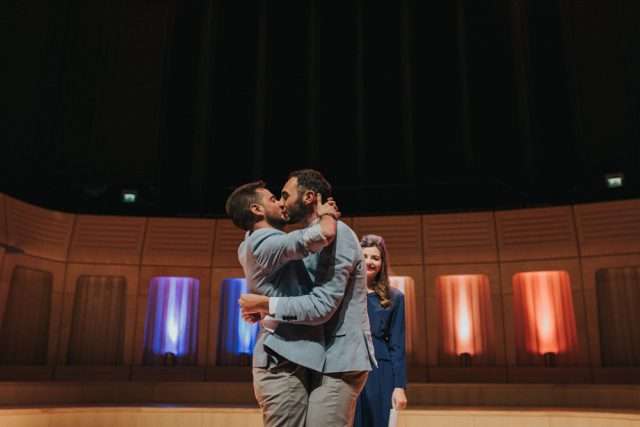 “We felt so liberated by there being so few traditions for a gay wedding”, they continued, “and we questioned what was important to us. This allowed us to really follow exactly what we found fun and exuberant. We had our close friend officiate the ceremony  (we were legally married a few days before), 12 different karaoke singers performing in the evening and three outfit changes where we appeared on the balcony to ‘reveal’ them each time! We had a rainbow theme too, but it wasn’t over the top and our guests loved the dress code.” 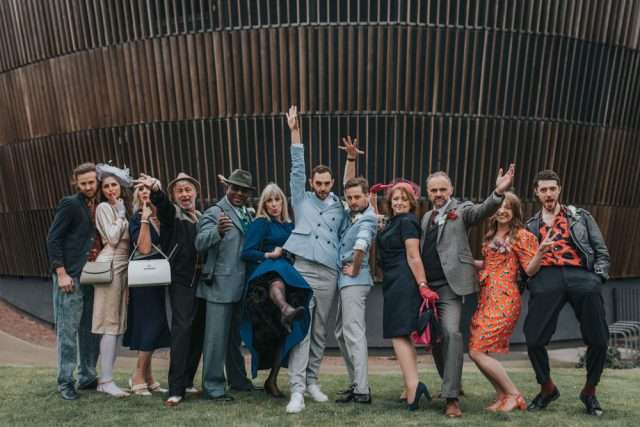 They had a large guest list (170 people!) so food and drink was their biggest expense, however they saved money by ignoring conventions and not having things just because you ‘should’. “We refused to subscribe to expectations of what you should have at a wedding. We had had no wedding favours, no best men/bridesmaids (too much politics, we didn’t want to favour any friends/family over others), we didn’t buy expensive clothing and we made our own decorations, invites and table plan. We had no flowers, just plants from garden centre. We also had no DJ (we used Spotify as are so opinionated with music!) and had our friends singing instead of a band in the evening.” 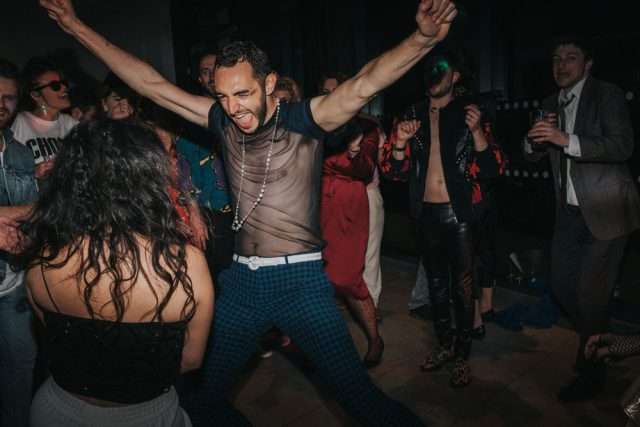 “The best thing about planning our wedding was the building anticipation of all that we had planned”, they concluded. “We loved hearing people discussing what vintage clothes they were buying and really getting behind our theme. We also really saw each other’s strengths shine through – Liam as the creative lead and Seb as the organised lead! There’s nothing we disliked about planning the wedding and there’s nothing we would change about it now. We didn’t hold back and so we have no regrets!” 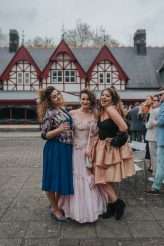 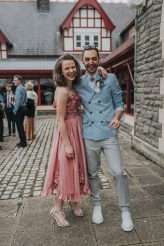 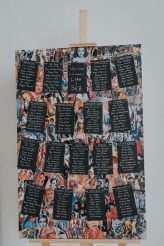 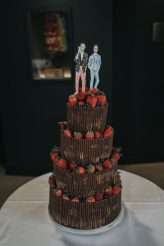 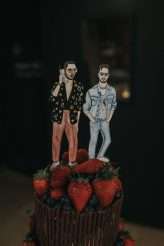 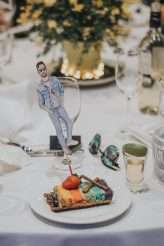