Morgan and Stu both love autumn so they knew they wanted to incorporate autumnal colours and flowers in their wedding. Morgan also LOVES Halloween so they decided their theme should be ‘ Til Death Do Us Part’.

“I LOVE HALLOWEEN!” began Morgan, “What makes Stu such a special person is that, yes he does like Halloween, but he knows how much I love it and he lets me go with it! He didn’t want our wedding decor to be too Halloween party with blood and guts but just to stick true to the ‘Til Death’ theme.” 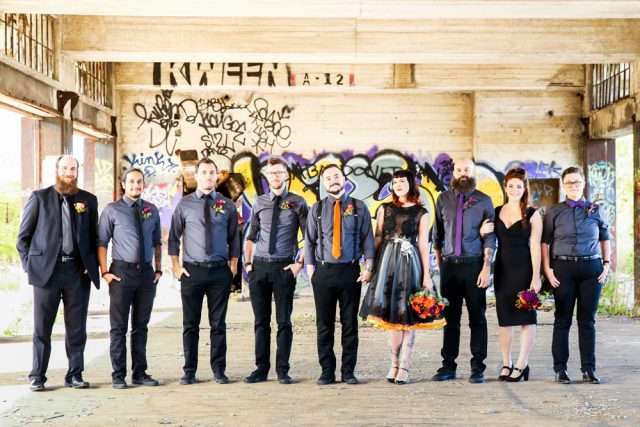 “We just tried to make everything about us. As selfish as that might sound, we wanted to celebrate us publicly (and legally) joining our lives forever. We didn’t try to think about if something was considered traditional or alternative. We felt pretty strongly that we would not be married in a church by a priest or pastor because neither one of us is religious. We picked our own readings for the ceremony, our own ‘I do’s’ (which came from a line from the movie, Moulin Rouge) and our own vows. Despite my feminist views, my dad walked me down the aisle but it was more about having him a part of our day. My wedding dress was mostly black and my ring is a black pearl with two skulls on either side. Oh and I had a Man of Honour instead of a Maid of Honour!” 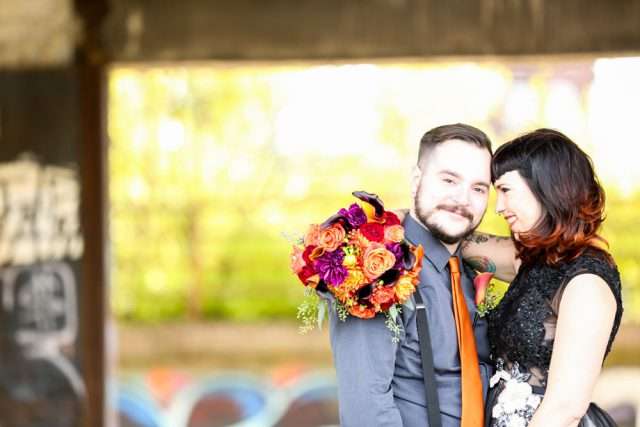 They kept their ceremony small with only about 30 people including the wedding party and only fed those who came to the ceremony. “Our ceremony was short, sweet, small, and non-denominational! It went really really well and I cried like a little bitty baby. I wrapped my flowers in lace from my mom’s veil and my I walked down the aisle to Baby, I Love You by The Ramones and walked out to Friday I’m in Love by The Cure. We got married on a Friday so we thought it was pretty fitting! It all seems like such a blur now but it went perfectly and our friend David did such an amazing job officiating. We had just our immediate family plus grandmas on Stu’s side with the rest of the guests consisting of our closest friends: our friends are also family to us and we thought it was really important to have them part of our intimate ceremony.” 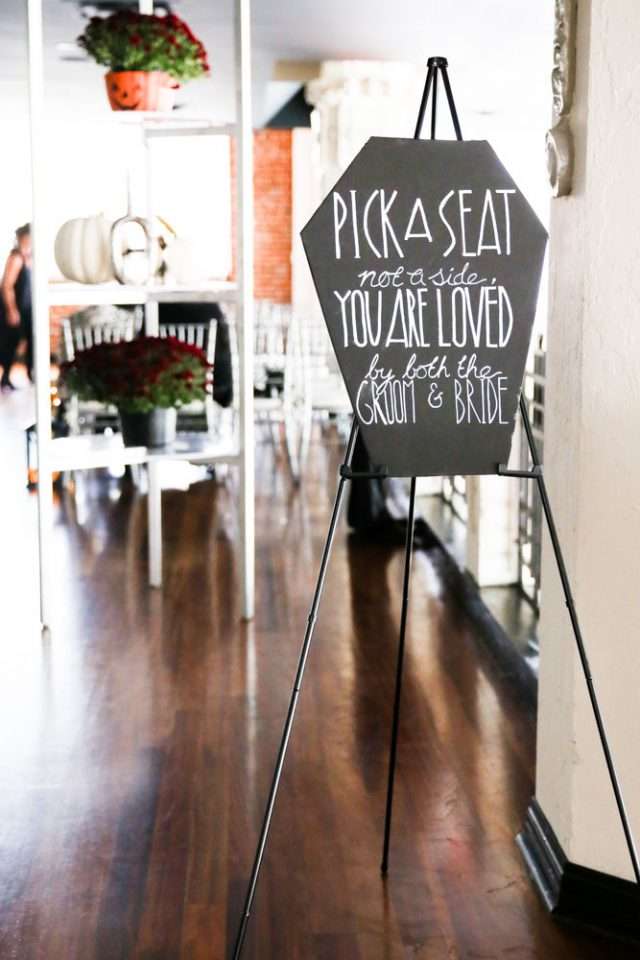 Guests who came only to the reception were treated to an open bar, a dessert bar, and a late night snack which was hot wings and tiny pizzas (in tiny pizza boxes!). “The reception was a blast and went exactly how we wanted. The 1920s jazz and swing band were perfect and everyone loved the PhotoBus. We also got to stay in a great hotel the night before and the night of our wedding which had a Vincent Price suite! That just made everything so perfect.” 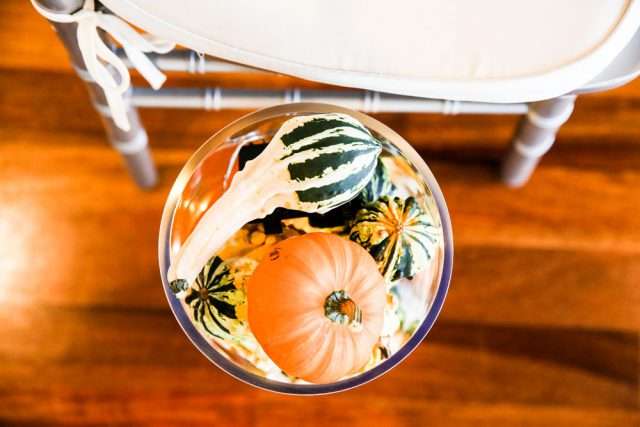 Unfortunately they went over their wedding budget towards the end. “ We wish we’d known how quickly things would add up near the end. We kind of had this mentality of ‘we only get one day so let’s splurge on that band or that photobus…’ We thought we were inside our budget but then decor added up, we ended up adding flowers for people that we didn’t think needed a flower, and TIPS! (But our vendors deserved it because they worked so incredibly hard and made everything so perfect for us.) Also, we had no idea how hard it was to book a hotel block. St. Louis isn’t a huge city so there aren’t a lot of options, then we found out there was a presidential debate that same weekend! That part was probably the worst as no one would give us a straight answer or return our calls. We probably would’ve taken care of those things months earlier had we known how difficult it would be.” 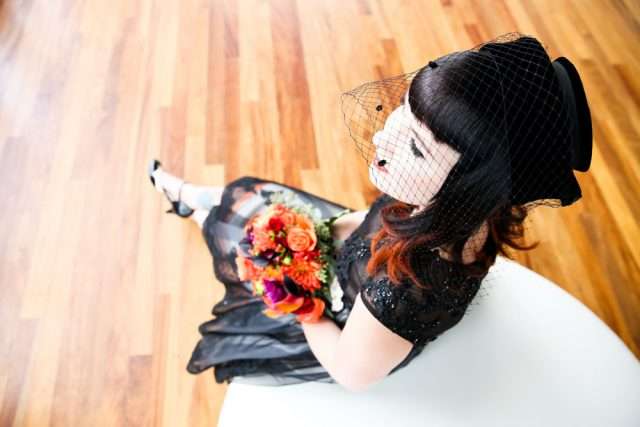 For favours they had Halloween candy in hand printed paper bags, “With help from lots of our friends we printed on the paper bags we used for our Halloween candy favours. Our friend Kseniya made us our card box (which was a huge haunted house!), Stu made a photo booth sign that looked like a Ouija board planchette and a ‘sit wherever you want’ sign that was shaped like a coffin.” 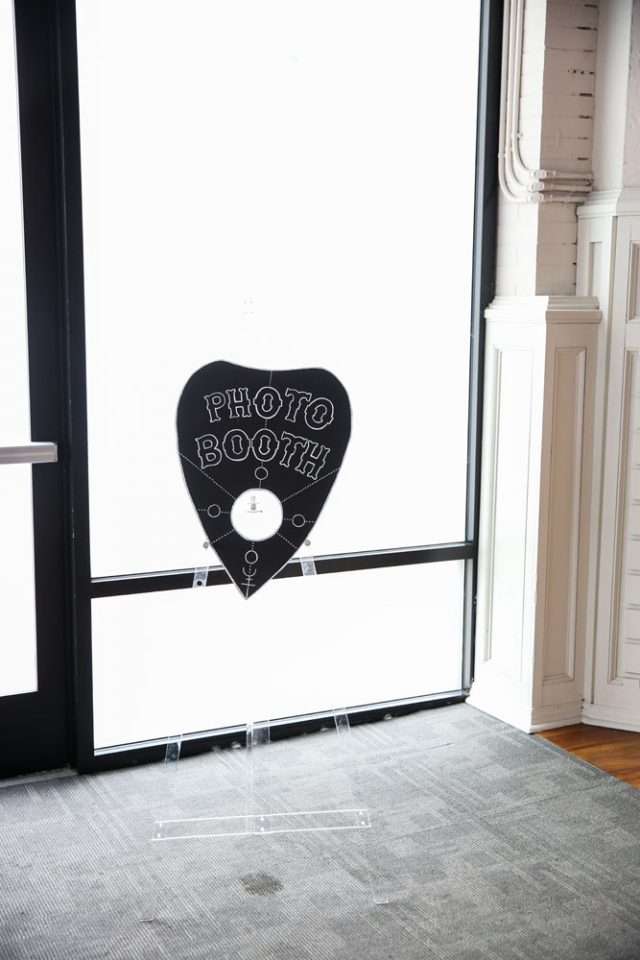 Their biggest expenses were their venue and their photographer. “The venue was just so perfect and they gave us a deal on the ceremony fee since we had so few guests. Stu made the final decision on the venue and he made the right choice. Not only did they cater everything but Sarah, our day of coordinator, was absolutely amazing. We couldn’t have had such a perfect ceremony and reception without her. Our photographer, Michelle, was great and has an awesome, bubbly personality. It was important to us to get the best photos possible on our big day and we chose well as she and her second photographer were awesome to work with!” 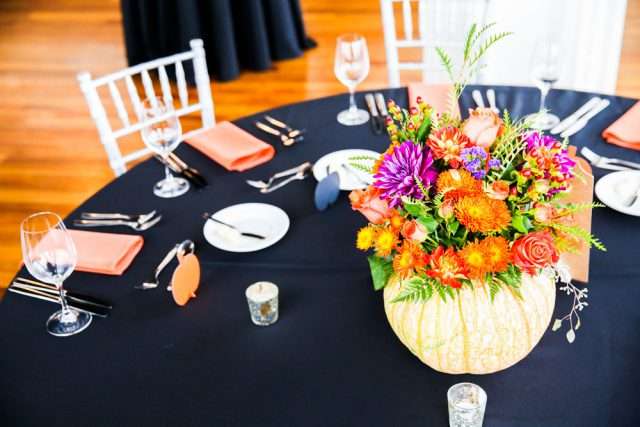 Their biggest saving were actually their outfits, “We seemed to save the most money on our clothes. My dress was under $200, Stu’s pants were from The Gap, and Express had a sale going on the shirts our wedding party wore. We wanted to find things we loved and felt comfortable in but we were more concerned about our venue and everyone having a great time. I LOVED my dress and I felt so lucky that I’d found one so perfect for so little money, as I knew I probably wouldn’t wear my wedding dress again so I didn’t want to spend too much on it.” 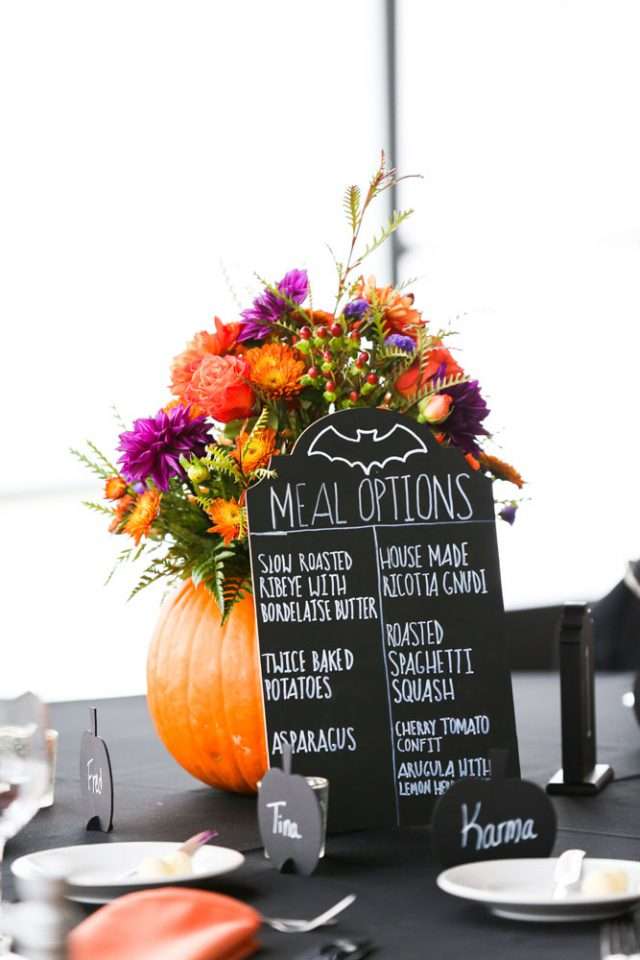 They loved planning their wedding! Especially picking their décor and designing their save the dates together. “We just loved picking out fun decorations from craft stores and making the playlist for our dinner and reception. Anything that we found that seems so uniquely us made us so happy. Rock n Roll Bride magazine was always there with an awesome article to give me a confidence boost, cool ideas, and to remind us that there were other people out there doing their own thing and we could too! Stu and I made our own Save The Dates together and that made us so excited because it was one of the first things we did that was like, ‘ok this is official!’” 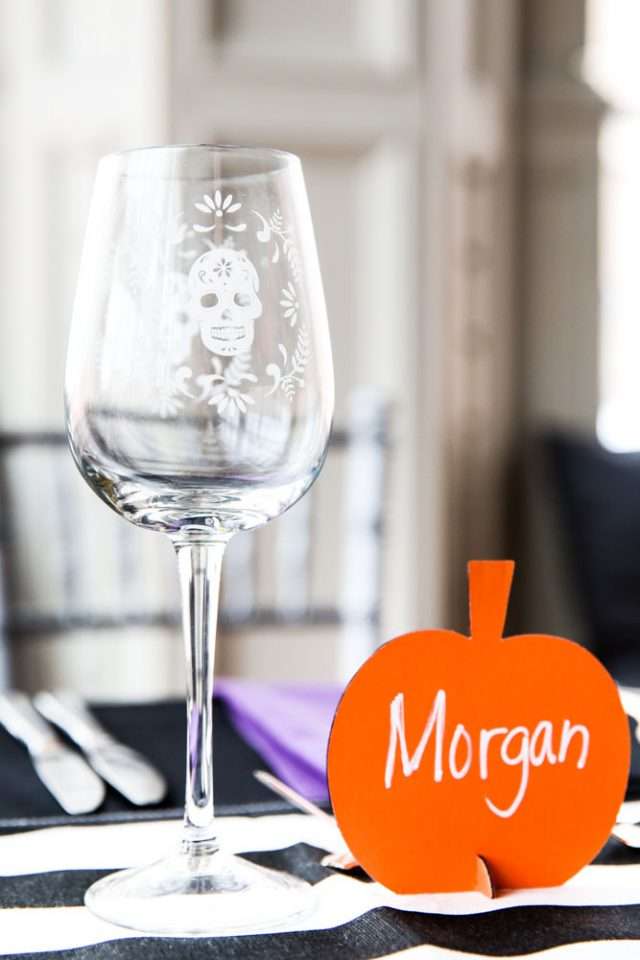 “Sometimes we do think that if we’d just eloped maybe we could’ve avoided some stress and family drama”, she concluded. “We believe a wedding should be about the couple getting married and not about pleasing everyone else. So sometimes we’re annoyed that we had to bend to make things work for others. But our wedding was perfect and when we look back on that day there’s not a thing we would change. We both look back in happiness and in the end what matters is now is that we’re together for the rest of our lives.” 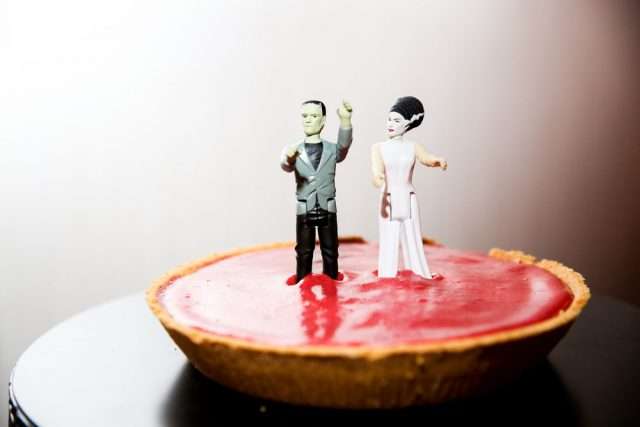 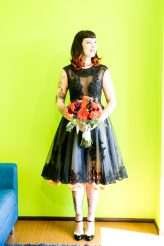 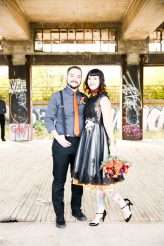 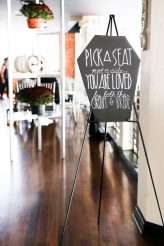 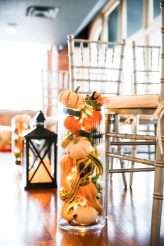 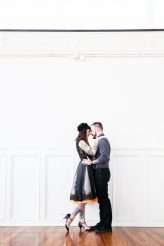 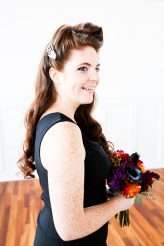 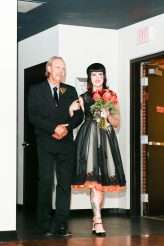 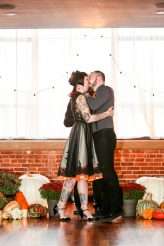 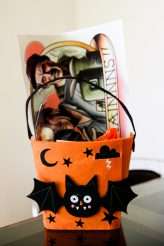 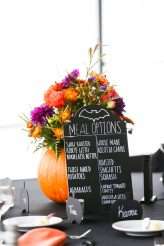 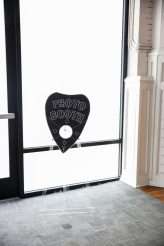 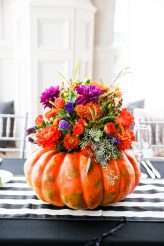 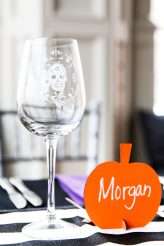 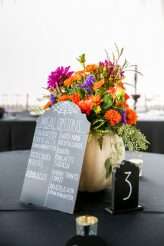 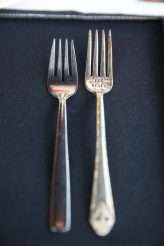 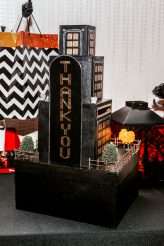