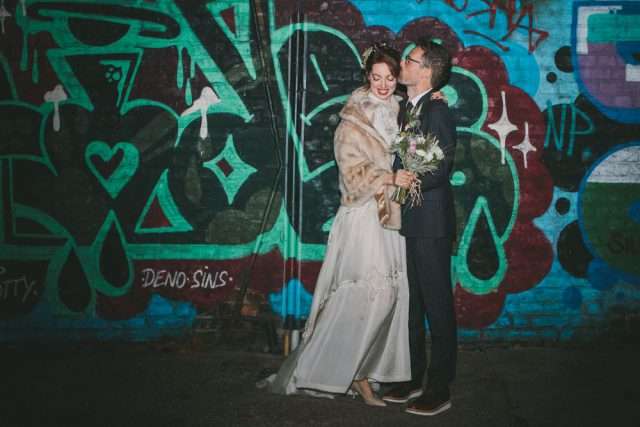 Mel and Tim met when they camped next to each other at Glastonbury and when planning their wedding, their starting point was that they just wanted to have a fun party. They also wanted to avoid anything too formal and ‘wedding-y’. They chose Stour Space in Hackney as their venue as it was relaxed and a little rough around the edges, which they liked. Their wedding was held in the evening, in winter, which further added to the party vibes. 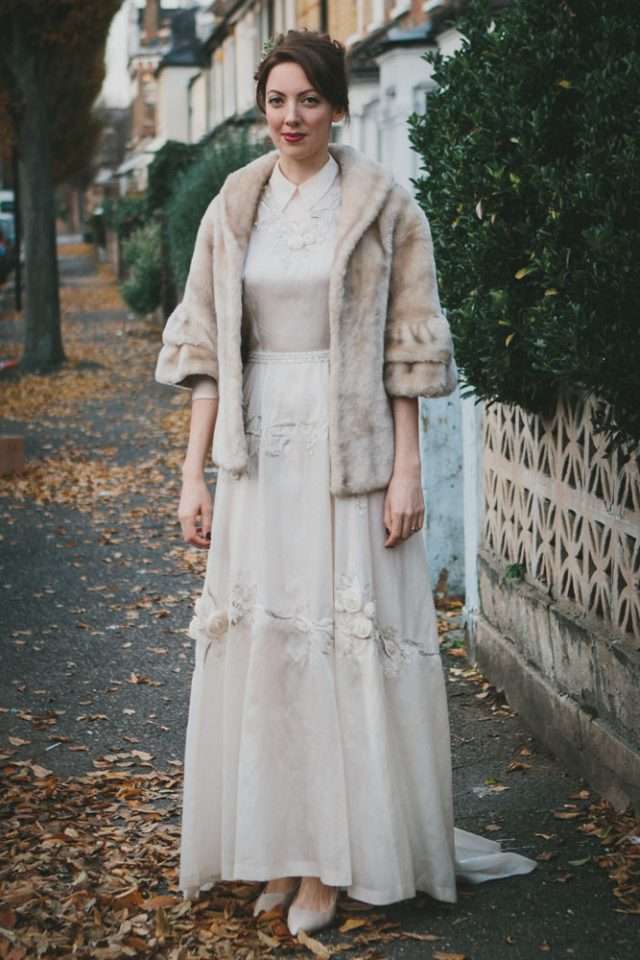 They took inspiration from the 1950s and focused on pastel colours, sequins, kitsch animals and retro typography. Mel explained, “As I had a vintage dress we decided to run with the 50s style. It contrasted well with the sparse, modern venue we’d chosen and stopped it looking too cutesy. We saved endless pictures of 50s fabrics and cocktail menus for inspiration and we were really lucky to have amazing designer friends to bring the theme to life. Gemma created our invitations and little enamel badges, which we gave out as favours. Nat designed all the décor and the dreamy perspex signage; the huge ‘Tim & Mel Say Hi!’ sign now greets people in our hallway!” 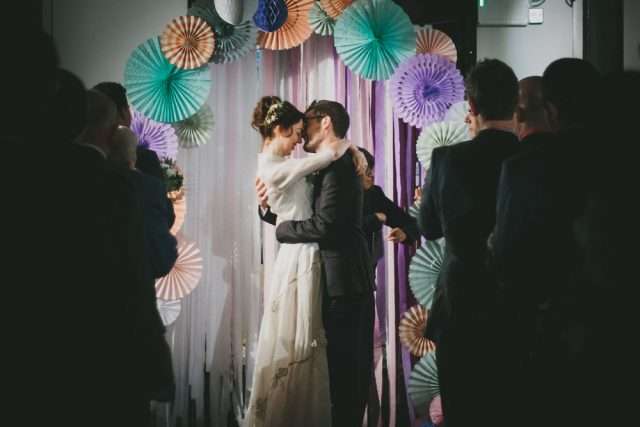 “Our ceremony was short and sweet with music from the White Stripes and Pixies. Fun was the most important thing for us so throughout the wedding day we handed out popping candy, played ping pong and lit sparklers by the canal to keep everyone happy… and kept dancing til 2am! We made sure to grab a moment together to pop upstairs and look down on everyone dancing: it was hilarious and really lovely to see all our friends and family members on the dancefloor together.” 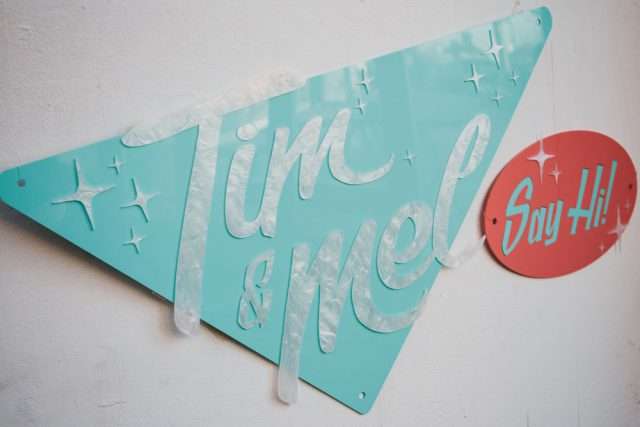 “Some of our favourite elements weren’t actually planned”, she continued. “The gallery had recently put up a mint green neon sign, which turned out to perfectly match our decorations, and the life-size model panther was a last-minute addition borrowed from Tim’s artist brother, which proved to be the ultimate photo booth prop!” 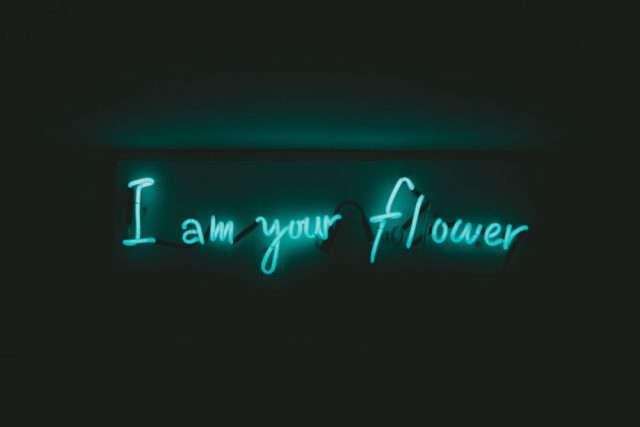 The couple enlisted help from family and friends to help with their DIY projects. “The archway that we got married under and used as a photo booth backdrop was a serious team effort; we made it with a group of friends in the week of the wedding, with the help of some trusty chicken wire and a garden trellis that only cost a tenner. Friends helped with nearly every element – all the design, photography, music, rings and even the wine came from people we know, which made the experience a lot more relaxing and fun (and mates rates are always a bonus!).” 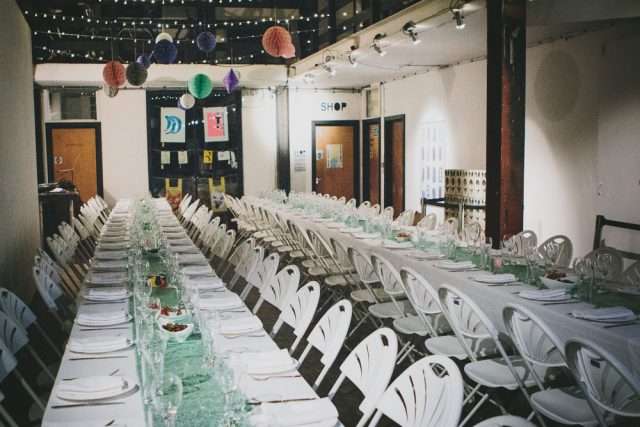 “The one thing we wish we’d done differently is actually read the information from the registrar more carefully! We nearly missed the deadline for giving notice! Luckily we got the last possible appointment.”

Mel and Tim’s favourite part of the wedding was their first dance, which they’d not had time to practice for. “We hadn’t really practised for our first dance and I was convinced I was going to trip over my dress, but it was brilliant! We chose a fast and fun song (Another Girl, Another Planet by the Only Ones) and flung each other around the dance floor. By the end of the evening my dress was missing an arm from dancing so hard!” 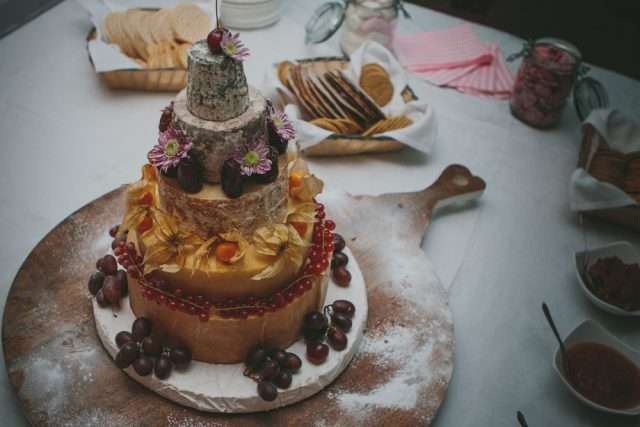 “Our biggest expense was the venue and finding one that that had the atmosphere we were looking for, within our budget, proved surprisingly tricky. It was quite demoralising sifting through lots of places that didn’t feel right or were horribly expensive. In the end the venue we found was awesome; it’s an art gallery by the canal in Hackney Wick – there’s a floating area outside which looks onto the Olympic stadium (perfect for smokers and sparklers), and a mezzanine with a ping pong table.” 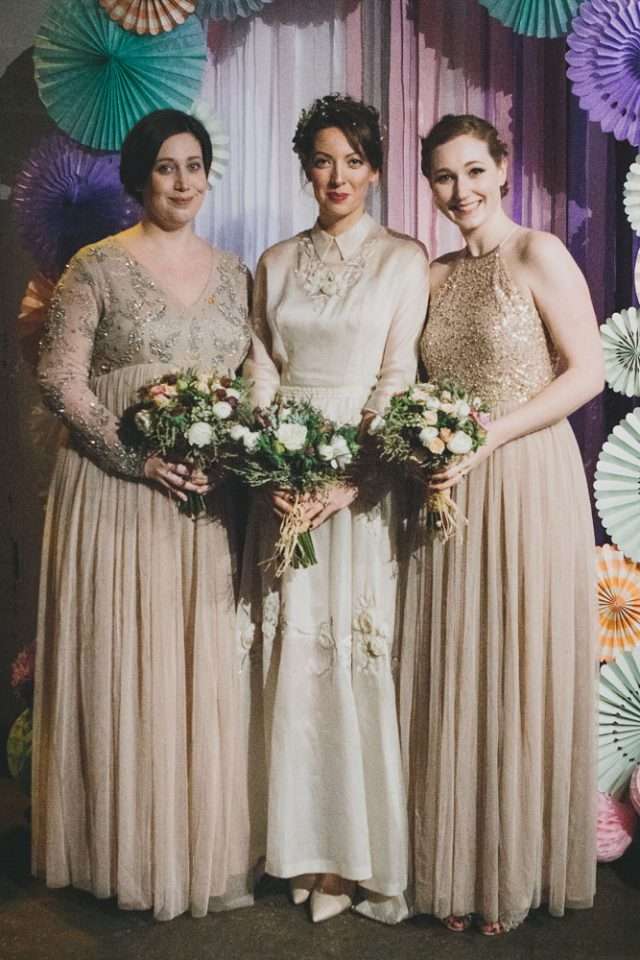 “We also spent an embarrassing amount on shipping green sequinned tablecloths from China a few days before the wedding. We now own 16 of them and have been trying to palm them off on people ever since! However we saved money by not bothering with anything that felt superfluous such as cars, save the dates and table plans. We also bought cheap decorations for Amazon, Ikea and Tiger which were great and saved us money.”

“In retrospect, the only thing we would have done differently is appoint a friend as master of ceremonies”, she concluded. “There were a few moments where we had to move people about, or tell guests what was happening next – which wasn’t very relaxing!” 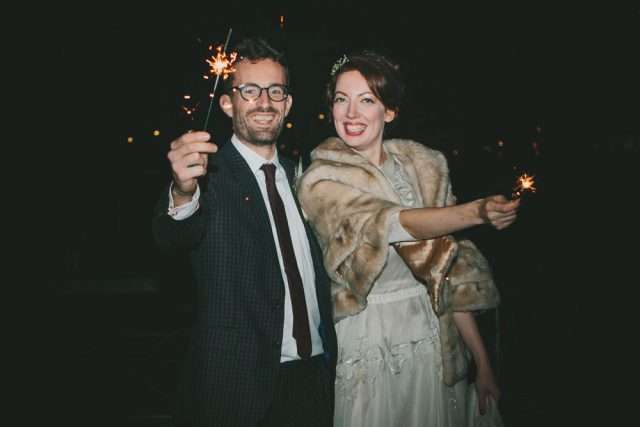 “Our advice for future brides and grooms is that you don’t have to let planning a wedding take over your life. This wouldn’t work for everyone, but we organised everything within a few months, at a time when we were really busy with work and moving house. It made us really decisive and we didn’t have time to get stressed. It’s easy to get a bit overwhelmed by overthinking all the details or looking at other people’s weddings, but you need to remember that your guests love you and are predisposed to have a good time – so try not to agonise about making things perfect!” 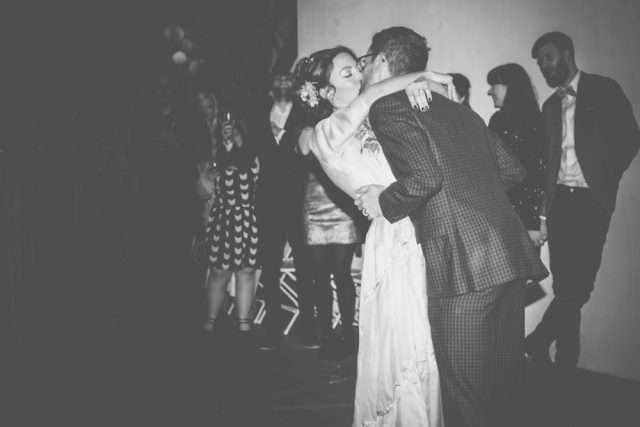 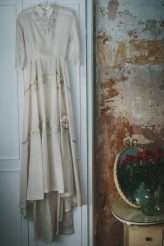 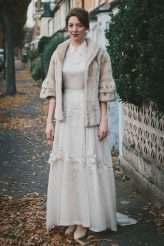 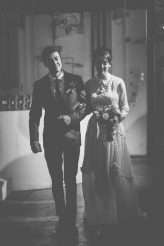 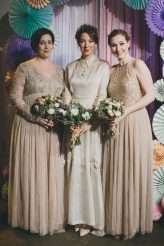 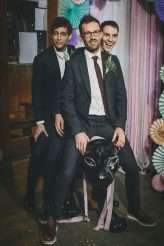 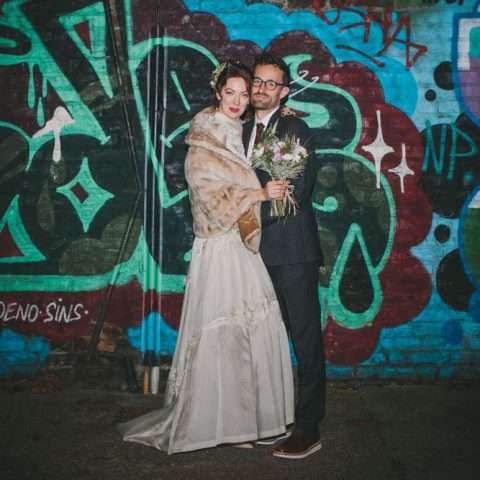