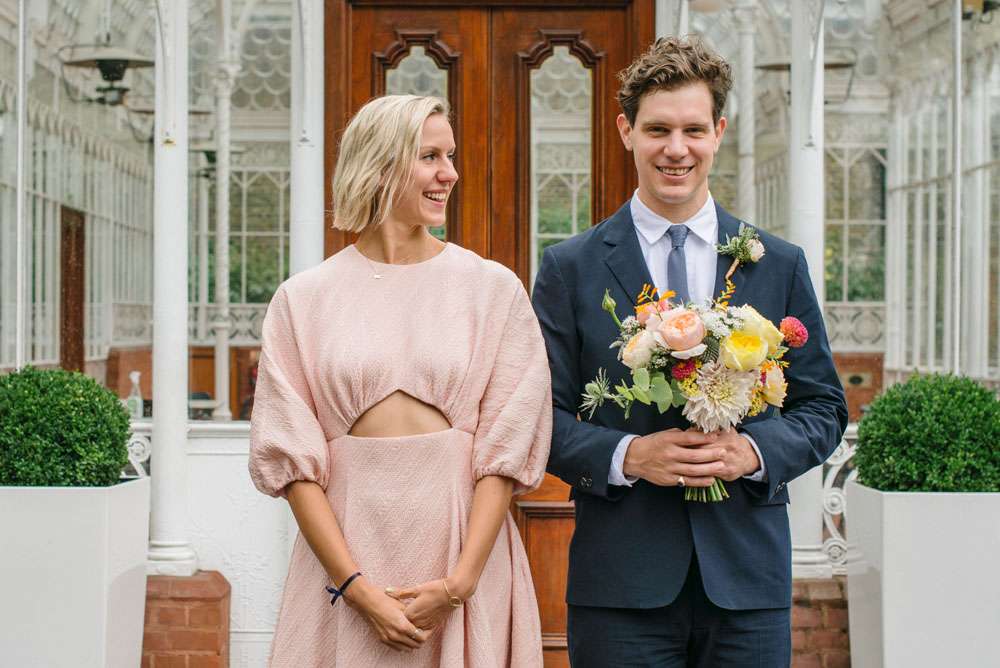 Hannah and Jonathan met through Hannah’s sister and her husband who is Jonathan’s best friend! They knew each other for ten years before getting together, when they realised they had been kindred spirits all along. Despite long distance (San Francisco to London) they stayed together and after a year Jonathan proposed and six months later they were hitched! 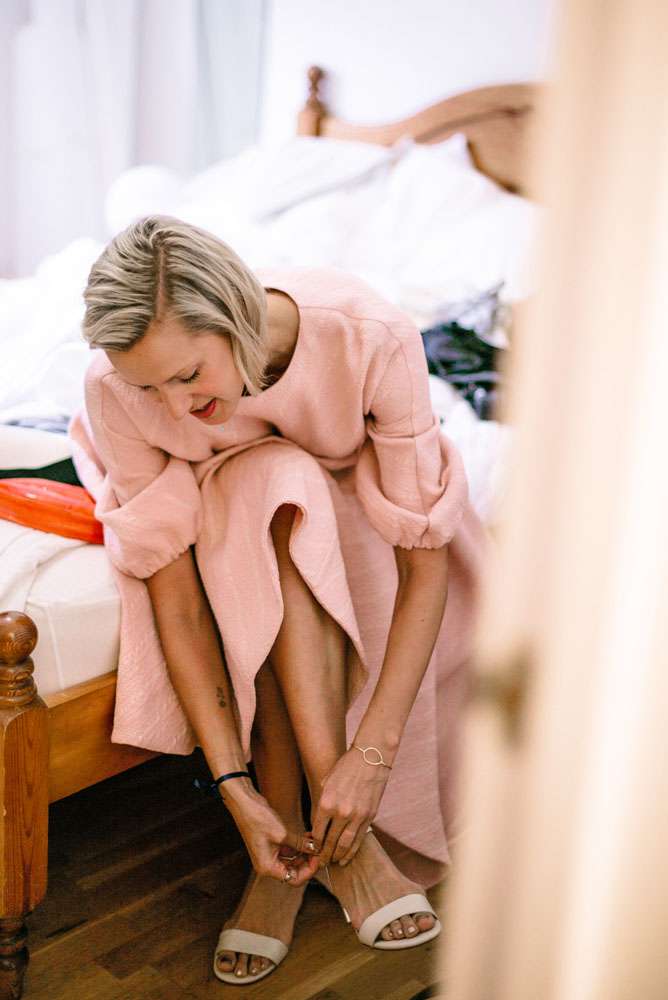 They wanted to keep their wedding small and local, and didn’t want the day to feel like a wedding at all, but instead a special day of bringing together their two families. They wanted it to be relaxed and laid back and to feel just like a big family gathering. They did away with a lot of traditions which they didn’t feel were necessary and only included what was important to them. 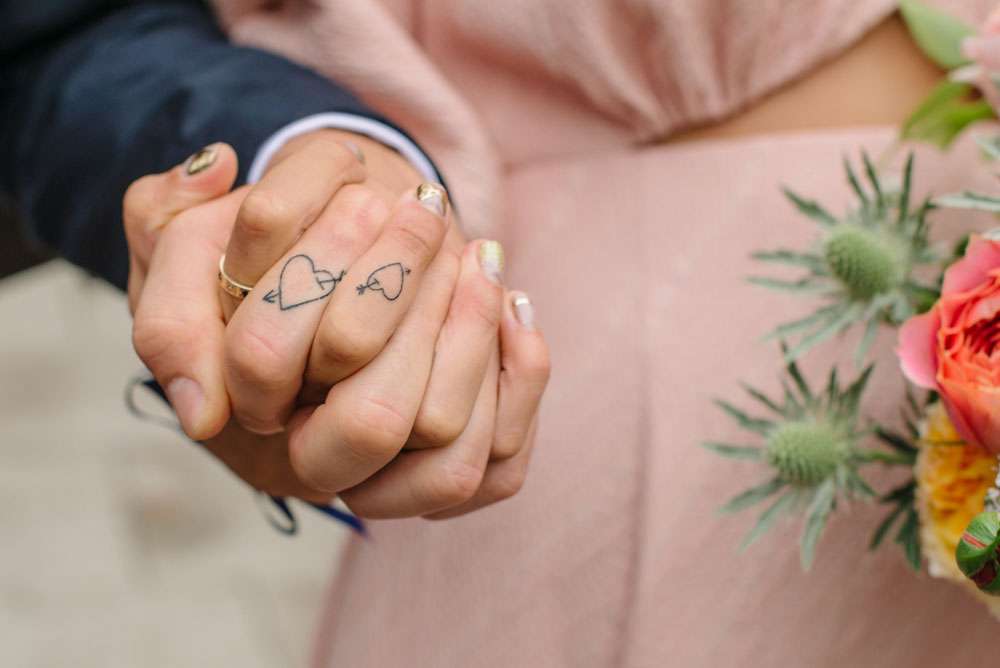 “We knew we wanted our day to be a celebration with our friends which just felt like a fantastic party,” began Hannah. “We sat down shortly after getting engaged and wrote down everything we wanted, and didn’t want, our wedding to be. That list was our go-to document whenever we were a bit overwhelmed with details or making decisions and became invaluable.” 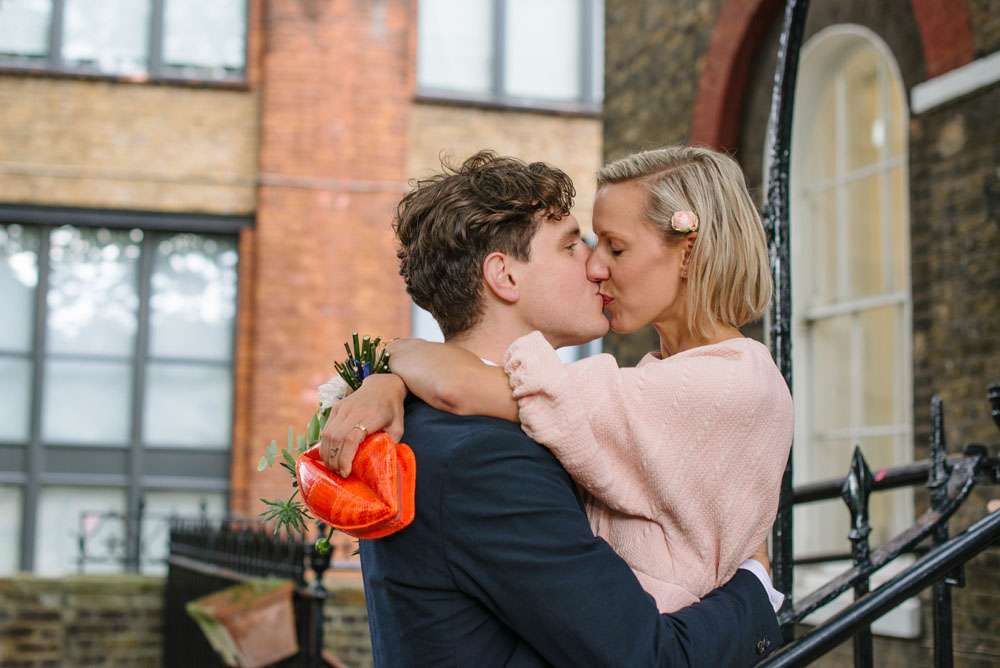 “For inspiration we looked to weddings from a bygone era, where it was the norm for the bride to put on her best dress and head to the local register office with her beloved in his best suit. I think secretly we would have got hitched in our own at the town hall in San Francisco, but we knew we could never do that to our mums! We were married in London but the flower colours were inspired by the Californian sunset, as were the little cacti on our wedding breakfast table.” 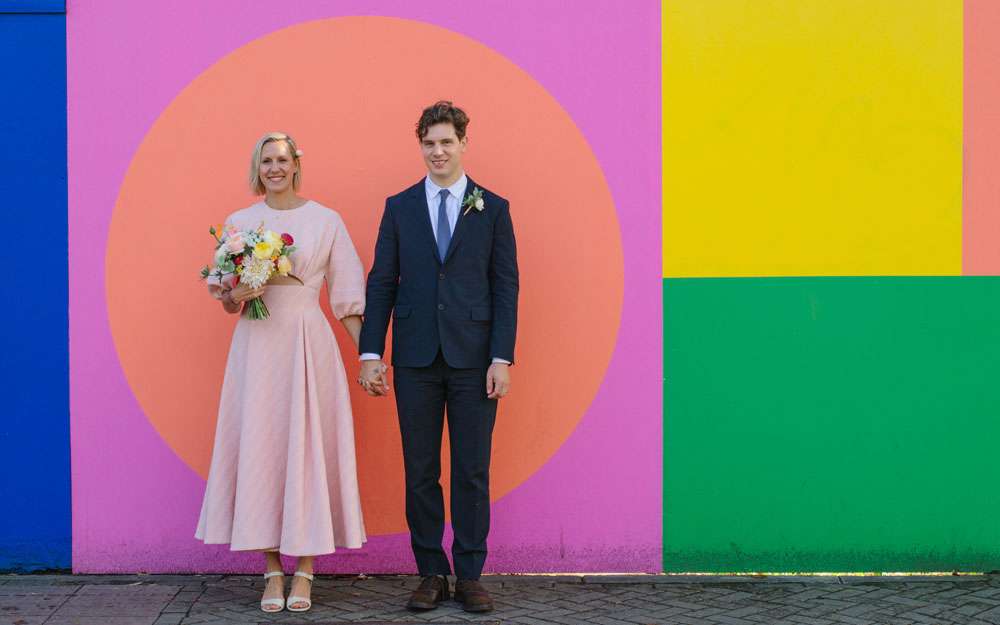 “We did away with nearly every tradition in the book!” she continued. “We are both ardent feminists and so did a lot of research into the history and meaning of many wedding traditions, to make sure we kept our day true to our values. Jonathan wore his ring throughout our engagement, we went outfit shopping together (cue many shocked faces from the retail assistants), we spent the night before in our house together and got ready together the following morning.” 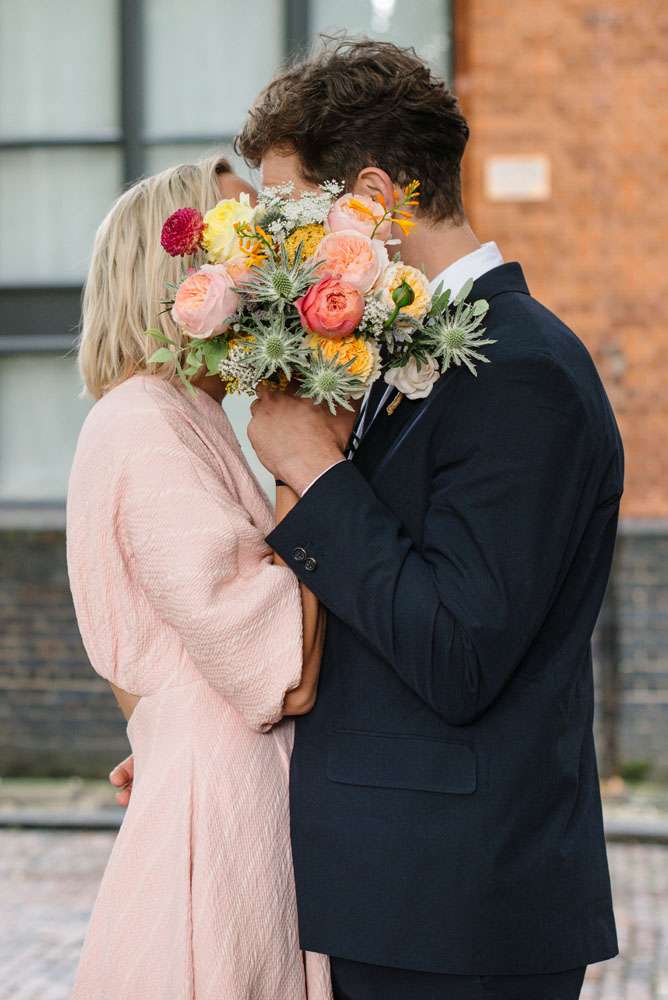 “We planned the whole wedding equally and made every decision together, and never let anyone refer to it as ‘my day’. We had no bridal party, because we didn’t want to single out anyone from our already small congregation, but everyone had key roles to play. We also did away with fancy cars, traditional favours, gift lists and paper invites. Instead of the bride walking down the aisle and being given away, we had our guests enter to music while we were already sat at together the ceremony table. It was very special and fun!” 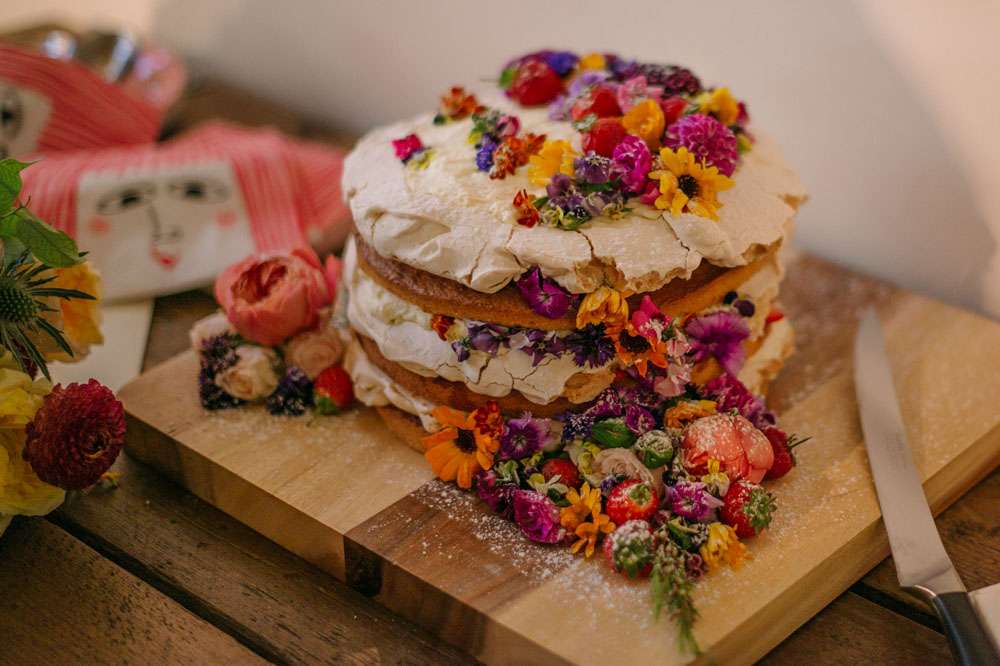 “One of the biggest decisions for us was what to do about our surnames. We debated many options and in the end we both changed our names to a new name, Ray, which has some history in Jonathan’s family and is a shortening of my middle name. I also took his middle name, Michael (also my father’s first name), as a middle name for myself, so taking something from my father and husband in my new name.”

The couple were married in September at Southwark Register Office in Peckham, which is where they live in South East London. “The morning of the big day was lots of fun getting ready with my sister and her husband. Our photographers, Jess and Charlie, are also friends of ours and other members of the family all stopped by throughout the morning when we had brunch and got ready together. We just had those closest to us (our immediate families and a few local friends) come to the ceremony. Afterwards we had a few photos in the garden before heading for celebratory drinks down the road at The Peckham Pelican, and later dinner with our families at No67.” 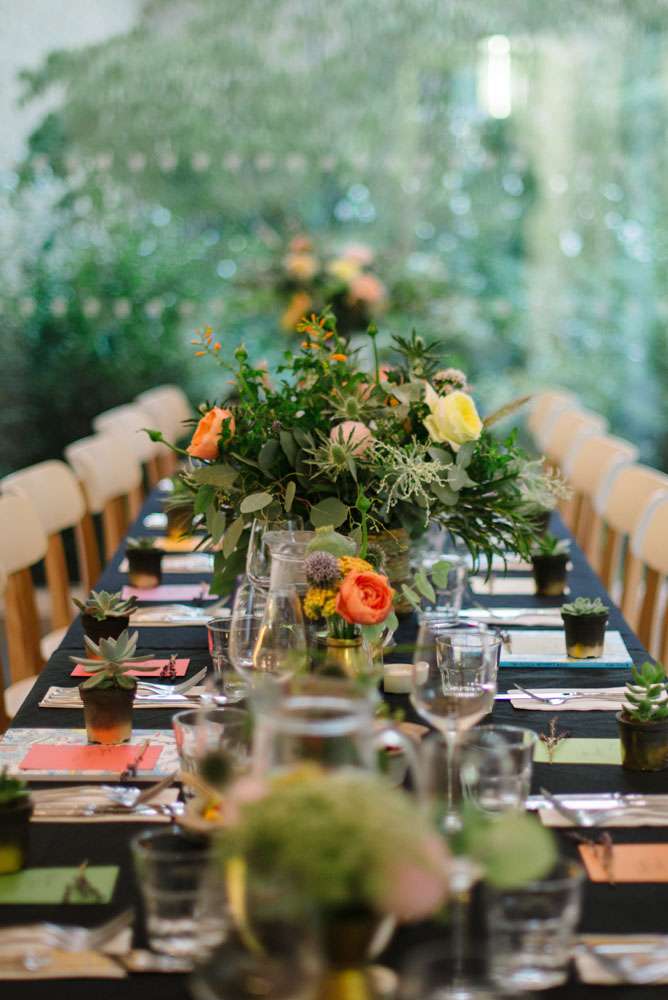 The couple did a lot of DIY projects, with help from family and friends. “We are blessed to have many talented and creative friends and family who all made our day unique and special. My big sister Kate and my mum made the gluten and dairy-free cake, Jonathan designed all our paper invites, and I learnt some calligraphy from Youtube for the envelopes and our place names. We also made our photo booth, sweet shop and decorated the party venue ourselves with big help from friends and family. Our DJs are all friends of ours and helped us set up the party too.” 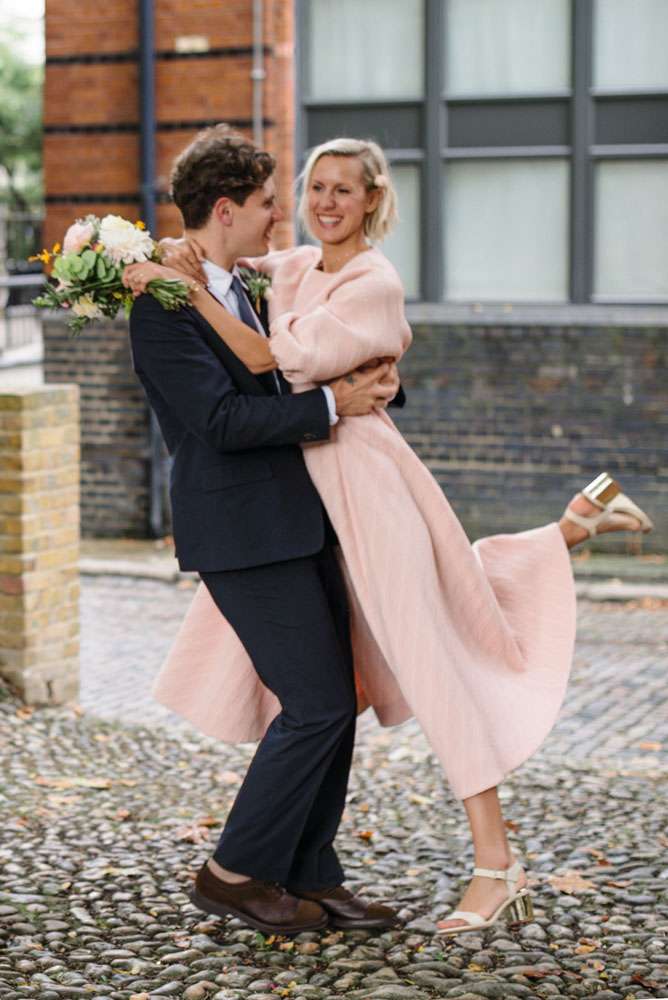 “Our advice for future brides and grooms is to practise your speech if you can and enjoy it! Find a way to enjoy every part and play to each others’ strengths. We had a motto for when we were making decisions which were getting a bit complicated, which was ‘do the simple thing first’. This helped us focus on the most important details! Don’t mention the work ‘wedding’ to people when booking party-related things too and go paper free for invites!”

“We’d also like to say big thanks to our photographers Jess and Charlie who captured our vibe and day so well. They also did an engagement shoot which was so helpful for us to feel relaxed in front of the camera and know what to expect on the day. They are both super easygoing and lovely and were a key part of making our day so special for us.” 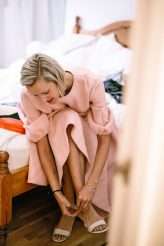 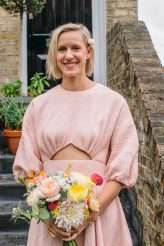 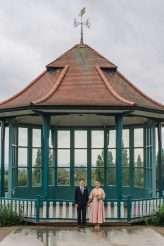 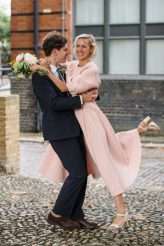 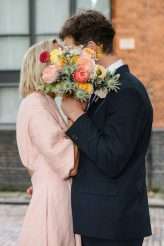 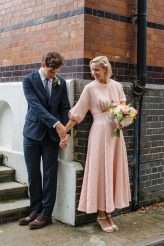 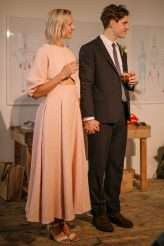 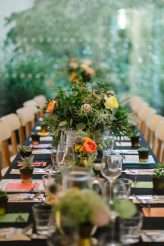 Emma and Roxy's relaxed city chic wedding day is a totally beautiful celebration of love. It's so easy to get caught up in the aesthetics of weddings or the little details, but at the base of it all, it should be about a gorgeous love story. This magical North London pub wedding totally does this (although it nails the aesthetic details too!)

Jess and Paul's wedding is a modern day London fairytale. Their autumnal celebration featured a lot of gorgeous and delicate gold elements with splashes of pink, beautifully simple single-stem bouquets, and a plethora of incredible suppliers local to Islington, where they first meet for a date night after work.

Love. Family. Keeping things Simple. These were the three key things Vanessa and Clotilde wanted to focus on for their July wedding. They said their vows in front of only their nearest and dearest at the quirky venue, Downstairs at the Department Store in Brixton. Afterwards they hosted a joy-filled reception at Upstairs at t the Department Store, a brand new restaurant and bar. They didn't want to spend a lot either, with their budget maxed out at £5000.