Sara and Marc were married in a castle. Their day had a gothic feel and the bride wore purple! Their budget was just $8,000 and they saved money by DIYing the décor, not having a DJ or band, and by avoiding using real flowers or having a traditional wedding cake. They were also very lucky to win their wedding photography in a competition!

“If I had to choose a theme for our wedding id say it was ‘gothic chic'”, explained the bride. “It was dark and beautiful, classy, and feminine. We wanted the wedding on Halloween but the venue was already booked so we went with the 10th October instead. However it turned out to be better than if we’d done it on the 31st because the weather was perfect!! 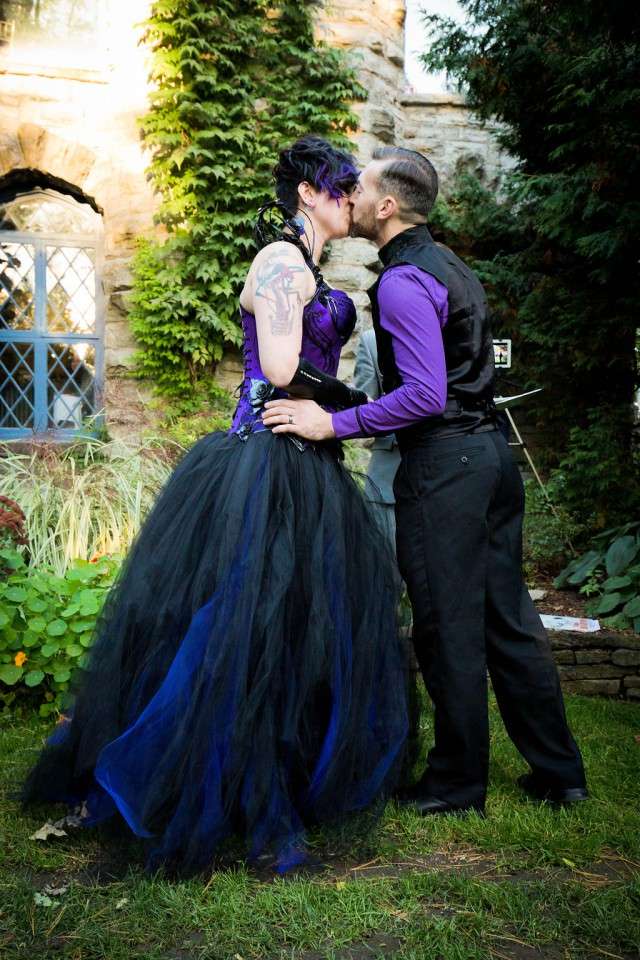 “Still, we kind of went with a Halloween theme. We had bats hanging off the centrepieces which were made from branches, skull garlands hanging behind our seats and black glitter pumpkins on the tables. Marc wanted to have a modern day Lestat look for his outfit, which I think work out perfect for the look of the wedding.” 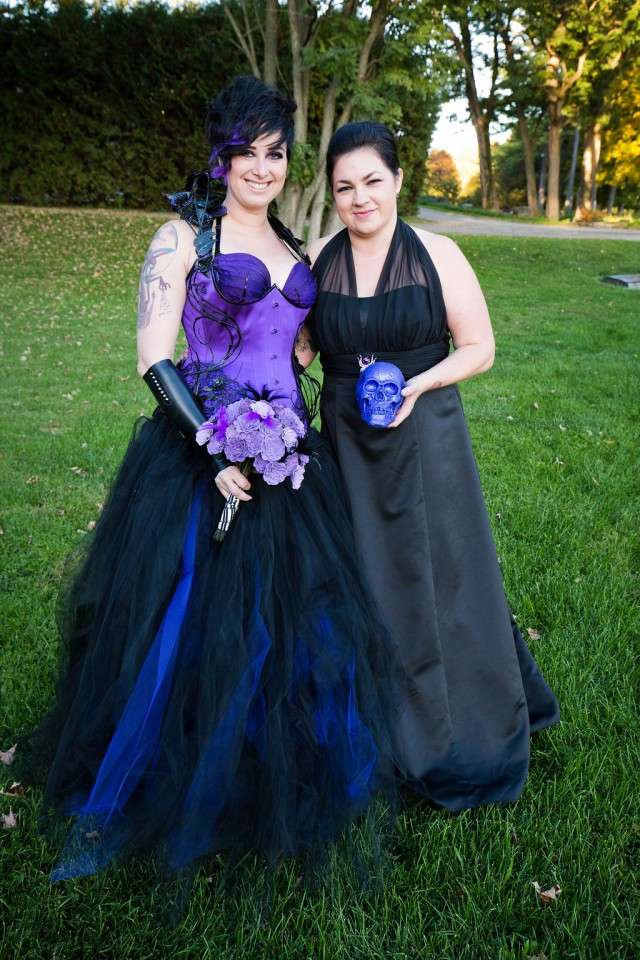 “We avoided doing anything traditional”, she continued. “We had nothing white in our wedding, even our table linens were black and purple. My maid of honour carried a glittery purple skull down the aisle instead of flowers. Our officiant used my hard-cover Suicide Girls book to hold his speech in, which I thought was pretty awesome! For favours we gave out chocolate eyeballs in pretty black and purple boxes and we had little black paper bats tucked in the prongs of the forks. We played the Titanic sound track during our cocktail hour since we got engaged at the Titanic museum in Tennessee! We also had all the music from The Hobbit and Lord of the Rings playing during dinner, since we are huge fans of Tolkien’s work and we are going to New Zealand for our honeymoon.” 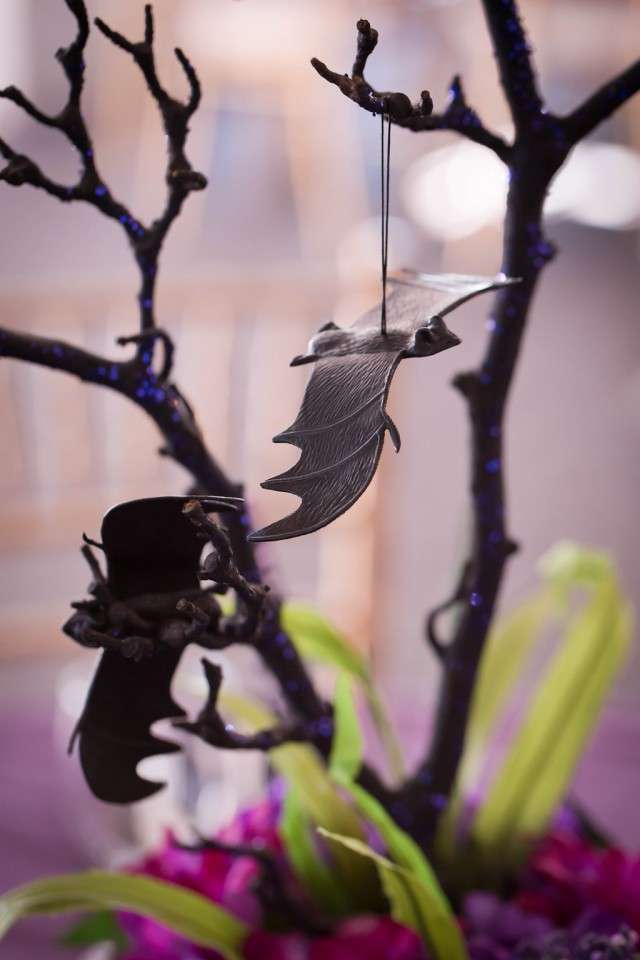 “If we were doing it all over again I’d make sure I relaxed more”, Sara concluded. “I was so worried about wanting to be a part of every single minute of the wedding that I didn’t allow myself to get all of the pictures outside that I would have liked. We wanted so badly to get up and enjoy the cocktail hour with everyone that we cut ourselves short on our portraits.” 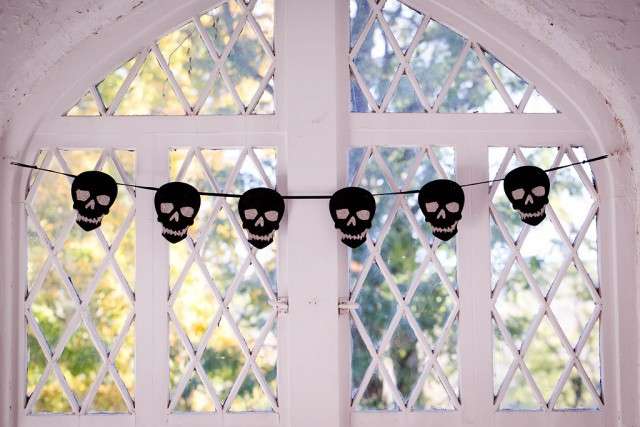 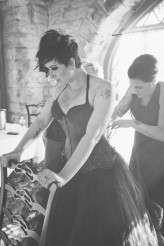 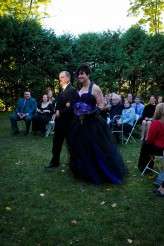 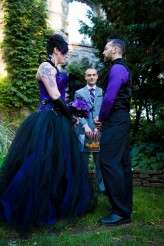 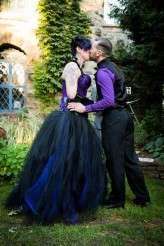 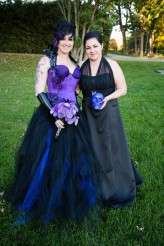 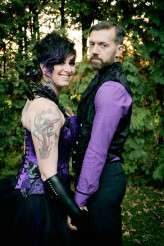 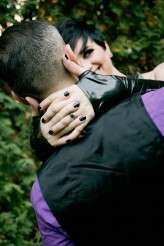 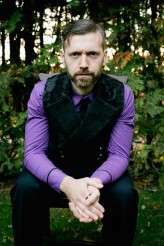 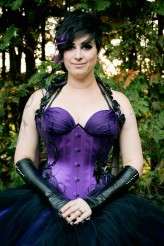 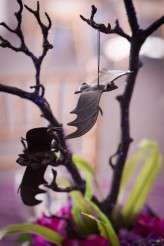 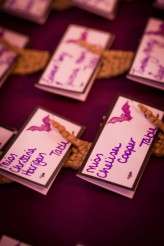 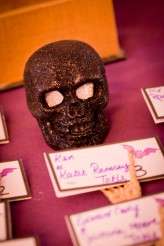