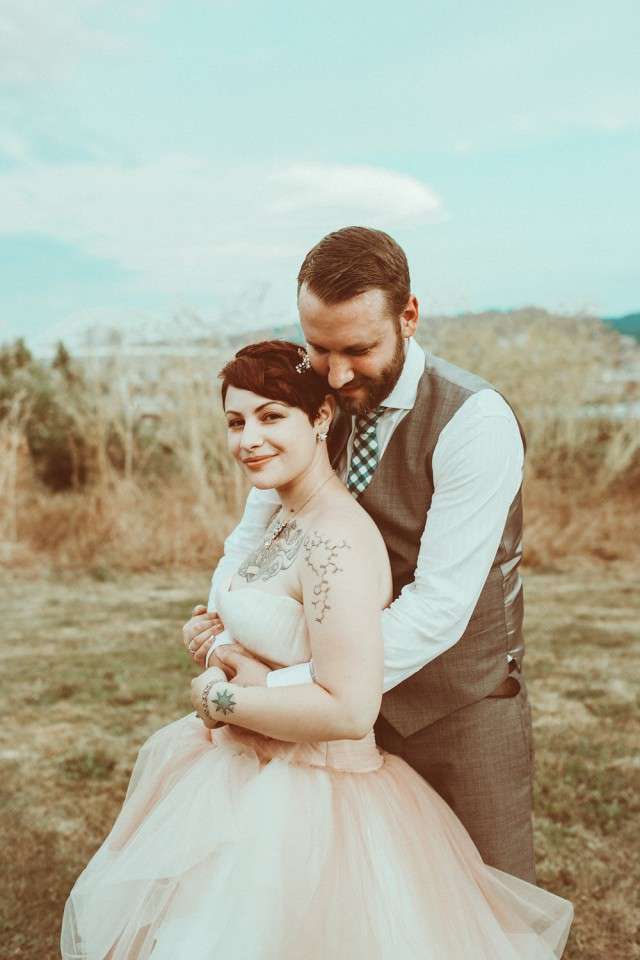 Lulu and Alex’s June wedding was held at The Historic Overlook House in Portland. Their wedding theme was based on a sentence that they came up with on early in the planning process. “Science, Stars and everything we love”, Lula said, “and we only picked things we really loved. We obviously had our favourite colours but also dinosaurs riding pine cones, temporary star tattoos (our son loves temporary tattoos), food from our favourite restaurant, Erlenmeyer flasks, wood tables and chairs, paper crafts, mercury glass, and all the weird beautiful flowers and eucalyptus I could have asked for.” 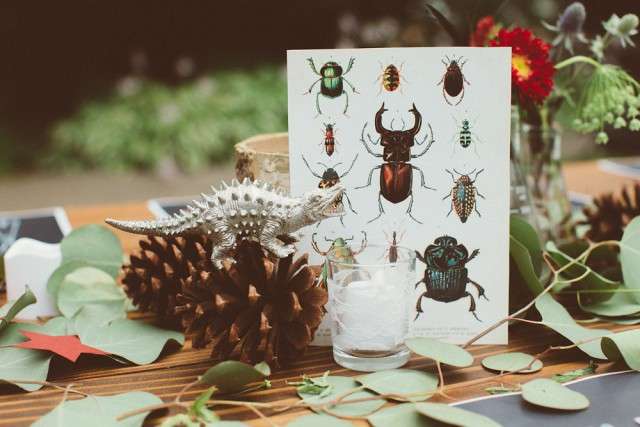 “Our wedding was so especially ‘us’ in every way possible and everyone commented on that throughout the day”, she continued. “We didn’t pick a random theme and we weren’t obsessed with Pinterest even though we incorporated a lot of DIY ideas and printables from the internet. The day was also geared towards families. We made a chalkboard table for an entire kid area with printable colouring books, lots of lemonade and (non-alcoholic!) cider.” 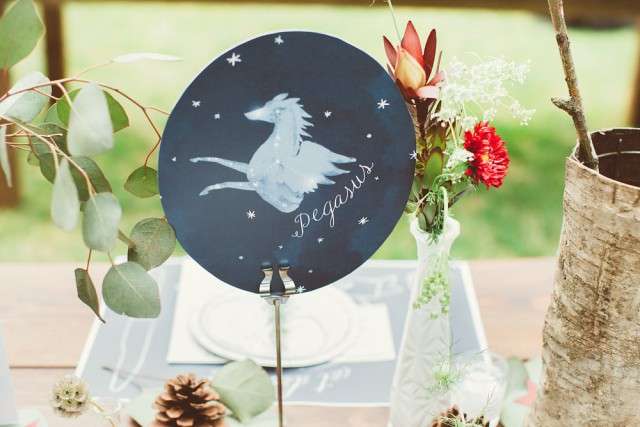 “We made most of the decisions together including picking what the bridesmaids would wear. Also our son has lots of varied interests so when he asked for months on end to wear a dress just like mommas to the wedding we let him pick out a pink fluffy dress to be the ring bearer in!” 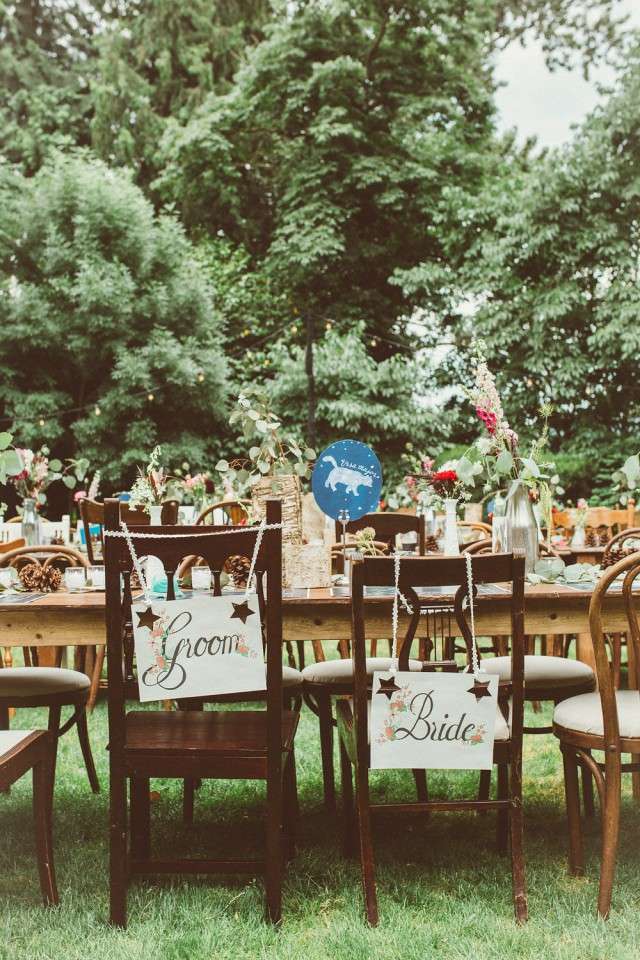 They also tried to make the wedding as eco-friendly as possible. “We used compostable palm plates, cups, straws, flatware, and had compostable bags in the trash cans so that all the food waste from the wedding was composted. We bought a lot of the decorations second-hand and will be selling them on craigslist again to send them back into the world for reuse. All the paper crafts we made on recycled paper. Some waste was unavoidable but I feel we managed to minimize so much of it compared to how much the average wedding must produce. I think we only had one trash bag at the end of the day!”

The bride wore a White by Vera Wang dress from David’s Bridal. “Finding my dress was an interesting part of the planning process”, she explained. “I found the dress before we had anything else figured out or planned, only about a month after Alex proposed. I wanted to spend a lot of time looking for the right dress so I started early; it really felt important that the dress feel perfect for our day. I’d gone dress shopping with my grandmother and one of my bridesmaids but hadn’t found anything that stood out. I liked blush and non-traditional dresses so I had been trying on a lot of mermaid style ones, but I kept being drawn to this blush princess dress that I’d seen on a blog feature that looked ethereal and fluffy.” 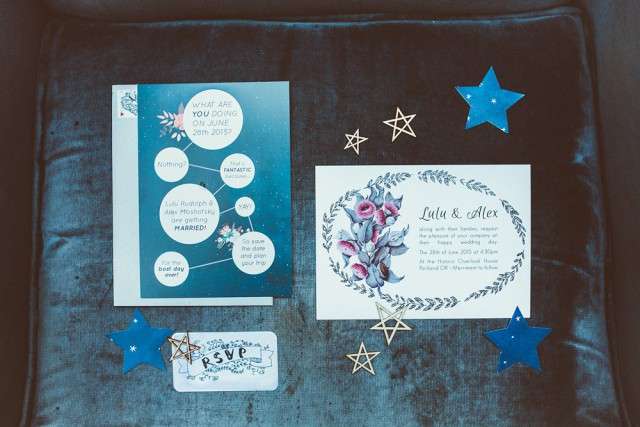 “I started looking for it but found out it had been discontinued and there was only one left in the entire state of Oregon! It was 30 minutes from my house in my size and on 50% clearance! I went to try it on that day by myself; I put it on and immediately sat down amongst all the fluff and felt like a cupcake. It was serendipity, and it was mine; so only 1 month after the engagement and 10 months before the wedding I had my dress in my mom’s basement closet. My feelings for it stayed the same and I didn’t want to take it off at the end of the reception.” 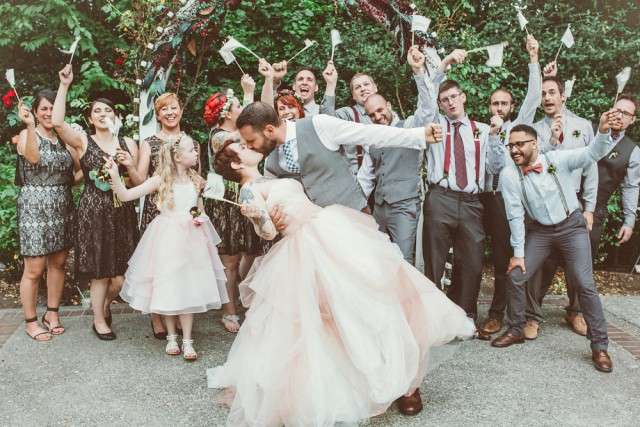 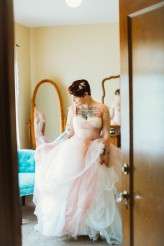 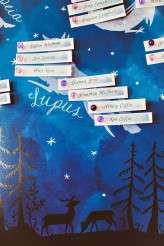 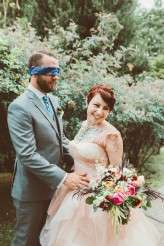 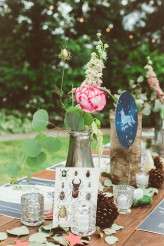 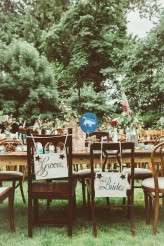 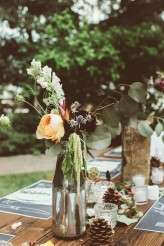 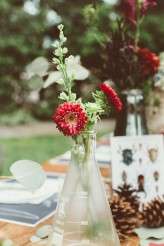 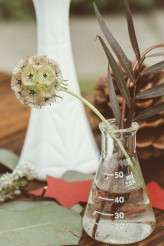 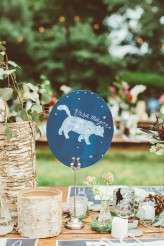 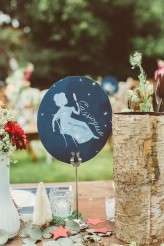 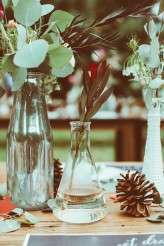 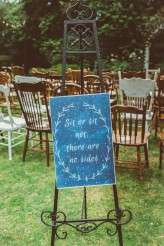 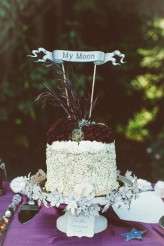 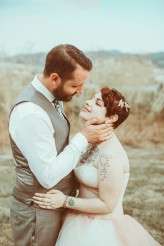 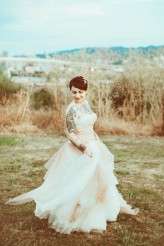 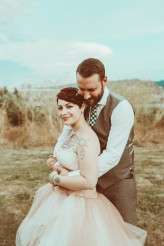 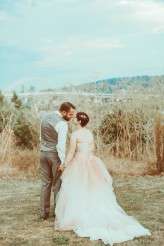 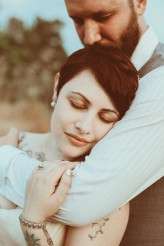