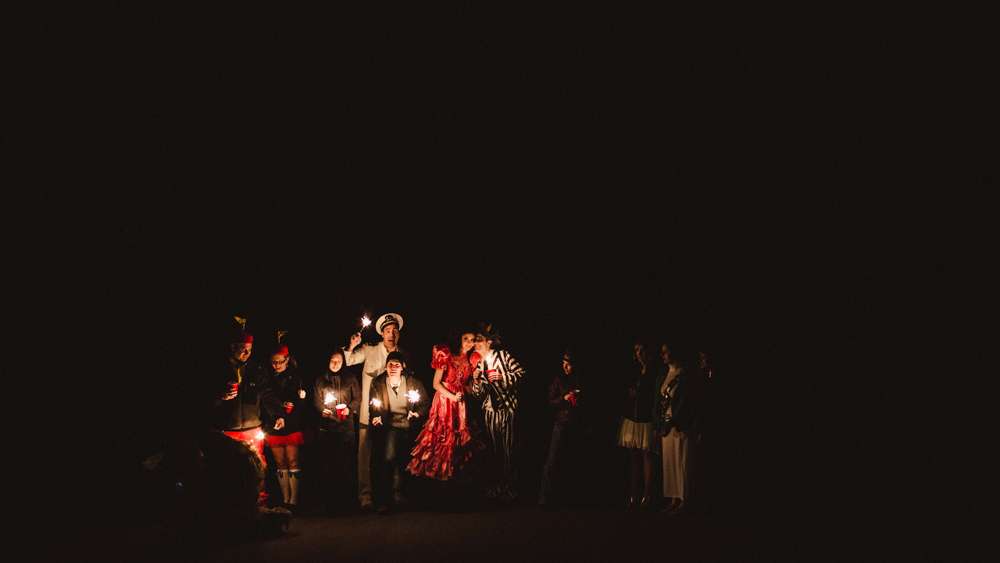 Gary and Traci love Halloween. So much so that they decided the best place for them to get married would be at their Halloween party in their own home. The coolest part of this wedding was that it was a complete surprise for all their guests! After telling everyone they were getting married then and there, they then assigned each attendee a roll in the celebration.

“We were trying to figure out how to do a ceremony and reception for our families that live in New York and California when we live in Alaska”, explained the bride. “We wanted our ceremony to be meaningful and something we could share with family at a later date, but we also wanted to focus on the celebration part of marriage and do that with friends that we know will be there to support us in the future with our families not geographically close.”

“I am a BIG fan of Halloween and we knew we were going to throw a party at our house”, she said. “It was a dream come true when Gary came up with the idea of doing a surprise wedding ceremony during the party for our friends. In Alaska, any person can marry you, so we came up with a plan to choose ‘characters’ to fill the traditional and not-so traditional roles during the wedding. We had roles for an officiate, maid of honour, best man, slutty bridesmaid, drunk uncle, father of the bride, ring bearer, flower girl, and wedding singer. The best part was, not knowing which friend would get selected to play each role.”

Check out the incredible film, made by Lauren of Beauty Board Media, and all will be explained…

“We found vows online that we pieced together and made a few alterations that made them more meaningful to us”, she continued. “It worked out perfectly that our good friend Mallori was drawn to play the role of the officiant. Although the night could be described as one big party the exchange of vows made the marriage feel real and I will never forget those moments.”

“The biggest expense for the wedding was our videographer but it was the best decision we ever made. Now we have a lasting memory of our non-traditional wedding to watch for years to come. Our advice to other couples would be to do what makes you happy. Be as creative as you want and at the end of that day you won’t have any regrets!”

DIY Wedding in Chile with their Dog as the Videographer!

Wedding photographers Cathy and Seba really knew what they wanted, but also what they didn't want, for their own wedding. They were married in Chile in August and put their biggest effort into enjoying the whole process and into making as much as possible with their own hands.

Scare-Fest Wedding & Searching for ‘The One’: Sarah & Colin

For their October wedding at Whittington Castle and Wattlesborough Village Hall, Sarah & Colin wanted a scare-fest. Halloween, pumpkins, zombies & vintage circus horror were their inspirations. "When you first start to plan a wedding you are given strict instructions by every bride you know to research research research. You read magazines, you trawl through websites, you create a scrapbook of what you think your wedding should be", wrote newlywed Sarah. "I had 2 ½ years to plan my big day, and no matter what I saw I just didn't feel like it could be part of our day! Everything was so beautiful, classic, elegant... and so not us! I am mad about vintage but after heading to a vintage wedding fair I had started to lose hope. It was all too twee, too perfect. I am a rummage in the hay bales listing to The Coasters kinda vintage and it just wasn't there for me. Then after seeing a lady flying round the fair with pink hair, I was informed of Rock n Roll Bride by my friend Ffion and my world was changed! I saw couples who broke convention, who played their wedding their way and weren't afraid to let the world see their personalities through their big day!"