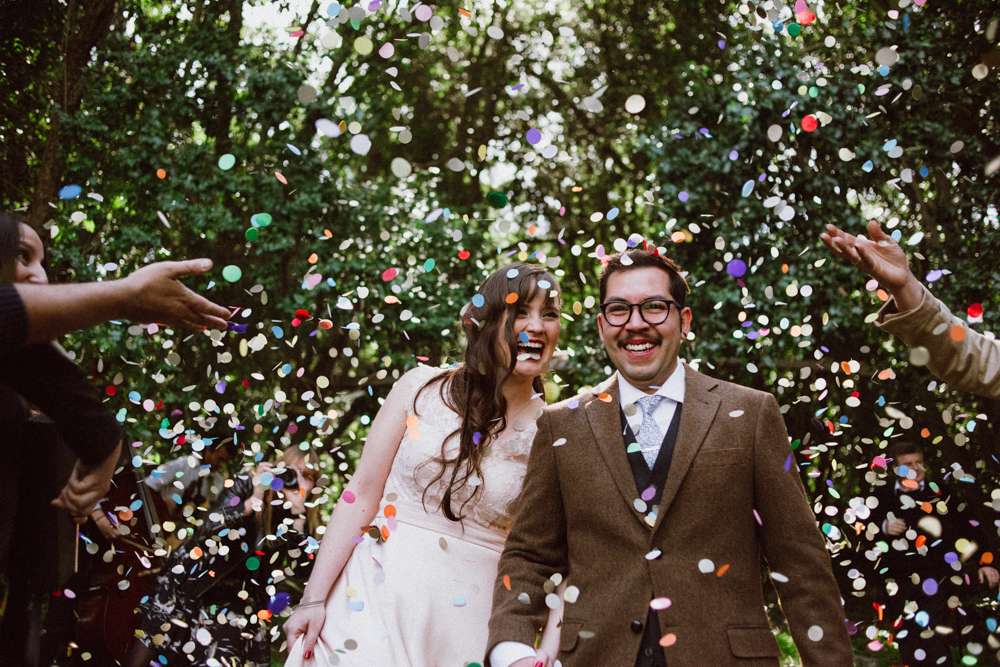 Wedding photographers Cathy and Seba really knew what they wanted, but also what they didn’t want, for their own wedding. They were married in Chile in August and put their biggest effort into enjoying the whole process and into making as much as possible with their own hands. 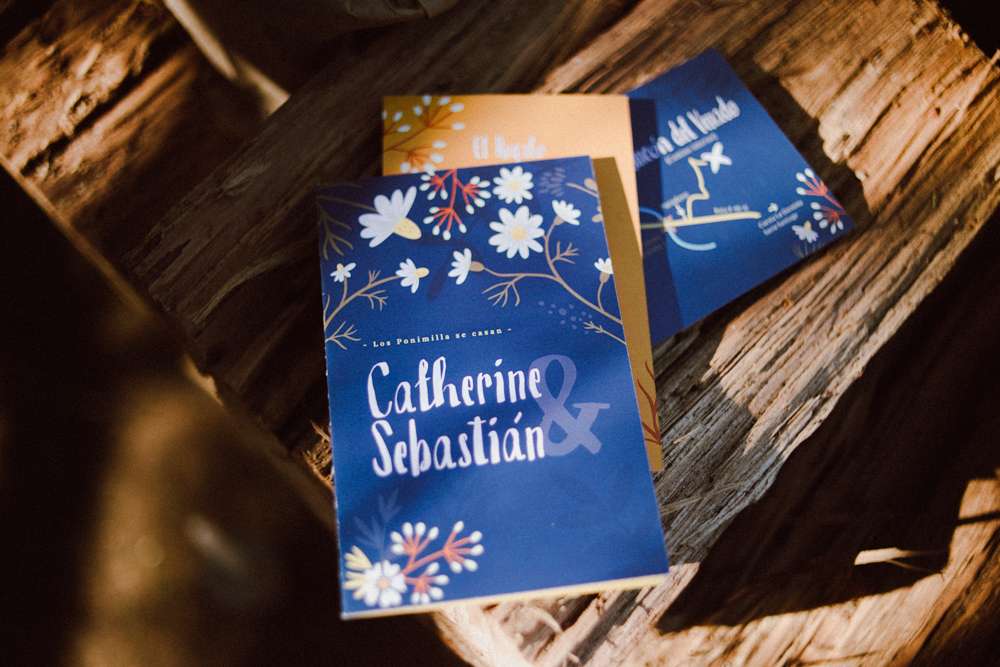 “Our wedding was, relaxed, DIY and focused on us and our friends,” said Cathy.  “We didn’t have one specific inspiration, but we made a Pinterest moodboard with all the things we saw all over the internet and wanted for our day.” 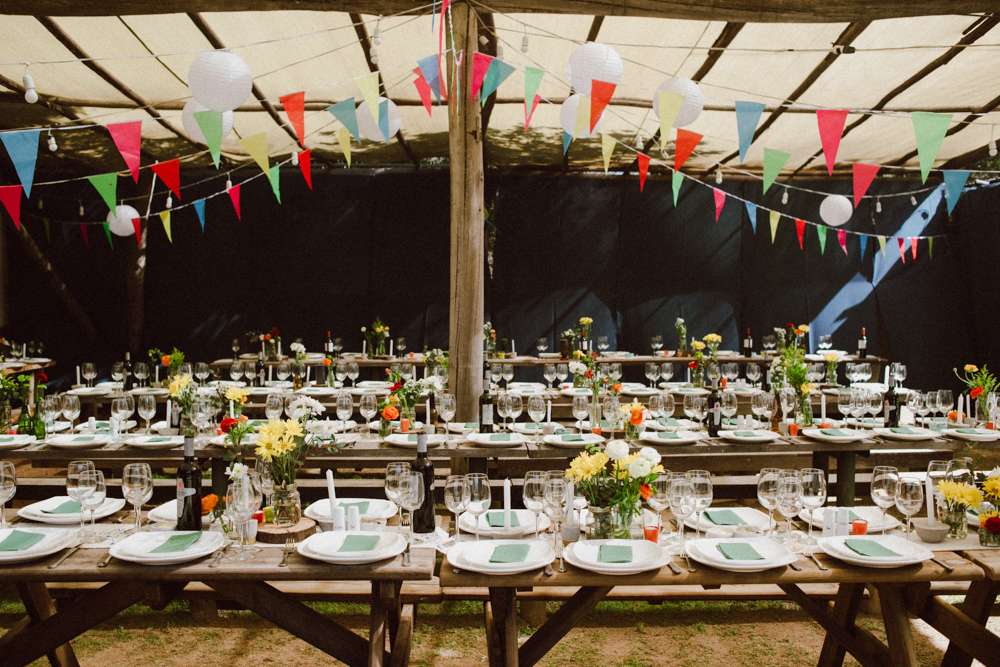 Cathy and Seba’s wedding ceremony was very unique, and didn’t follow the traditional format, “Our ceremony was neither religious nor civil. It was game guided by our friend Oscar who came all the way from Netherlands to Chile just to be with us that day. He played a game with all our guests singing an old song from our childhood called El Anillo (the ring). Between each verse each of our closest friends read something to us from the bottom of their hearts, and after it was finished we cried! Then, at the end, we exchanged vows and rings.” 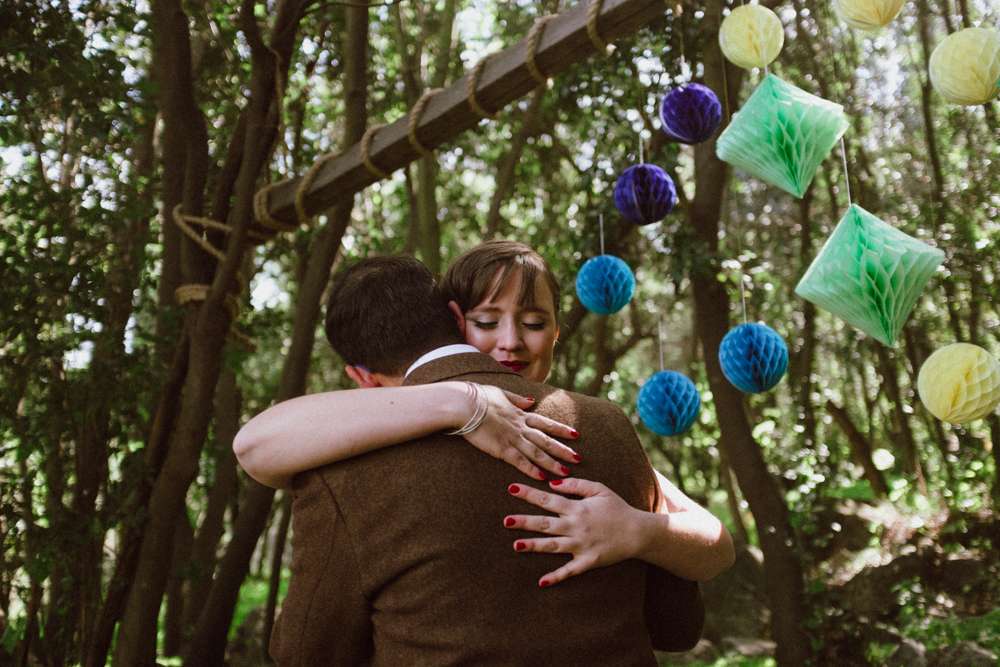 After their ceremony, they shared food with everyone, which turned into a massive picnic. “The lunch was made by the terrific crew at Roberto Galvez, but also by all our guests. They brought desserts, salads and amazing dishes for share with everybody. After the lunch, everybody took a blanket, put it on the grass and made a massive picnic, nap, dessert sharing area! It was beautiful and lasted all the afternoon.” 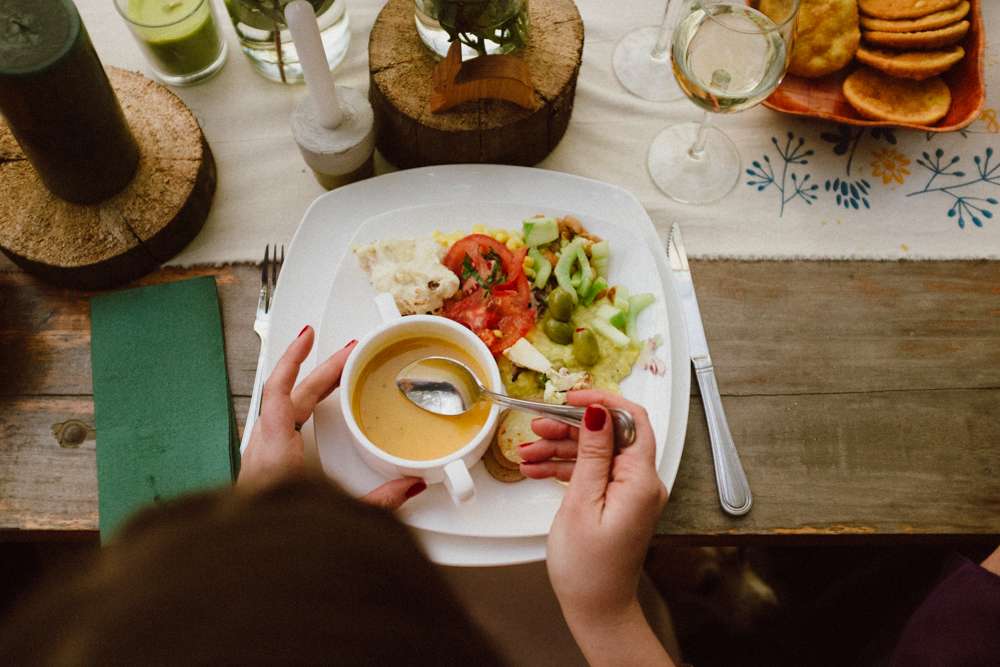 Two of the most unique aspects of their day was the bride’s homemade dress and the fact that their dog acted as their videographer! “Our corgy, Leica, made the video of that day with a GoPro on her back!”, she laughed. “We love what she managed to capture.”

“We made almost everything by our own hands. We silkscreened table cloths, made concrete chandeliers and did all the foral arrangements. Also we hired and hung all the Tuscan light bulbs and the pendants at the venue. For my wedding dress I had bought a dress from Modcloth, but it didn’t fit me so I redesigned it with my friend Natalia. In the end we only kept the top of the dress and were very lucky to find the same colour in a fabric store in Santiago for the bottom. I also made my headpiece with some crin flowers (a technique that uses horse hair to make the flower shapes).” 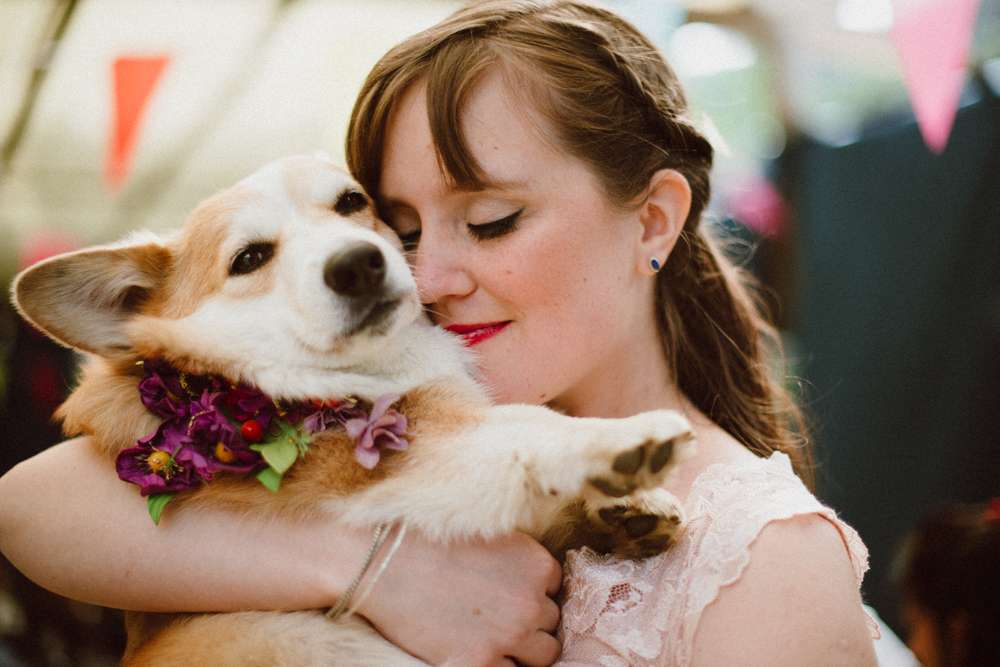 The couple saved money by picking a venue which had never hosted a wedding before. It was a risk but luckily it worked out! “The food was our biggest expense, but the thing we saved the most on was the venue”, she explained. “Octavio, the owner, trusted 100% in our idea and he let us do everything we wanted. He also helped us a lot with every detail. He was one of our most important guests on our wedding day.” 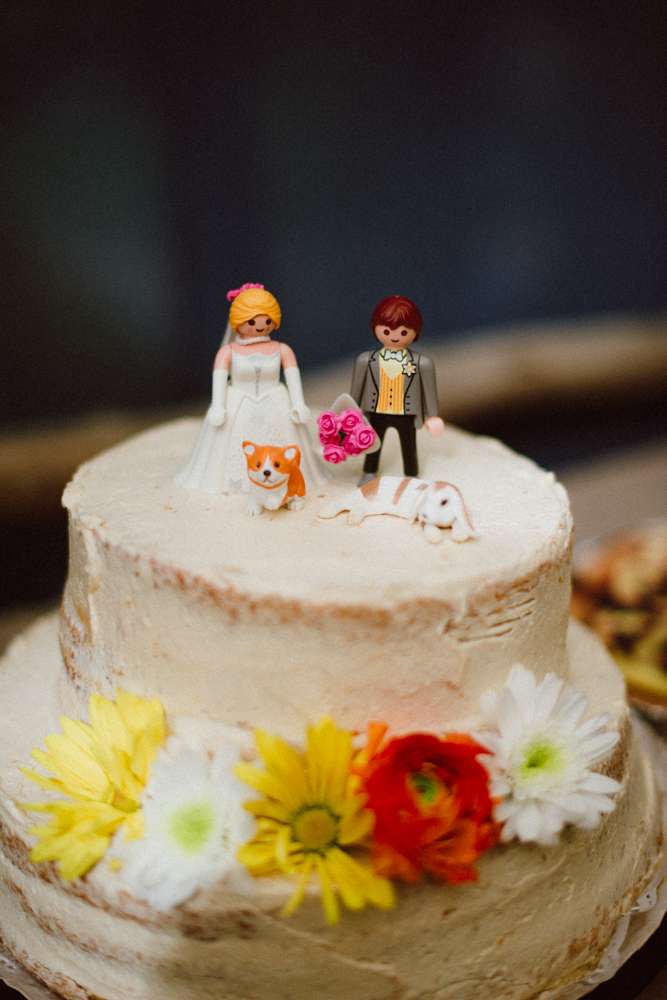 “The best thing about planning our wedding was being together, doing things for our friends and knowing that everybody was going to have such a good time that day”, she concluded. “The worst thing was not knowing who was going to be there or not, right up until the last minute we had guests confirming if they were coming or not!” 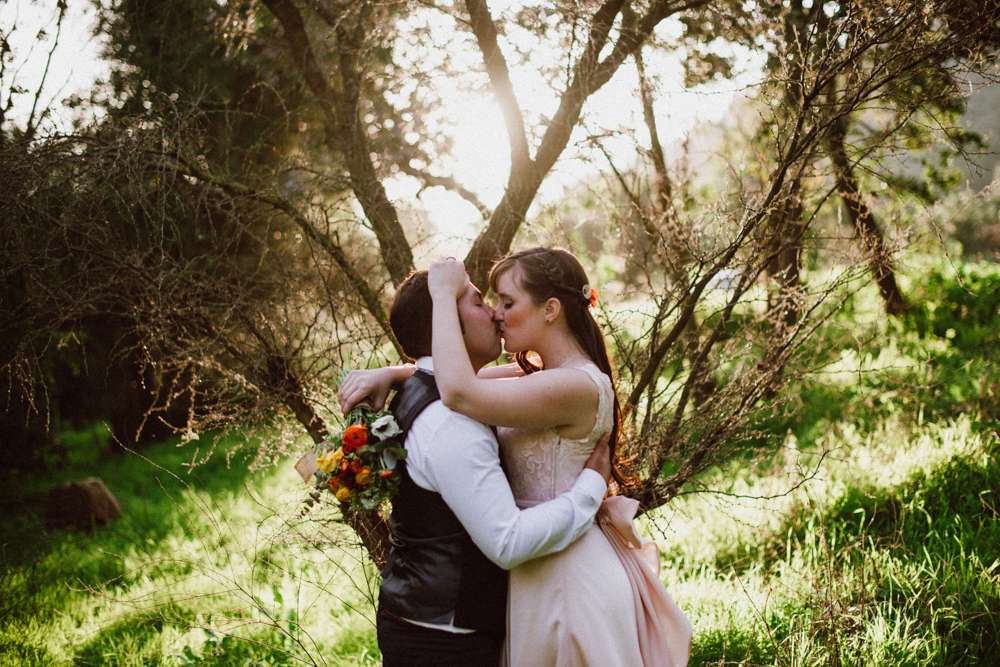 “Our advice for future brides and grooms is to try to enjoy the whole process. Enjoy every single thing about the wedding day, even the things that goes wrong. The laughter you’ll have together about it, days or months after the wedding, is amazing. In retrospect, there was nothing we would have done differently. All what we thought our wedding would be, it was better.” 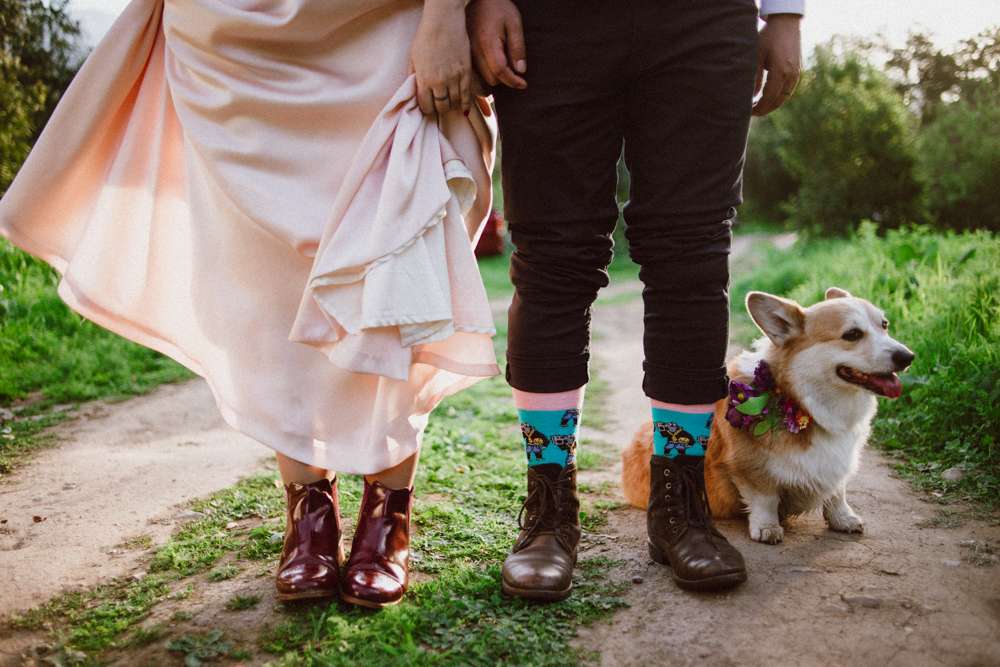 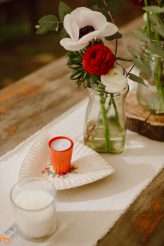 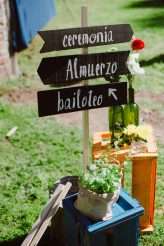 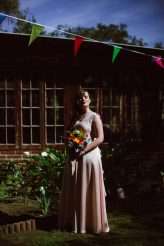 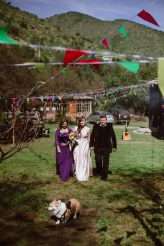 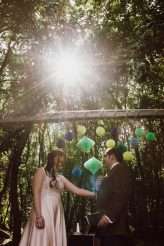 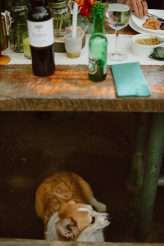 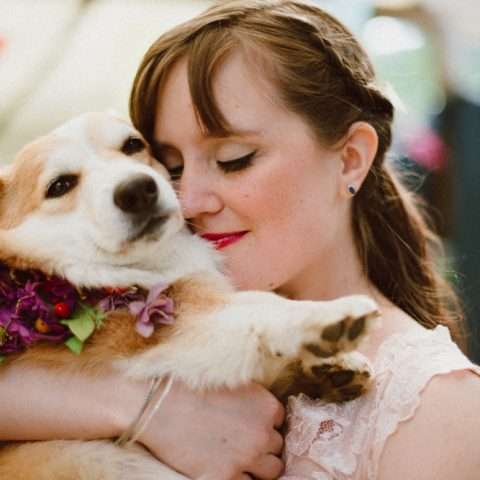 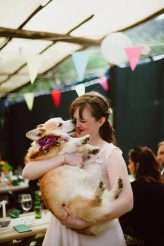 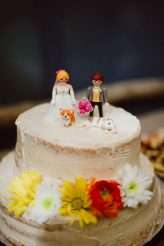 Gary and Traci love Halloween. So much so that they decided the best place for them to get married would be at their Halloween party in their own home. The coolest part of this wedding was that it was a complete surprise for all their guests! After telling everyone they were getting married then and there, they then assigned each attendee a roll in the celebration.