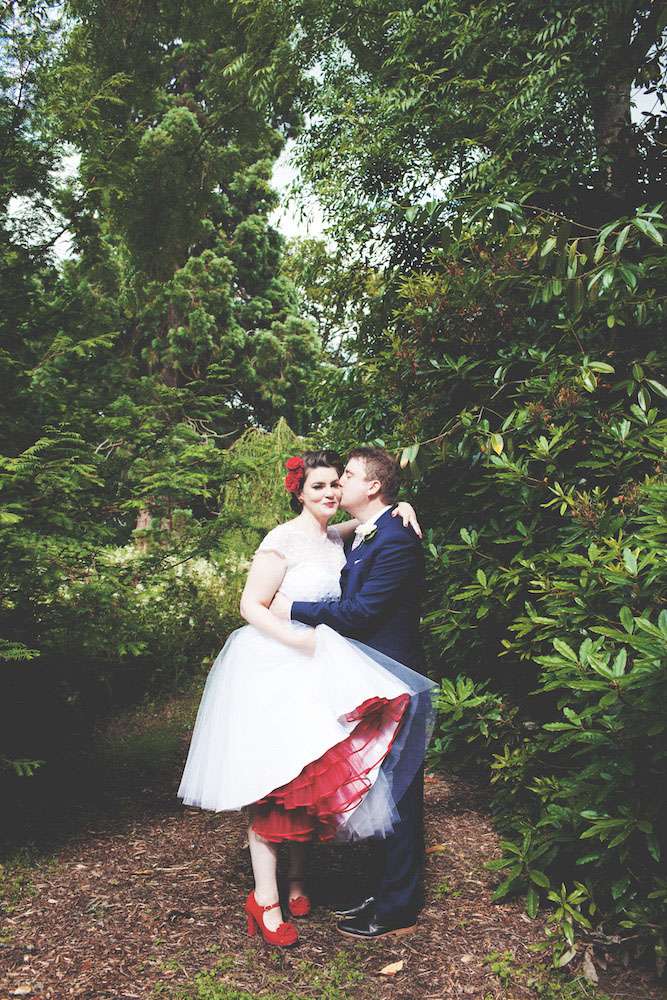 Loving all things retro, Lucy and Michael always knew that would be the theme of her wedding. When it came to actually planning their big day though, they wanted it to be unique so they threw in some colourful Mexican influences for good measure! They had a mariachi band, their decoration was colourful and they even served a Mexican inspired buffet feast! The groom’s love of The Beatles couldn’t be ignored, so the bride walked down the aisle to one of their sings and their tables were named after Beatles albums. 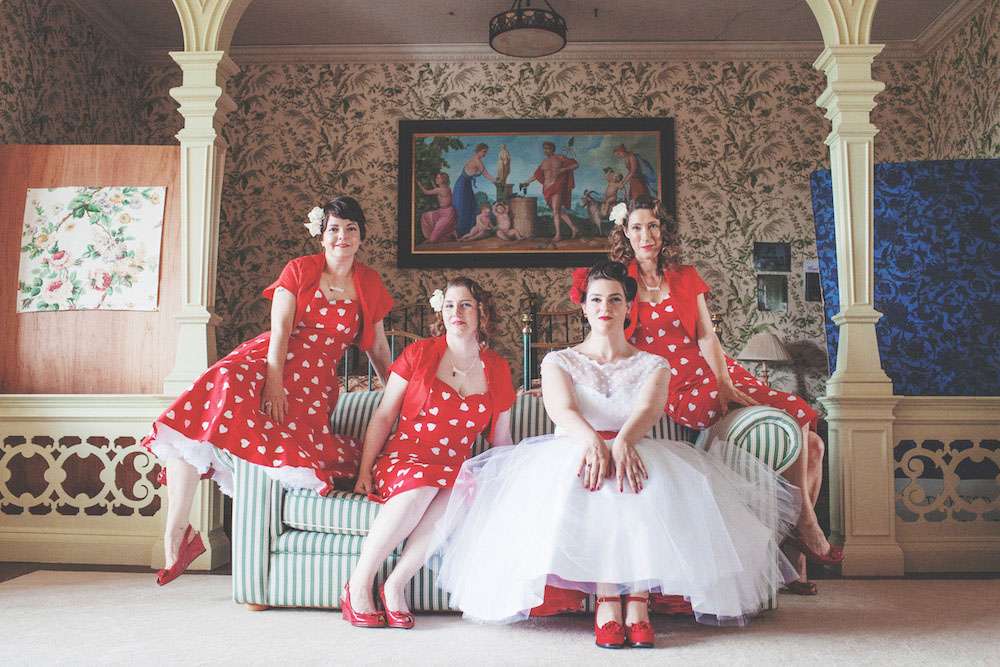 “Michael was the last of his college friends to get married, so he had always wanted the wedding to end all weddings”, began the bride, “and once I got hold of the planning I really became obsessed with the idea of creating an amazing spectacle – especially once I had stumbled across Rock n Roll Bride! The main theme was Rock n Roll Mexican but it became an amalgamation of all our varied interests and ended up being extremely eclectic!”

“We went to a Mexican restaurant for our first date and basically every meal since. We are obsessed with the food and culture but had never visited the country so we planned to have our honeymoon there. We wanted to add some Mexican inspiration to the wedding with vibrant colours, papel picado banners and Mexican inspired food.” 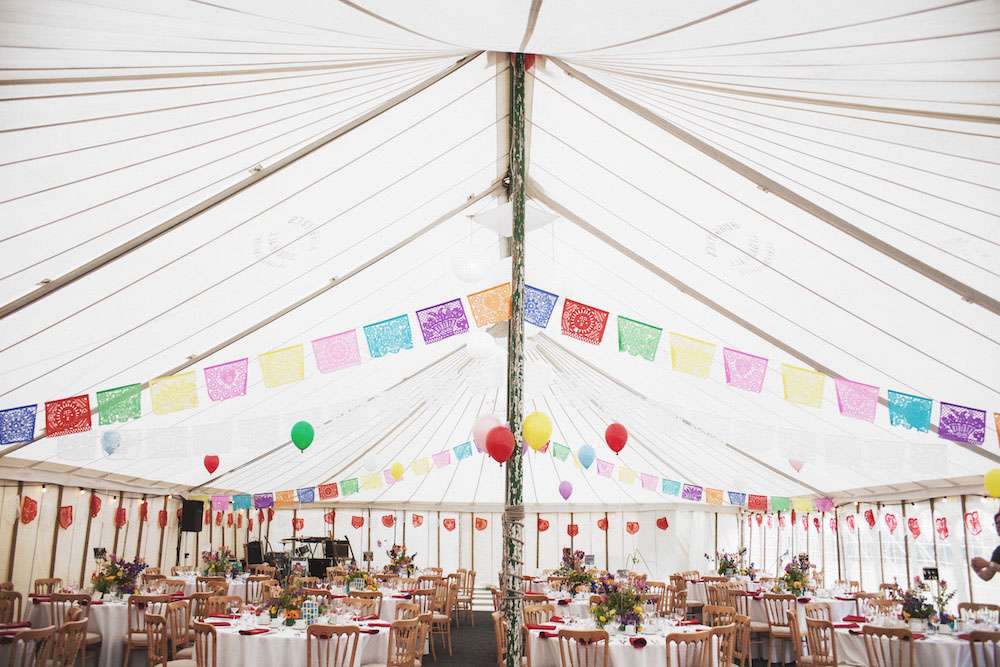 The wedding was held at Stokesay Court, where the movie Atonement was filmed. “The setting was very traditional English countryside but I didn’t want that to define the feel of the wedding”, Lucy continued. “We gave it our own twist by adding quirky touches, like a tribute to an East End pub in the marquee and having a Mariachi band welcome people as they arrived at the reception. We also added in inspiration from other areas of our lives, we worked hard on every little detail, making it very personal to us. For example, Michael is a huge Beatles fan so the table names were all Beatles albums. We bought a set of album cover postcards and used them as the table name display.” 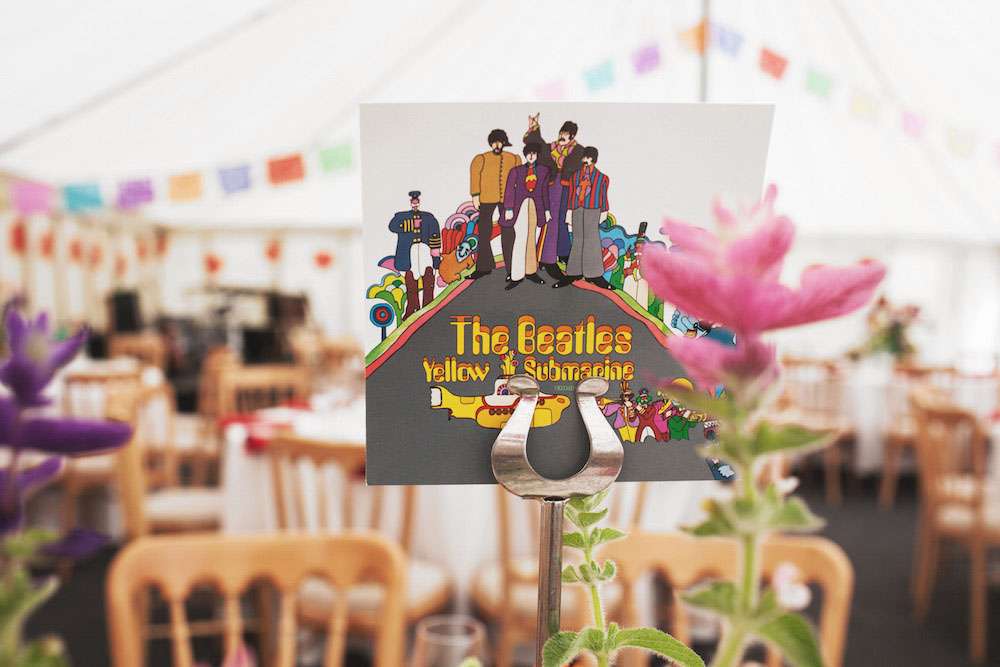 The bride wore a Candy Anthony dress, Tatty Devine jewellery and shoes from Chie Mihara. “I’m in a rockabilly band and had always wanted a full-on 50s make-over, so we had to add that element in somewhere as well, although Michael is more of a 60s mod! I found the most wonderful dress at Candy Anthony with a gorgeous cherry red petticoat. I found the perfect shoes to match. We had the incredible Le Keux vintage beauty salon do our hair and make up, which was one of my favourite touches.” 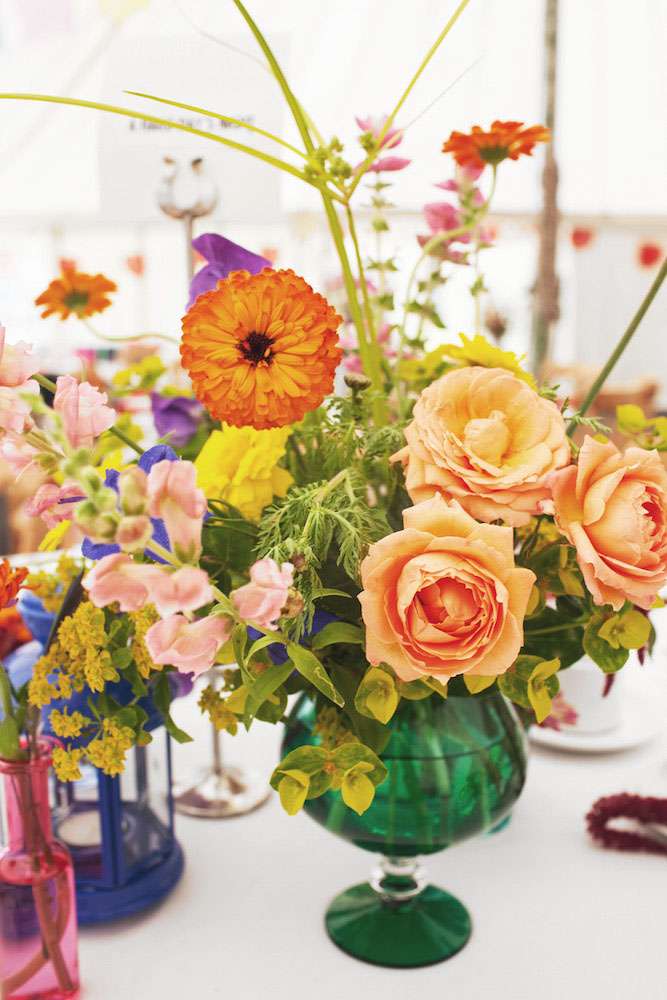 “In retrospect, there’s not much we’d do differently but everything ran horribly overtime, so in an ideal world we would have wanted the service to start earlier”. Lucy concluded. “We had the ceremony at 3.30pm, which meant that we really had to cram everything and there was no room for timing errors. It meant that people didn’t have to wait around for food or drinks for too long, although, we had been give a strict curfew for the music to end at midnight but the band went on way later. Everyone was having such a wonderful time that it didn’t matter in the end, but it all had to end abruptly soon after the grand finale of Michael dressing up in his Stag outfit as Paul McCartney from Sgt Peppers to sing ‘All You Need Is Love’. It was quite something!” 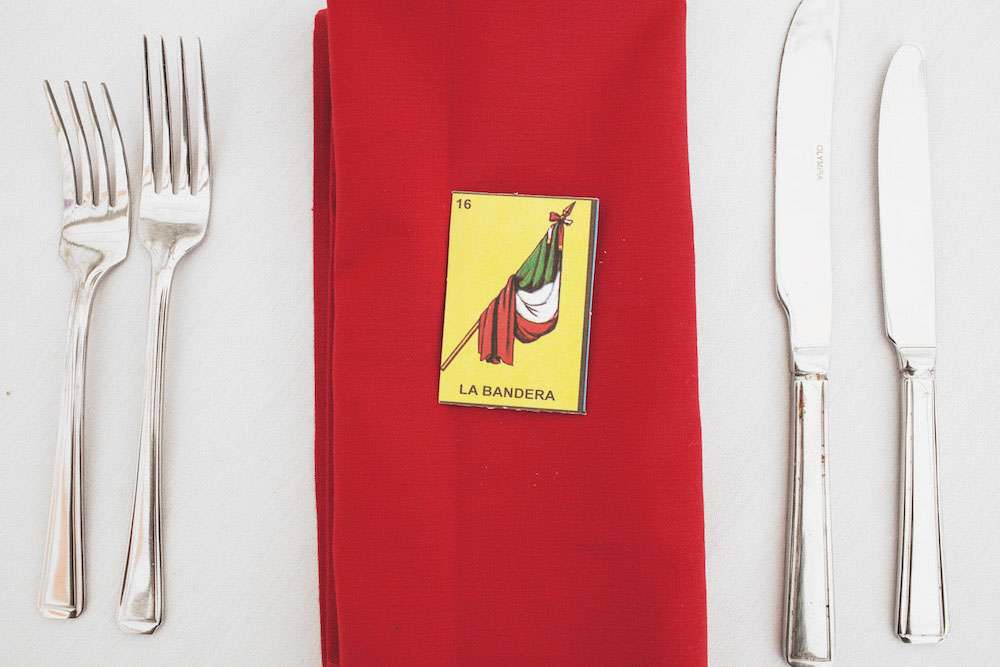 “Our wedding was the most wonderful day, everyone was saying that it was the happiest wedding they had ever been to. The dance floor was always heaving and we danced with wild abandon. It was absolutely magical. I’d like to add an additional thanks to Kat for all the inspiration and advice on Rock n Roll Bride. Once I came across the blog during the planning stages it was a revelation! I had never been one of those girls to dream of my wedding for my whole life so I was thrilled to see that I didn’t HAVE to go for the traditional trappings. You helped to give me the confidence to create a new wedding dream and be confident in my vision.” 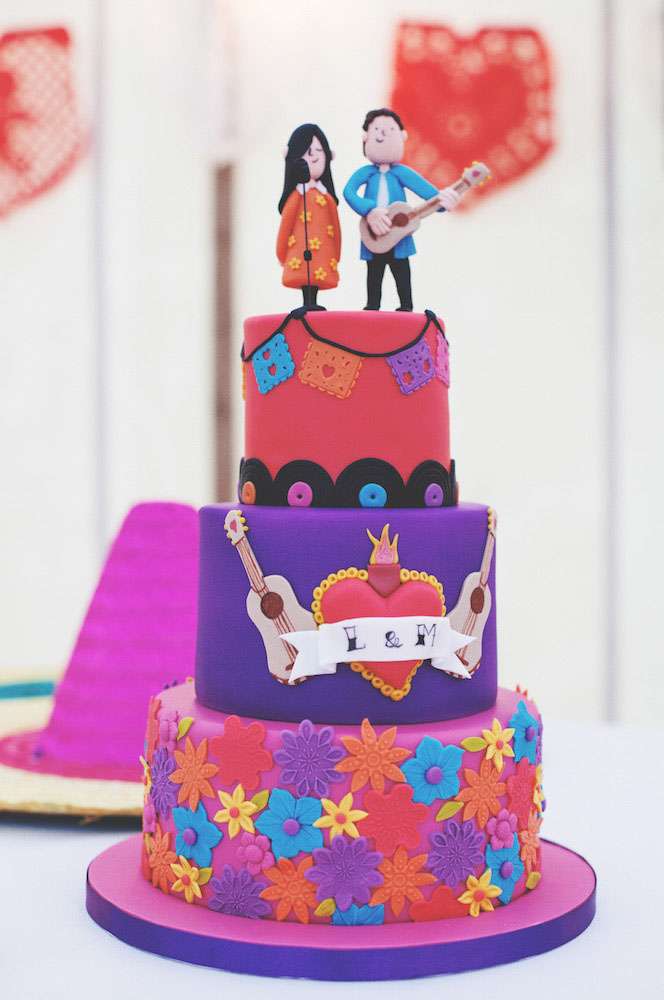 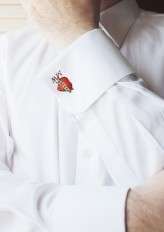 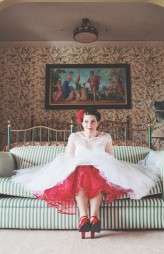 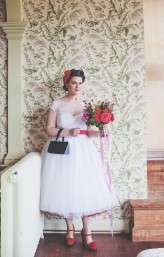 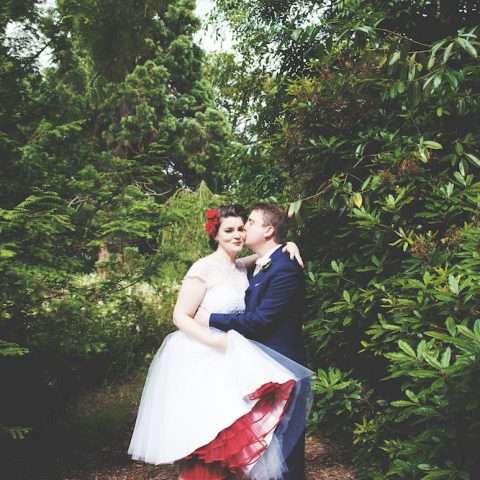 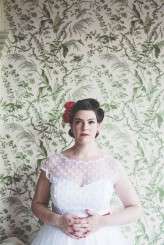 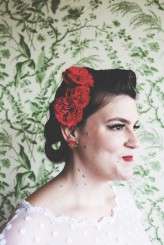 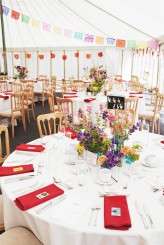 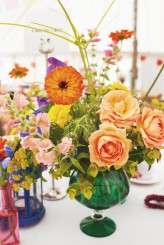 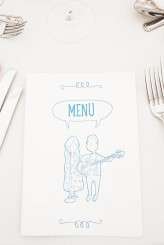 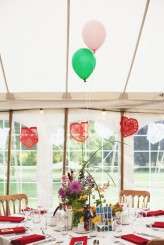 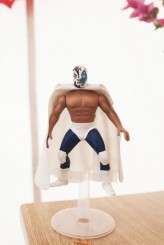 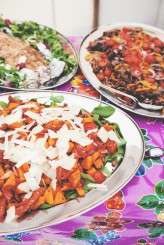 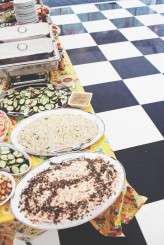 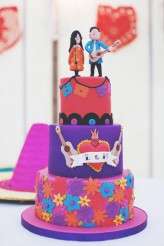