Sequoia and Andrew were married outside, in the Oakland Hills. Their wedding was a true DIY affair and they did everything themselves including all the décor, flowers, stationery and the catering. Even the band was made up of the bride’s step-dad and step-brother!

“Our wedding was a DIY Mexican boho wedding”, explained the bride. “More than anything we wanted to have an intimate setting to exchange our vows. It was really important to us that we be surrounded by love and support. We know that with marriage comes struggle and hardship at times, and we wanted to be reassured by our loved ones that they would be there to remind us of our wedding vows. The way we looked at each other. The promise that we made.” 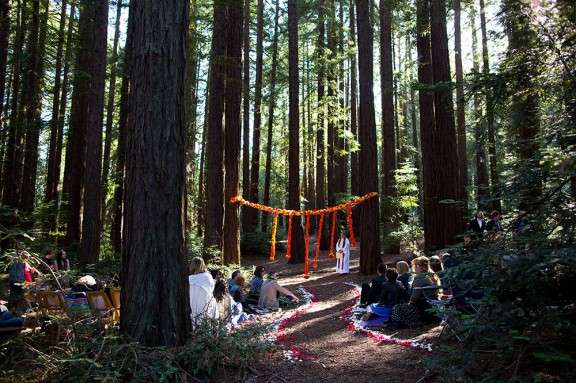 “Having my step-dad, and step-brother play the music was really special”, she continued. “I didn’t want the traditional wedding music, we are far from traditional. I asked them to play ‘Sleepwalk’ by Santo & Johnny as I walked down the aisle, and they learned it and nailed it.”

“Instead of chairs we laid out Mexican blankets in the middle of a Redwood grove, forming a circle with us at the top. We felt like it really connected us with our friends and family. After the ceremony, we had a champagne toast and some snacks before heading to the venue for an all out PARTY.” 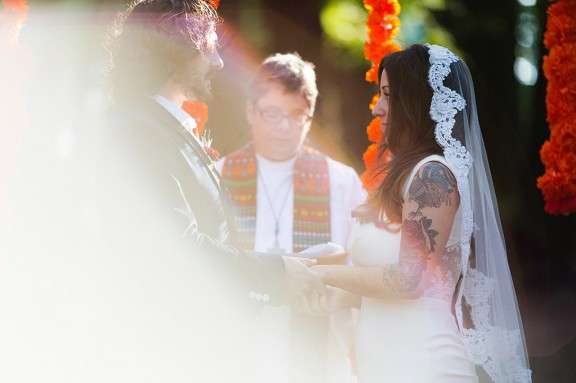 The reception was held at Starline Social Club, in Oakland. “In true Andrew and Sequoia fashion, we were setting up until 1am the night before the wedding”, the bride laughed. “I would never recommend this to anyone, but it worked for us. I was at the venue with my bridal party, stringing Mexican Papel Picado that I bought in East Oakland, ironing all the table cloths that I had thrifted with my mom, setting up the music, and arranging the bar. Andrew was in the kitchen preparing all the food. It really could have ended up being a disaster but when we walked in, hand in hand, all married and everything, it was PERFECT. I burst into tears seeing everyone, as I reached for a giant glass of champagne! My work was done!!” 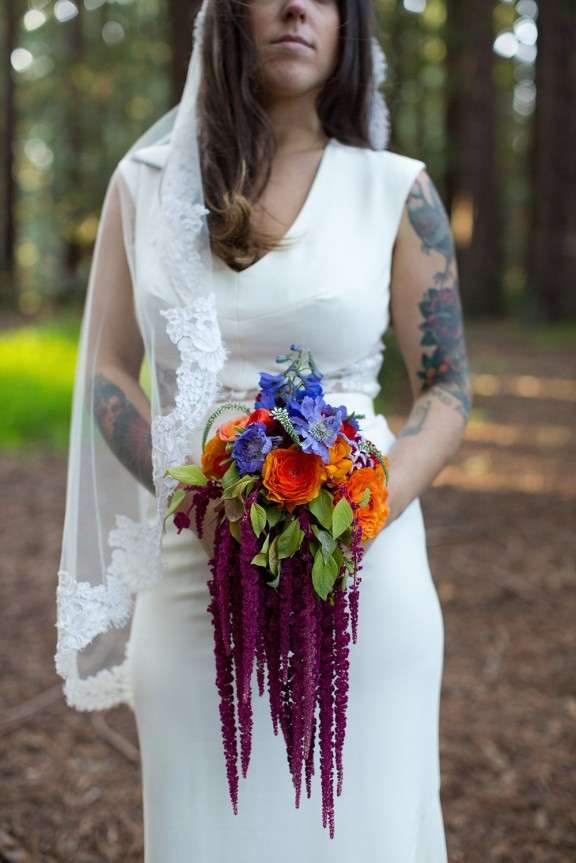 “The one thing I wouldn’t do again, was that we did all of our own clean up ourselves. However everyone wanted to come over to our place to see us, but we put a sign on the door and said that we were at the venue. And then slowly, everyone started to show up to help us! We ate bagels and drank leftover champagne, while we cleaned for hours. I really have to thank everyone for this part. We couldn’t have done it alone. My brother mopped the whole venue. The best man’s dad washed every last plate. It was a true blessing. We were so lucky to have such an amazing group of friends. It turned out to be really fun, even though we were exhausted.” 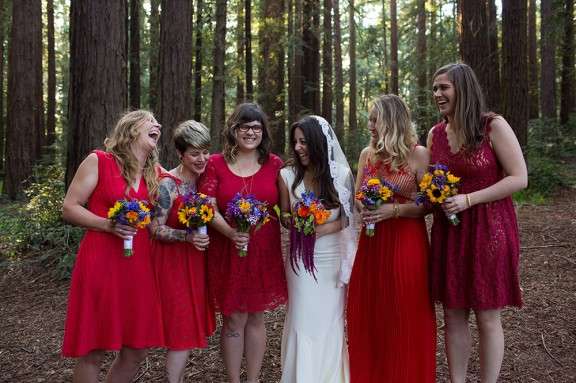 “My advice to other couples would be to be true to yourself”, she concluded. “Don’t get caught up in other brides and what they are doing. Everyone advised us against doing picnic style seating, and having our reception in the HOOD, but it was perfect. Because it was US. Enjoy the time as you plan and don’t stress yourself out. Make lists and don’t wait until the last minute. But mostly, remind yourself why you’re getting married, and cherish it.” 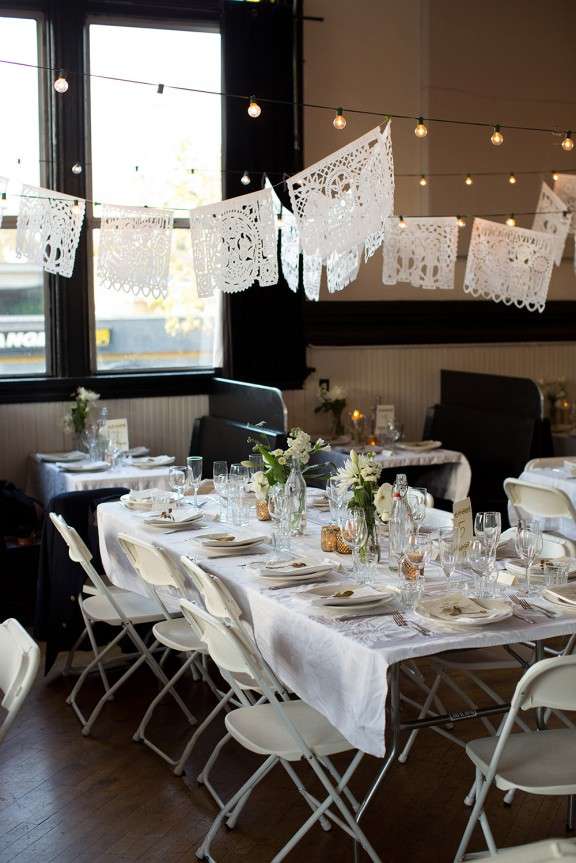 “Something I did that came to me at the last minute, was I donated all the flowers the next day to the Oakland Children’s Hospital. They were already in jars from the tables. They were so happy to receive them, and it made me feel really good.” 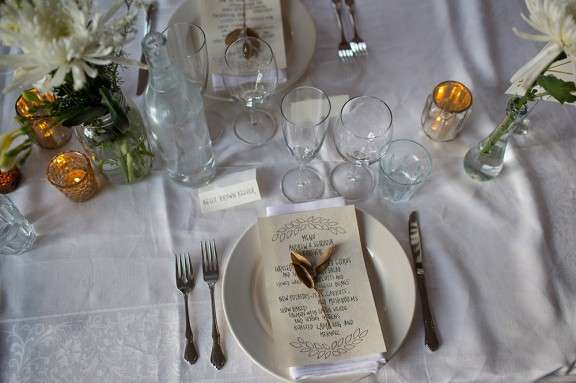 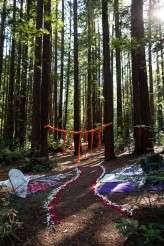 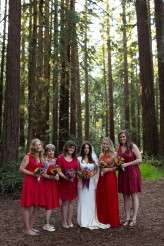 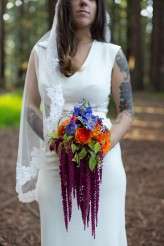 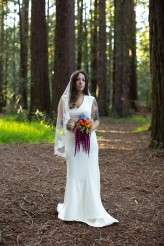 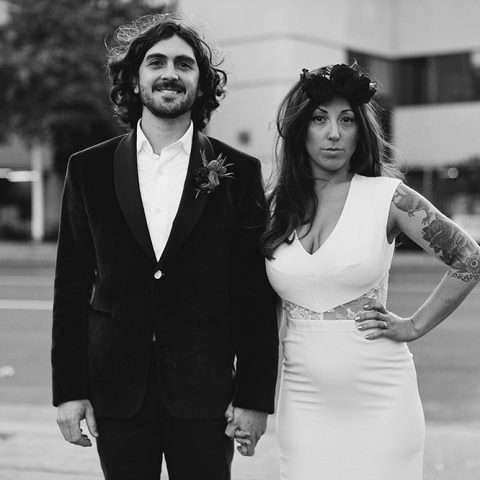 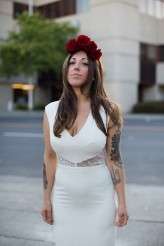 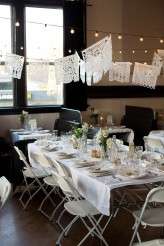 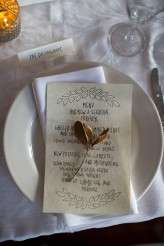 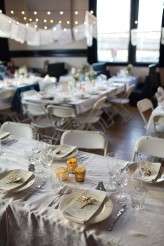 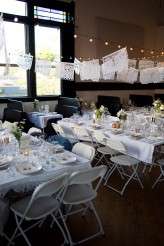