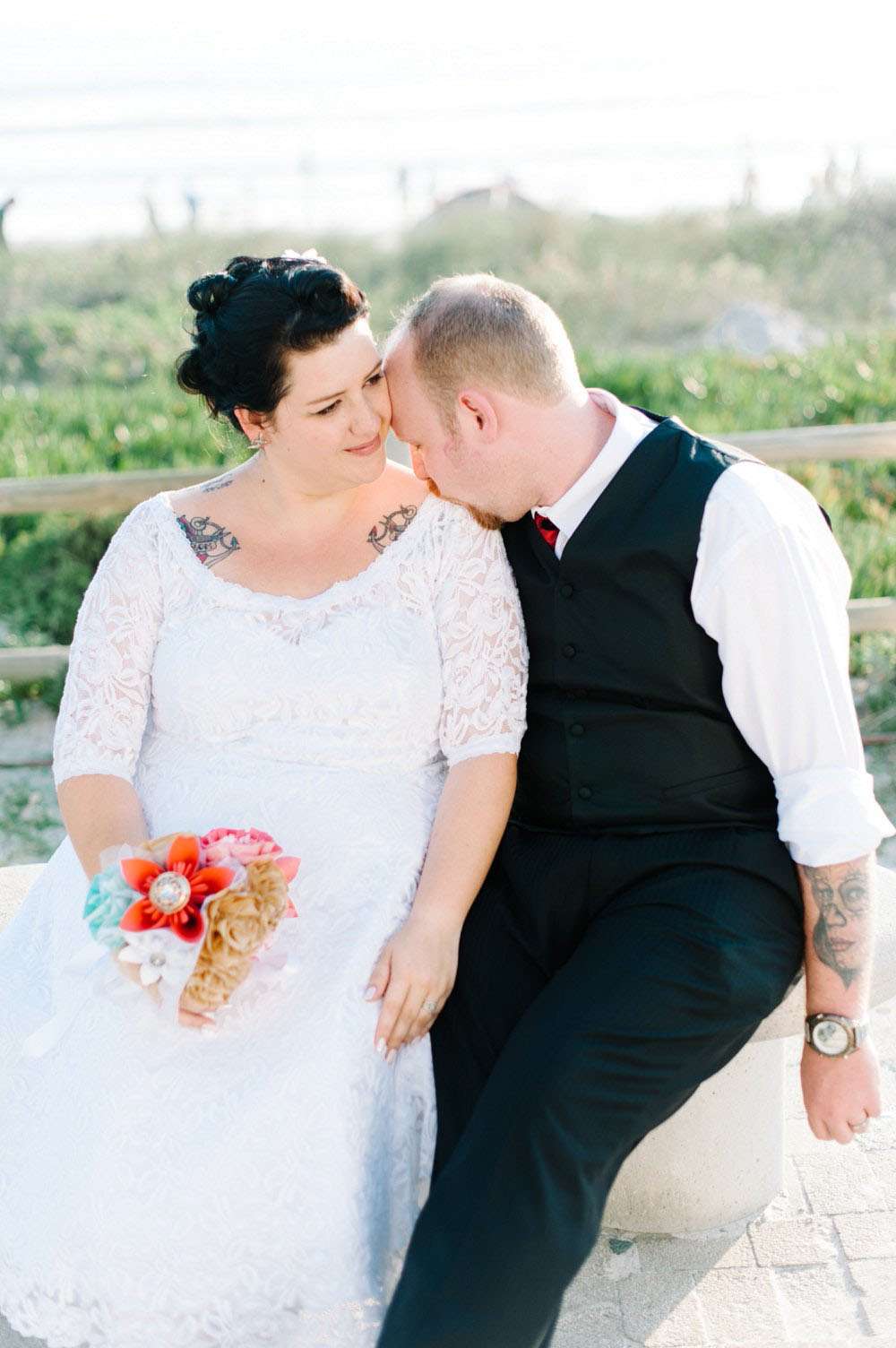 Bianca and Richard’s wedding was held on Big Bay Beach in Cape Town. This was very definitely a family affair with the bride’s mother making the stationery and helping Bianca fold all those paper origami flowers, and both her parents helping with the catering. Most of the reception décor was borrowed from people they knew or bought cheaply in China Town. 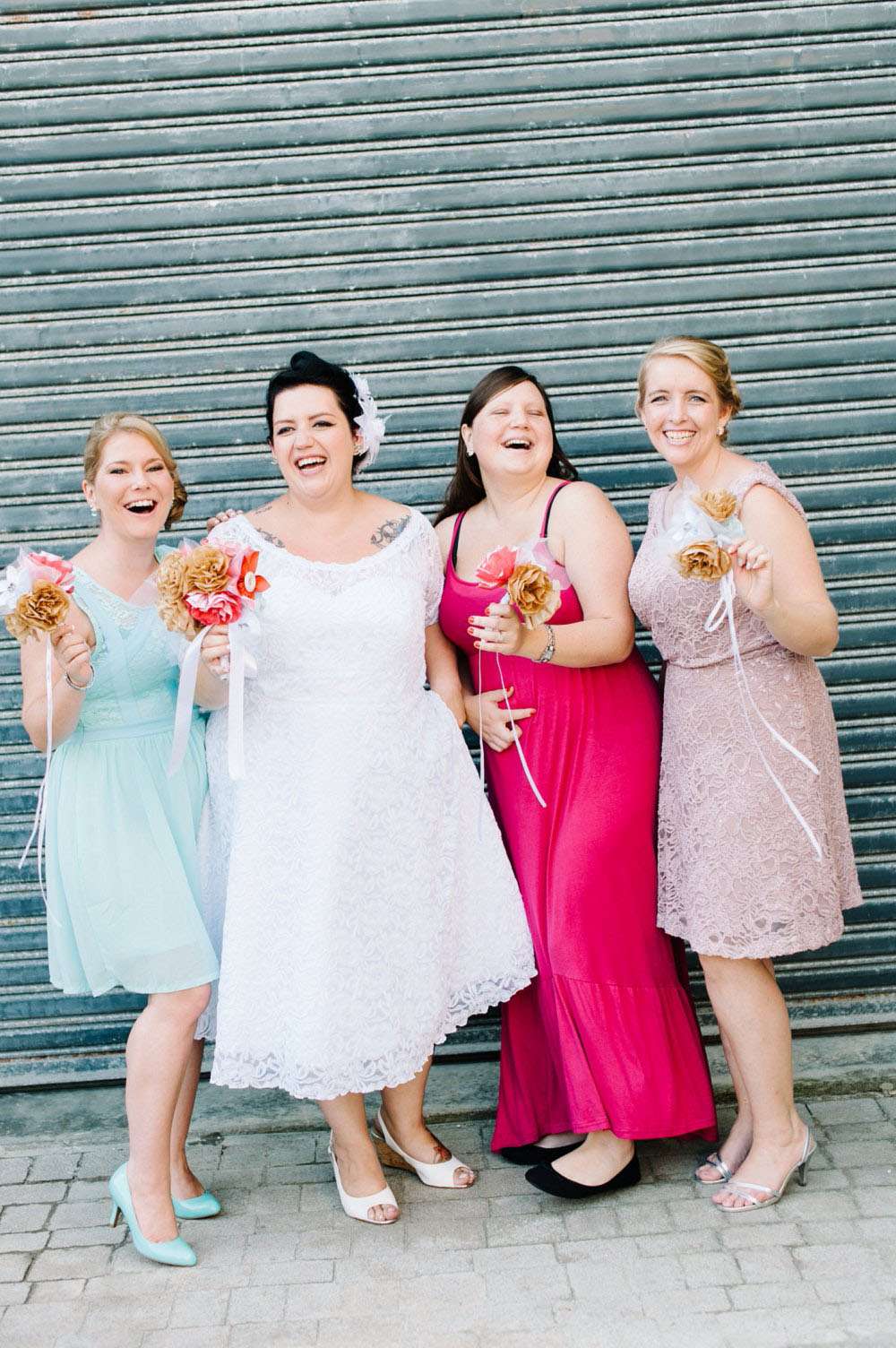 “We wanted our wedding to be a representation of us not just a mere traditional wedding”, the bride wrote. “Firstly we wanted food we loved and enough of it for people to go back for seconds. We also wanted to make it as easy breezy as we could, so we had no formal sit down dinner and we wanted the guests to get involved and make something they enjoyed. My parents made the starters of pate, cheese and crackers, and Riaan’s Foods made us an incredible DIY burger station with all the toppings you could wish for accompanied by potato salad and coleslaw. They also did dessert ice cream sundaes, doughnuts and a chocolate fountain with marshmallows!” 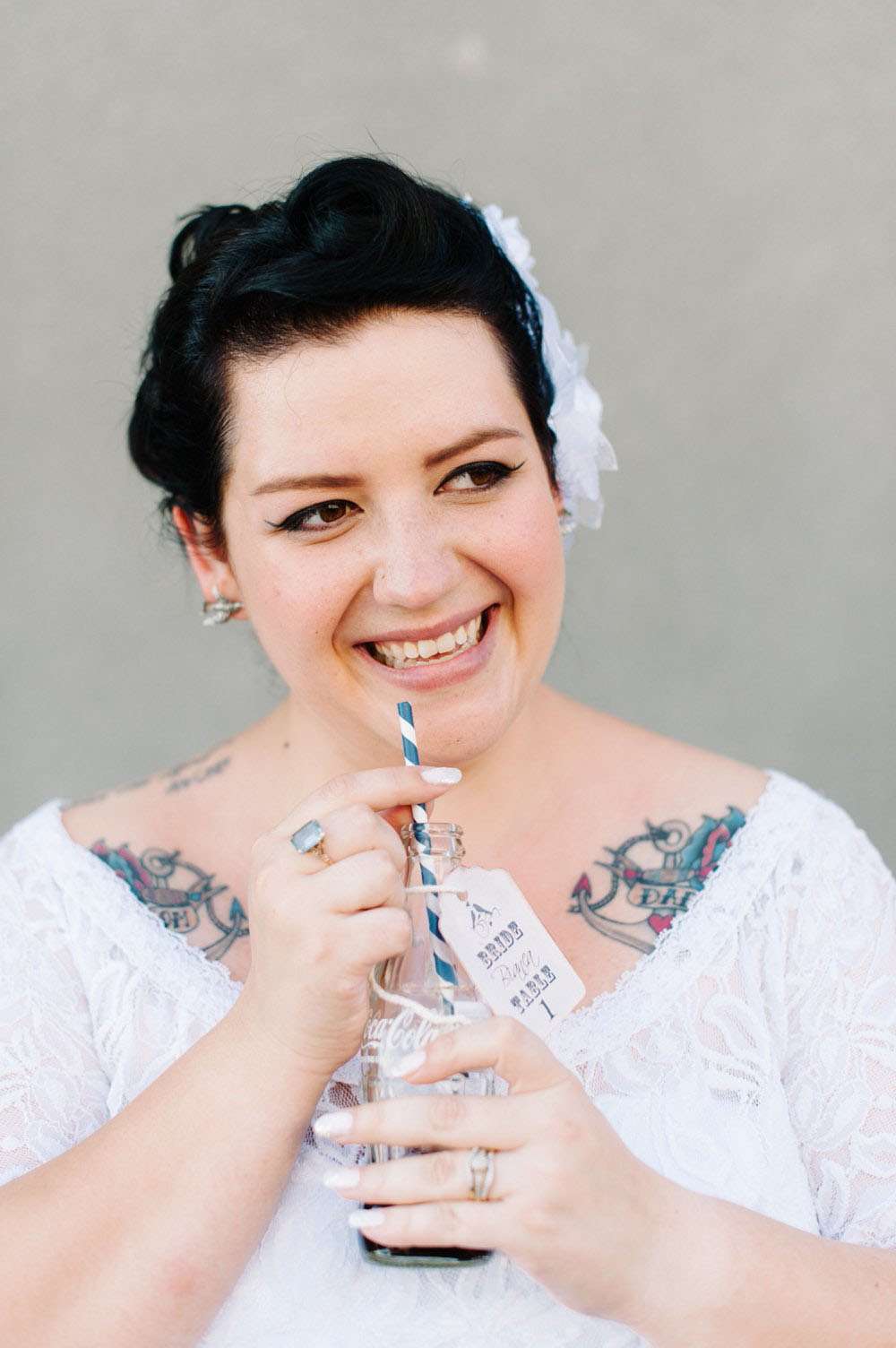 “I never really wanted flowers,”, she continued. “I always felt it such a waste to cut up a bunch of beautiful flowers for one day and in most cases they’re thrown away not too long after. What a waste. So we made paper flowers for the bouquets, tables and tie backs. We had no confetti either as we didn’t want to litter.”

Bianca’s gorgeous dress was made for her by a local dressmaker who works from home. “I specifically wanted a wedding dress to show off my tattoos as I am proud of my ink. I wanted it to be flattering and pretty for my figure, so I chose a tea length lace dress with a boat neckline and based the design off of a dress I’d seen Kat wear in one of her shoots!” 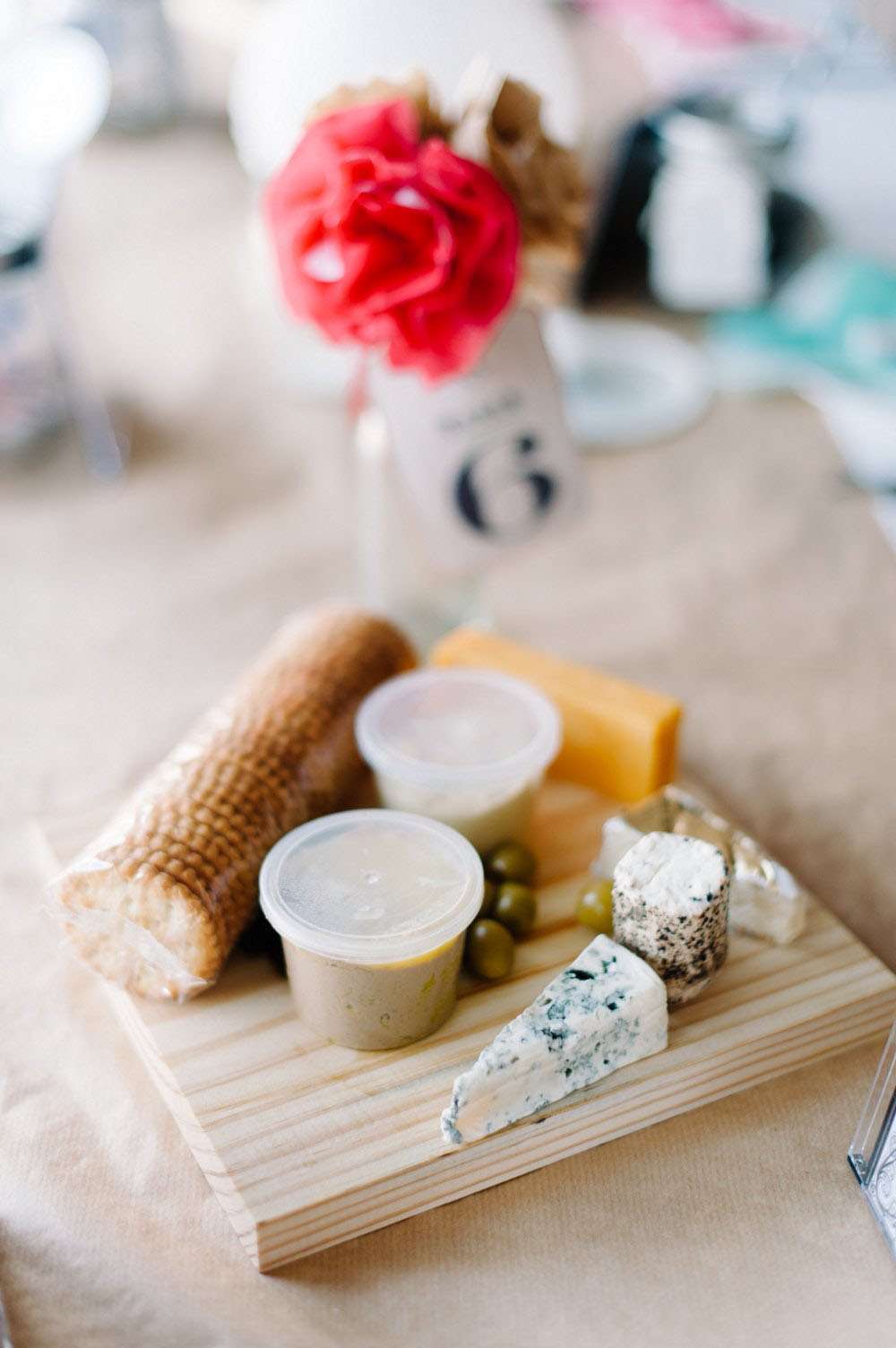 “I wore wedge heels as I am useless in high heels then changed to cute red flats for dancing. The groom and best man’s boutonnieres had Star Wars pins on them. My hubby was very sure what he wanted for our wedding cake and decided on this wholeheartedly by himself! The Storm trooper helmet and Metallica groom and Lord of the Rings reading bride fit us to a T! The guests loved it too. It was a very simple easy going day filled with our loved ones, tears and loads of laughter.” 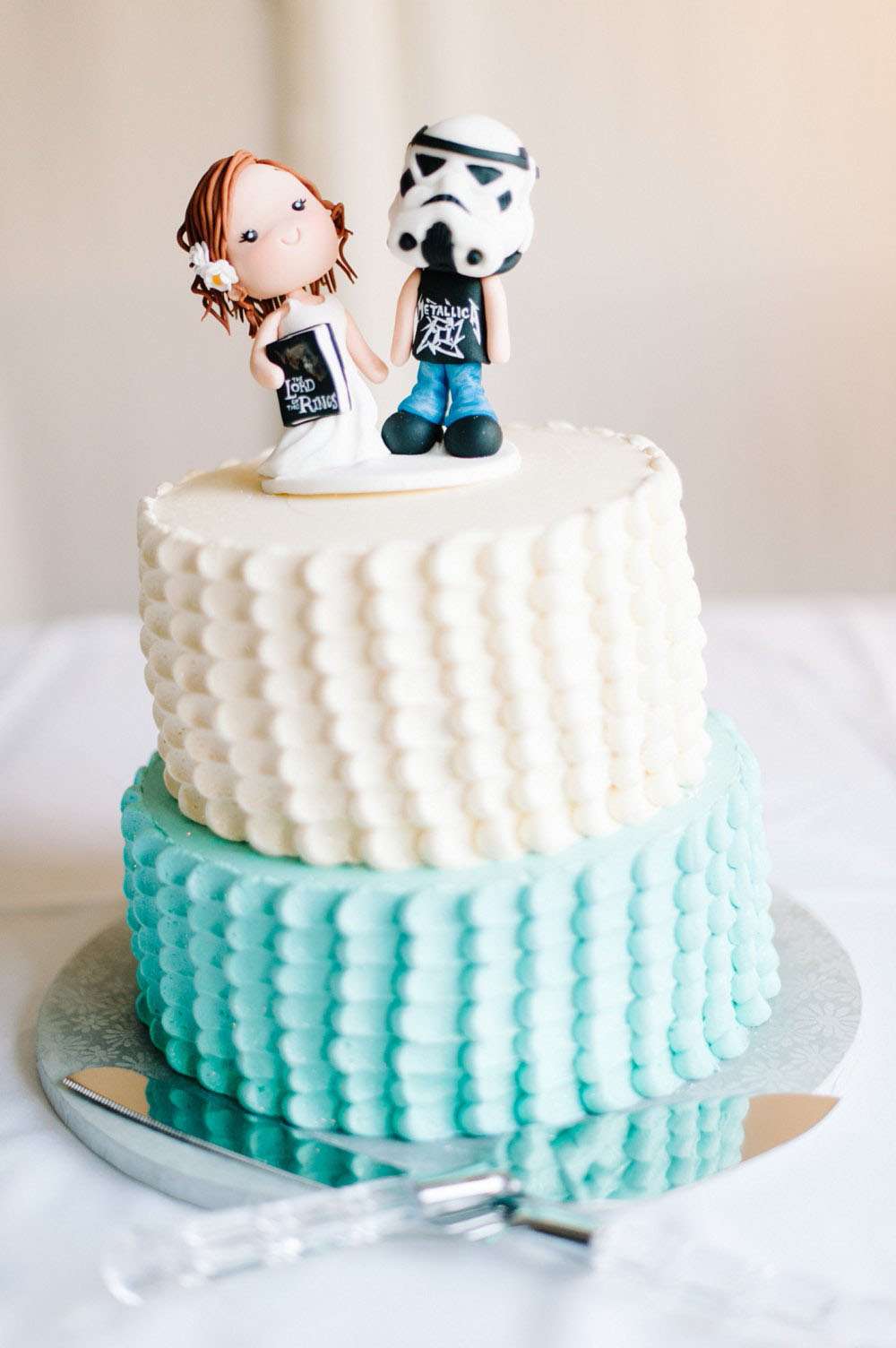 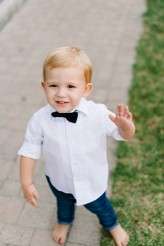 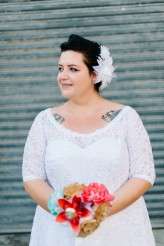 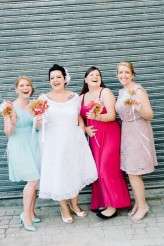 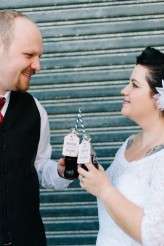 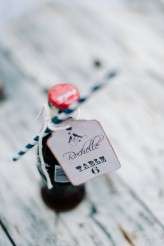 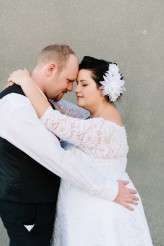 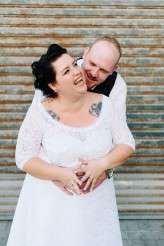 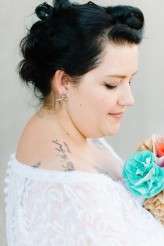 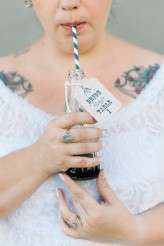 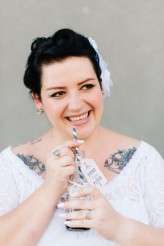 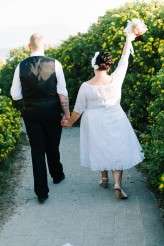 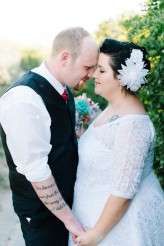 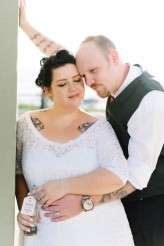 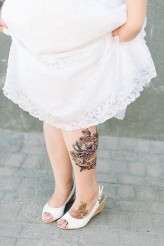 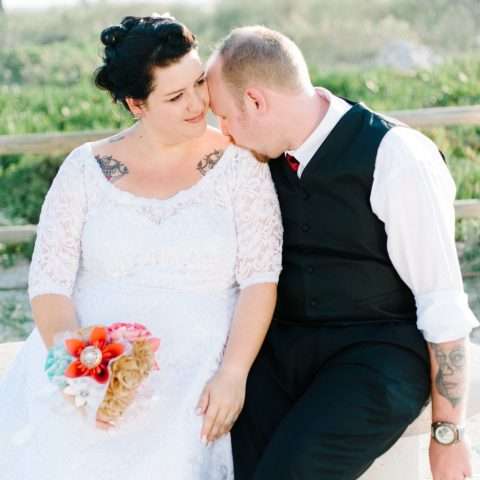 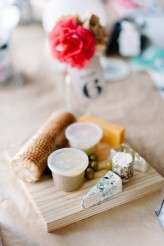 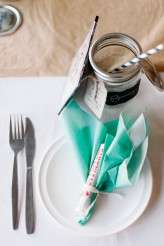 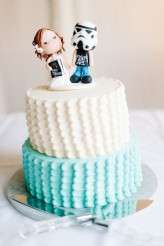 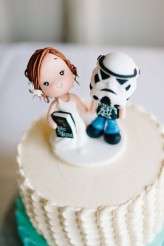 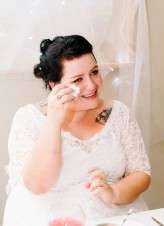 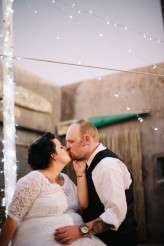 Chanel and Ray's South African wedding was a quirky affair implementing their favourite colours... plus dinosaurs and lots of other things they love!

If you're a lover of colourful weddings then baby you are going to flip your lid over Catie and Joe's big day... especially the bride's incredible outfit! Pink brows to match her hair? Hell yeah! we have so much love for this! They were married in April in New Jersey. They wanted a wedding that celebrated them but also included their daughter, Annabelle (Catie even held her in a sling during their vows - so sweet!)

Ali and Werner's South African wedding was eclectic but with rustic touches. They mixed and matched everything but planned it all to suit their venue, Black Horse Breweryin Magaliesburg.