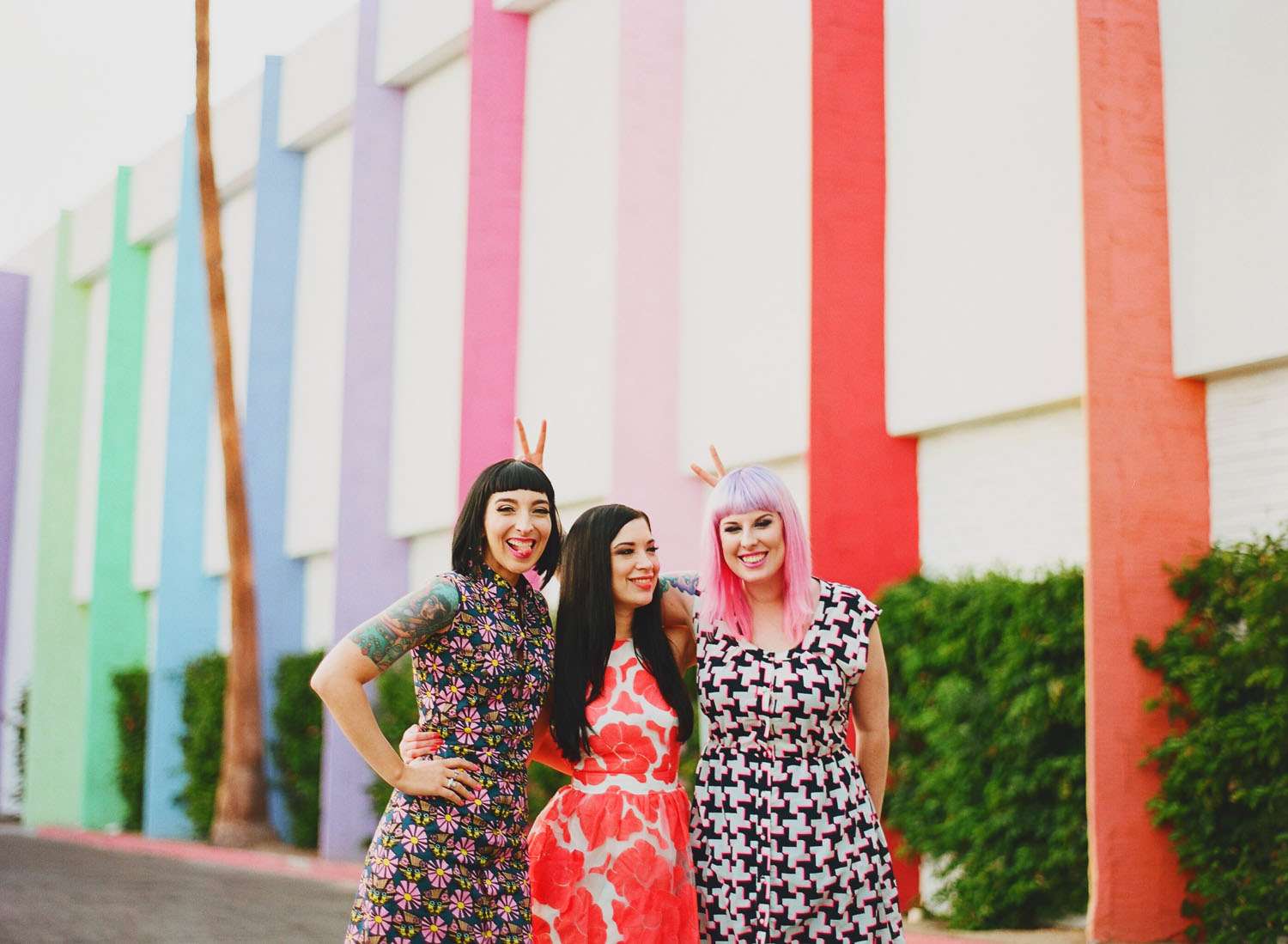 One of the highlights of my recent trip to Palm Springs was visiting The Saguaro, the famous rainbow hotel. In fact our friends Allie and Christina booked in here just so we could stop by and take photos!

When we pulled up outside for the first time I actually audibly squealed. I couldn’t quite believe that its rainbow striped façade was real. You’ve gotta love a hotel that doesn’t take itself too seriously.

Located on Palm Canyon Drive the surrounding area was also really great, with a well stocked supermarket just across the road. It’s also only a short 10 minute drive from the airport and the iconic Marilyn statue (Palm Springs is teeny tiny). Everywhere you look the majestic San Jacinto Mountains punctuate the horizon. 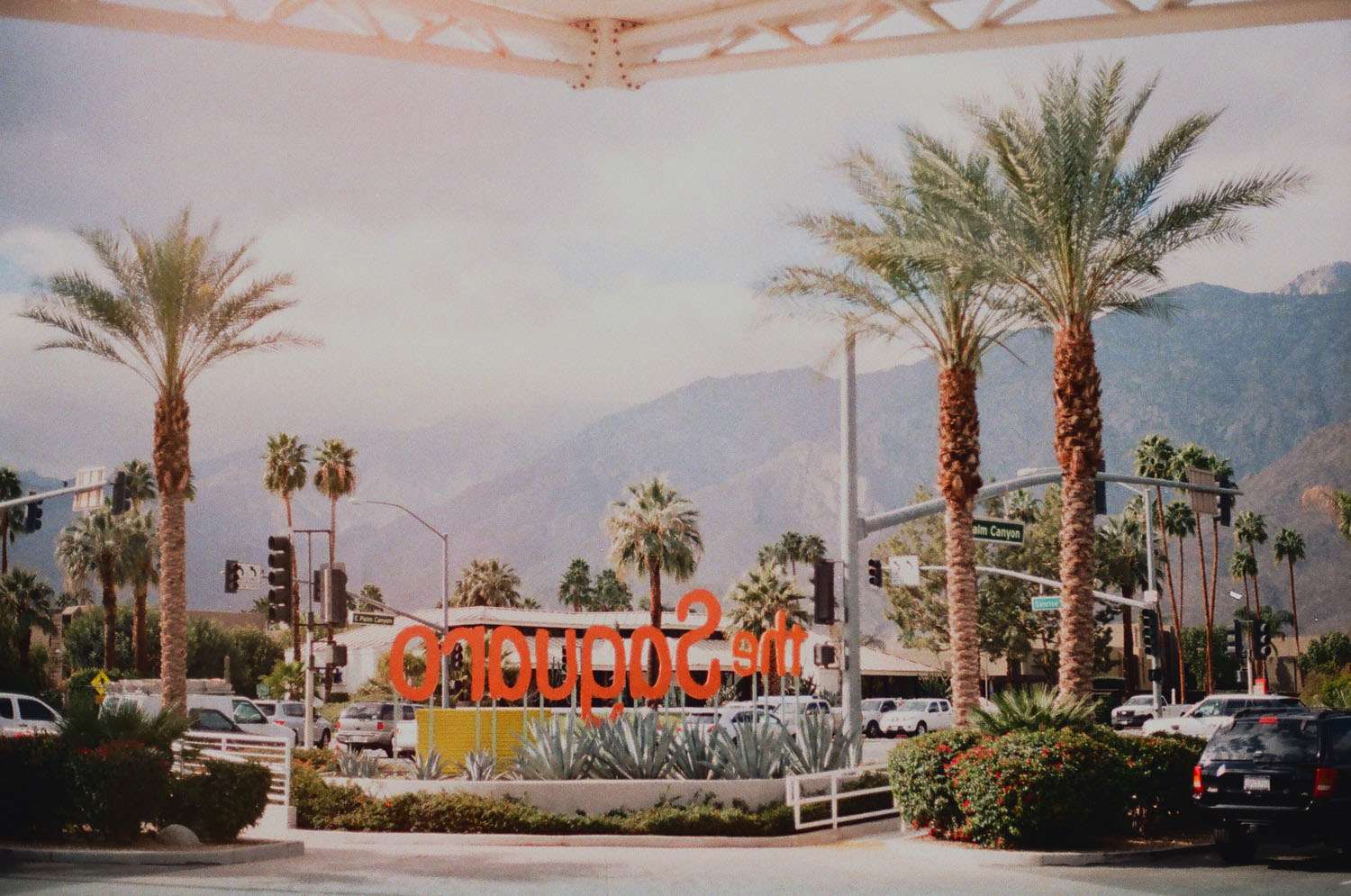 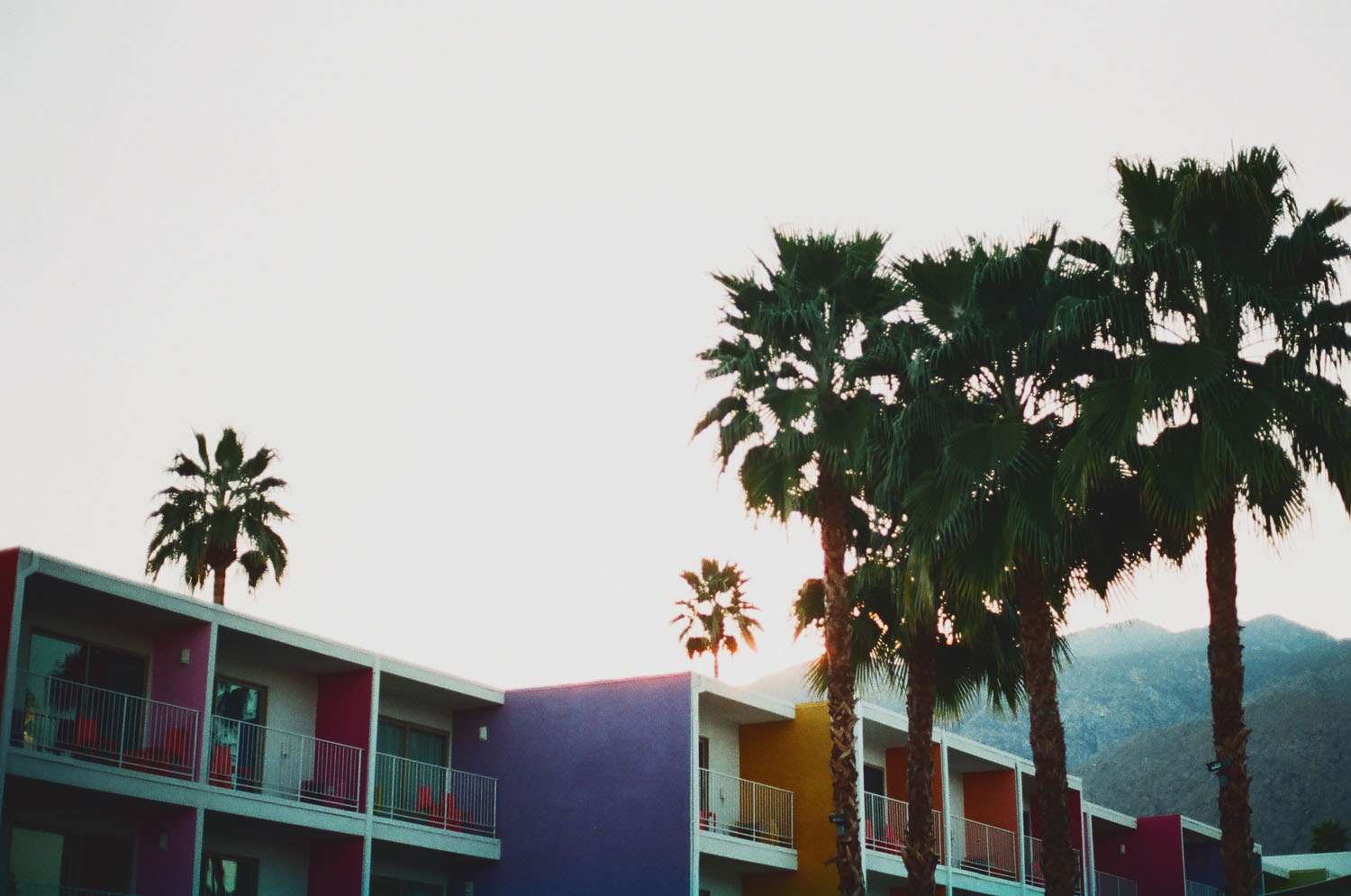 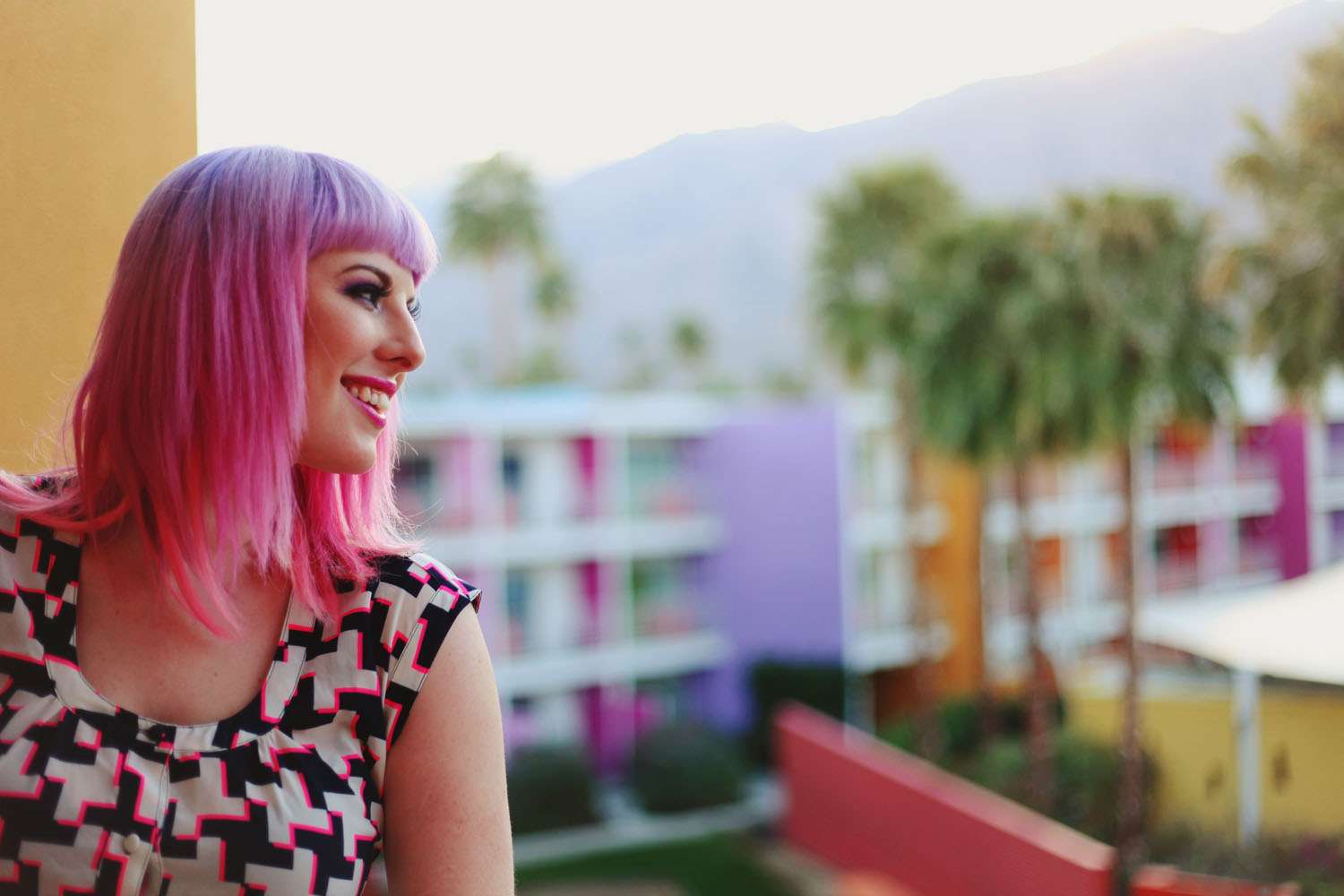 I mean, goodness, talk about my idea of heaven… 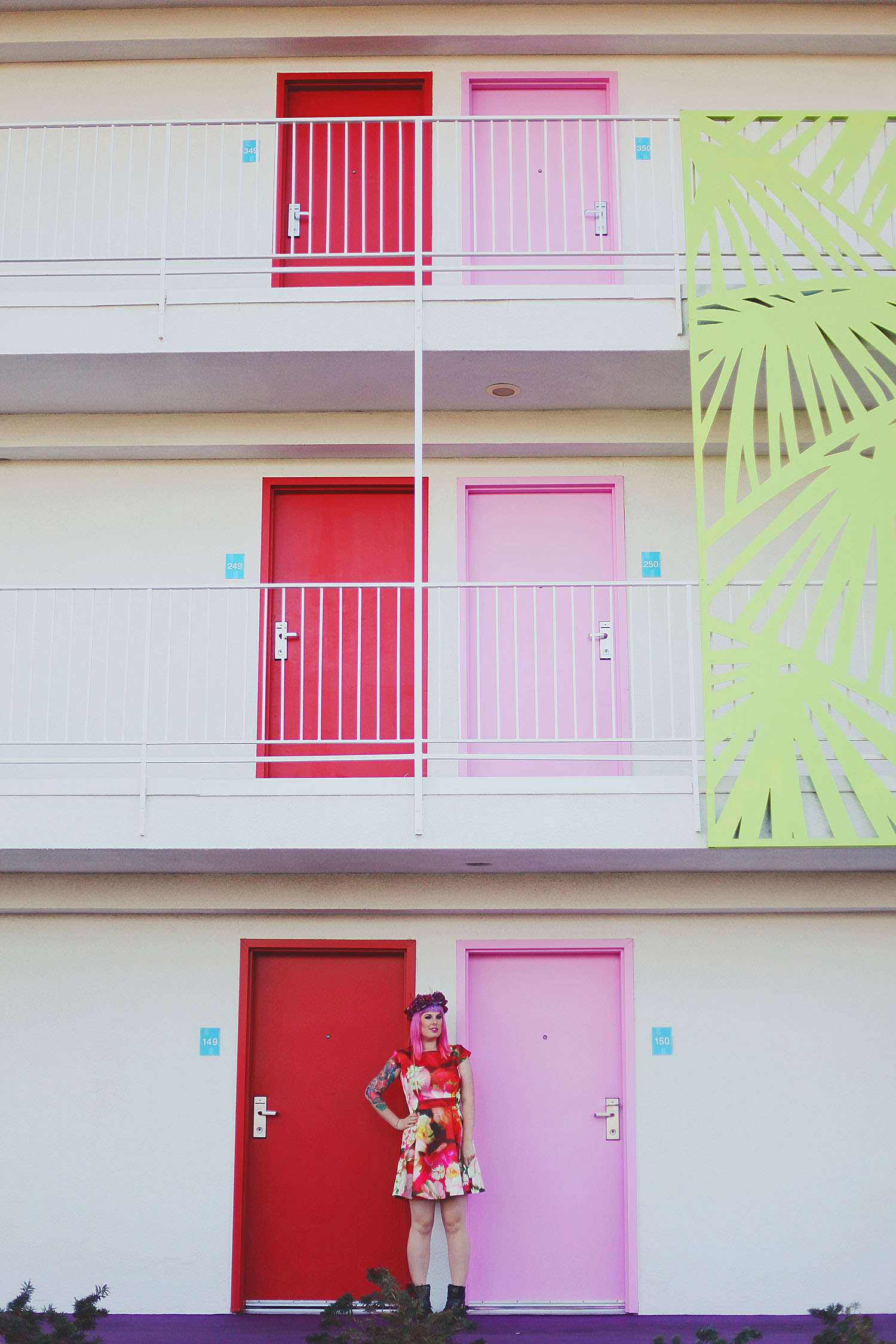 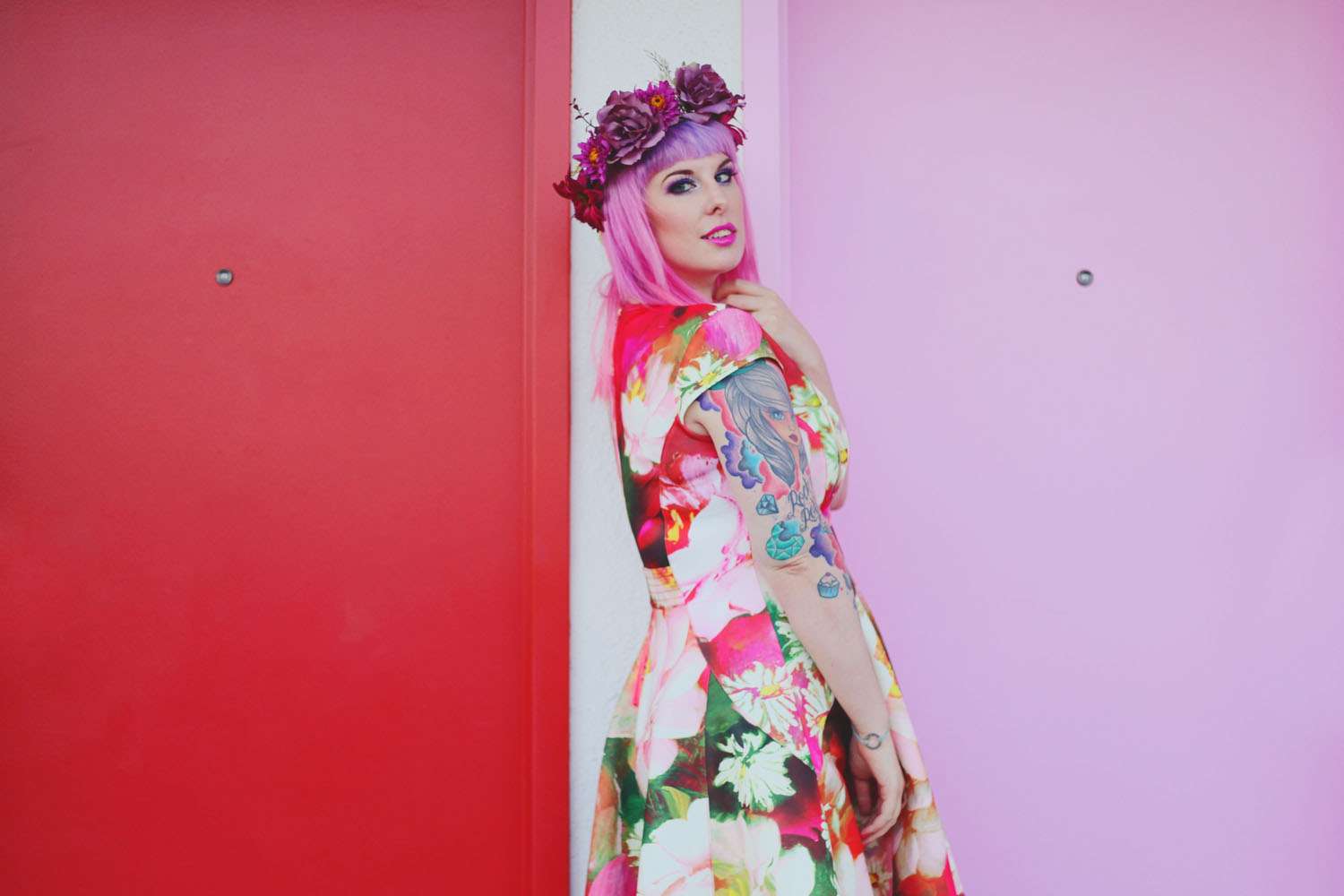 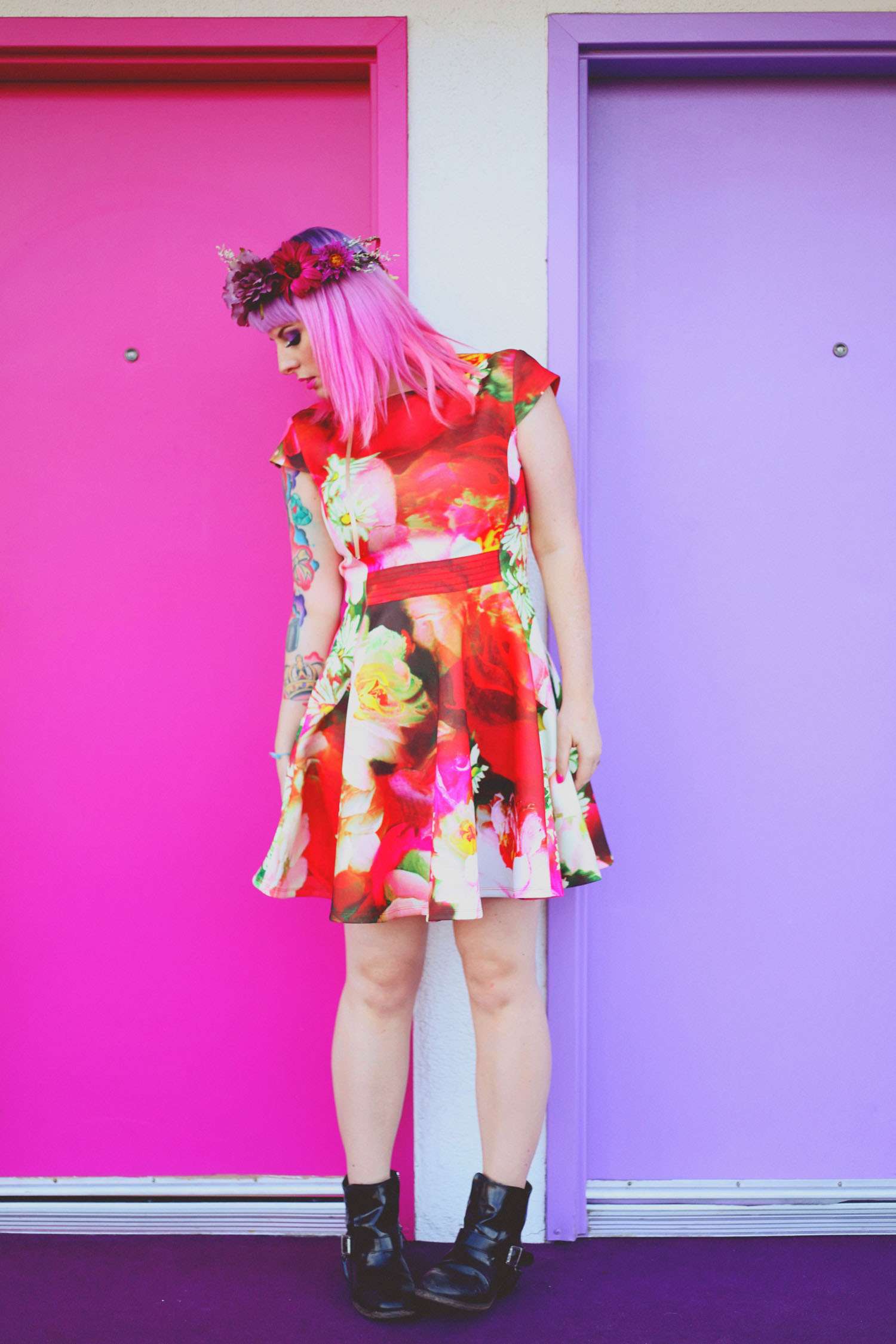 Damn why don’t I have pink and purple feature walls in my house?! Aren’t they the most perfect colours for taking portraits against? 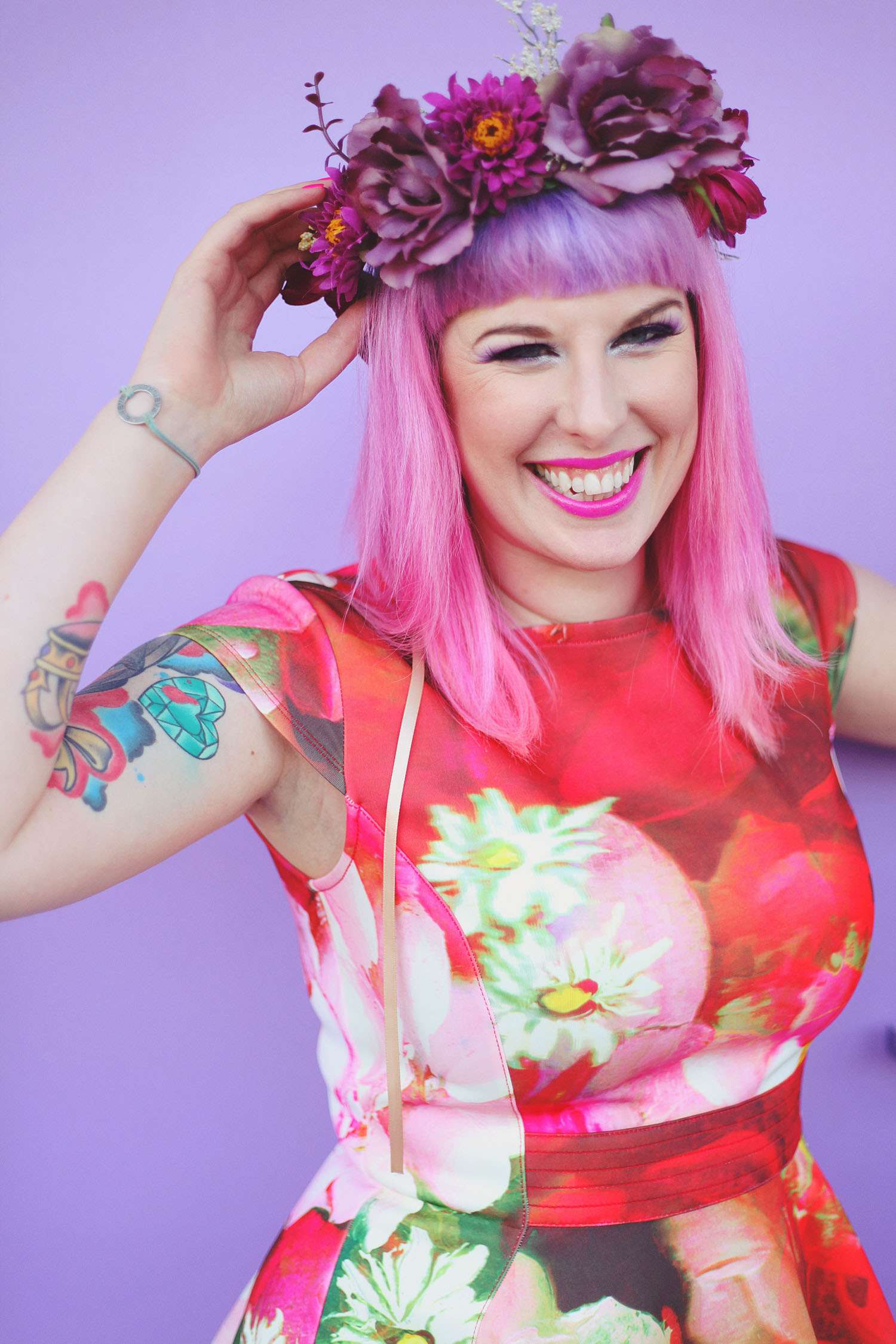 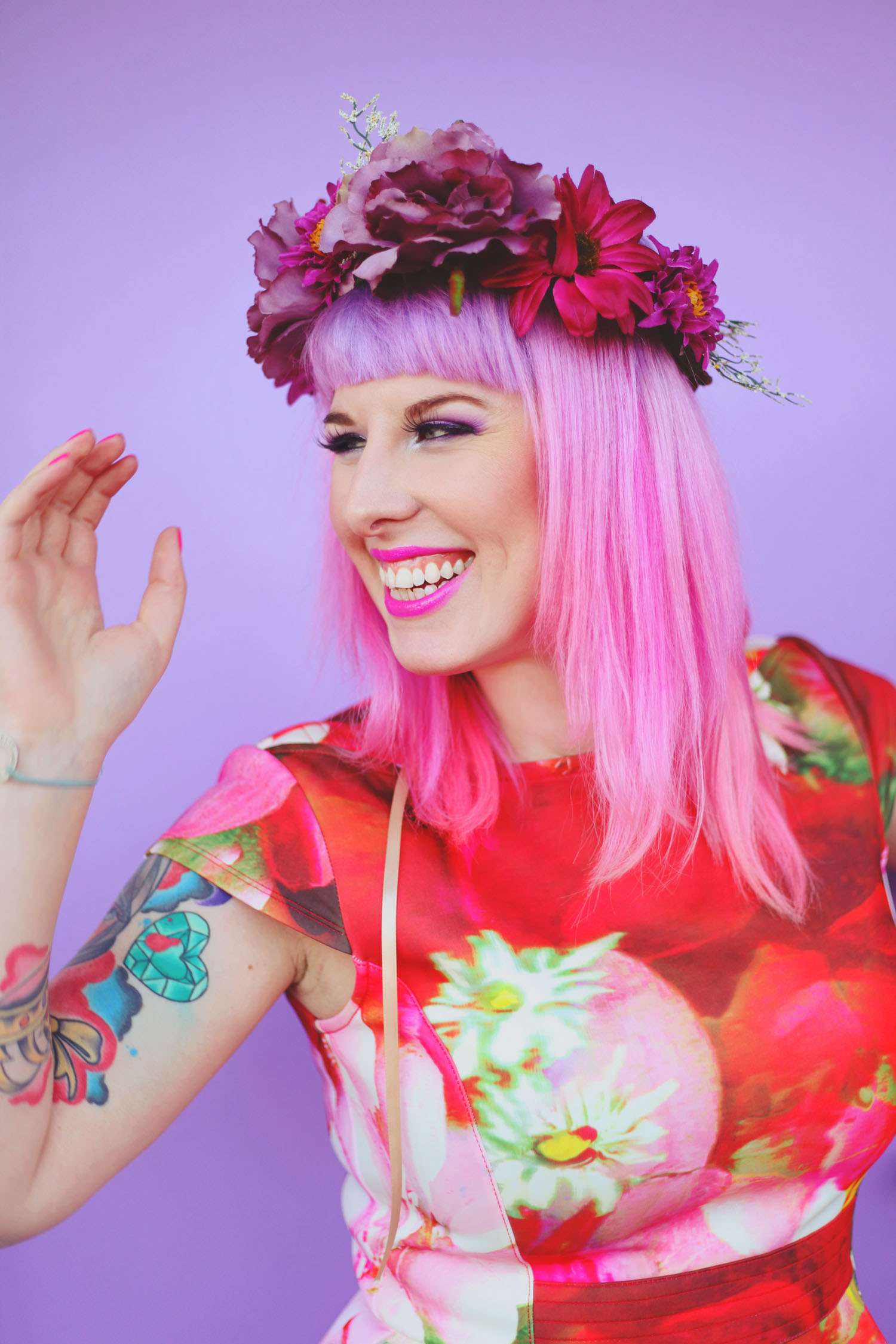 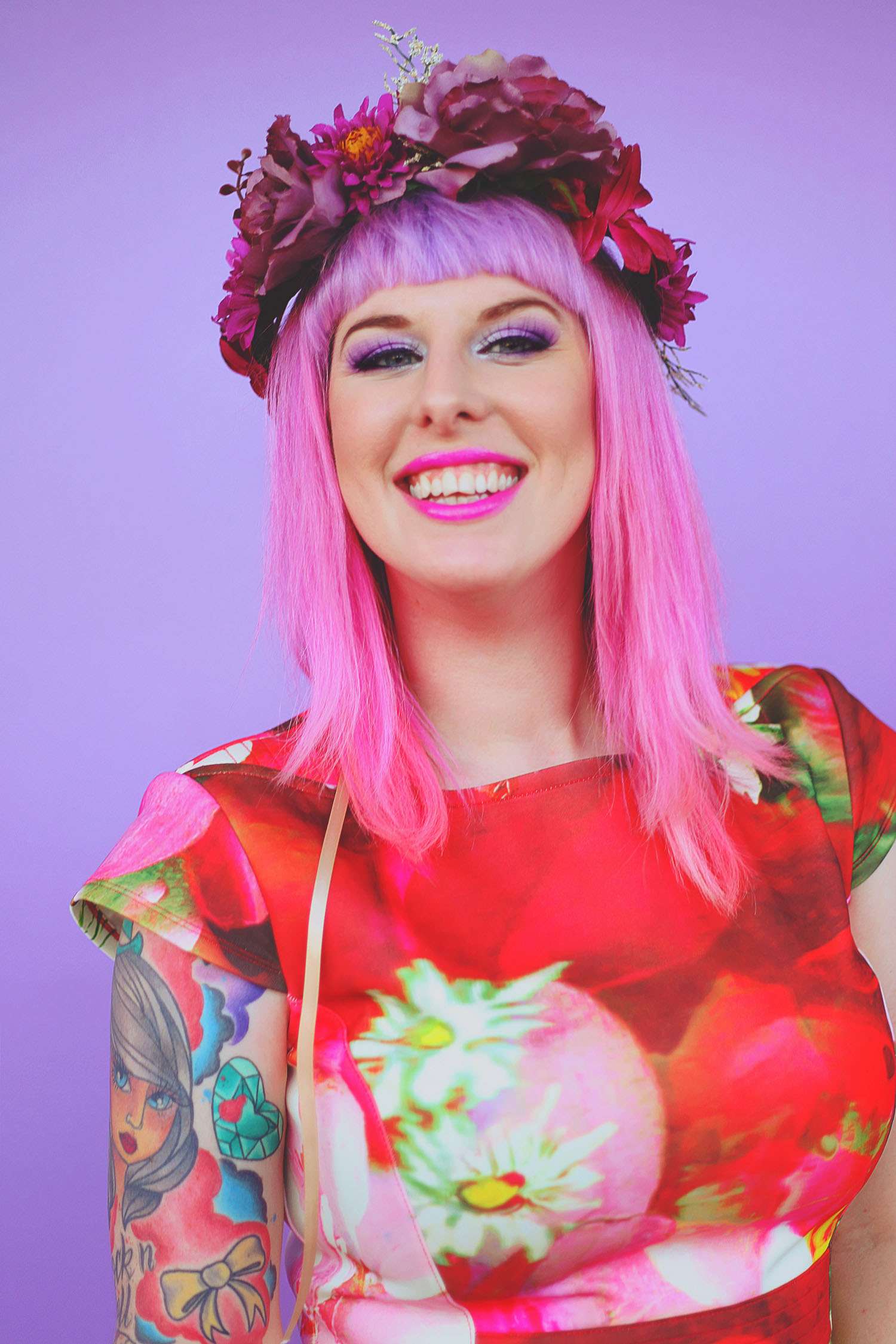 This dress is by Ted Baker by the way and my flower crown is Crown and Glory (who else?!)

When you book in you have the choice of a mountain or pool view room but you can actually see the pool from the majority of them. Each suite also has its own balcony (or outside seating area for those on the ground floor). 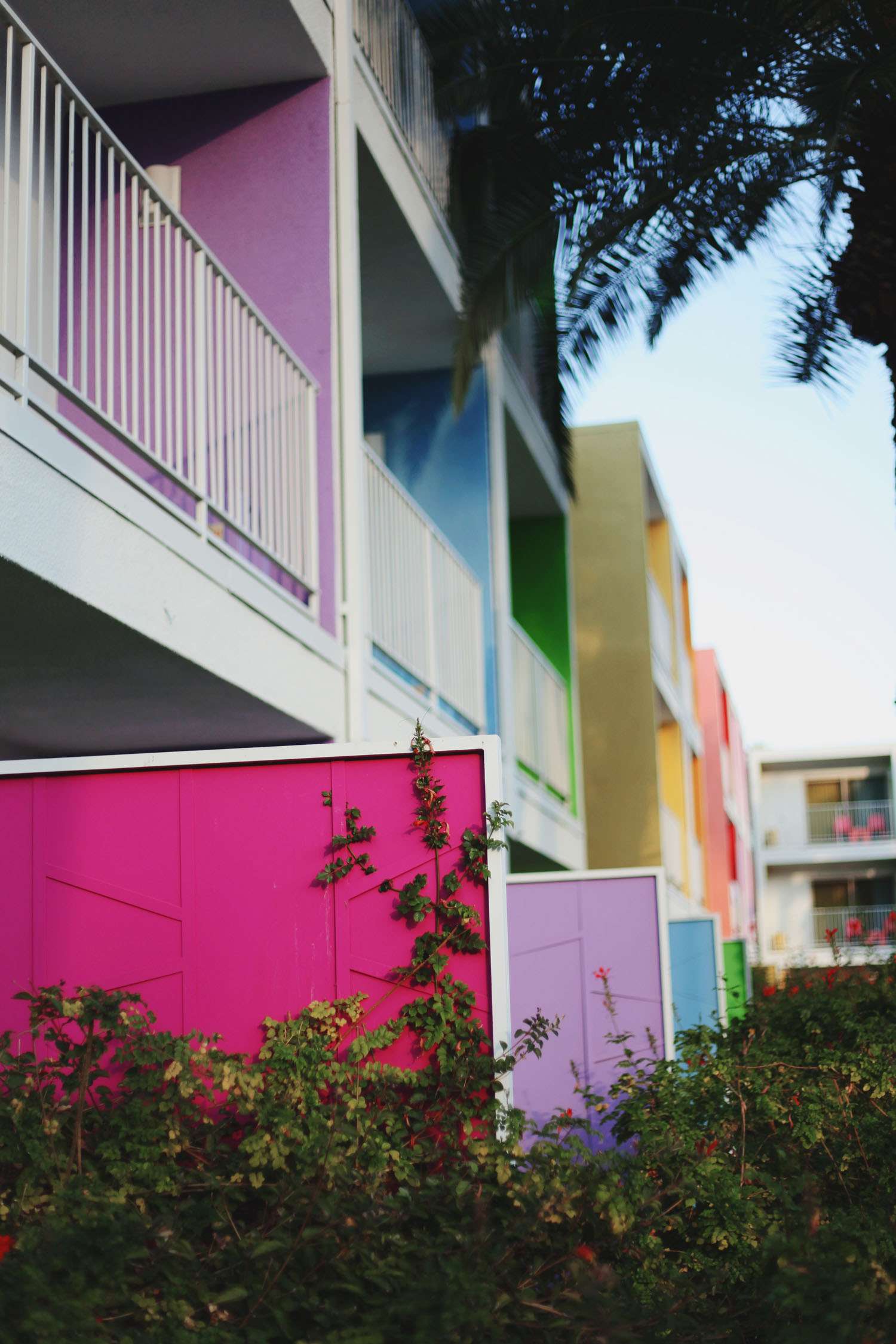 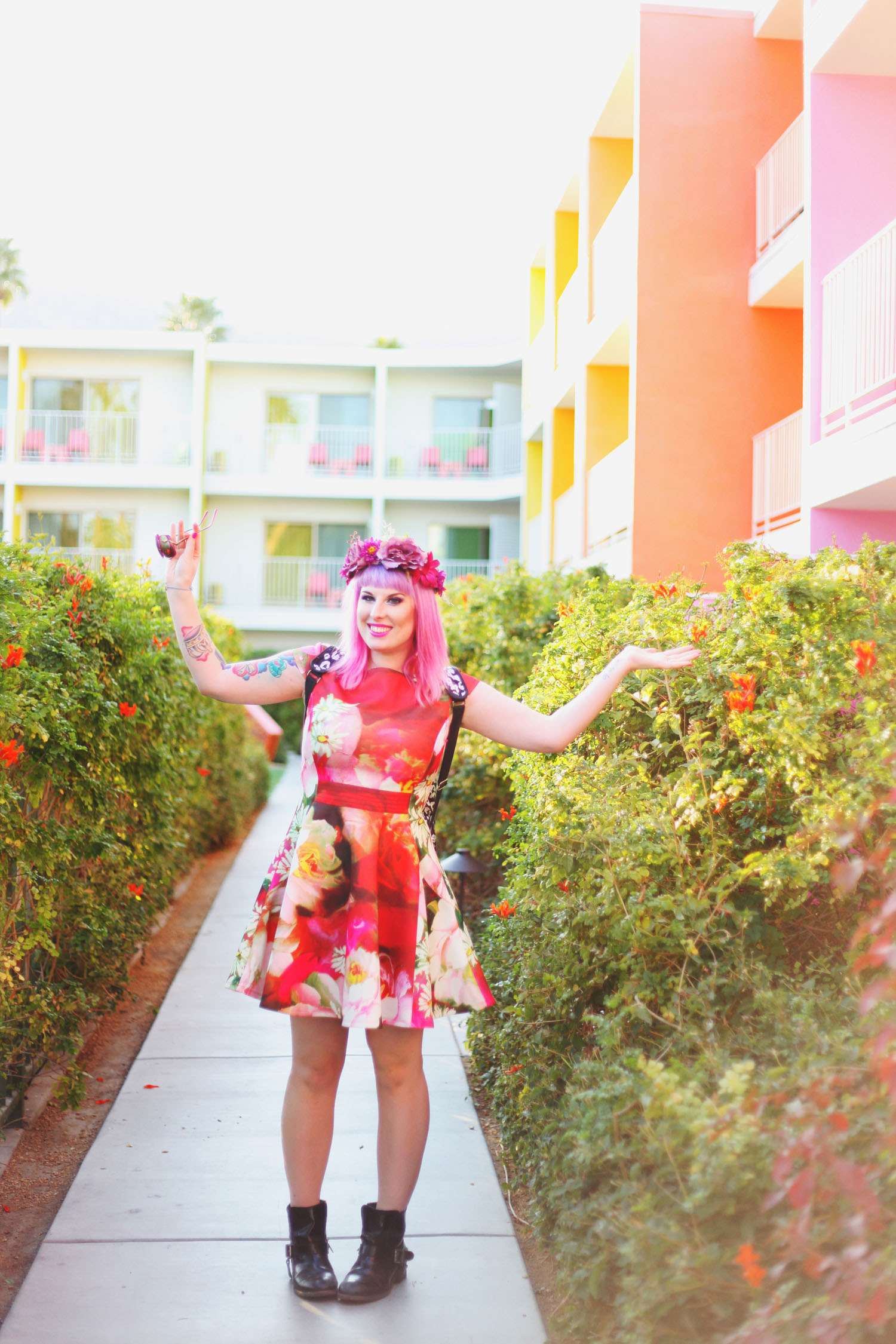 As we were there in the off-season there were hardly any other guests about, but in the busy summer months I can just imagine how electric the atmosphere must be. This place is made for pool parties and they actually host one every single Saturday! 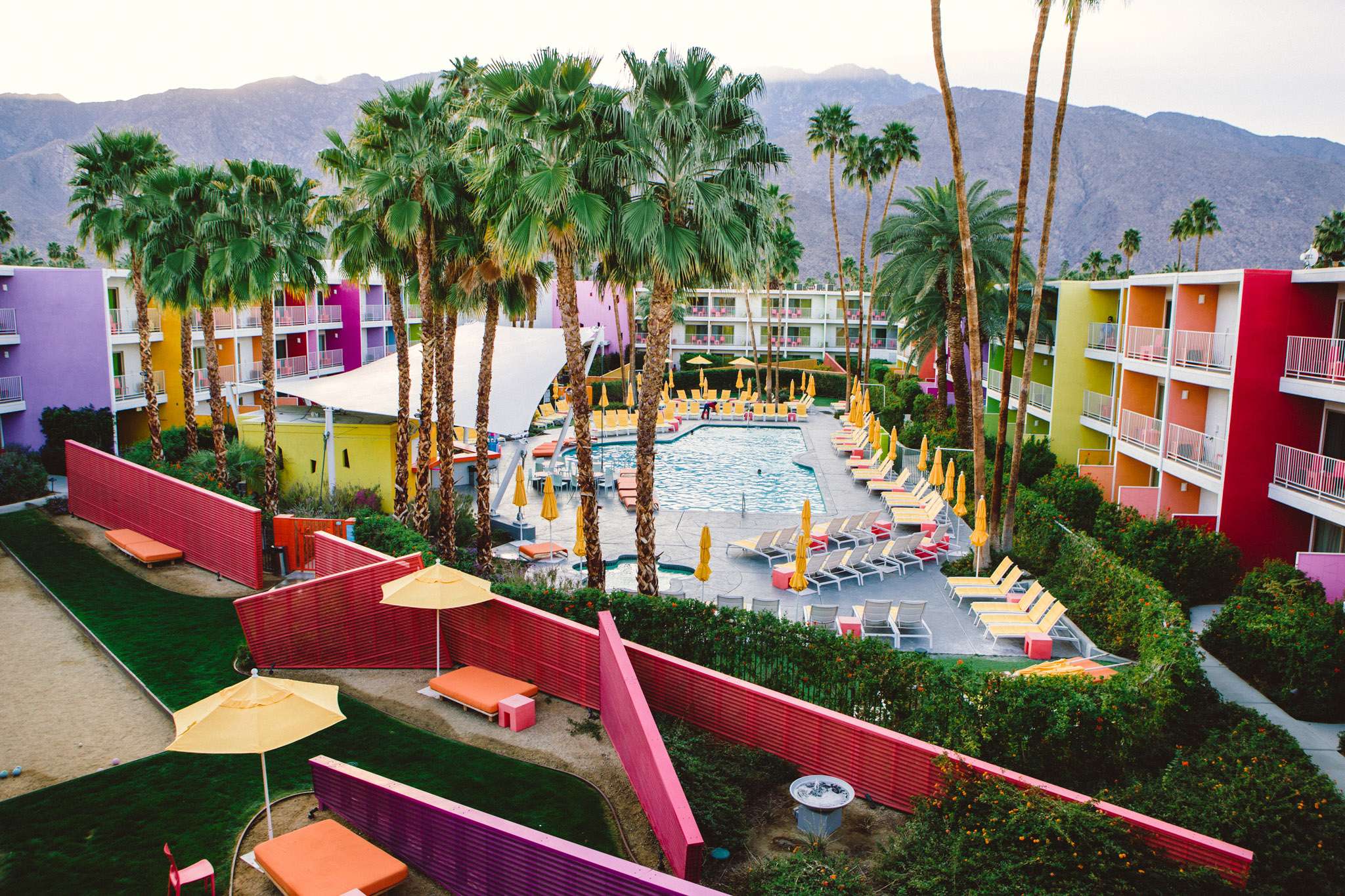 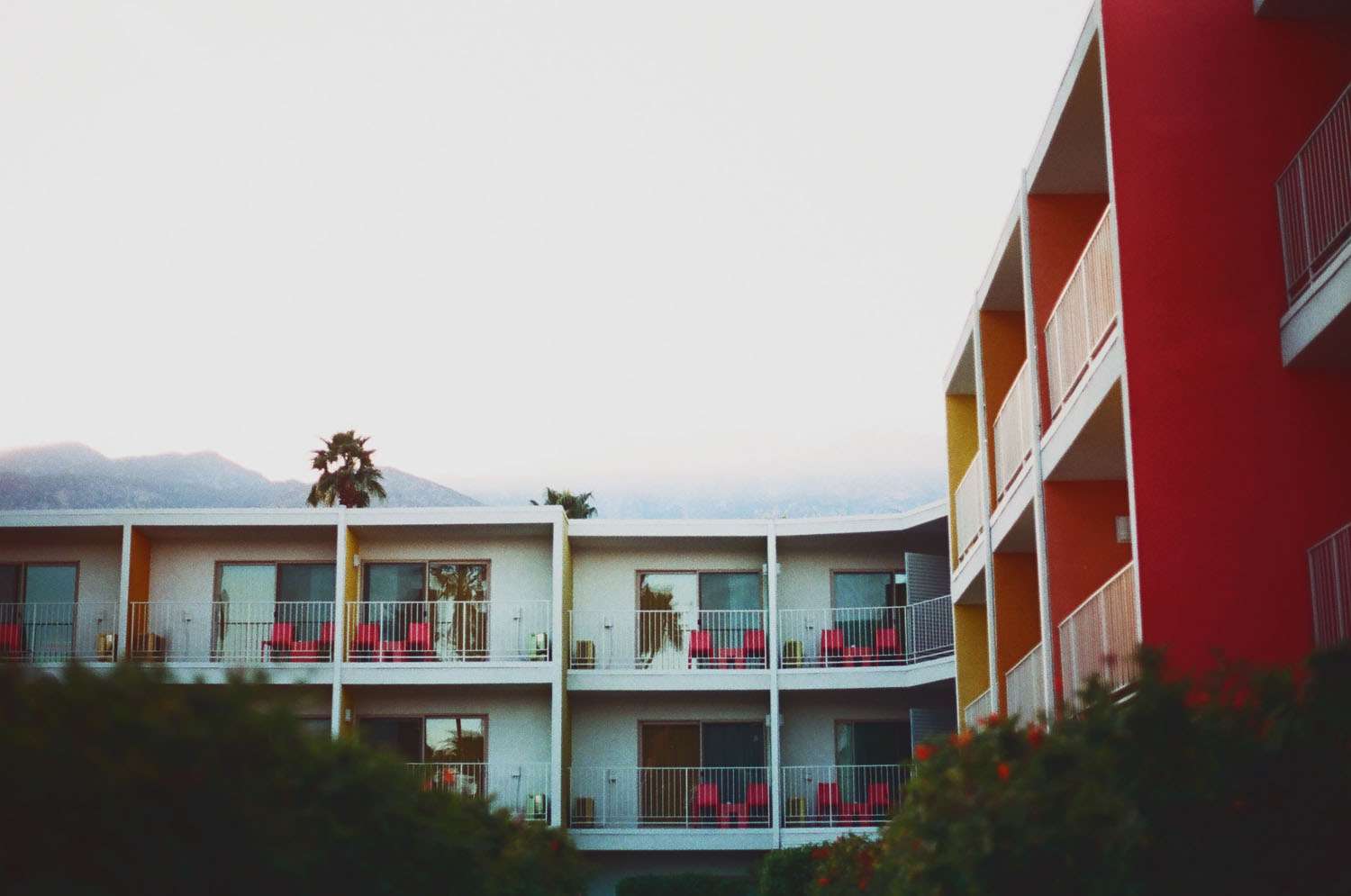 The hotel building isn’t new. It was actually originally a Holiday Inn but there are no visible hints of this previous incarnation. After a multimillion-dollar overhaul in 2012, the hotel has been utterly transformed. 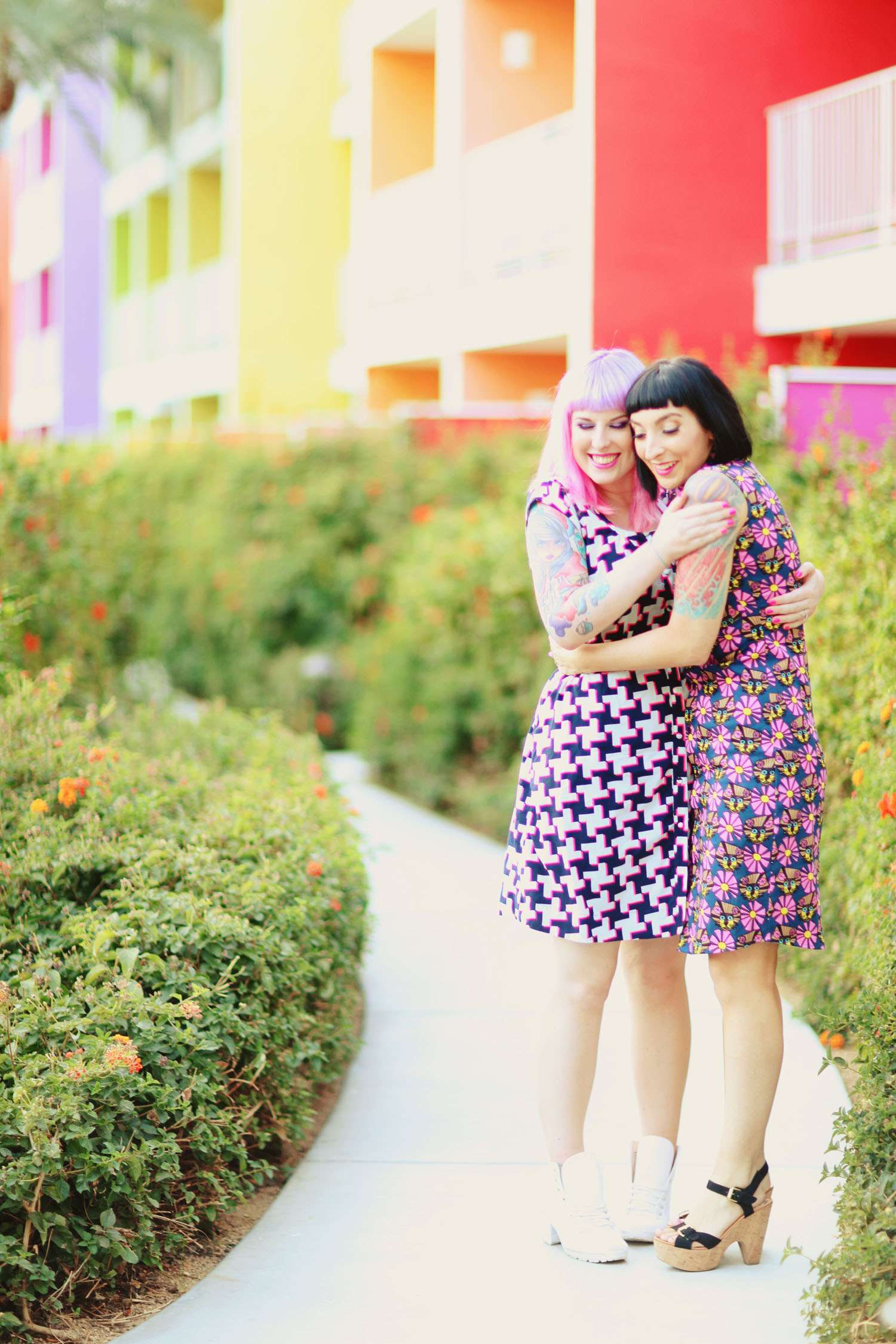 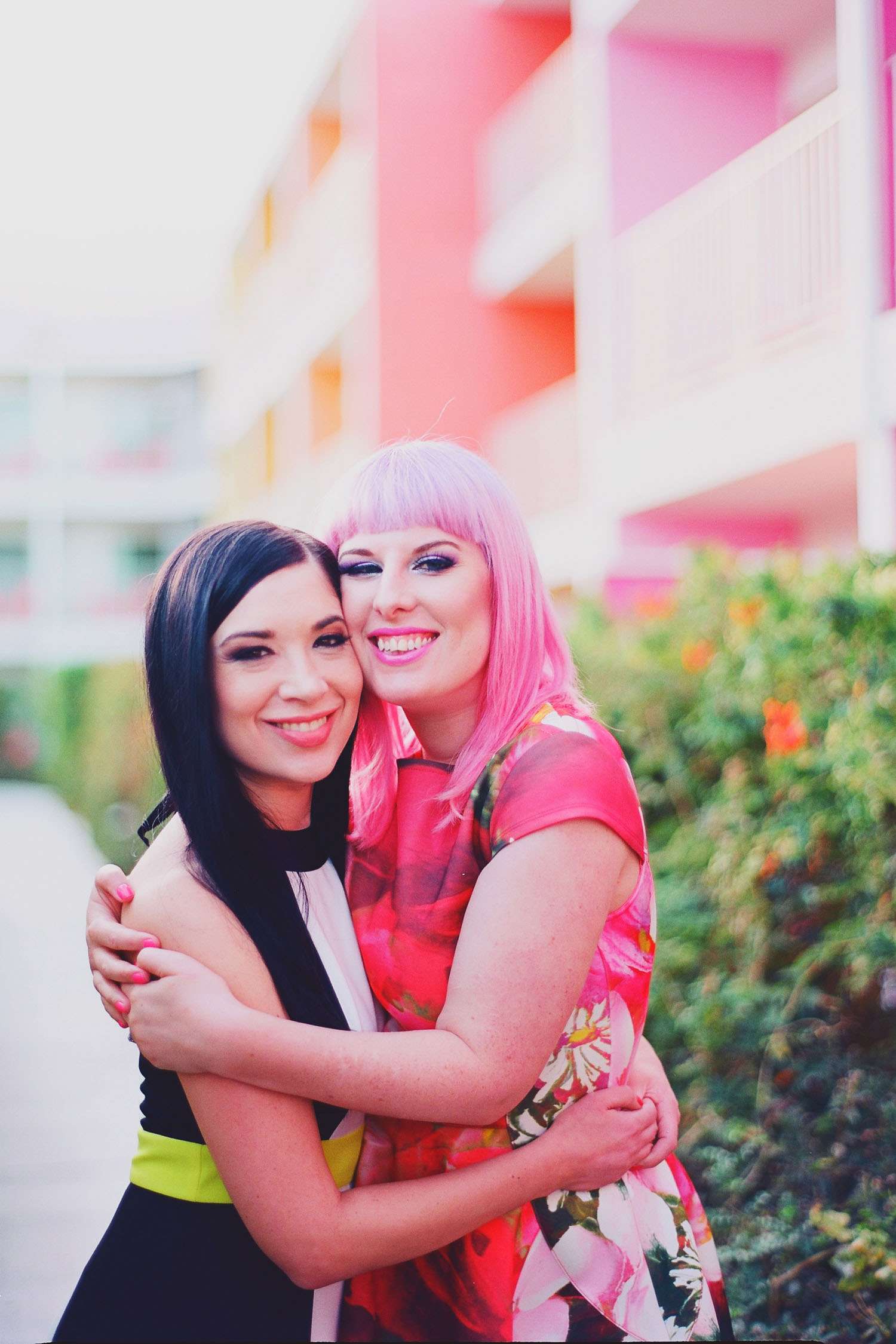 The rooms are pretty basic but they’re a good size (three in a bed? No problem!) and have everything you could possibly need. There are 245 rooms to choose from and each comes in one of 14 amazing colour combinations! Allie and Christina were in a pink and purple room and our friend Richard, who also stayed here, was in a bright orange one! 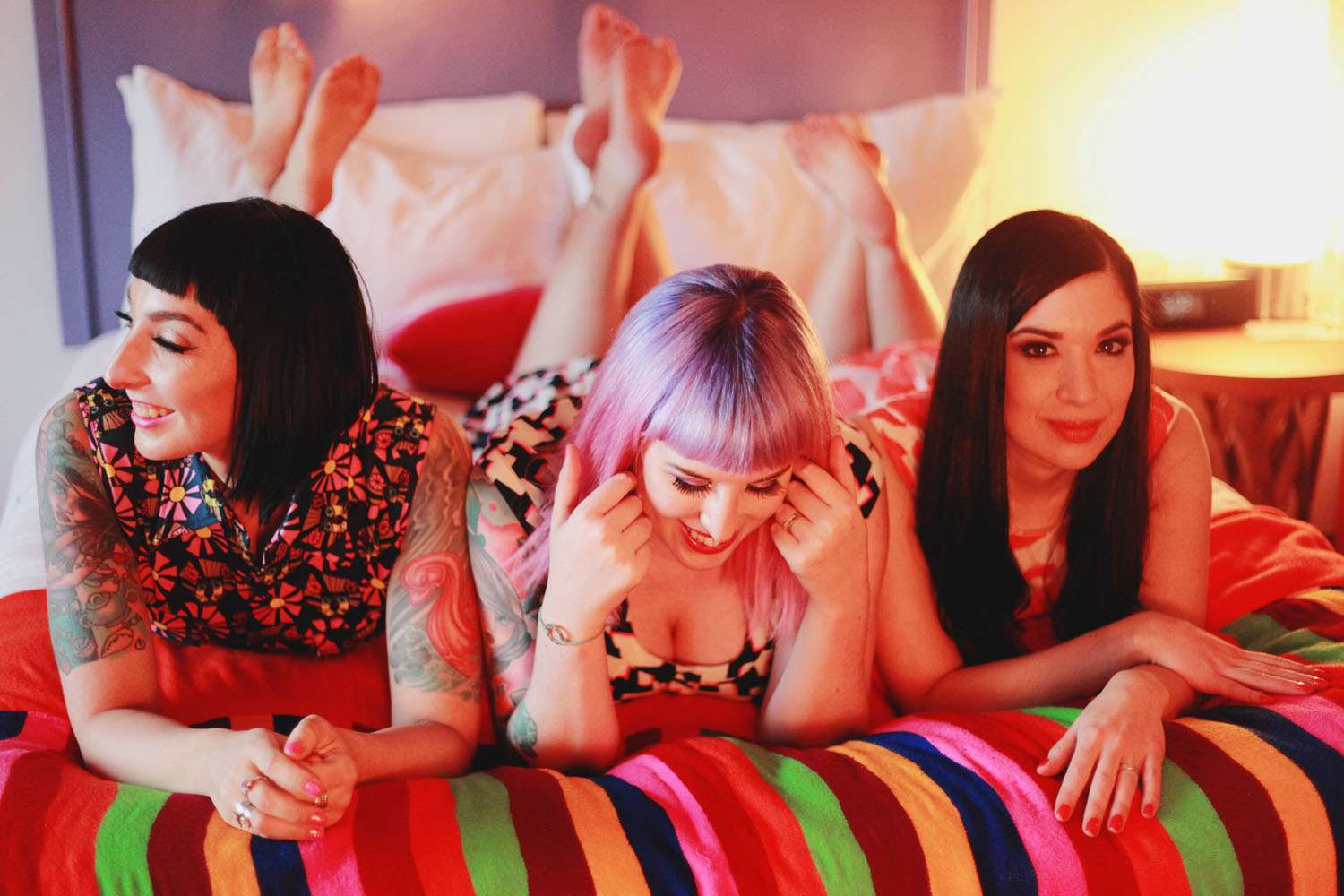 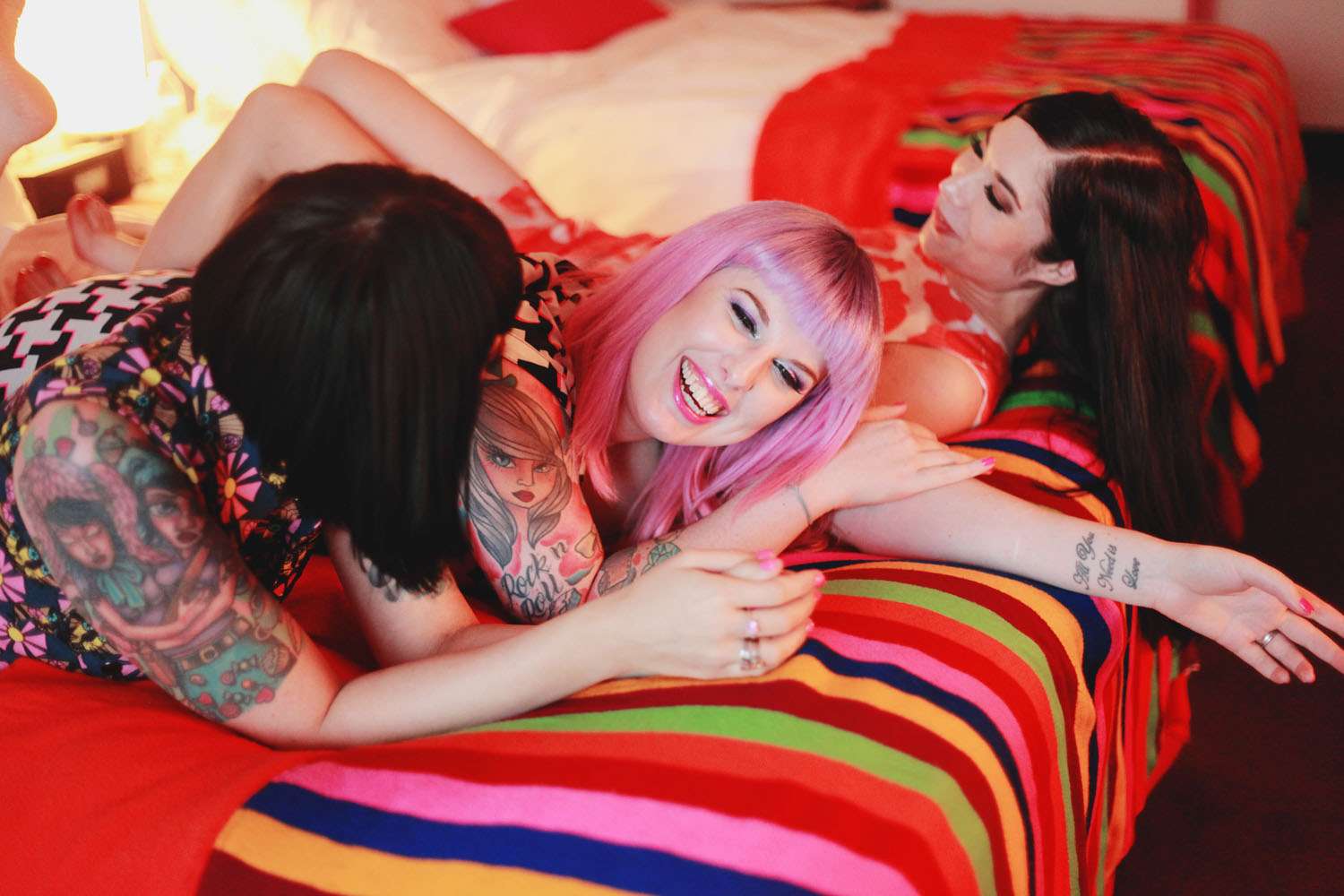 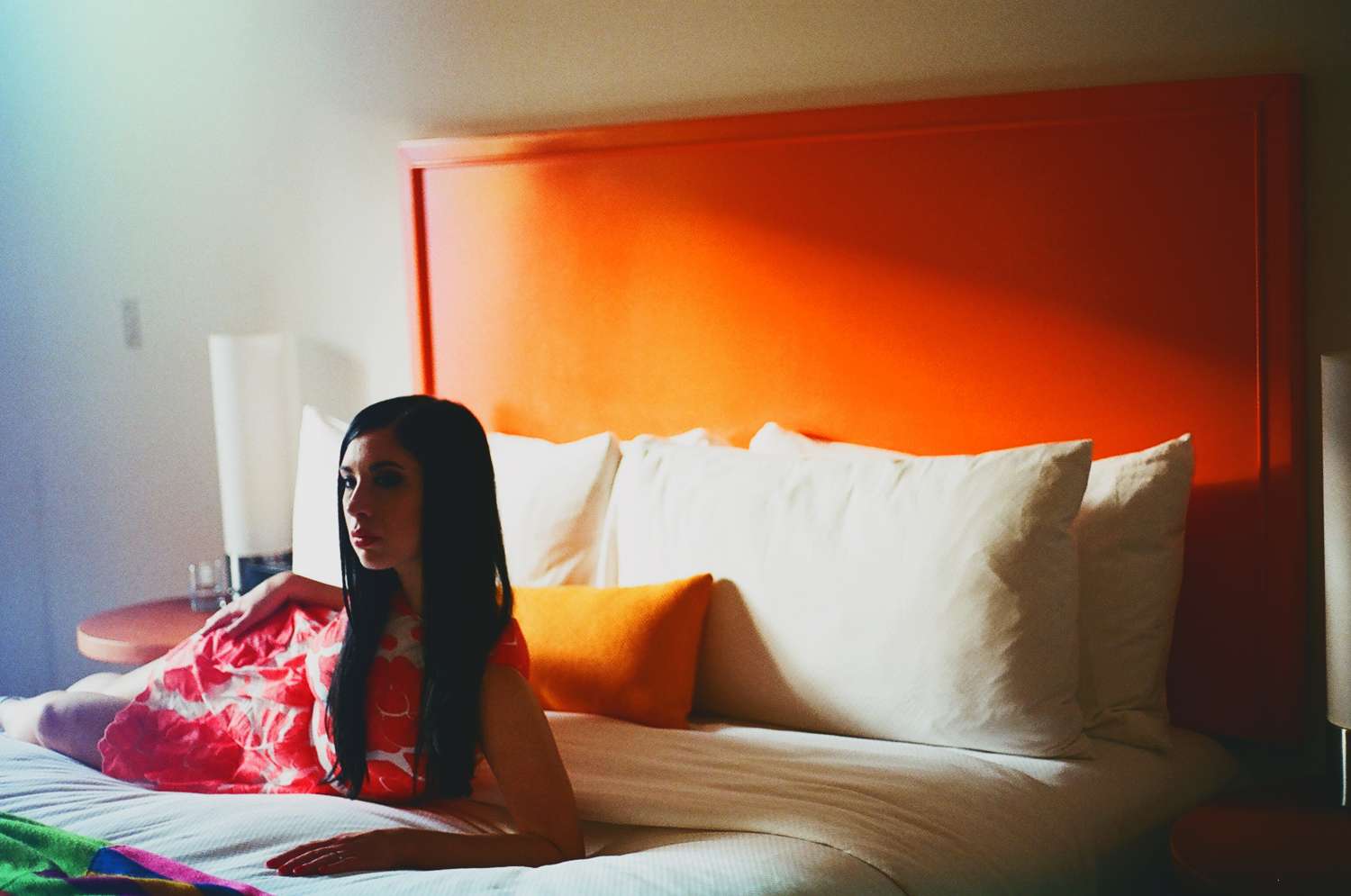 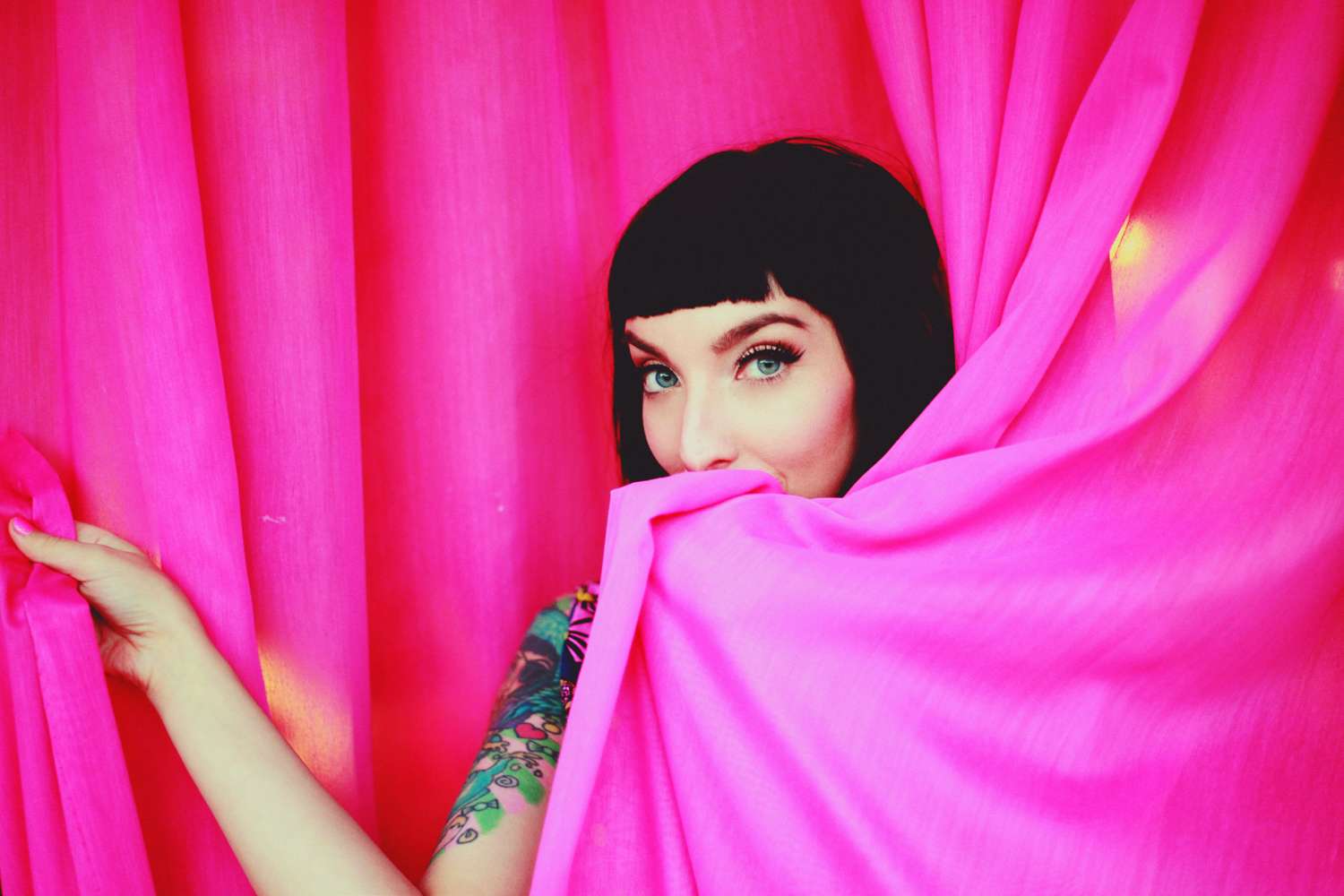 We ate lunch at the hotel bar which served Mexican food. As I’m sure you all know, California does damn good tacos and these were some of the best I’ve ever had. The margaritas were also a very welcome afternoon indulgence! 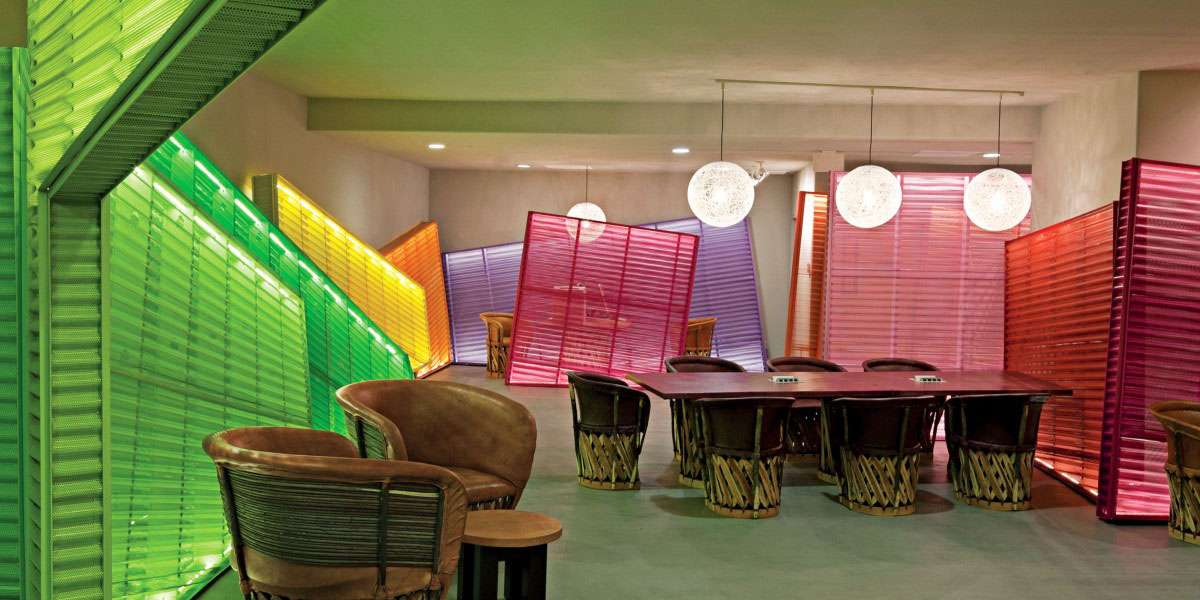 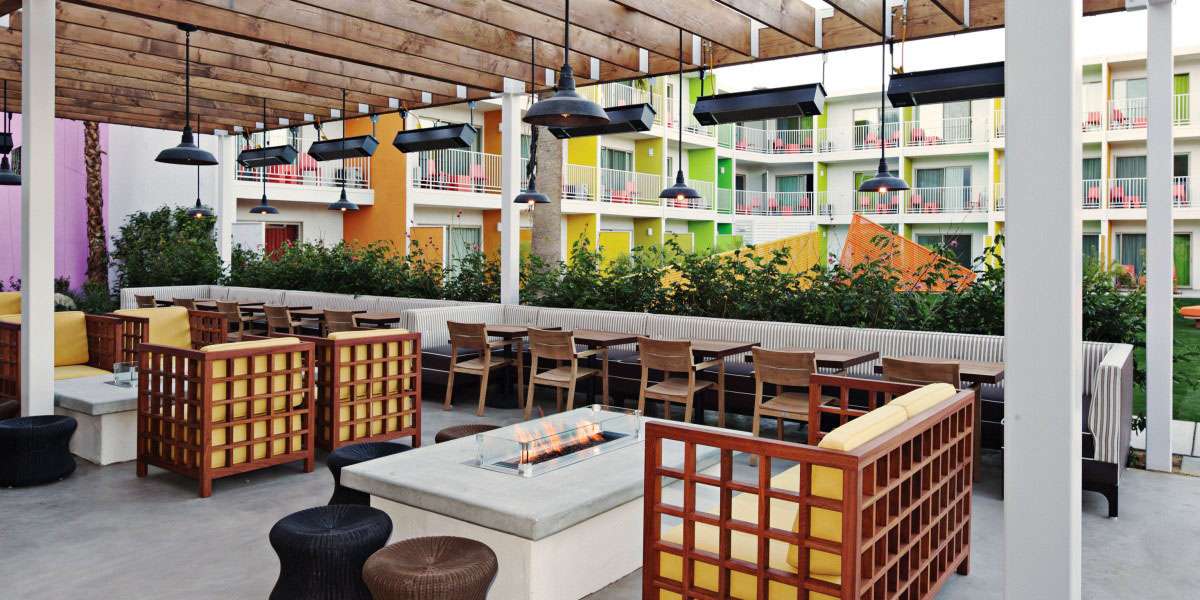 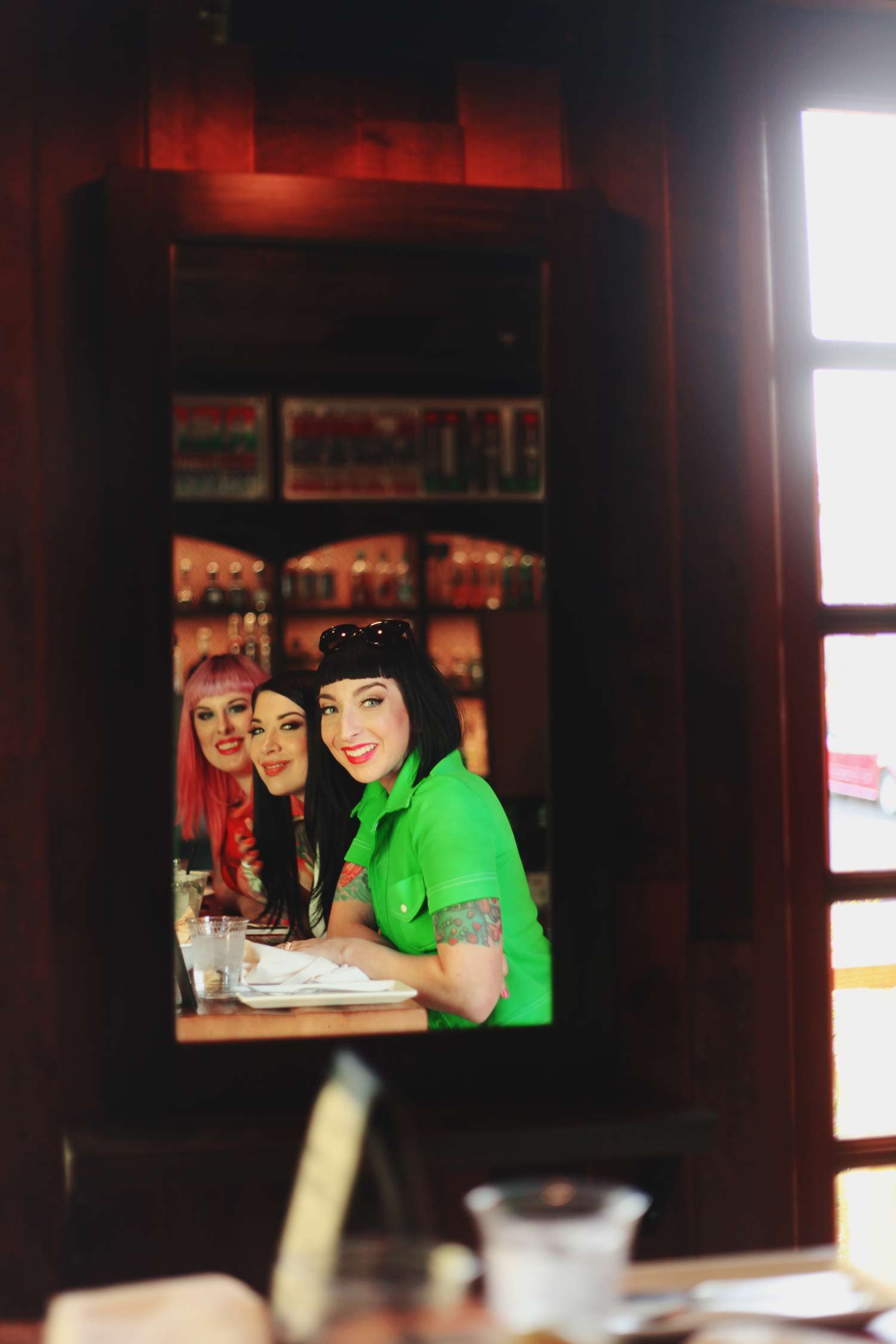 The best part about this amazing mecca has got to be the price. I was shocked when I discovered that their rates started at just $180 a night (dependant on the time of year). I mean, where else could a so called ‘budget’ hotel be so glorious?! 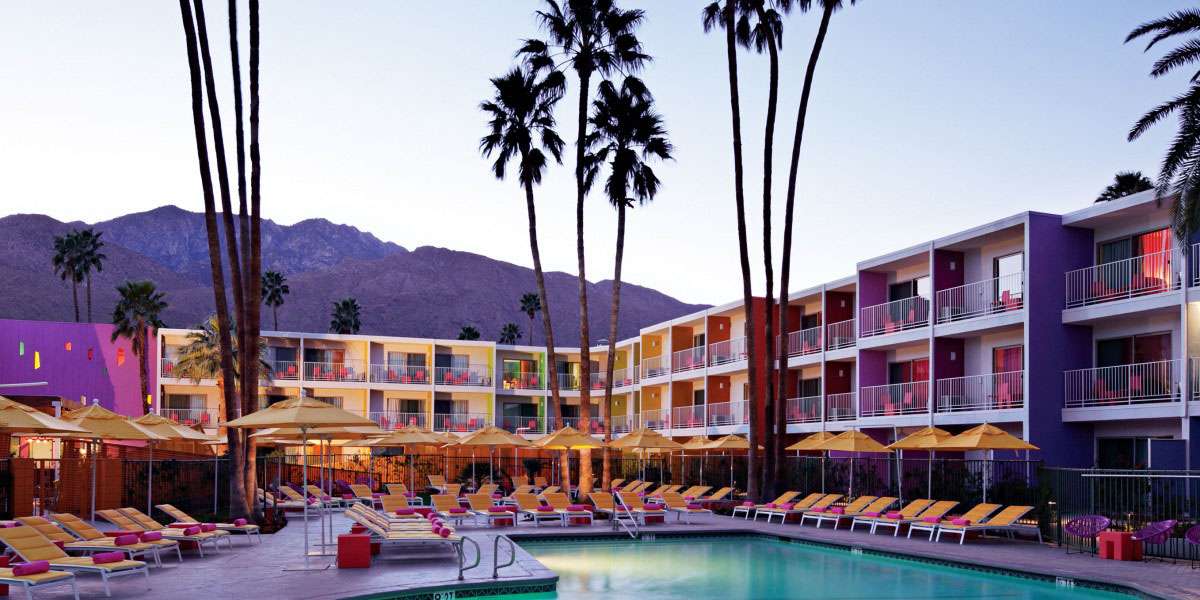 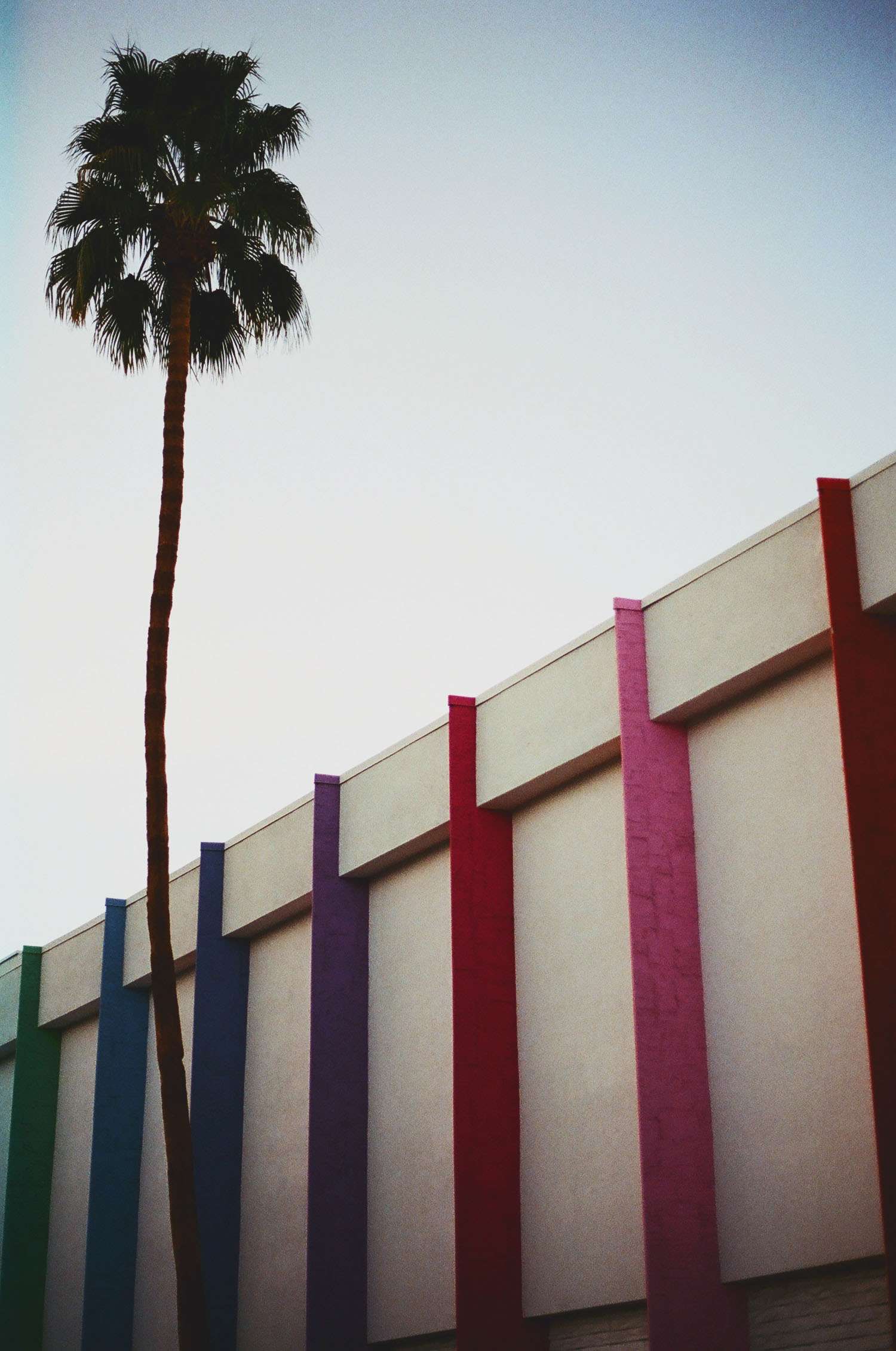 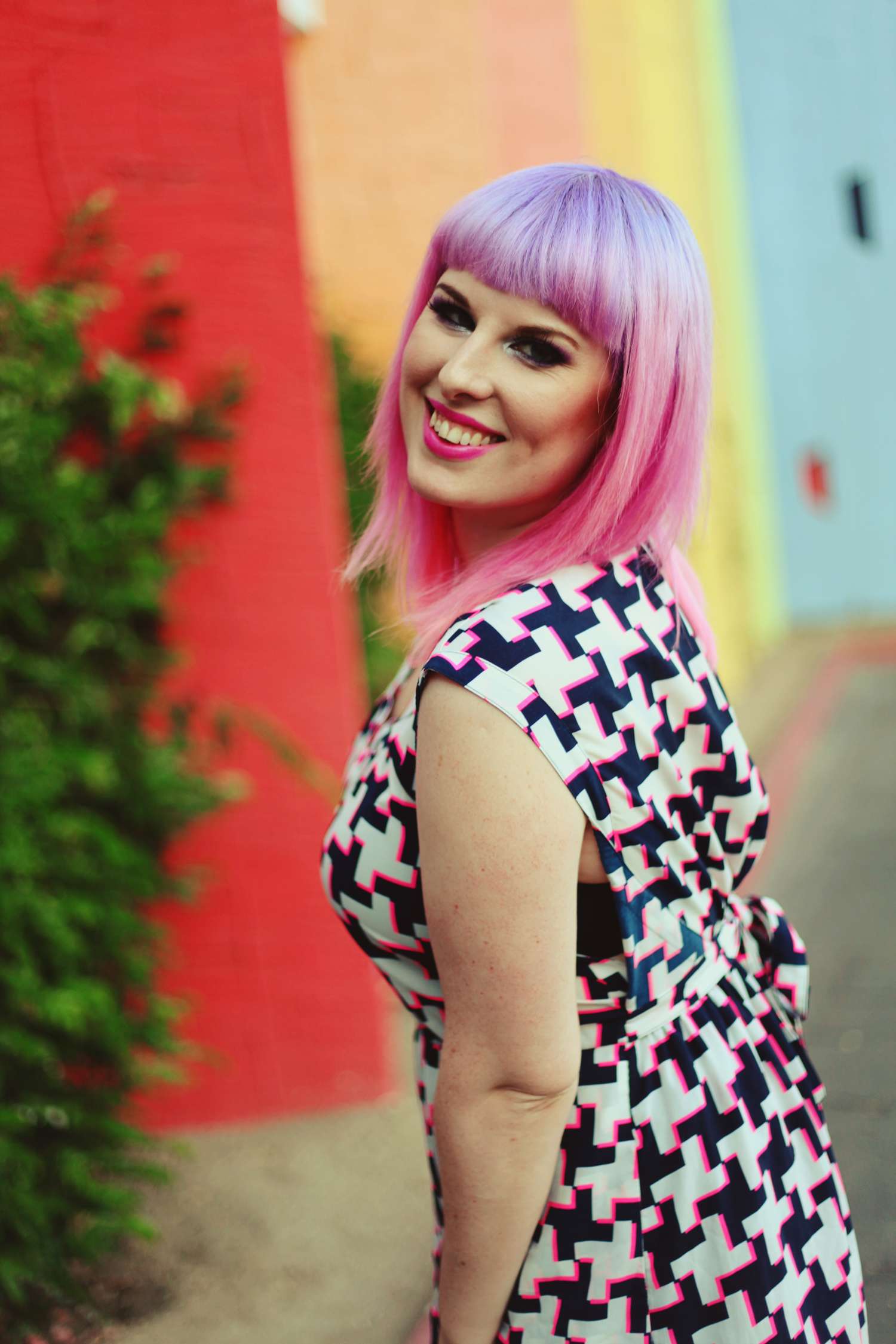 This dress is by Leonard St. I bought it in a little boutique in Melbourne.

The Saguaro was everything I hoped it would be, and so much more. We were so sad to have to say goodbye.

Are you planning your honeymoon or wedding in Palm Springs? Even if you don’t stay here be sure to pop in for a visit. I promise you won’t regret it! 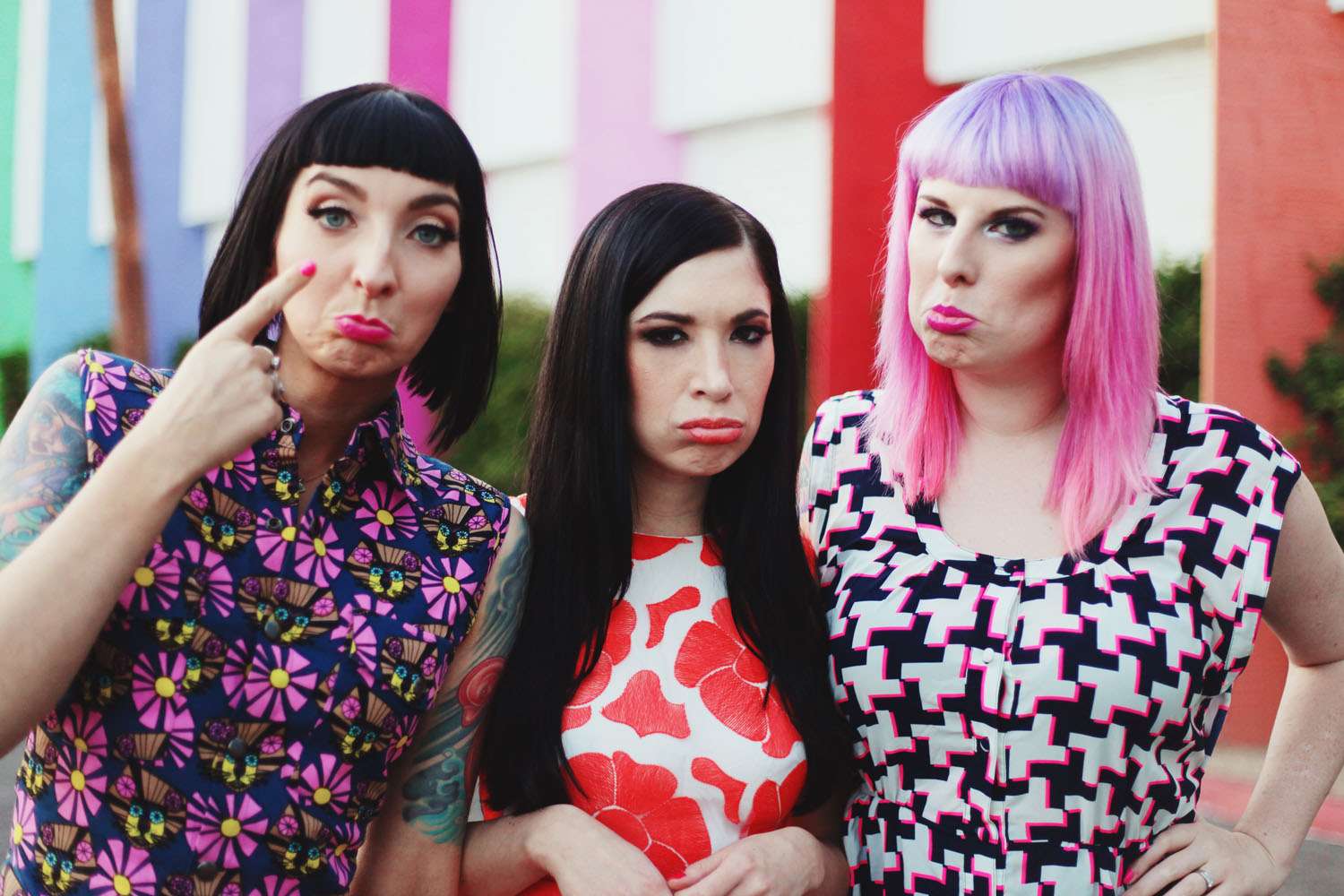 If there's one thing I've learnt from doing so much travel, its that packing the right things can make or break the flight. Even the longest journey in cramped economy can be much more bearable if you go into it prepared. I wouldn't dream of hopping onto a plane without any of these things now!

I've travelled to many a-far flung place over the past few years but I was really looking forward to last weekend's trip down to Camber Sands. The reason being that I was going there with these beautiful creatures, and we hadn't seen each other in FOREVER. It's the things closest to home that are often the most special don't you think?

I wouldn't say Gareth and I were particularly impulsive. My diary is usually pretty booked solid these days, and in the rare times when it's not I spend most of my time glued to my computer screen, trying my hardest to power through my ever expanding 'to do' list. Gareth has also never, ever surprised me with a holiday before so its not something I'd ever expect him to do.

Marrakech: The Good, the Bad and the Very, Very Ugly

Ahh Marrakech. When I left in June, after a whirlwind two days with Gala and Shauna, I knew that one day I’d be back. I just didn’t realise it would be QUITE so soon. But when my sister Rachel and I were discussing her wedding décor plans recently, a quick trip over to the rainbow lined streets of the former imperial city to buy things for the wedding seemed like a perfectly logical way to spend a long weekend.

Known for it's steep rolling hills, cable cars and as the home of the iconic Golden Gate Bridge, San Francisco is sure to be at the top of many of your honeymoon destination wish lists. Which is why, when I was there recently teaching a workshop, I took copious notes on all the awesome things we did and saw for this blog post!