It’s no big secret that I’m obsessed with pink hair (duh!) but it’s unusual that the object of my affection is the groom and not the bride. It goes without saying that this bride looks incredible, but God damn, her groom looks awesome too! Cyn and Stan were married in Los Angeles. Their ceremony was at Club Nokia, on the stage (the first ever wedding there) and the reception was held at the incredible Sunset Marquis hotel. 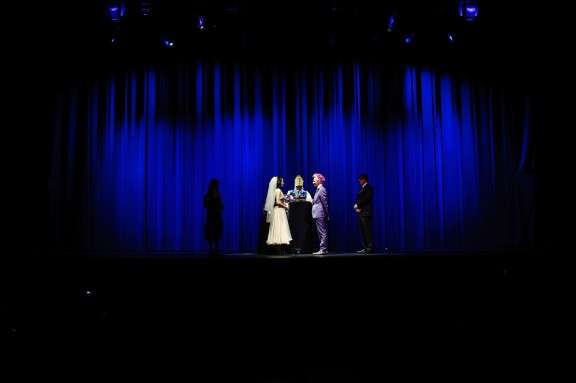 “Our wedding was inspired by Hedwig and the Angry Inch by way of the Princess Bride!” explained Cyn. “We were the first couple ever to get married on the stage of Club Nokia. We kept looking at various wedding venues and nothing clicked or felt like ‘us’. We are both very much into music and then Stan got this crazy idea about getting married on the stage of a cool music venue. Throughout our life together we’ve enjoyed many Rock n Roll shows around the world so it seemed fitting that our wedding should be a  Rock n Roll themed wedding. It sounded interesting but we didn’t know if it would be doable. Through Stan’s music connections we were able to make it happen.Things fell into place as one favor lead to another and Club Nokia consented to letting us get married on their stage. We had to plan the wedding quickly to fit into their schedule so we ended up organising everything in less than 2 months!” 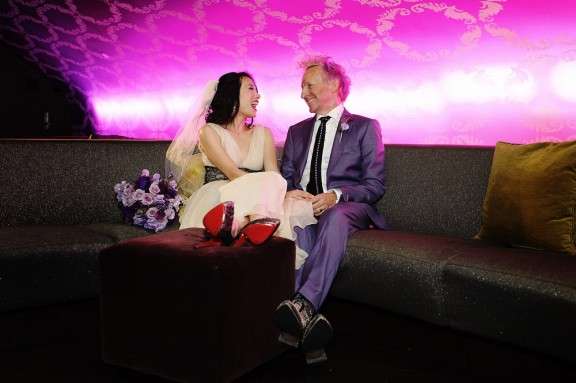 “We wanted the Princess Bride ceremony”, she continued. “A friend who is an actor and also an ordained minister performed our ceremony wearing a bishop’s costume while also reciting words with the Peter Cook accent ‘Mahwwage’. Since it was absolutely a non-traditional wedding we also selected our favorite meaningful songs for the ceremony. Stan made his back stage entrance bouncing and dancing all over the stage to ‘Shooting my mouth off’ by James, and I walked around the seating area and down the aisle up to the stage to ‘She’s a Star’, also by by James. We popped open a bottle of Veuve Cliquot on the stage, enjoyed a celebratory first swig from the bottle and had our first dance to ‘Absolute Beginners’ by David Bowie and exited to ‘Safe and Sound’ by Capital Cities to enjoy more drinks in the cooly lit Club Nokia VIP area.” 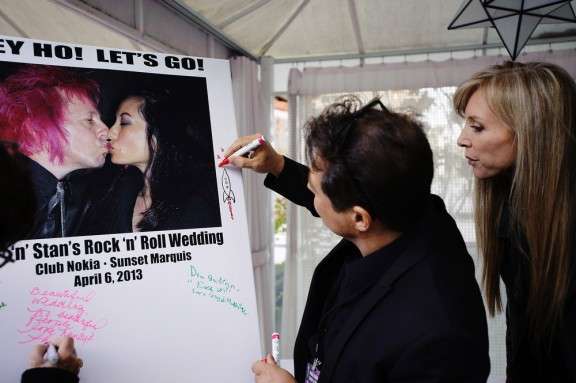 “Because we were getting married at Club Nokia and the reception was at the Sunset Marquis across town we made arrangements for guests to arrive at the hotel with a tour bus waiting to take them to the ceremony (we successfully kept the ceremony venue a secret from our guests). As a souvenir, and to set the Rock n Roll mood, all the guests were given rock star VIP all access tour laminates that we’d designed. The party bus was a raucous success, becoming one huge rolling champagne toast as we went from one photo location to another and finally to the Sunset Marquis for the reception dinner.” 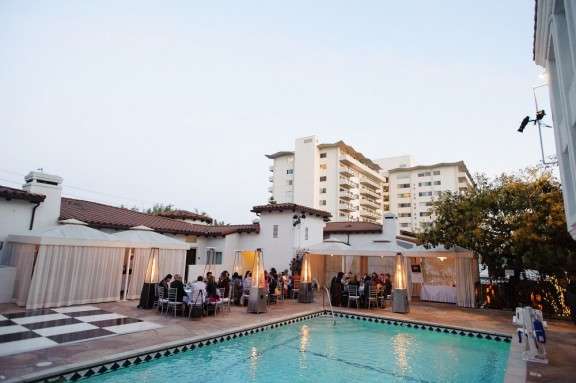 “We did splash the cash on the reception venue but it was perfect for us because it is so full of Rock n Roll history. It defines the Rock n Roll lifestyle in LA and is a home away from home for rock stars new and old. What could be a better place to have a reception where the legends have lounged and lived and loved? It’s also a hidden oasis among the bustle of Sunset filled with amazing Rock n Roll photography.” 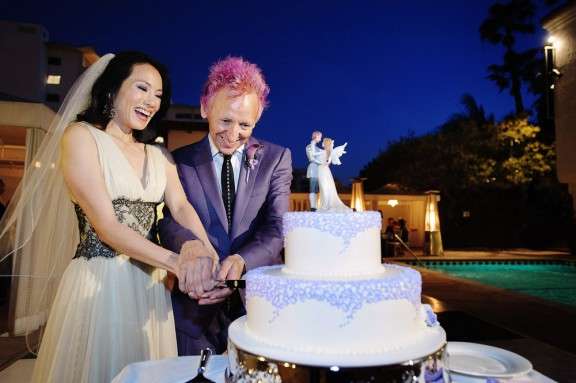 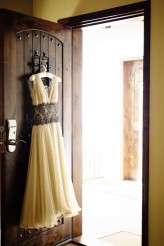 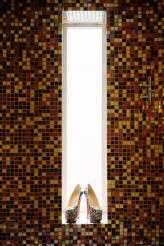 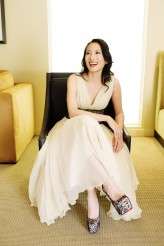 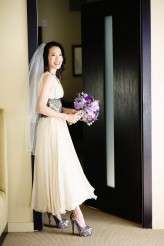 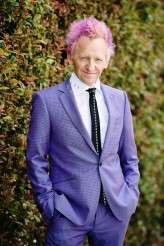 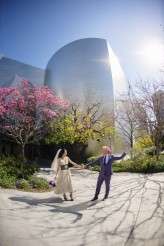 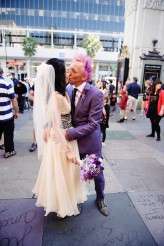 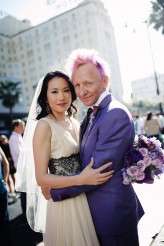 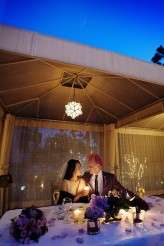 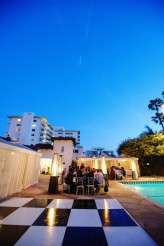 On 26th May this year Kira & John were married in Berkeley, California. The Lawrence Hall of Science at The University of California seemed to be the perfect space to host their reception as the bride had attended school there. It was a unique space and has plenty of things for people to look at and play with throughout the party! "Our wedding was held at the Lawrence Hall of Science in Berkeley", wrote the bride. "The ceremony was held in a large courtyard called Science Park over a fountain (and exhibit), and the reception was held inside the museum, where all of the hands-on exhibits were open to guests. All of our portraits were taken in the nearby Botanical Gardens. Our officiant was John's law professor. We included a final blessing repeated by all of our guests... 'Live long, and prosper!'"

Victoria and Matthew both work in the music industry (the groom is in the band Madina Lake) which is how they first met. Despite living on opposite sides of the world, the bride in the UK and the groom in America, that didn't stop them dating!

In doing their initial research, Sarah and Brian quickly started to realise that for the price of a traditional package wedding at a hotel or resort, they could instead piece it together using the people, places and things they already loved. “Using our everyday favourite things as inspiration for our day made decisions easier and the wedding itself feel authentic and real.” said Sarah.

Heather and Bill's New Jersey wedding could not have been a more perfect example of a Rock n Roll wedding if it tried! The blue haired bride and her punk rocker groom's big day was inspired by their love of music.

The couple met in college but fell in love by going to concerts and enjoying live music together. They really wanted their wedding décor to emulate their relationship and journey together so they tables were all named after venues they had seen shows at and their guestbook was made of of vinyl.