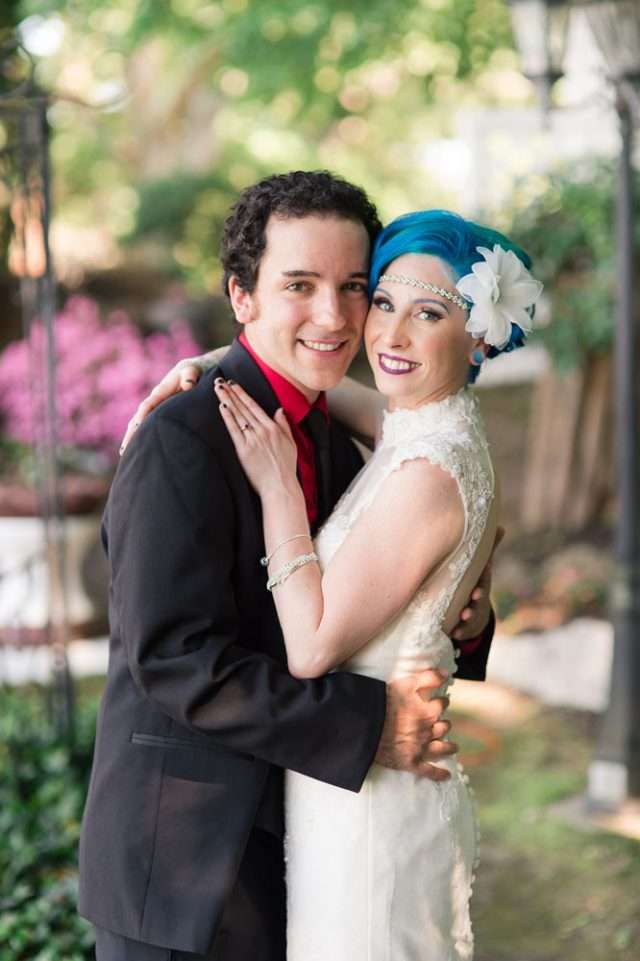 Heather and Bill’s New Jersey wedding could not have been a more perfect example of a Rock n Roll wedding if it tried! The blue haired bride and her punk rocker groom’s big day was inspired by their love of music. 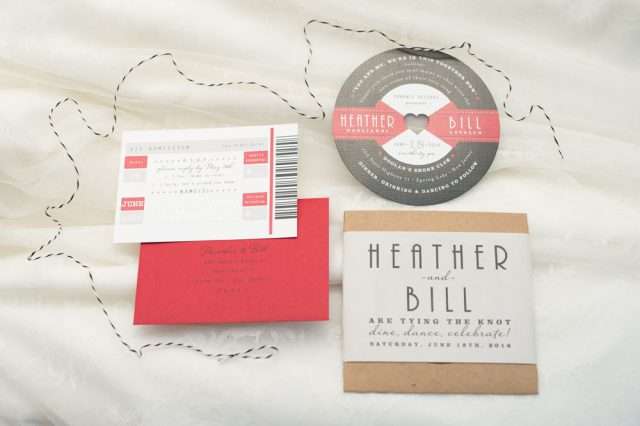 “Bill and I connected over our love of music”, said Heather. “When we first started talking, we used to swap CDs with each other. Right before we started dating, he bought me Nine Inch Nails tickets for my birthday (pretty much the moment he had my heart). We see a concert about once a month, our living room is decorated with band posters, I play guitar and ukulele, he plays guitar and keys, and it’s a constant debate over who has better music on their iPod (it’s me!) Since it’s such a major part of our lives, it made sense to make it our wedding theme.”

“We used all of our favourite music during the day, we didn’t care that it wasn’t typical ‘wedding music’. The bridal party walked into the Beetlejuice theme, I walked down the aisle to AFI, Bill and I made our ceremony entrance to NIN and our first dance was to Placebo. Our invitations were made to look like little records in sleeves and we quoted NIN & MCS on them.” 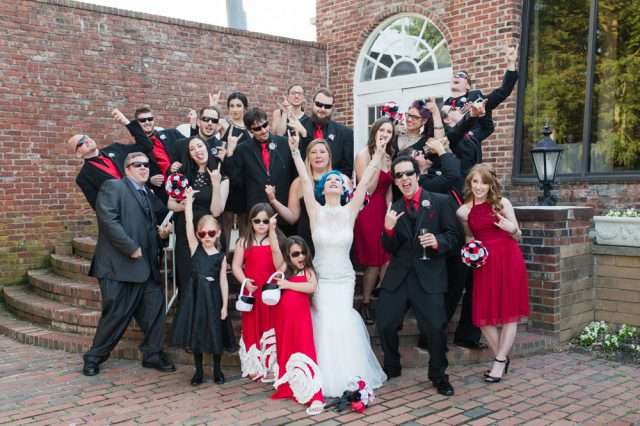 The bride made all the bouquets and flowers from sheet music. “I made them with help from the bridesmaids. They were made from card, sheet music, and song lyrics. Each bridesmaid had lyrics of one of their favourite songs in their bouquet. I also made the boutonnieres and corsages out of sheet music. We saved money by doing this. I think we spent less than $100 for 8 bouquets, 3 corsages and 13 boutonnieres. They did take a whole lot of time though!” 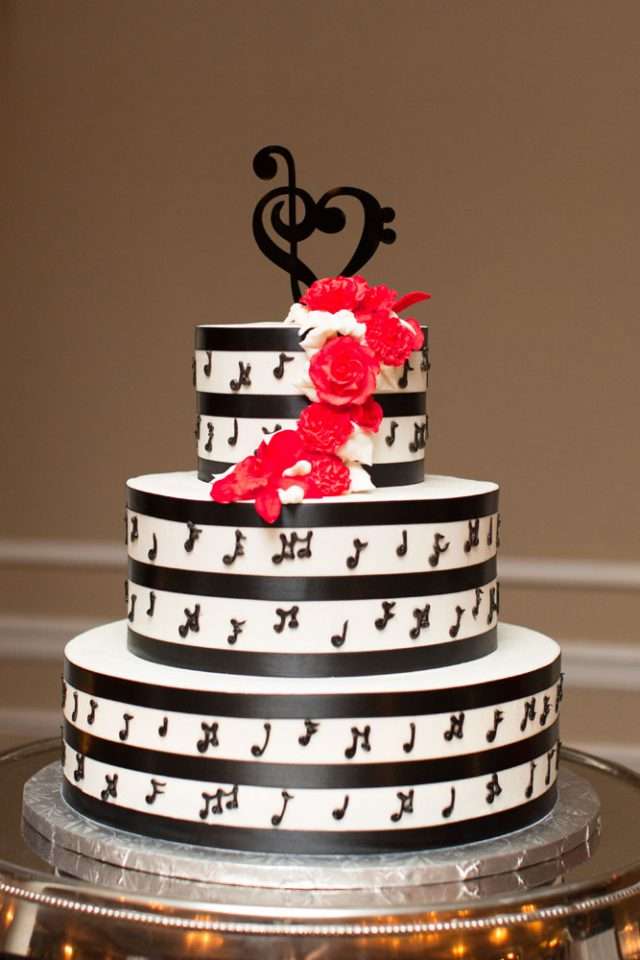 “The hardest part of wedding planning was listening to other people’s opinions and criticisms of our ideas,” she said. “Hearing thing like ‘Are you sure you want to have blue hair/ use so much rock music/ get him a baseball ring/ not get your nails done/ be so weird…?’ was hard at times. It was difficult not to take it to heart when you hear it over and over. I shouldn’t have doubted my own wedding decisions though because the whole day turned out awesome!” 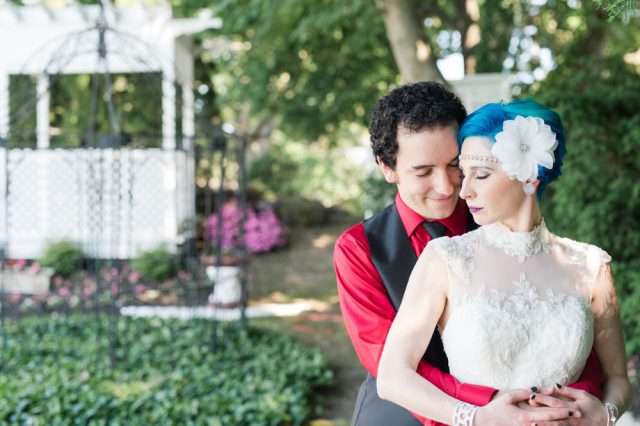 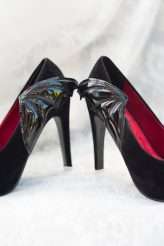 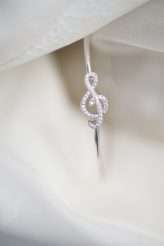 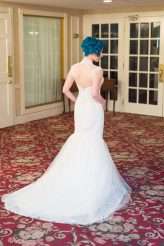 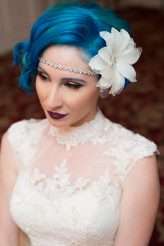 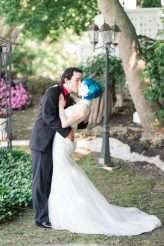 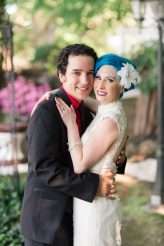 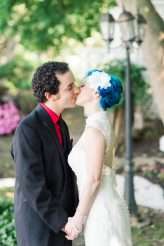 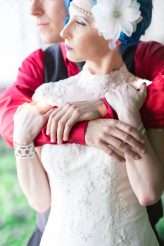 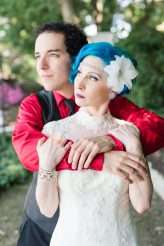 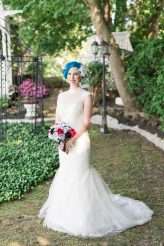 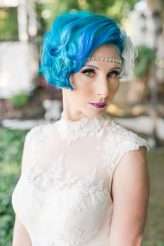 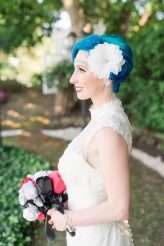 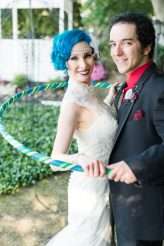 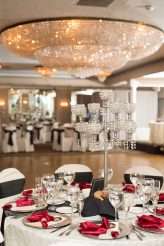 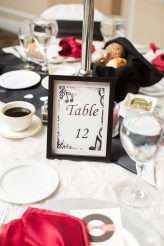 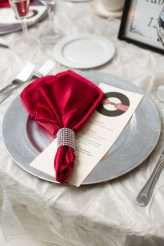 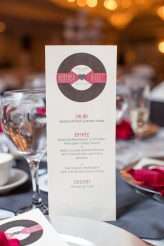 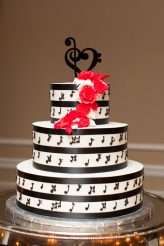 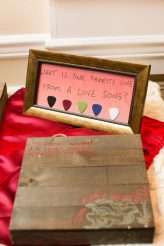 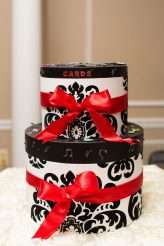 It's no big secret that I'm obsessed with pink hair (duh!) but it's unusual that the object of my affection is the groom and not the bride. It goes without saying that this bride looks incredible, but God damn, her groom looks awesome too! Cyn and Stan were married in Los Angeles. Their ceremony was at Club Nokia, on the stage (the first ever wedding there) and the reception was held at the incredible Sunset Marquis hotel.

Victoria and Matthew both work in the music industry (the groom is in the band Madina Lake) which is how they first met. Despite living on opposite sides of the world, the bride in the UK and the groom in America, that didn't stop them dating!

In doing their initial research, Sarah and Brian quickly started to realise that for the price of a traditional package wedding at a hotel or resort, they could instead piece it together using the people, places and things they already loved. “Using our everyday favourite things as inspiration for our day made decisions easier and the wedding itself feel authentic and real.” said Sarah.