If you’ve been hoping that one day I might blog a real rock star’s wedding, then today your wait is finally over. In fact I’m not sure weddings can get more Rock n Roll than this! George and Adam’s ceremony was small and intimate, held in Central Park on Cherry Hill and the reception was at The Cutting Room which is owned by Ronnie Wood of The Rolling Stones. 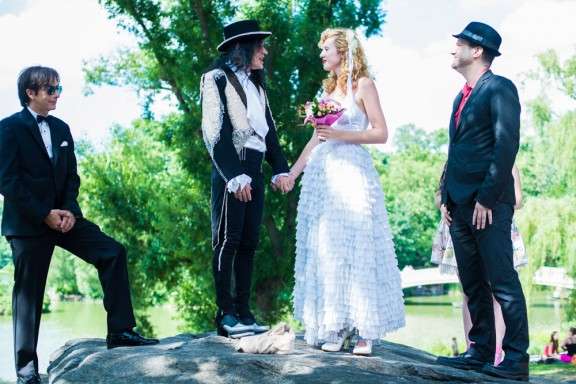 Those hardcore rockers amongst you might recognise the groom. He is none other than guitarist and singer Adam Bomb. Marrying a rock star clearly has it’s perks as George and her bridesmaids all wore Betsey Johnson dresses personally loaned by Betsey herself! “Adam’s drummer Bobby introduced me to Betsey Johnson”, she explained. “Bobby told Betsey about the wedding and Betsey generously let me pick a one of a kind dress from her collection. My shoes were also very special one of a kind personally custom made for me by a very close and talented friend of mine Ambrosia Sullivan.” 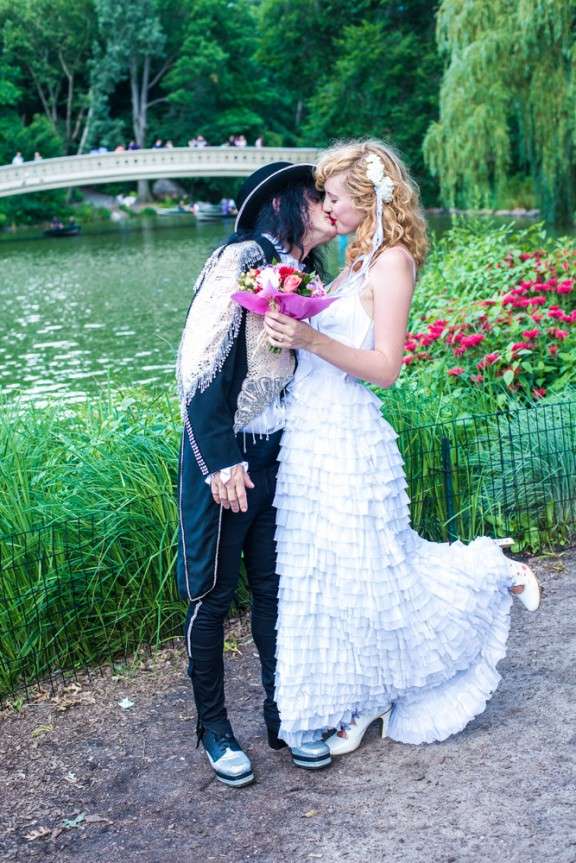 “We met Christmas Eve, 2011”, George continued. “Adam had a party at his Times Square apartment and a good friend of mine who is also a huge fan of Adam’s band asked me to join him. He had been invited by Adam after booking his band for a show in NYC and he knew I would love Adam’s music. Later that night Adam sang me a song he wrote in the 80s called ‘You’ll Never Know’.” 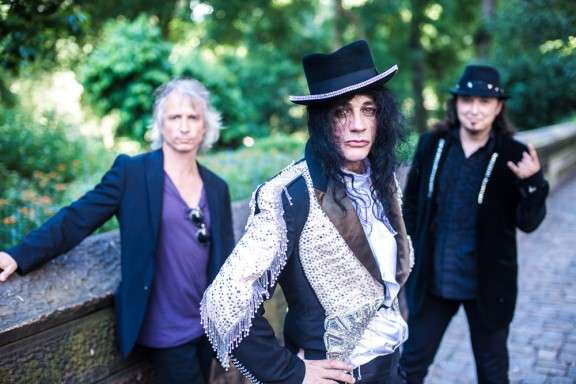 “The wedding theme was obviously very Rock n Roll. t was unconventional and it was important to us to be outside under the sky, surrounded by nature. Cherry Hill is an area that I often visit so it was the perfect place for our ceremony. The thing that made our wedding most unique was the moment I arrived. Adam had climbed on a rock and was playing the wedding march on his electric guitar, accompanied by Adam’s 12 year old daughter Blaise, my Flower Girl. I climbed up beside him and we recited our vows.” 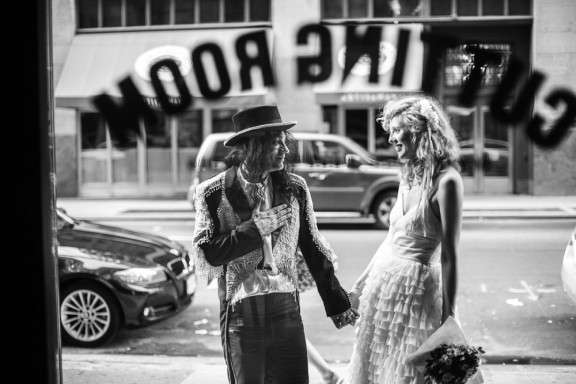 “One of the most significant moments of the wedding was when Adam sang a song he wrote for me called ‘My Girl George‘. The wedding overall was very inexpensive though and the food was the only thing we splashed out on. Being a filmmaker I have many talented creative friends that offered to photograph and film the day and we didn’t require a decorator or any flower arrangements as the park was already a beautiful backdrop.” 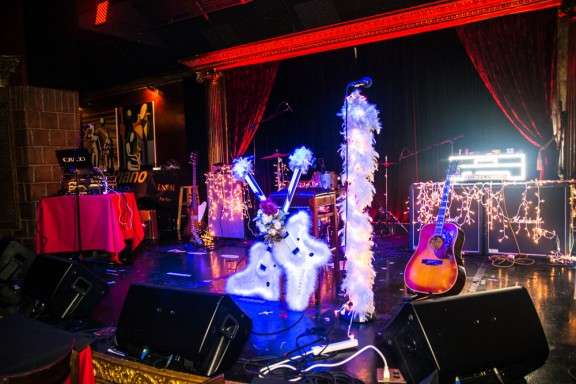 “There’s nothing I would change about our wedding”, she concluded. “The day was so perfect and really not all that planned. It naturally fell into place and was a magical day and night.” 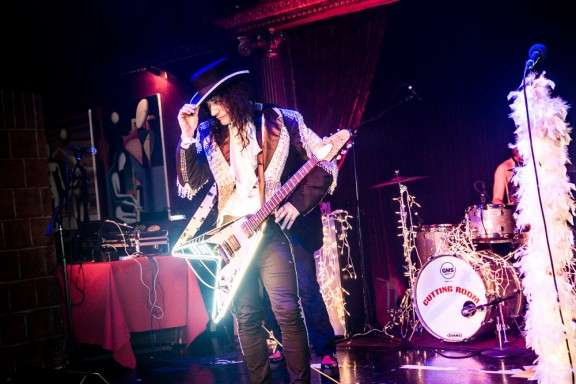 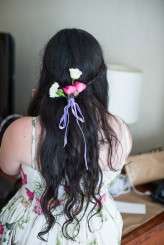 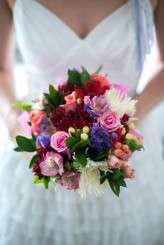 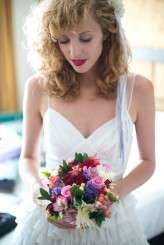 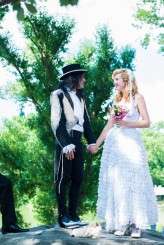 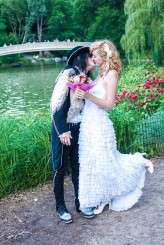 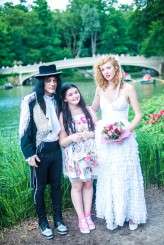 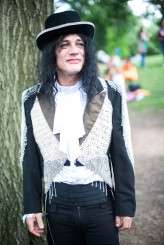 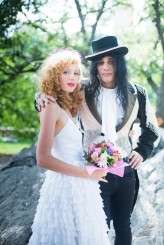 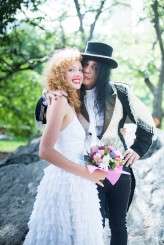 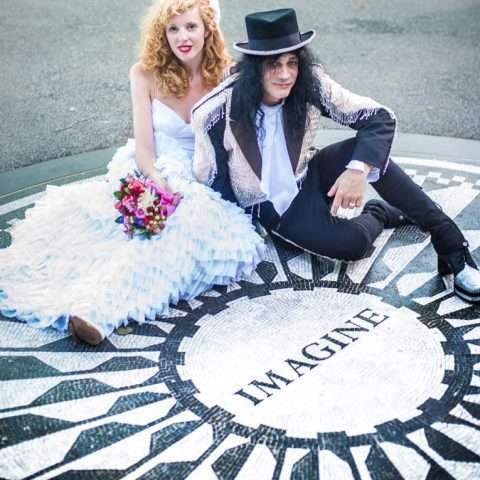 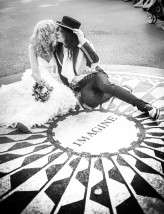 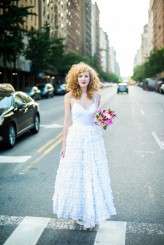 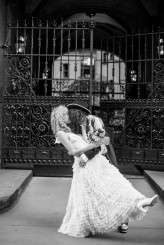 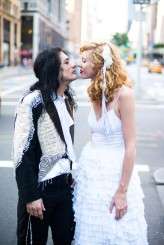 Year and a Day

Nicole and Brandon are both huge music fans so they wanted to incorporate music into as many details of their wedding as possible. From the invitations which were record and cassette tape designs, to the flowers made from sheet music and even the centrepiece which were all instruments. The favours were guitar picks, magnets, buttons and stickers and were set up like a merch table and the music that played throughout and the reception was a combination of guest requests (which they asked on the RSVP cards) and their own favourites

I have to say when I first laid eyes on Bodie & Beck's wedding I went all girlish and excited and started thinking very naughty thought about that party of groomsmen... I'm sorry, I'm sorry... but come on! How sexy are these boys? I even sneak peeked a shot of them on my facebook page (to share their beauty you understand) and... well... I've never seen so many smitten girls all in one place. It was pretty funny! So just when I thought it couldn't get any better, I saw the rest of the wedding! How gorgeous is the bride (hello tattoo envy anyone?!) In fact I just about cried with jealousy over how damn cool the whole thing is... and they are. I'm very professional indeed. I love this wedding more than life itself. Who's with me?

Are you ready to start the new year with a bang?! Oh boy am I! In actual fact I saved Gemma & Delaney's awesome wedding until today because of that very reason - I wanted to start 2013 as I mean to go on. Rock n Roll couples all the way baby! Gemma & Delaney were married in September at Rushton Hall in Northamptonshire. The elaborate backdrop worked so well as a contrast to their quintessential Rock n Roll and neo-postmodern 80s-inspired wedding. "We got engaged in Malibu in LA on holiday there a couple of years ago", began the bride. "It was a perfect sunset and totally spontaneous. Delaney had only brought the ring a few hours earlier from a gorgeous little antique shop in Santa Barbara. We were married a day after our 7 year anniversary."