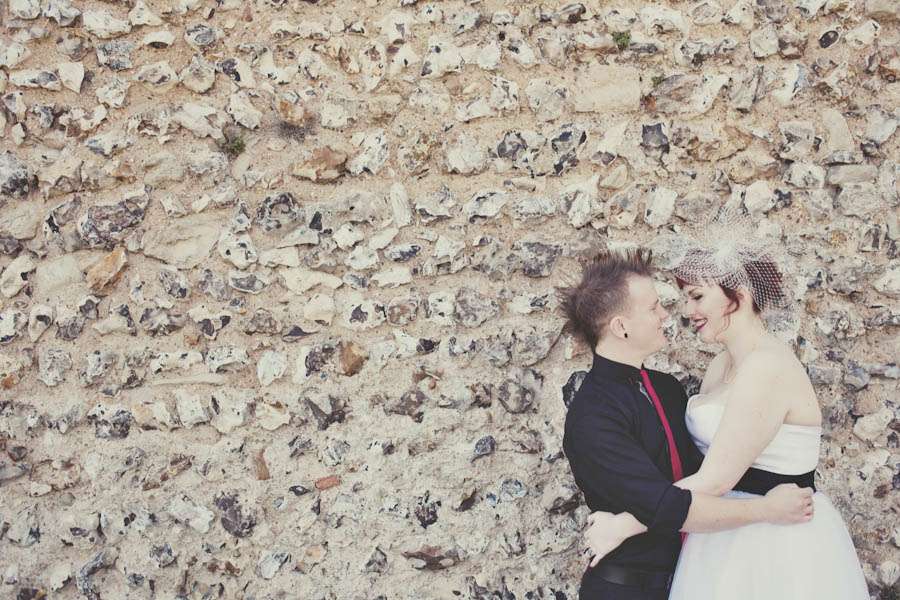 I’ve been looking forward to seeing and blogging Rachael & Aaron’s wedding for so long! So we first met when they came to a party I hosted for my blog readers. We were all nervous (especially me who had 200 people to talk to!) but I loved sharing paint pot cocktails with them and hearing about their wedding plans. Our paths crossed a number of times after that; at wedding fairs, at my blogging workshop and of course on Twitter! Rachael is probably one of my most loyal and awesome twitter followers! We spoke online so much they I really felt like I was a part of their wedding. That’s one of the most rewarding things for a wedding blogger like me! 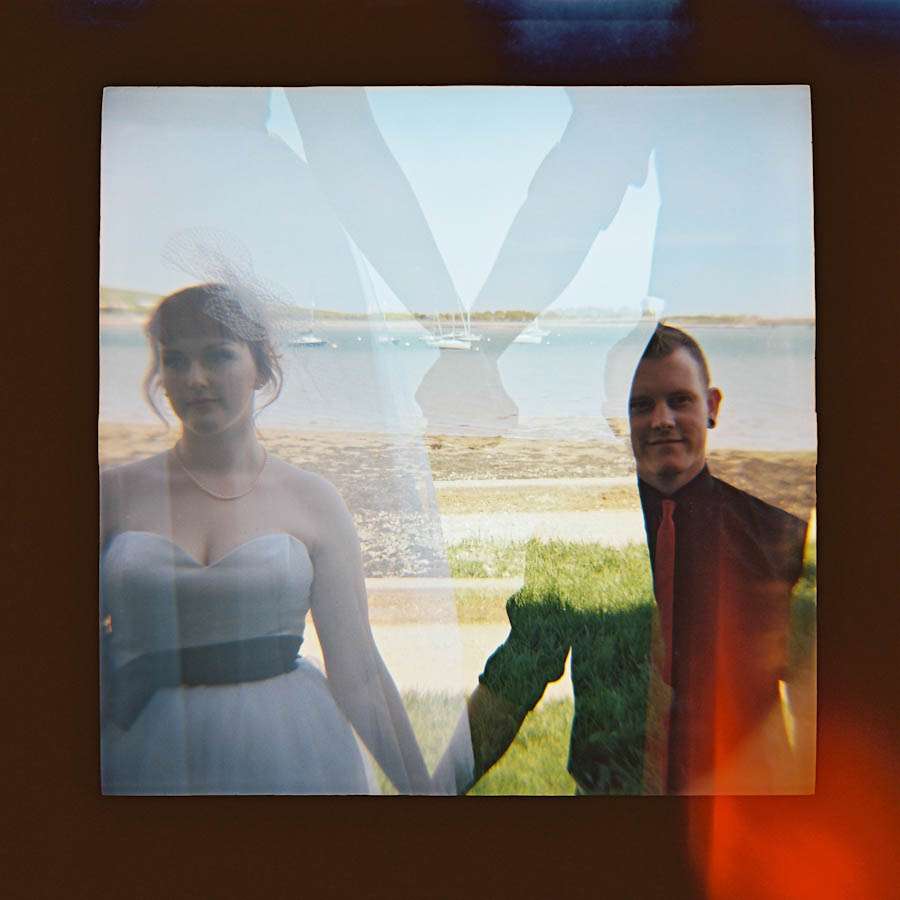 So needless to say I was literally dying with anticipation as their wedding drew closer. Luckily, they booked the amazing Lisa Jane to photograph their day, so I knew their wedding photographs would tell their story amazingly… even though I wasn’t there, I get a huge sense of who these two are as a couple from Lisa’s images. 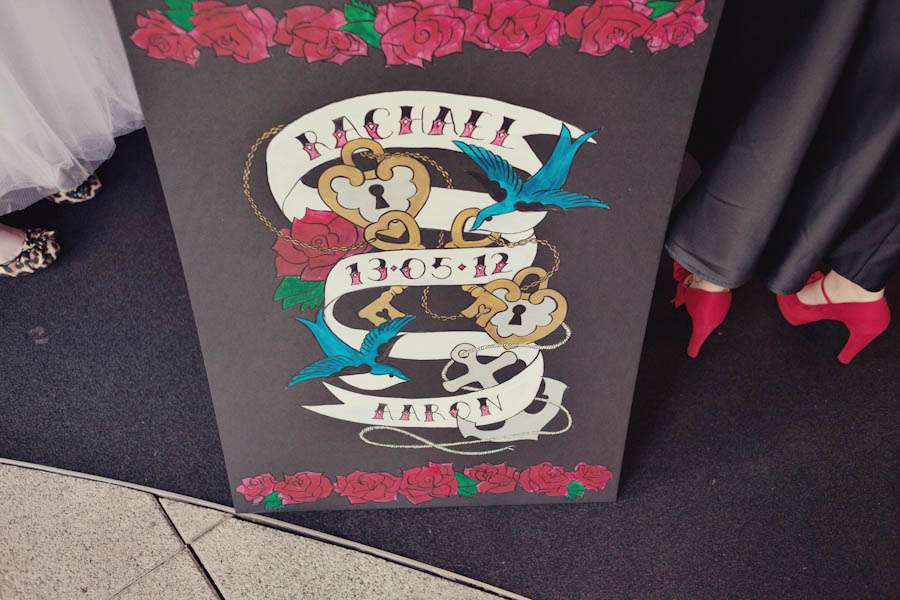 The wedding was held at Spinnaker Tower, Portsmouth in May. The couple used so many of my favourite UK wedding suppliers; Honeypie Boutique for Rachael’s dress, Janine Basil for her headpiece and Elbie van Eeden for her make up. Their cakes were made by the amazing Charlotte of Restoration Cake and Veronica Dearly created their bespoke paper goods and stationery. 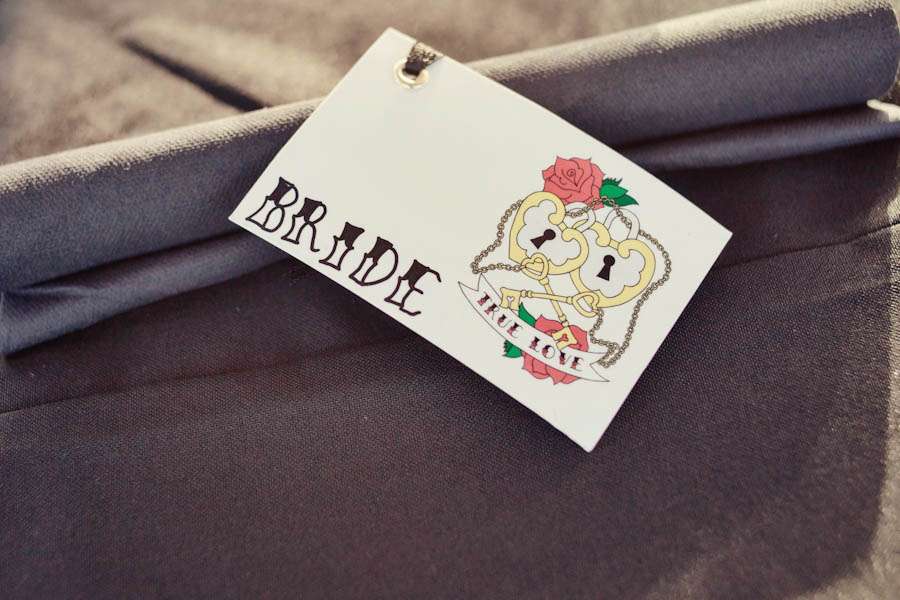 “We are heavily inspired by heavy metal music and tattoo culture in our everyday lives and also have a penchant for gothic, imposing baroque decor”, Rachael began. “Combining the two was always the plan for our wedding. I had been a regular reader of Rock n Roll Bride since finding the blog in early 2009 and so when Aaron proposed I started gathering inspiration from there. We were lucky enough to attend the Rock n Roll Bride Party in 2011 and found Lisa Jane doing the photography & Restoration Cake cupcakes there – done deal! Then, after seeing Ronnie & Craig’s wedding featured on the blog, I knew she was the gal to do our invitations; consequently a beautiful friendship blossomed! Meeting and making friends with such amazing suppliers is an unexpected bonus of wedding planning! Everybody mentioned how ‘us’ the wedding was. It always pays to stay true to yourselves because all your loved ones will understand on the day!” 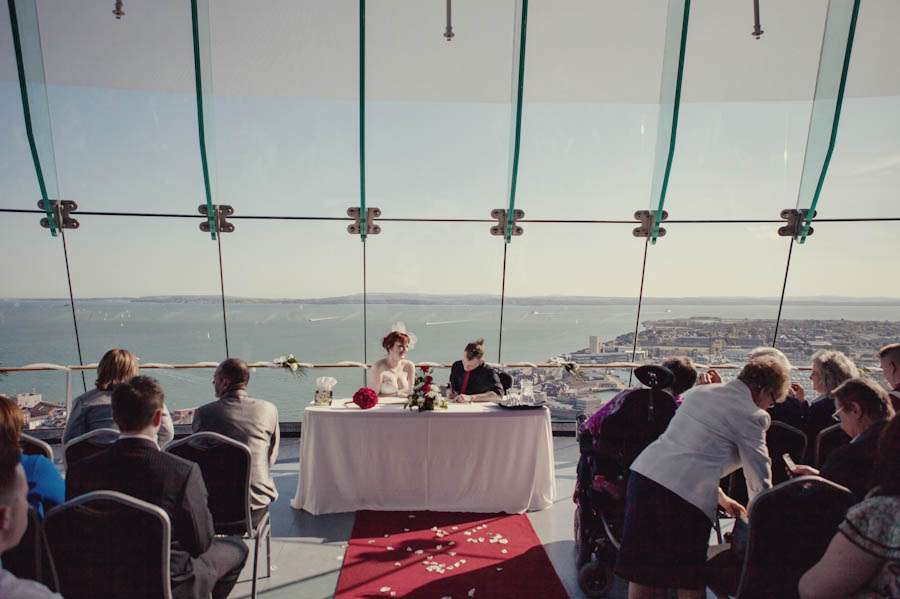 “We chose our unusual venue because we wanted something memorable”, Rachael continued when I asked about the specific wedding details they chose. “The views of the sea and surrounding area in the sunlight provided a beautiful backdrop for the ceremony. Being able to be legally wed at 344ft up in the air was pretty awesome too!” 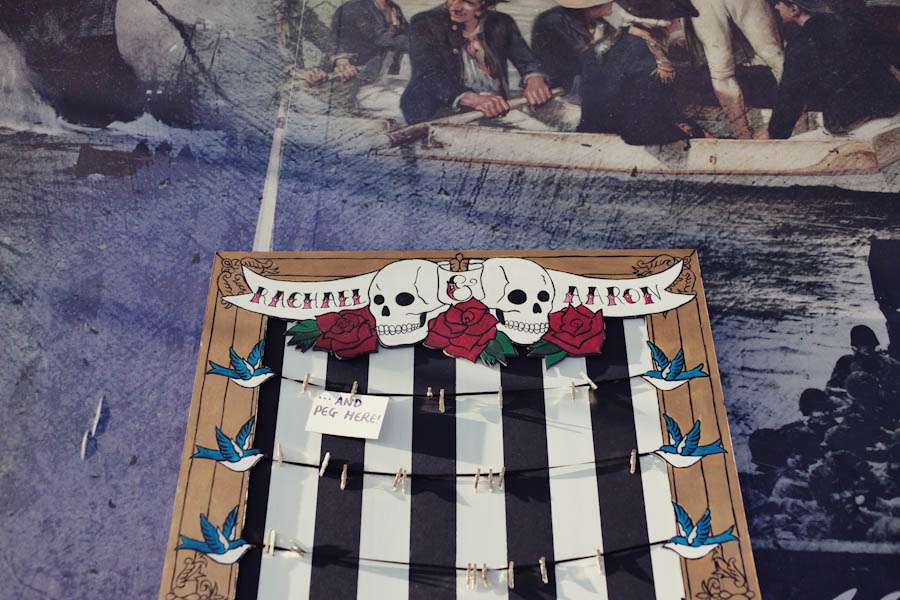 “On the invitations, we advised our guests to bring either ear plugs or air guitars as we played only heavy metal from 10pm! Food wise, we knew we would have a BBQ and loads of chocolate – our favourite foods! We already had each other’s initial tattooed on our ring fingers but wanted rings as a sign of marriage. We decided on skulls for ’til death us do part’ and because we like skulls! I knew I didn’t want real flowers in my bouquet because they die and I wanted to be able to keep my bouquet afterwards, so after searching on Folksy I found some amazing ones made to look like roses using red ribbons.” 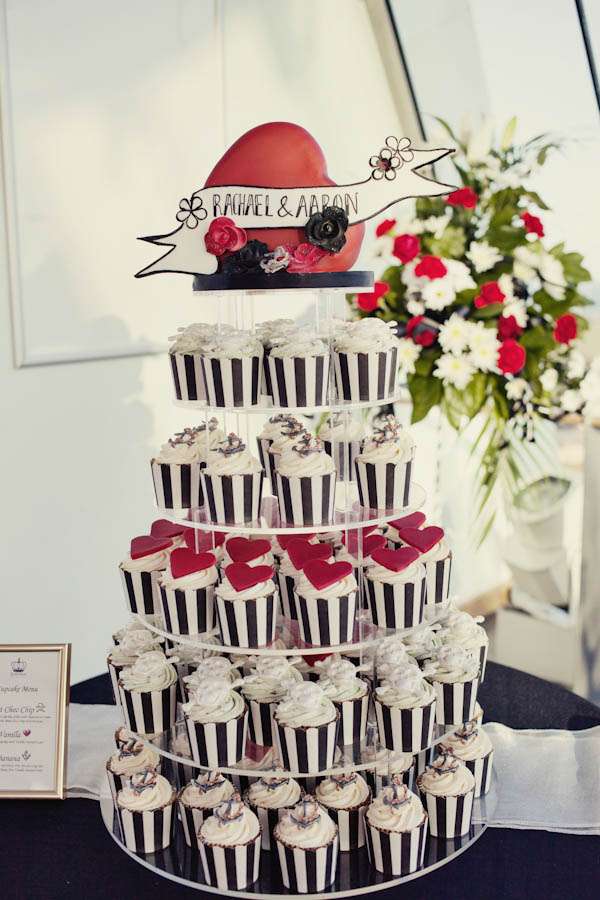 Just amazing. I’m so excited to finally see and share these images and of course I’m utterly humbled that my blog played such a huge part in this amazing wedding… 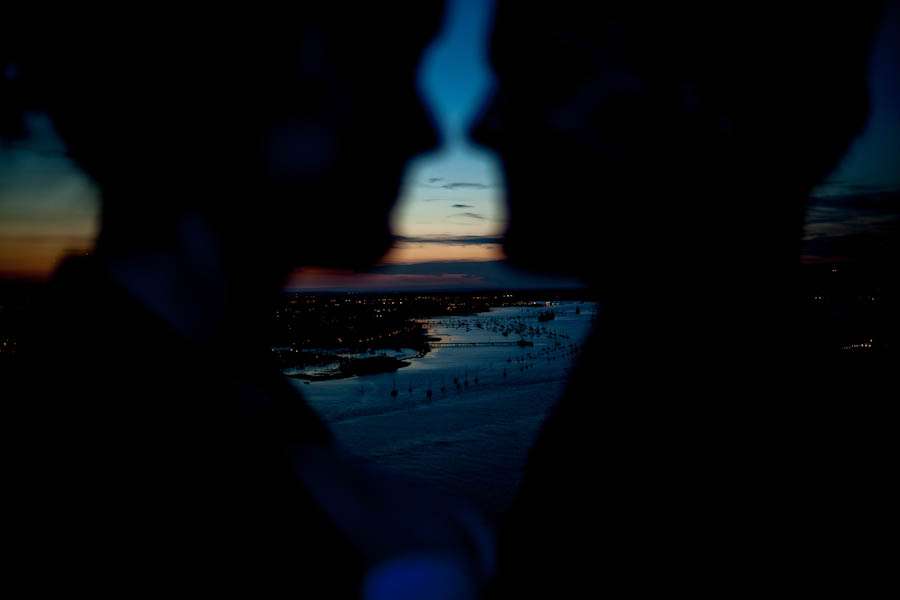 Huge congratulations to both of you. Thanks to you both, and of course the amazing Lisa Jane for sharing with us today.

And don’t forget that Lisa Jane is hosting a fabulous competition for you to win free wedding photography with her. If you’re getting married before the end if 2013 then check this out! 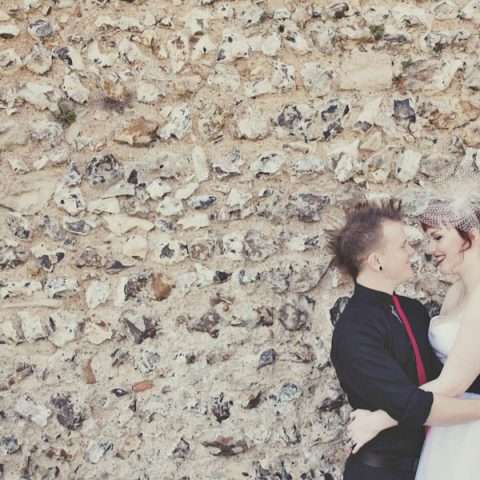 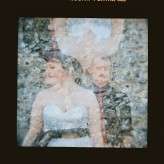 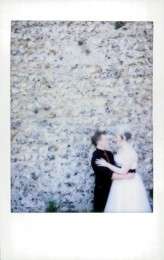 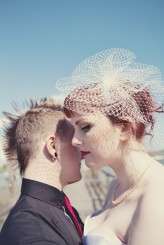 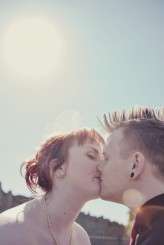 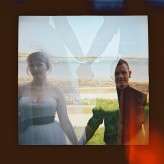 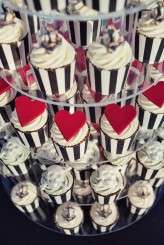 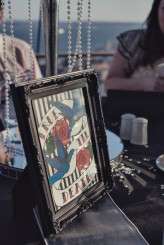 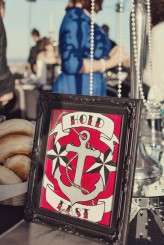 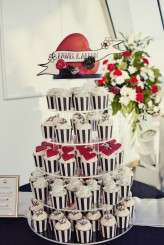 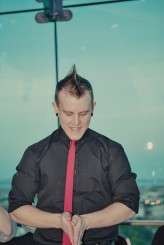 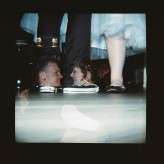