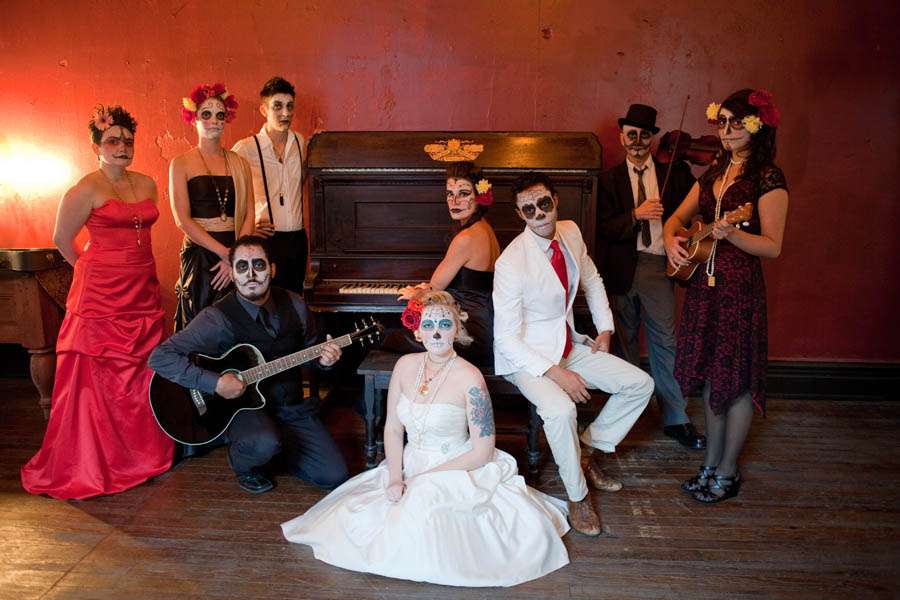 This scary Day of the Dead/Dia de la Boda de Los Muertos themed shoot won’t be for everyone but I think it’s pretty rad…For alternative make up inspo alone I think it’s worth a feature! 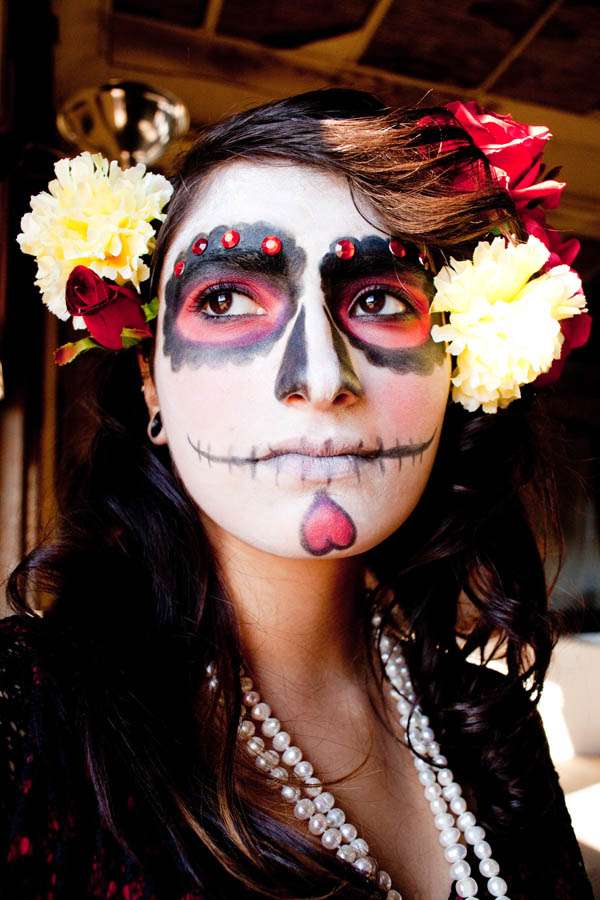 “This is a concept I’ve been pulling together for about six months,” photographer Gina told me. “Originally I had planned this shoot for October, but because I had no location to shoot it, I put it the back burner. Emily (the Bride in this shoot) was planning her wedding and showed me where she was planning to have her reception. The Harmony Club of Selma is an old Jewish Gentleman’s Club, and I fell in love with its decayed and macabre elements immediately. I rebuilt my concept around this venue and found friends, vendors, and models to come be a part of my dark make-believe wedding.” 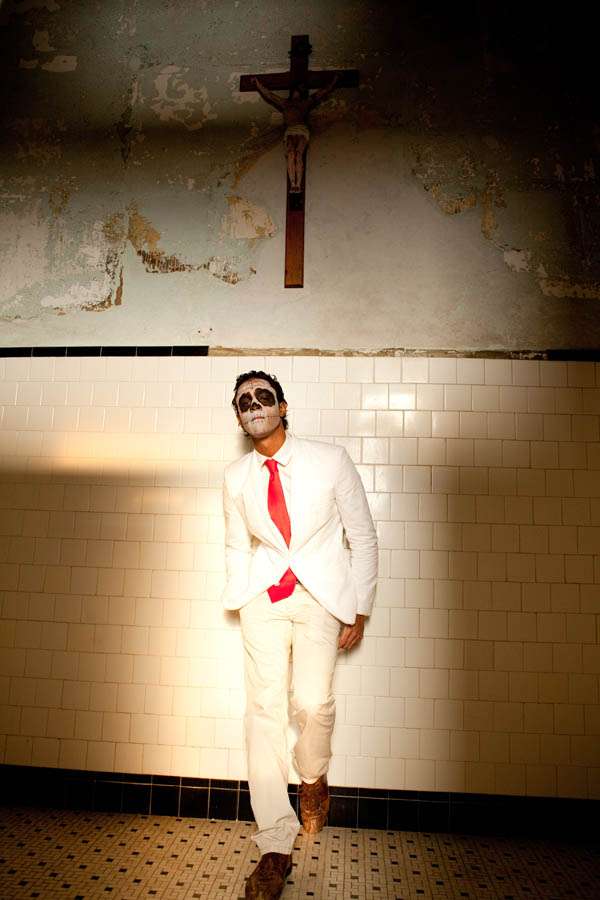 “A lot of the group shots look more like a new twist on the Adams Family than anything that may be considered bridal, but the concept as it played out my mind was that since this is the wedding day of the dead, they would perform the normal ‘ceremonies’ backwards. The dancing and revelry of the occasion is mixed with the fear and excitement of the couple.” 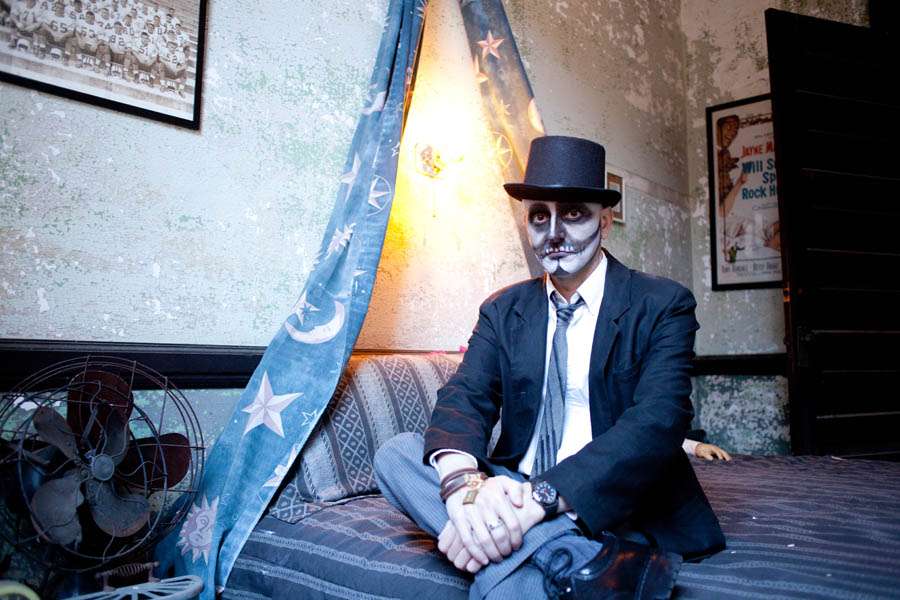 Thank you to Gina for sharing her shoot with us today. 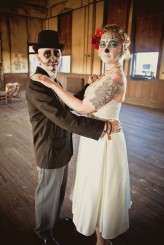 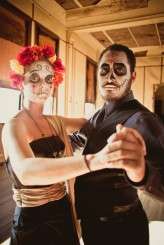 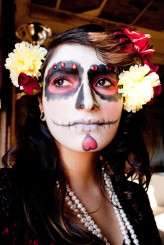 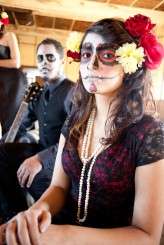 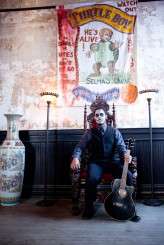 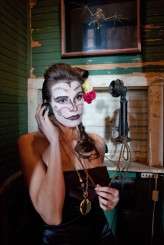 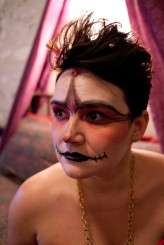 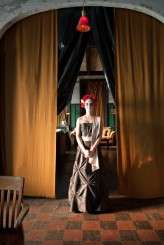 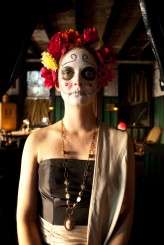 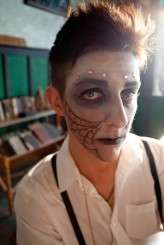 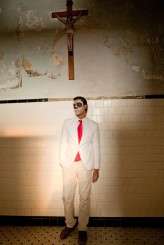 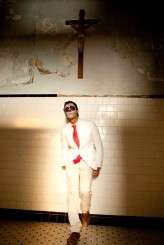 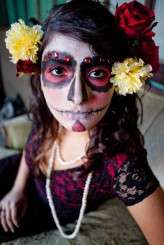 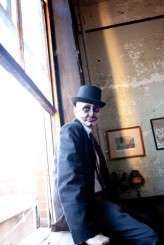 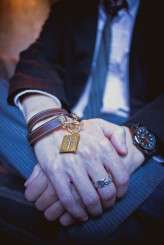 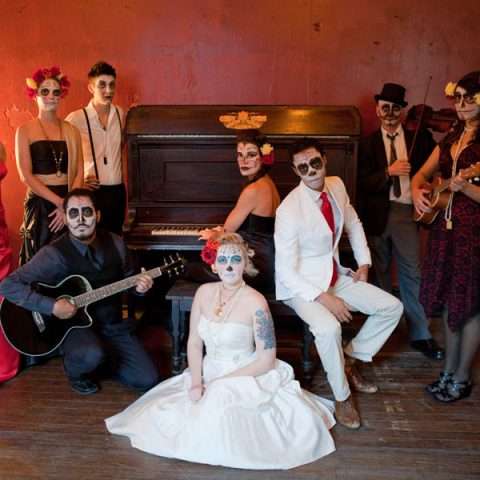 "Almost 2 years ago I saw a beautiful Día de los Muertos painting", photographer Ashley Forrette writes. "It was the first time I really looked at anything Day of the Dead-related that was not a kitschy nicknack or halloween costume sold at Hot Topic, but actually a really beautiful piece of art. It was soft, and feminine, and dark… romantic even. I fell in love and immediately I knew I wanted to someday shoot a bridal photo session inspired by that painting."

Happy Halloween! I hope you have something suitably spooky planned? I'm actually out and about shooting all day, but I'm hoping I can get home in time to catch some trick or treaters later! To get you well and truly into the spirit of things, I'm going to share not one, but two, amazing Halloween-inspired wedding photo sessions today. Now, I know I said on Facebook recently that I was kinda over styled shoots, but there are always exceptions, and two I have for you today are definitely worth breaking my self-imposed rule. Pop back at 3pm for the second one. It's totally worth it, I promise!

Happy Black Friday to my American readers! Well in lieu of actually having a shopping discount to share with you, I instead thought I'd share a bridal shoot with a slightly macabre edge (black - macabre .. see my tenuous link?) OK forget it... but either way, this shoot is friggin' ace and I'm thrilled to have it on my blog today.

Last week saw the third Photography Farm organised and hosted by wedding photographer Lisa Devlin. I was super excited to be invited along again to talk about blogging, to help style the shoot which we asked Roo to model for. Lisa, stylists Hannah and Jayne and myself have been planning this spooky Miss Havisham-esque shoot for a few months now so it was seriously exciting too see it all come together! Hannah and Jayne did an amazing job of creating a indoor/outdoor sets in the woods behind the farm. Roo also had a lot of input into the feel of the shoot as one of the great things about The Farm is that we try to make each theme relevant to the models. It would be a bit ridiculous plonking Roo in a vintage picnic set with cupcakes and balloons for example as that just isn't her!

Colour loving babes listen up! If you've been wondering if rocking a coloured gown on your wedding day was the right choice or not then I'm pretty sure today's incredible photo shoot will help you make up you mind. I mean WOW.

This pretty Great Gatsby inspired wedding shoot is the perfect way to ease you into the long weekend. I don't really feature styled wedding shoots on the blog any more (because, let's face it, real weddings are usually way better!) but I loved the use of colour and the elegant, yet totally reproducible, details in this one so much!