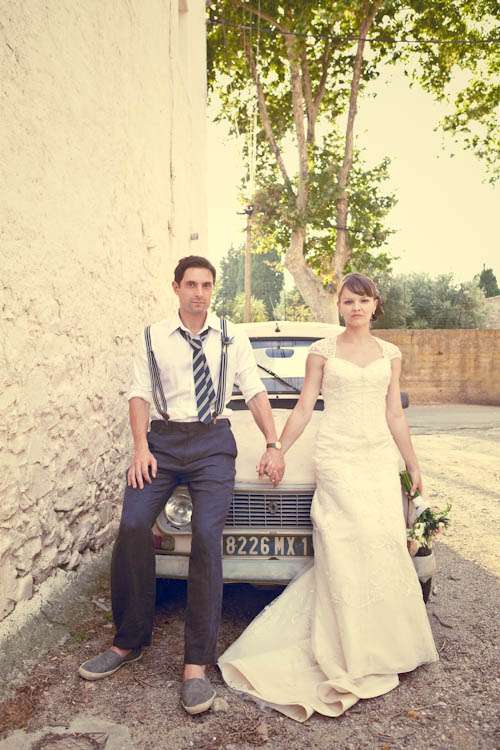 Daniel & Caroline were married in Chateau Puits es Pratx in Ginestas, in the south-west of France. The gorgeous surroundings provided the perfect backdrop to their rustic wedding.

“The Chateau is only a few miles from Dan’s dad’s house in a nearby town, so it is an area of France we have visited often and know well,” the bride told me. “We knew from the off that we wanted our friends to help us celebrate our wedding in this beautiful place and the Chateau fitted our requirements perfectly – cottages on site, and a self-contained venue for a long weekend of fun! We wanted the weekend to feel like a party in a stunning venue, with good company, great food and endless wine. Simple!”

“I worked closely with the team at the Chateau to organise the day. We met her twice, but most of the planning was done my email – the food, the flowers, the decor, everything. My theme was French rustic-glam and I sent her mood boards of my inspiration, details of what I was making and collecting, and she used her talents to pull it all together. As it was a celebration for our friends and family as much as ourselves, we wanted them to be part of weekend as much as possible. Our friend Hilary is a broadcast journalist and acted as the celebrant, which was very special. Other friends did readings and we made everyone sing a rendition of Stand By Me.” 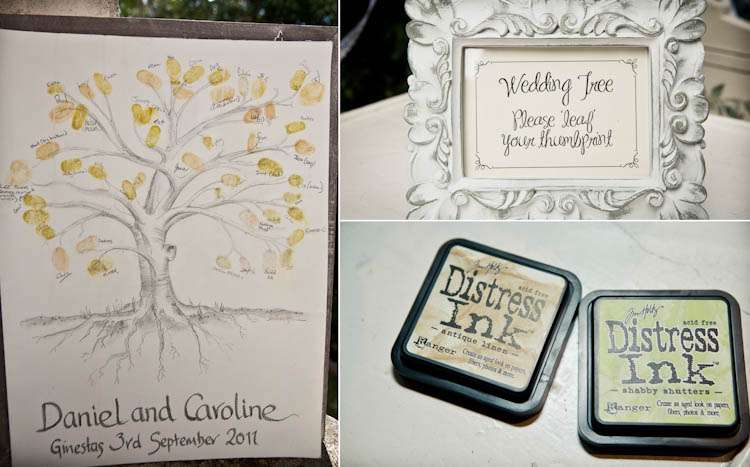 “Our only near-disaster was the wedding tree, which formed the central part of the ceremony. I’d had it printed in England before we left, but didn’t realise it had been damaged until about three hours before the ceremony. Luckily our coordinator has a degree in Fine Art, immediately picked up her pencils and drew the most beautiful tree as a replacement. I was very, very touched. The tree was framed and placed on an easel for the ceremony, pencils attached with lace. We put our thumbprints on the tree during the ceremony, as did our parents, with the guests adding theirs during the course of the day.” 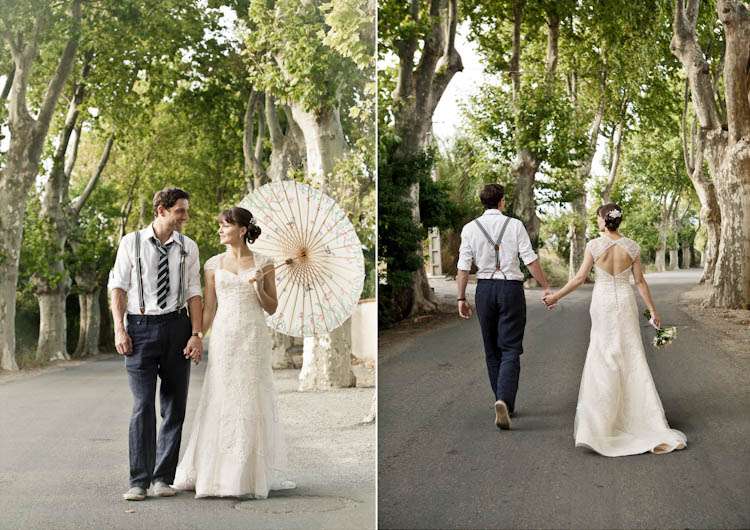 It was important to the couple that their friends and family were as involved as possible with their day. “My mum stitched a swag of fabric for the arch we married under, which was fastened with bunches of flowers and a chandelier I bought on eBay,” Caroline continued. “Vintage paper parasols – again, sourced on eBay and flea markets – were provided for the guests. I drew the chandelier for the Order of Service cards which were designed and printed by my twin sister, Kelly.” 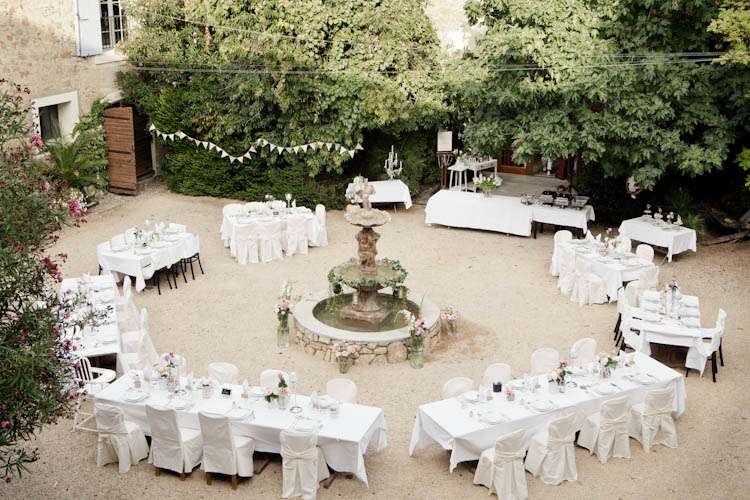 “When I walked into the courtyard for the wedding meal I was blown away by how beautiful it looked. The team at the Chateau had made it look incredible. Jugs and glass bottles filled with flowers sat on each table, and the lighting was stunning. There were candelabras hanging from the trees, fairy lights woven through the branches and Chinese lanterns strung high above the tables. I drew a lot of my inspiration for the table decor from the local area, and I was keen to use mini-blackboards, like in the markets. I found some pretty fabric-trimmed ones from Gisela Graham which were placed on mini-easels for the table numbers. Ironically, the French soap favours were bought at my favourite shop, RE in Corbridge, and not at the local market in France as planned! They too perfect to resist.” 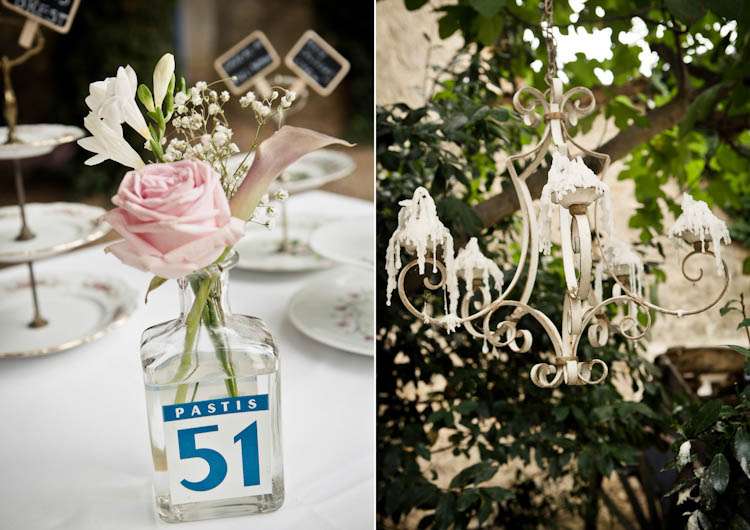 Food and wine was a big part of the weekend so the couple decided to provide two meals on the wedding day. “The first was a pre-wedding picnic which was held in the garden at the Chateau. We brought charity-shop sourced blankets from the UK and bought picnic baskets from the local market in Olonzac which were filled with home-made quiche, cheese muffins and salads, served with wine spritzers and jugs of beer. The parasols were put to good use by lounging guests as it was very hot in the midday sun. Other guests played boules and splashed in the pool. It was everything we had imagined – good friends having a good time together.” 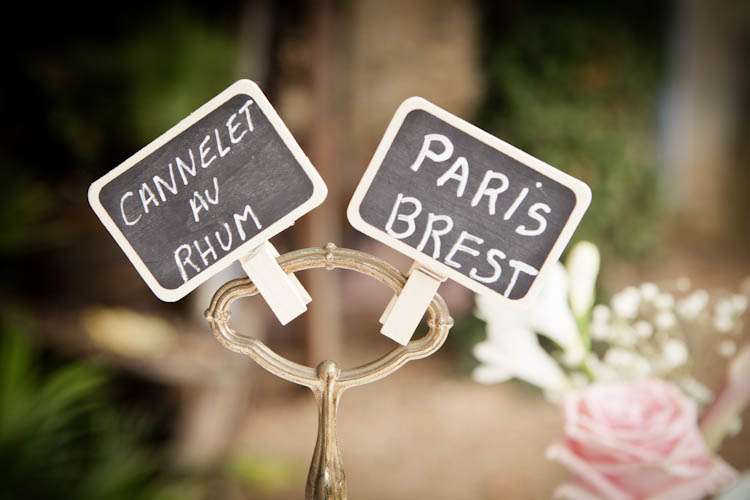 “The wedding meal was a buffet spread of suckling pig followed by a ‘buffet of desserts’ presented on vintage cake stands and mini blackboards I bought from a little shop in Seahouses, Northumberland.” 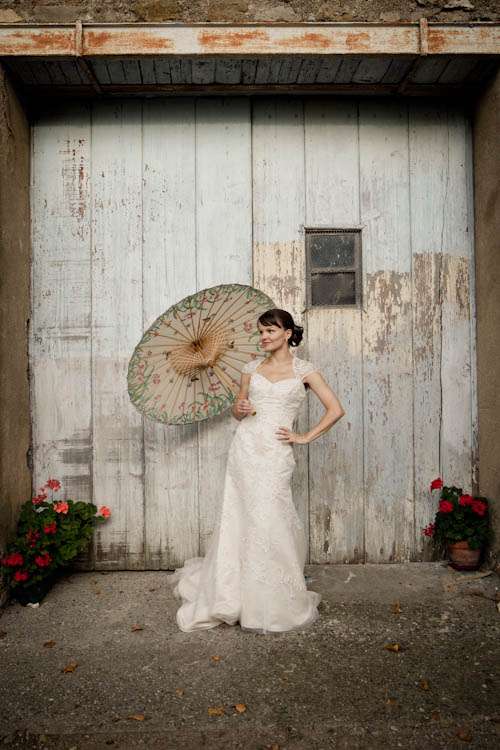 Stunning! Thank you to Daniel & Caroline and their photographer Heather for sharing with us today. 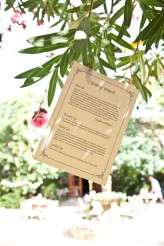 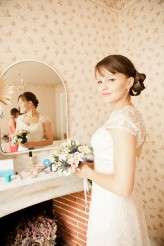 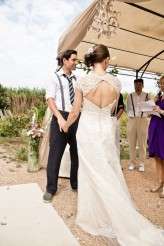 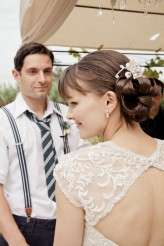 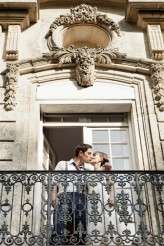 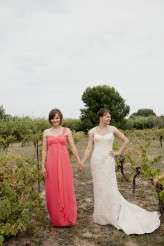 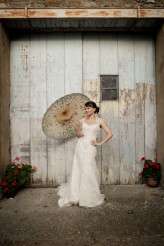 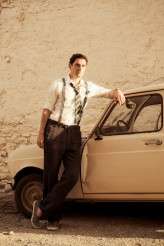 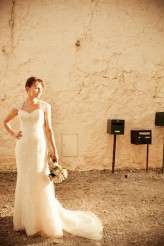 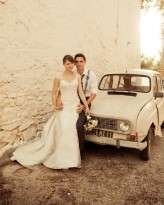 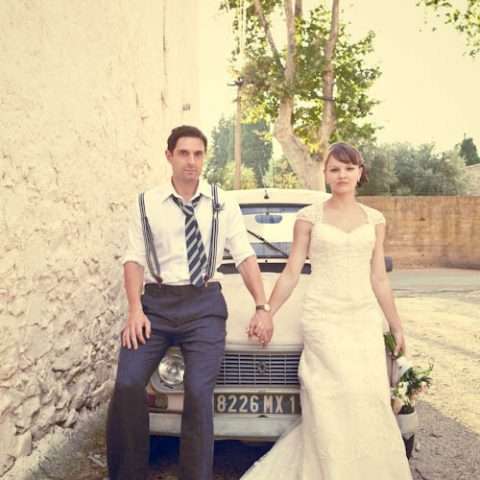 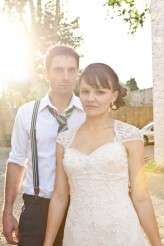 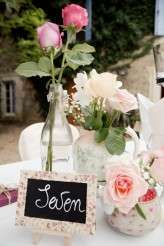 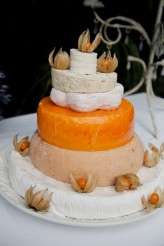