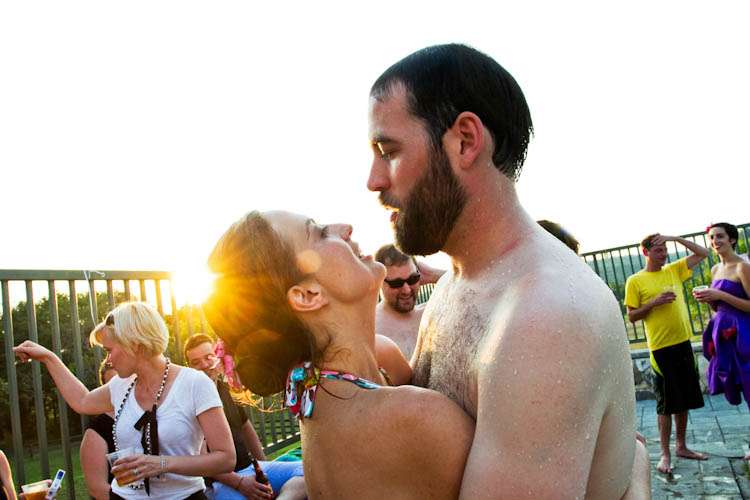 Carmen & Gary had a laid back pool party wedding at Commons Ford Ranch, Austin. The couple actually had their first dance in the pool too!

“The reception was supposed to be a dance party on the patio, with possible swimming as an afterthought, as there is a really nice pool at the ranch,” the bride told me.  “However as soon as dinner ended, guests were taking over the pool.  We decided to move the DJ over to the pool deck since that was where the party was happening, and it became a full-blown pool party.  We even had our first dance in the pool, after the official marital cannonball.” 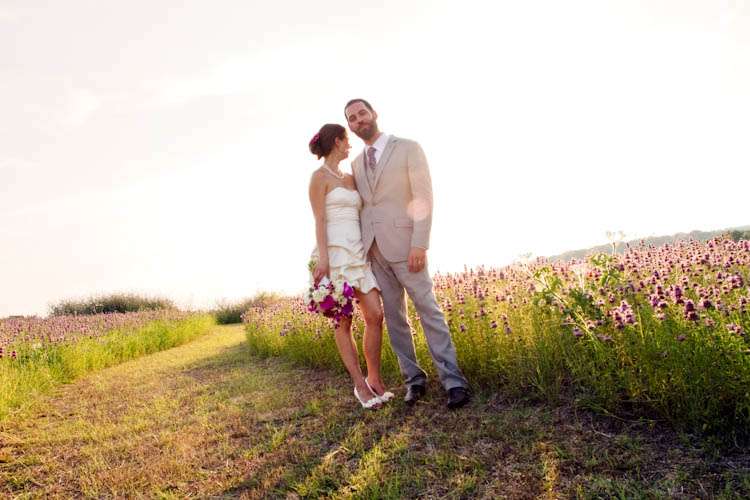 The bride wore a gorgeous short and ruffled dress which she found at Bianca Luce Boutique in Pasadena, CA. Carmen explains “I didn’t buy it at first, thinking I should try on more dresses, but when I walked into an actual bridal boutique across the street, I practically ran out the door and across the street to get it before anyone else had the chance.  The traditional princess wedding dress was not for me.  I also bought my poofy veil here.”

The couple also chose to use local businesses instead of playing a fortune to ship things in. Their flowers were sourced from the Arnosky Family Farm and their invitations were by local designer Lucky Onion who they found through Paper Place in Austin. Their vegan cupcakes were made by Sugar Mama’s Bakeshop. 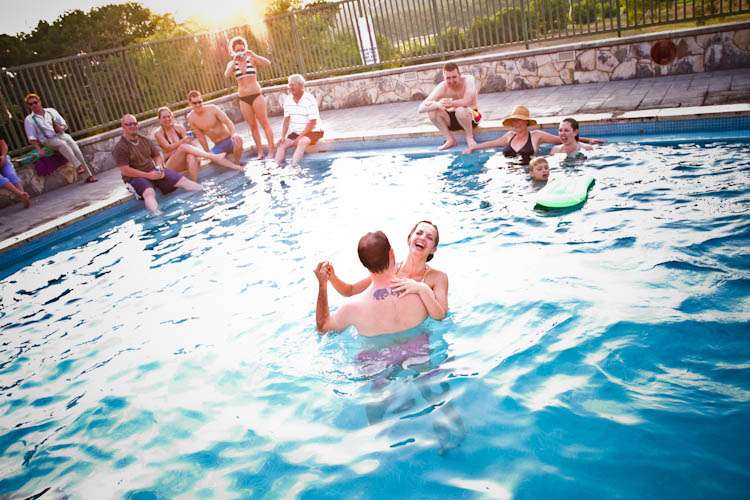 “It was very important to Gary and I to have our fingerprint on every aspect of our wedding,” concluded the bride. “Corporate wedding establishment vendors didn’t interest us at all, so we asked around and found vendors through recommendations from our friends.  We were able to design every aspect of our wedding just as we wanted, and everything turned out perfectly!  We involved family, friends, and friends-of-friends for almost everything: officiant, dj, rings, bartender, party bus rental, and the list goes on.  Those we didn’t know before-hand, like the floral designer and flower farmers, were small and personal enough that they sort of became friends.  Carefully choosing all the details really made every aspect of the wedding meaningful for us.”

“I took advantage of the opportunity to delve into some fun creative projects and learn some new crafty skills.  Like I mentioned, I appointed my friend Candace chairwoman of the craft committee and we undertook projects like making decorations (brightly colored tissue paper puffs) and creating and stuffing goody bags for out-of-town guests.  Our most successful and labor intensive project was screen-printing wedding programs with an image and a poem.  They turned our beautifully, and I learned a new skill/art.” 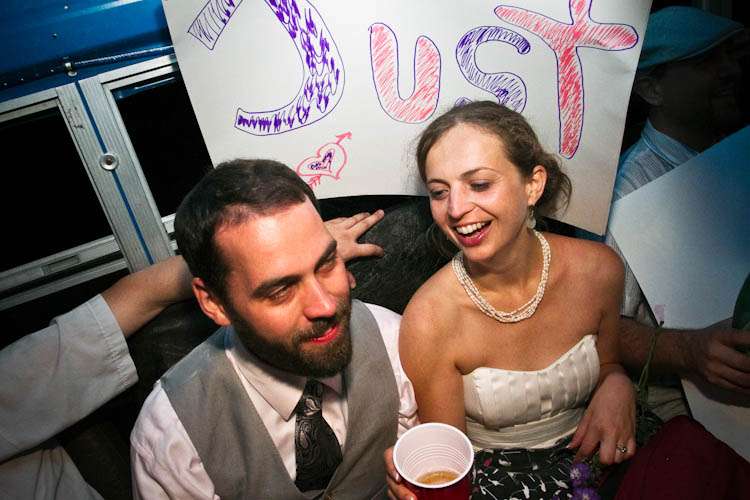 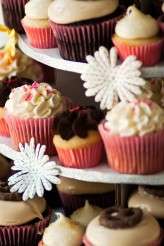 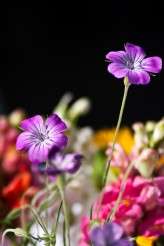 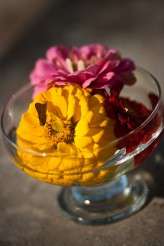 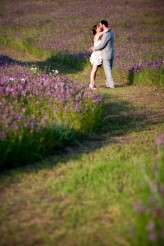 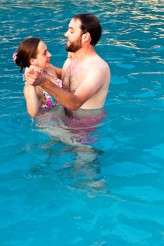 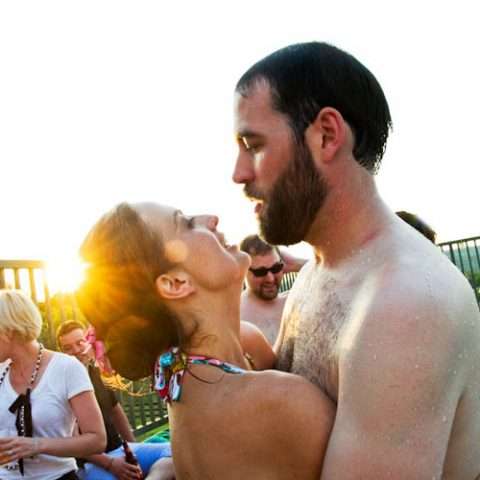 I've got another couple that you might recognise adoring these pages this afternoon. Do you remember this incredibly gorgeous vintage, floral and tattooed bridal shoot? Well the wedding to go along with the stunning shoot is just as visually gorgeous. Charly & Kelly has a beautiful back garden wedding in June at the bride's parent's home. The couple were married at 7pm by Lisa Torti, a mutual friend who had introduced them. They filled the garden with twinkly lights, giant pink bows and candles. The bride started collecting candy, cupcake and valentine themed items early on in the planning to use as decorations. The awesome spider candle holders used as centrepieces were purchased during Halloween, to which she added pink and red bows. The invitations were made by the groom’s aunt and included a vintage valentine that was used as the reply card.

I find it so interesting to see how different the same venue can look depending on the wedding. I've featured a wedding at the amazing Victoria Baths in Manchester before, but apart from the obvious similarities (like the big empty swimming pool!) it could be a totally different venue. Lynsey and Greg added lots of greenery and overgrown foliage to the mix, creating a completely different vibe from the cute, quirky and colourful wedding I've shared from here before.